Just south of Port Appin in Argyll is a coastal arch called Clach Tholl (in Gaelic, meaning ‘the rock with a hole in it’).  But far from being washed by the waves, it stands a good 50 yards or so from the shore, well above the high tide mark.

So how did it get there?

At the end of the last Ice Age, about 11,000 years ago, the land was finally free of the heavy burden of ice.

Just like a piece of rubber rebounding after being squashed, the land slowly began to rise.  The ice sheets were melting and sea levels were also rising, but the uplift in the land was far greater.  As a result, some of Scotland’s beaches and coastal cliffs, including the arch of Clach Tholl, were left high and dry.

A few miles to the south, the Dog Stone (Clach a’Choin), is another example of the same process.   The Dog Stone is an isolated sea stack just below Dunollie Castle near Oban.  According to Celtic mythology, it is so named because this is where the warrior Fionn MacCumhail, leader of the legendary Fianna, would chain his dog, Bran.  (This is the same Fionn MacCumhail who ate the salmon which had feasted on the hazelnuts of wisdom… you can read more Under the Hazel Tree!) 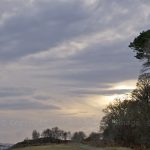 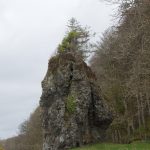 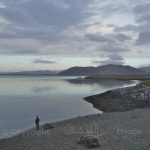