In the spring 1981 edition of ‘The Kist’ (the Journal of the Natural History and Antiquarian Society of Mid-Argyll), there is an enchanting story. It’s written by Dilys M Hooton, who was evacuated to Knapdale with her two small children during the Second World War.

At dusk on a Sunday, during the winter of 1941, Dilys was walking along the lonely road that follows the east shore of Loch Sween all the way down to the Sound of Jura. She was, in fact, returning to Kilmory Knap from Creag a’Mhadaidh Farm, about four miles away, where she had gone to fetch some milk for her baby.

The light was fading as she passed the abandoned settlement of Doide, now little more than heaps of stone in a roadside field.  Soon she became aware of an odd sound which she describes as a short cadence of notes, occurring every now and again. She wrote: “I kept stopping to hear it better, then there was silence and as soon as I moved on again and my footsteps were sounding once more on the road I’d hear it again… it seemed in the air, without direction, a far sound yet coming from nowhere.”

Puzzled, Dilys continued to hear the notes sporadically, about 20 or 30 times. After she had passed beneath an outcrop of rock, the sound stopped. She knew no one whom she could ask about it, and she forgot the whole incident until about 12 years later, when a local man, Dougal McTaggart, shared some folklore with her mother. When Dilys was told the story, she knew exactly what it was that she’d heard. 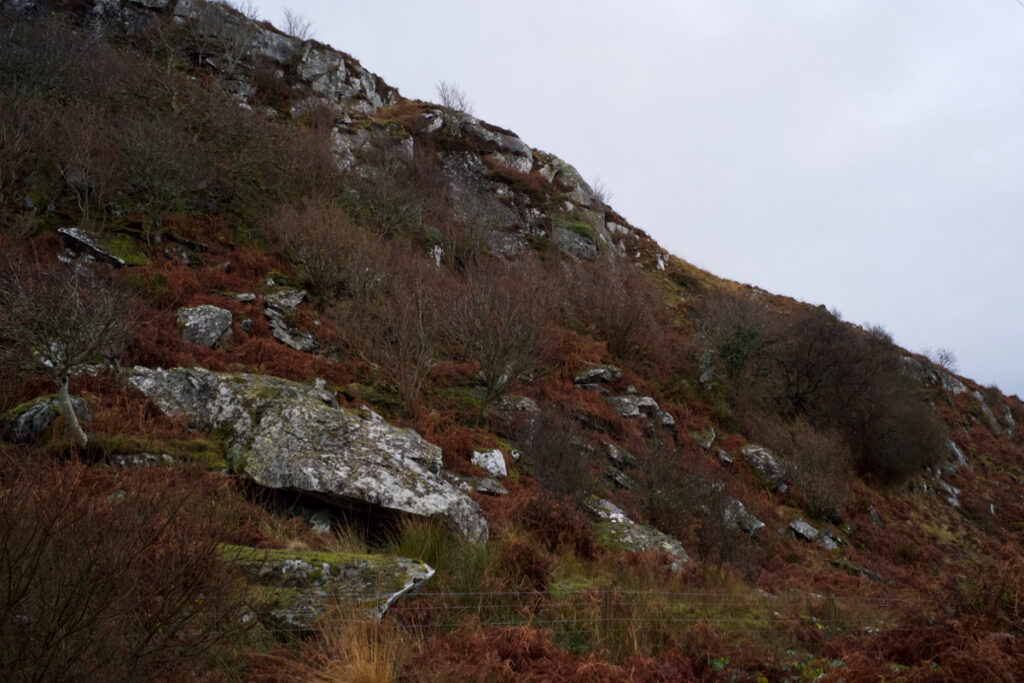 According to Dougal, a fairy portal was known to exist in the short but steep rock-face on the east of the road, just at the foot of the hill leading to Kilmory Knap. It could be located by looking for an old milestone, which was an upright slab about two feet high; in the 1920s, it had the words ’18 miles to Lochgilphead’ painted on it, but the lettering had since faded. Almost directly above this milestone was the doorway. It consisted of a recess capped by a long flat stone, like a lintel, and on either side were upright slabs of rock that looked like door-jambs.

Dougal explained: “This door is called Cachaileith na Sith* and is a way into the hill for the Good People who may dwell there. A tradition exists that They are sometimes heard singing.” He admitted that he himself had heard the ‘Wee Folk’ singing, and knew others who had experienced it too. But he warned that it was a rare occurrence. “You have to be right and the time has to be right,” he said.

*The gate of the fairies

In a later edition of ‘The Kist’ (volume 85, 2013), Pat Doughty, a resident of Kilmory Knap, quotes from an interview with Donald Shuttleworth, whose grandfather used to farm there. Donald remembered that, when he and other local people passed the fairy door, they would whisper “God protect the Wee Folk,” or “God bless the Wee Folk.” He believed absolutely in their existence. An old man with the surname McTaggart – possibly a descendant of Dougal – called them the sìorraidhs, which Pat translates as ‘the ever-living ones’. 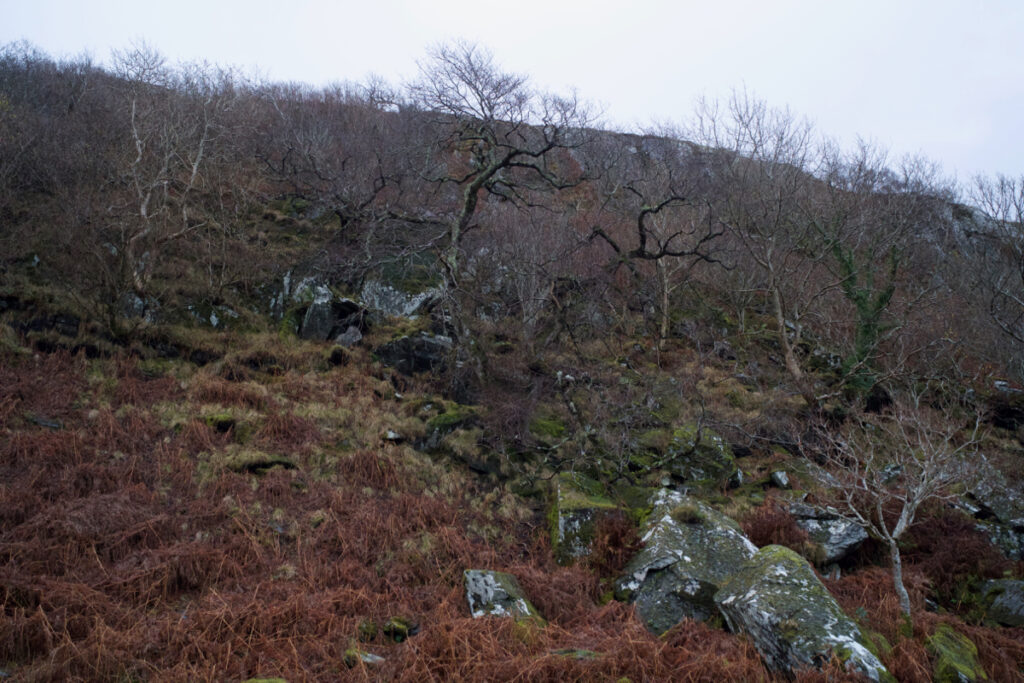 Above:  Wooded hillside by Loch Sween.  Willows, birch, hazel and mountain ash are plastered with lichens, and stunted or contorted by the strong winds.   Below:  Kilmory Bay 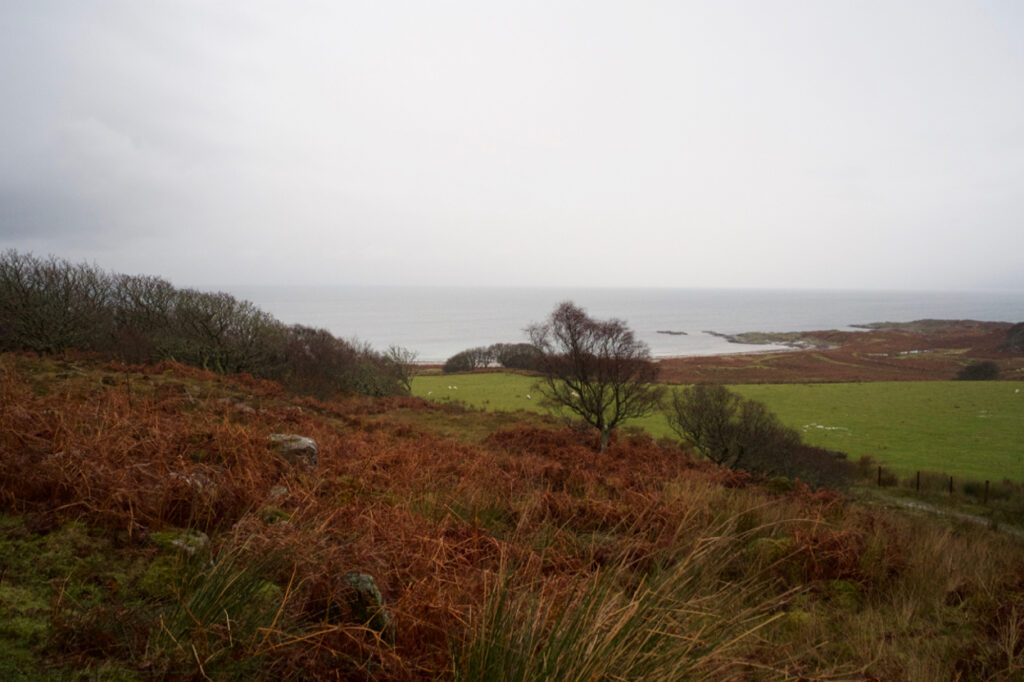 We know the Loch Sween road well, having driven down there many times on our explorations around Kilmory Knap and Stronefield. But never did I realise (how could I?!) that we were blissfully bypassing a fairy door. Last summer, which was when I first read about it, we hurried off down there to look. What were we hoping to find? I think I was genuinely expecting to see a rectangular opening, just like the one drawn by Dr F Severne Mackenna in ‘The Kist’ of 1981 (not reproduced here but you can find it in the reference links).

Sadly, it wasn’t as easy as that. In July, the hillside was choked with bracken, ivy and brambles, and garlanded with honeysuckle and wild roses. It looked lovely, but the rocks themselves were largely invisible. We made a note to come back in winter, and the other day we did just that. It was a typical December day – colours muted, horizons blurred, low cloud misting everything with soft rain. The only living creatures visible were the sheep ambling freely up and down the road. Out in the loch, the MacCormaig Isles looked bleak and inhospitable, which was how St Cormaig liked them; I could just make out the dim shape of his chapel. 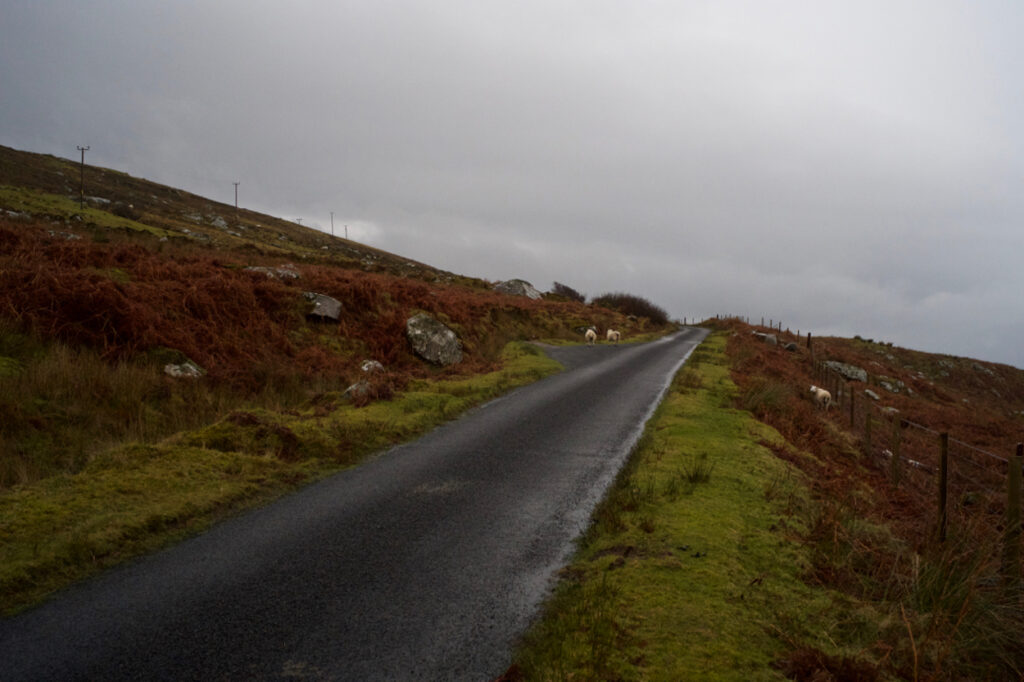 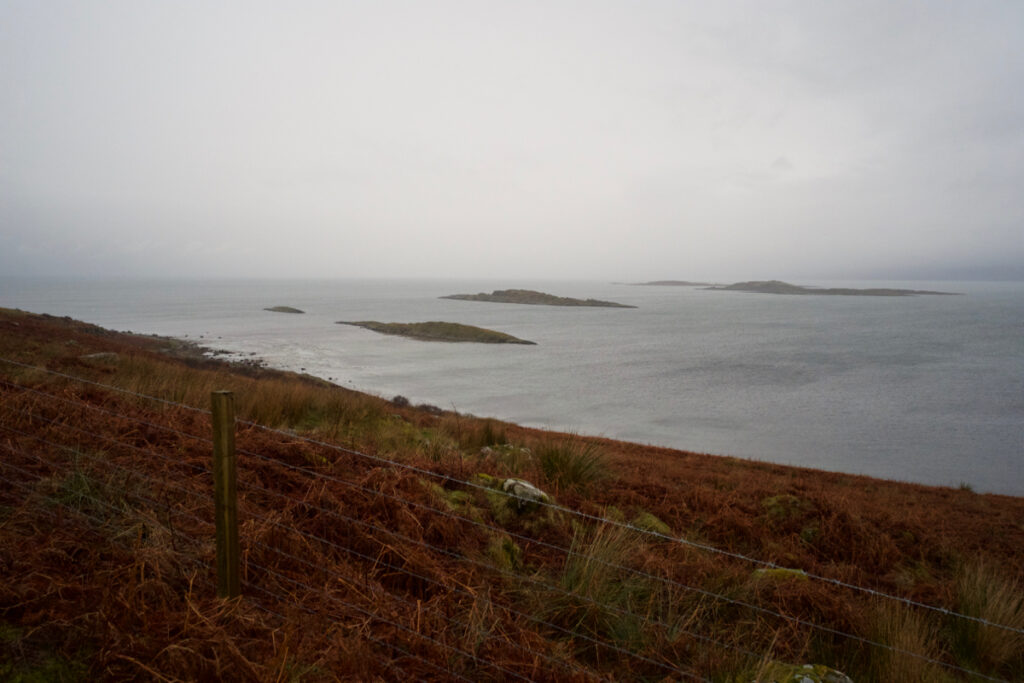 Above:  MacCormaig Isles.  Below:  possible milestone

In the roadside grass I found what I think is a remnant of the old milestone. It even looks as if it has a trace of lettering on it (more likely to be lichen or birds’ droppings, however!) But if this was the milestone, the fairy portal still didn’t leap out at me. Imagination can perhaps construct something that looks like a shallow ‘door frame’ of slabs (central in the photo below) – but it’s a very shallow recess with a visible back wall. (Is this my mistake? Can the fairies just progress through the wall? They’re not human, after all). Further up, and to either side, clumps of dead bracken and grass might conceal deeper hollows.  In fact, once you start looking, they all seem like gateways into the Otherworld! 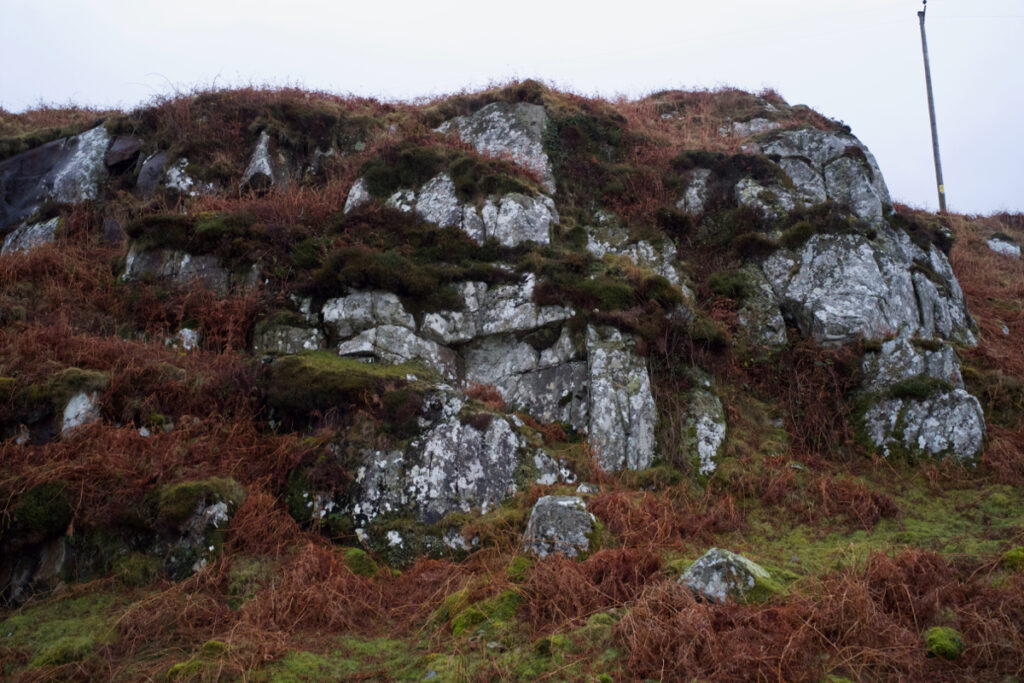 Above:  The rocks directly above the milestone.  Below:  a slightly different angle.  No fairy portal… or hundreds? 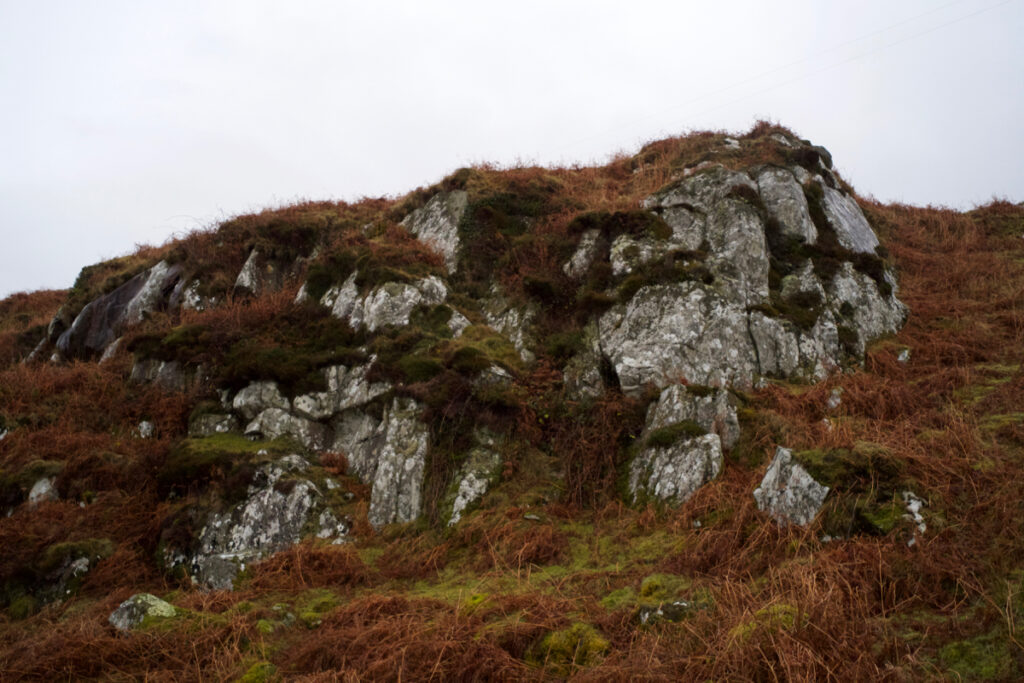 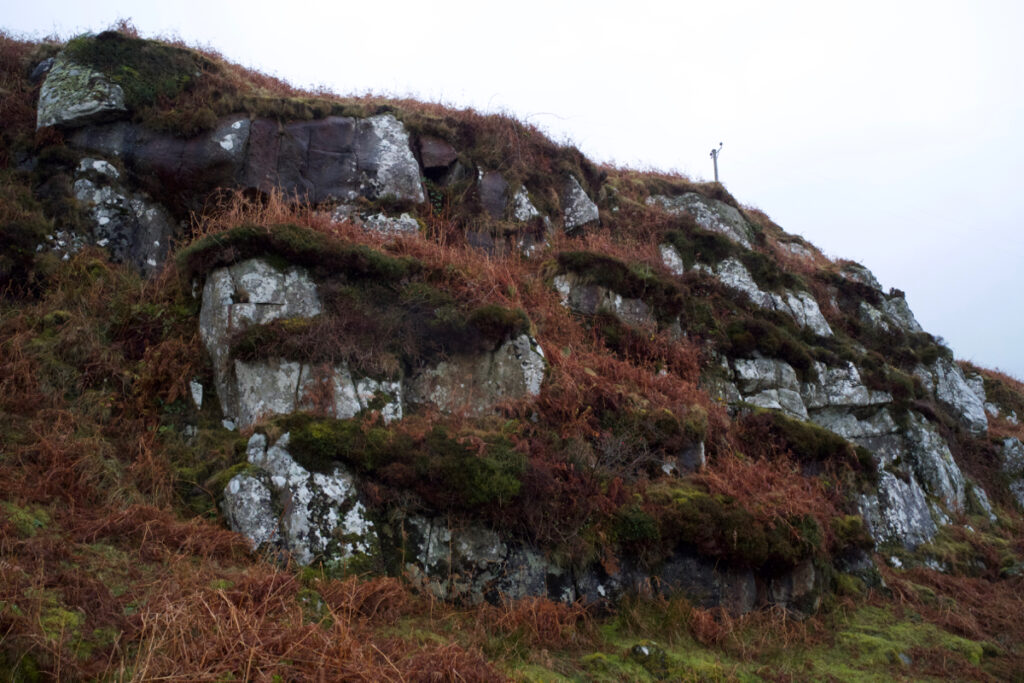 For some reason I didn’t feel at all inclined to go clambering around, looking for a fairy door. It was wet and slippery, for one thing. And the part of me that believes in fairies didn’t want to disturb them. If they only allow themselves to be heard at certain times, by certain people, they’re probably fussy about their homes and doorways, too. Either that, or they’ve moved away and their abode has fallen into disrepair, like the human dwellings down the road at Doide. 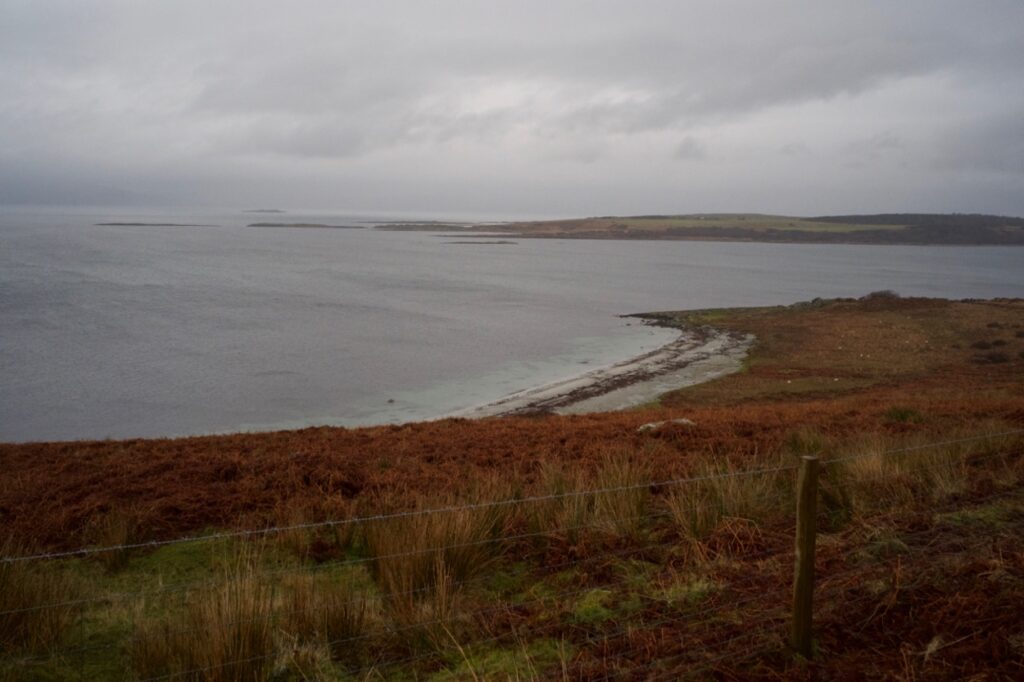 Above:  Looking west from the rocks, across Doide Bay towards the island of Danna.  Below:  Is this another portal?  Seen a few hundred yards down the road, with hazels growing on top of it 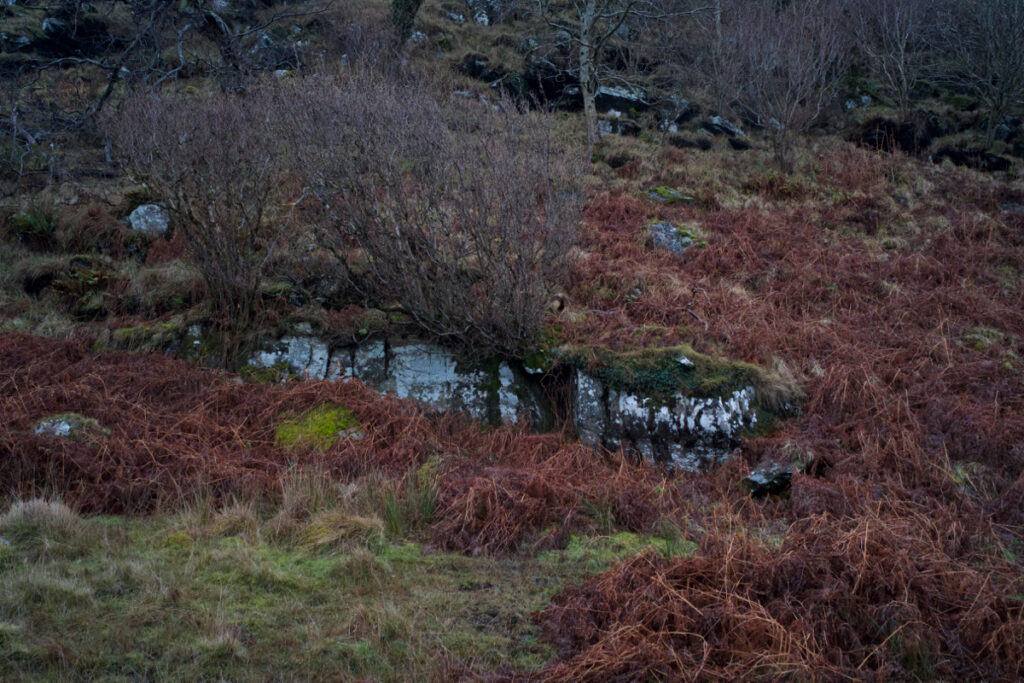 So, I didn’t find the fairy portal, and I heard no enchanted music. I suspect that my best chance would have been to come upon the place by accident, like Dilys Hooton did, with no prior knowledge – and, as Dougal McTaggart said, in the right mind.  It also occurred to me that Dilys might have had an extra advantage: she was carrying some milk. Fairies love milk, and were known to steal it by all kinds of devious tricks. In the Highlands, sometimes a token offering of milk was left out for them, to persuade them to leave the rest of it alone.

Dilys came back to live at Kilmory in the 1980s but she never heard the fairies again. She remarked that their door was most likely “bolted and barred against the noise of internal combustion engines.” She could well be right. Have we driven them away with all our modern intrusions? I really hope not.

It seems to me that there’s one big difference between the present day and the time of Dougal McTaggart and his contemporaries: in centuries past, people had no doubt that fairies existed. It wasn’t a frivolous belief – they respected and even feared them, along with lots of other entities that dwelt in the spirit realm. Dougal’s generation also understood our connection with nature and the landscape, in ways that we’ve forgotten.

I suspect that, just by writing about fairies and putting it out on social media, I’m probably giving up all chance I have of ever experiencing them! But even so… I’ll be down that way again before too long, and I’ll be listening for their music.