At the end of September we were driving up to Kingussie in the Cairngorms National Park. We were enjoying the spectacular scenery of moorland and mountains, scored by fast-flowing peaty rivers and lochs fringed with tall pines. As we went through Roybridge I noticed a road sign pointing to the left, up a minor road. It said ‘Glen Roy Ice Age Landscape’.

This puzzled me for a bit. Wasn’t all of Scotland really an ice age landscape? Was there some kind of visitor centre up there? And then it dawned on me: it was pointing to the parallel roads of Glen Roy.

The parallel roads sound as if they might be man-made, and that’s because in ancient times there was no other plausible explanation for them. They are, however, entirely natural, and they are considered to be one of the most iconic features of Scotland’s landscape. We decided to go and have a look. 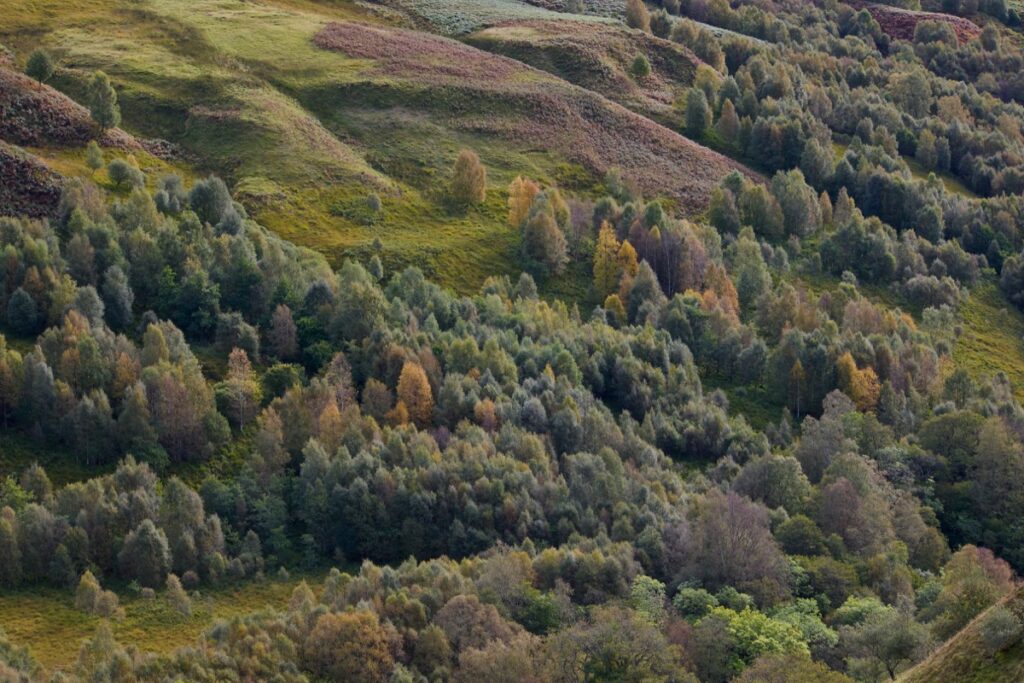 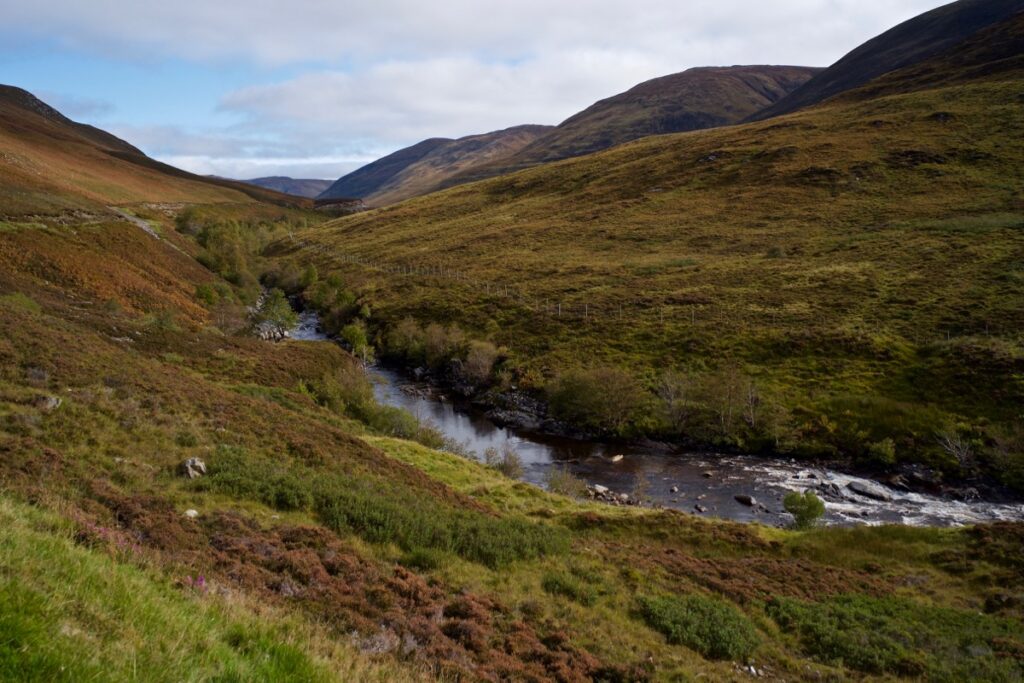 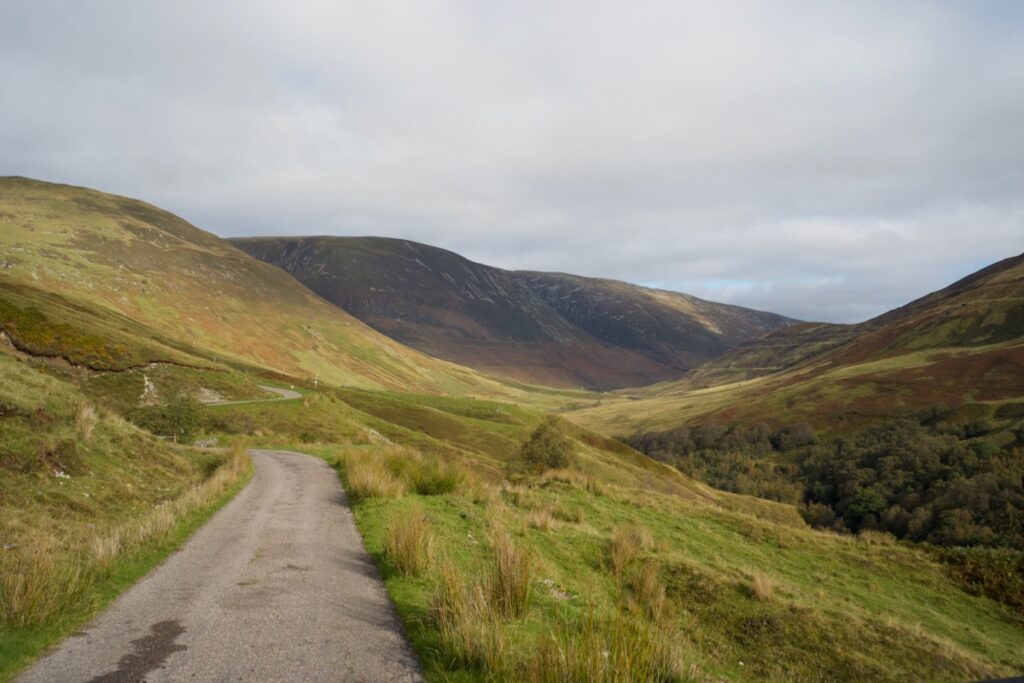 The single-track road from Roy Bridge quickly left the scattered houses behind and climbed steadily up through mixed woodland of willow and hazel. The glen dropped away to our right, with taller trees hugging the river. A few flashes of gold – birch, probably, or aspen – glowed among the conifers. But I wasn’t really looking at trees – I was scanning the hillsides for these famous ‘roads’, and hoping that they would live up to their hype.

In fact, they were hard to miss. Relief turned quickly to astonishment. On both sides of the glen, the slopes are marked with two or three continuous rows of long, thin and unwaveringly straight lines. They follow every fold and spur as faithfully as if some giant cartographer had drawn contours on the hillside. As we got closer, we could see that they were in fact narrow shelves, with flat surfaces perhaps a couple of metres across. You can see why they were called roads. But how were they made? And why? 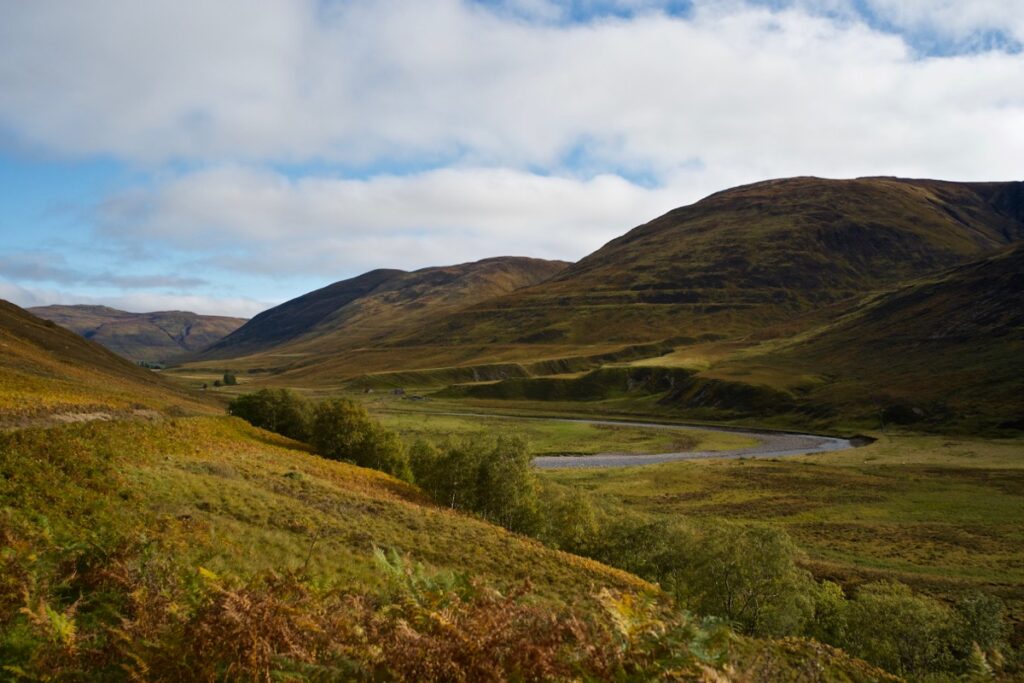 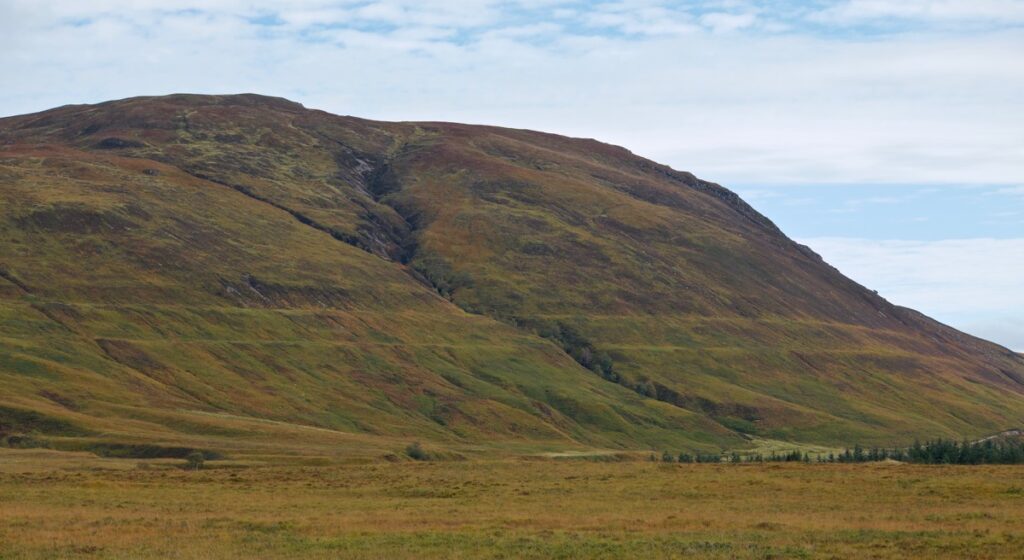 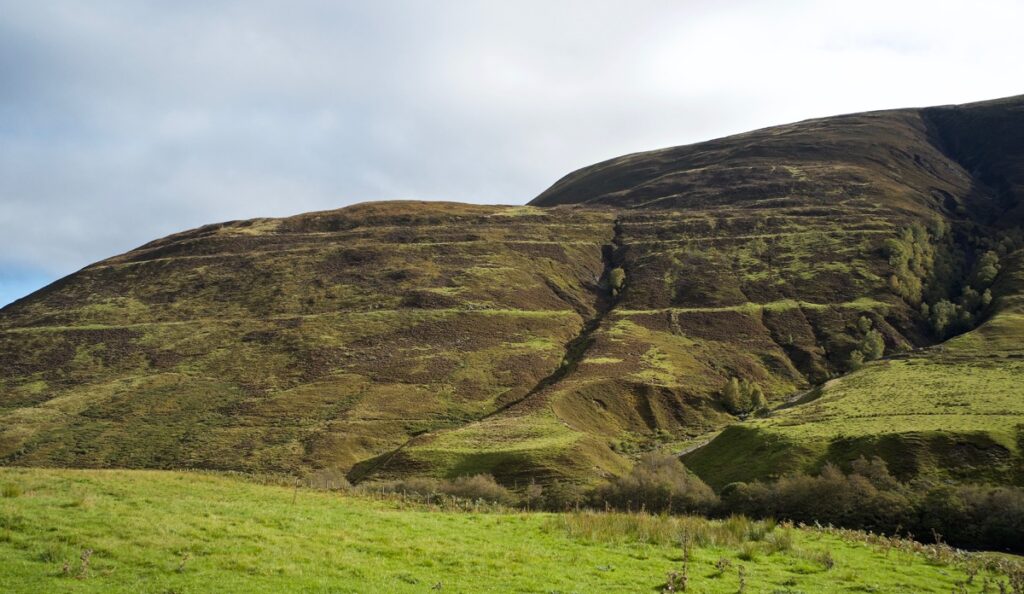 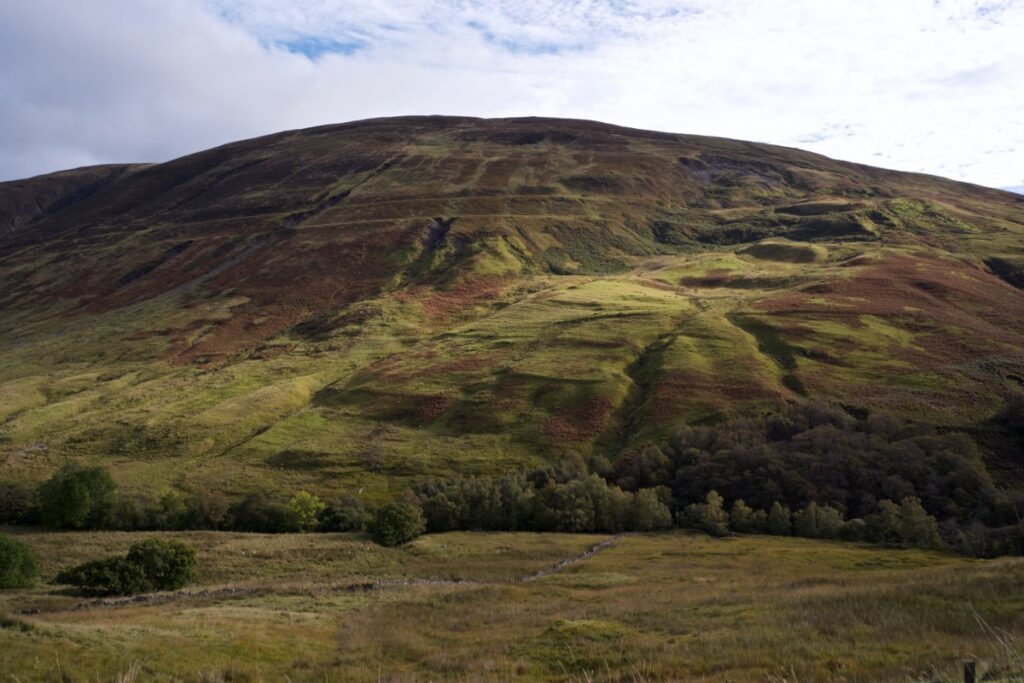 According to our early ancestors, who revered the deeds of their warrior-gods, these were the paths followed by the legendary fighter Fionn MacCumhaill and his band of huntsmen, the Fianna. In Irish mythology, Fionn was a true superhero who had acquired his powers as a young lad by accidentally tasting the flesh of the Salmon of Knowledge. These salmon had fed on hazel nuts that dropped into a sacred pool, and the druids believed that anyone who ate the salmon would acquire the hazel’s wisdom.

Fionn’s life was filled with passion and heroic adventure. You can perhaps imagine him galloping along the parallel roads in angry pursuit of the fleeing lovers Diarmuid and Gráinne, who had betrayed him at his own betrothal feast, or searching desperately for his lost love, Sadhbh, whom a dark-hearted druid had turned into a deer.

I have to admit that I love this version of events more than the true story.

But no, history is quite adamant that the parallel roads didn’t resound to the hoofbeats of Fionn or any of the other mythical heroes; nor (as another story claims) were they tracks used by Scottish kings on their hunting expeditions out of nearby Inverlochy Castle. 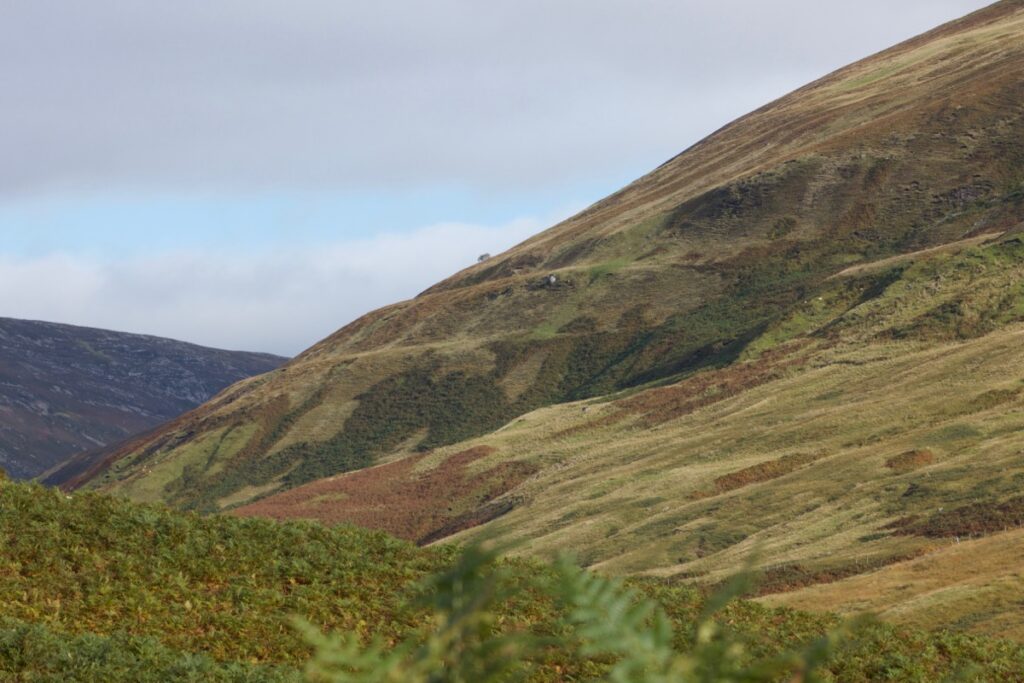 The ‘roads’ in profile

Glaciologists have worked out that they are, in fact, the margins of ice-dammed lakes, formed during the last glacial period, which began about 12,900 years ago. While the water has long since gone, the marks remain as evidence of water levels that persisted long enough for frost weathering and wave action to erode a distinct shoreline. The ‘roads’ occur at three different heights: 260, 325 and 350 metres. An ice field advancing from the west blocked the entrance to Glen Roy, thereby damming an already existing lake and causing it to rise to 260 metres. As it encroached further, and overflow routes were blocked off, the level rose to 325 metres and then 350 metres. Similar lakes were formed in adjacent glens. 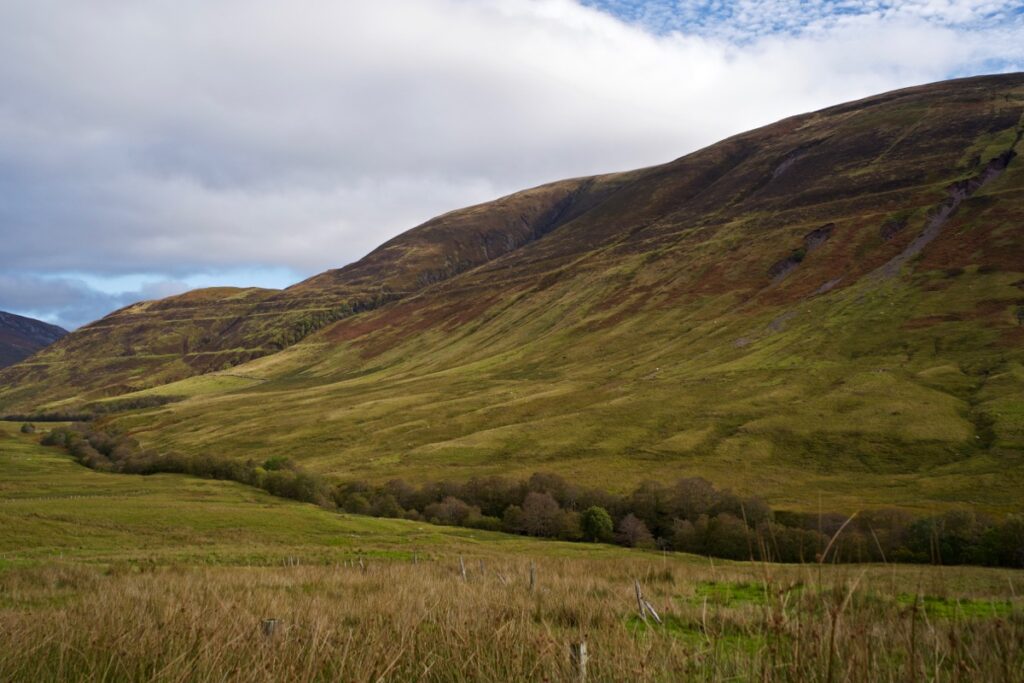 Then, as the climate became warmer around 11,500 years ago, the glaciers began to retreat and the lake levels dropped again – pausing at the same levels as the natural overflow routes were exposed. Scientists believe that, when the water reached the 260-metre level, the draining of the lake happened suddenly and dramatically as the water forced the glacier off its bed:

“The biggest glacier burst took place after the ice dam had retreated to Spean Bridge… at this stage, some 5 cubic kilometres of water are believed to have escaped under the ice to Loch Ness and into the sea at Inverness.”

‘Glen Roy – A Landscape Fashioned by Geology’ (BGS and SNH)

This must have been spectacular, to say the least.

We parked close to a conifer plantation right in the heart of the glen and walked along the track, past some farm buildings and across a stone bridge where the River Turret tumbled in its haste to join the River Roy. Here the river’s banks looked disproportionately tall, and curiously flat-topped and steep-sided. This is an alluvial fan, formed when a fast-flowing river suddenly loses impetus, slows down and drops its load of sediment, either on entering a wider valley or (I’m guessing) a body of water such as a lake. The river that formed this fan – and a similar one a little further south – must have been on a much bigger scale than the present one. 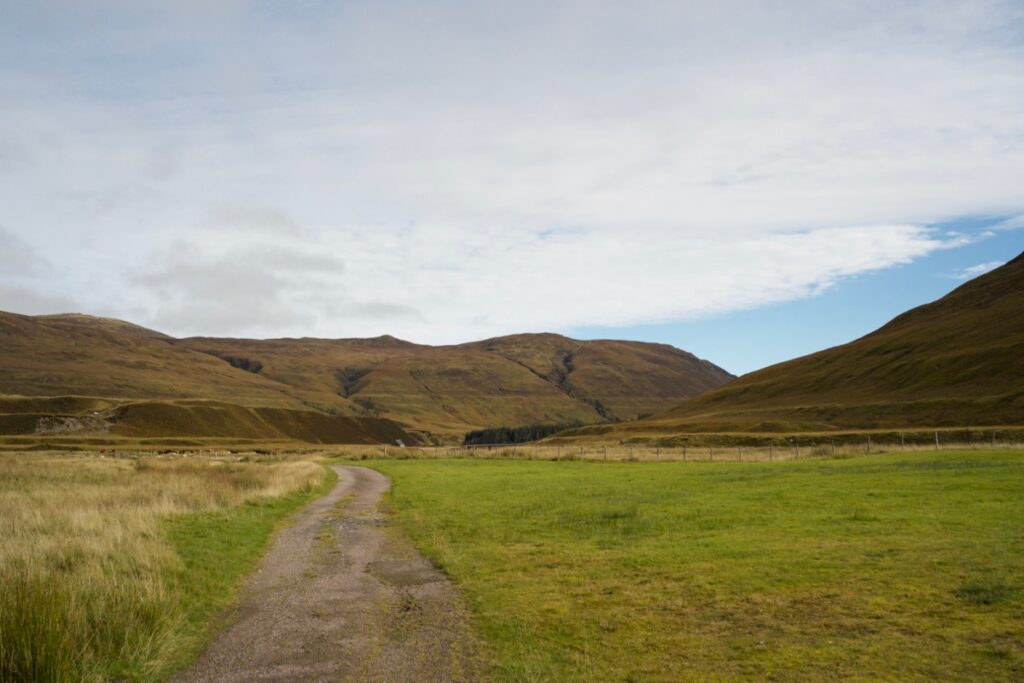 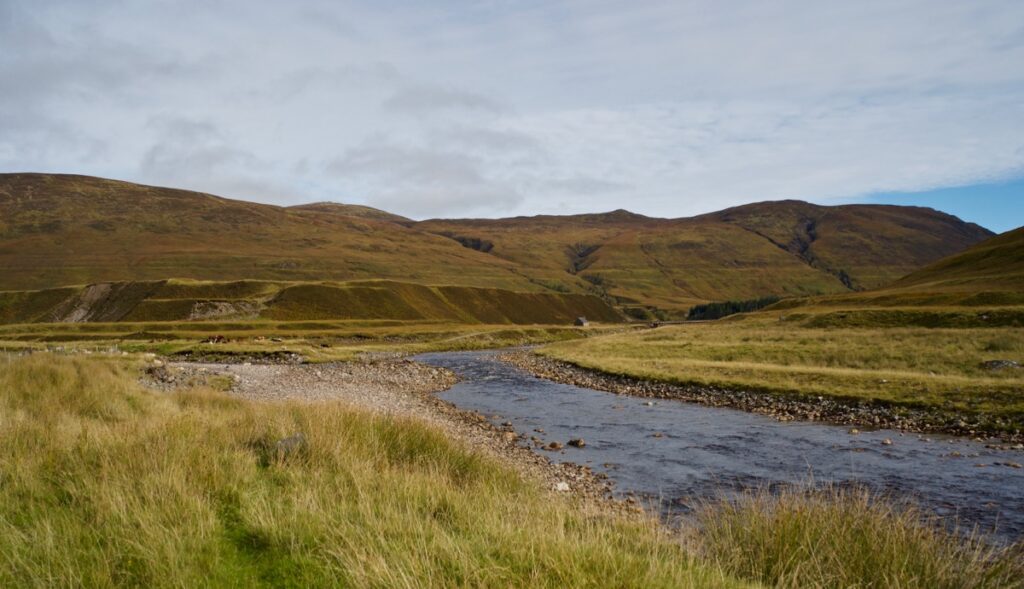 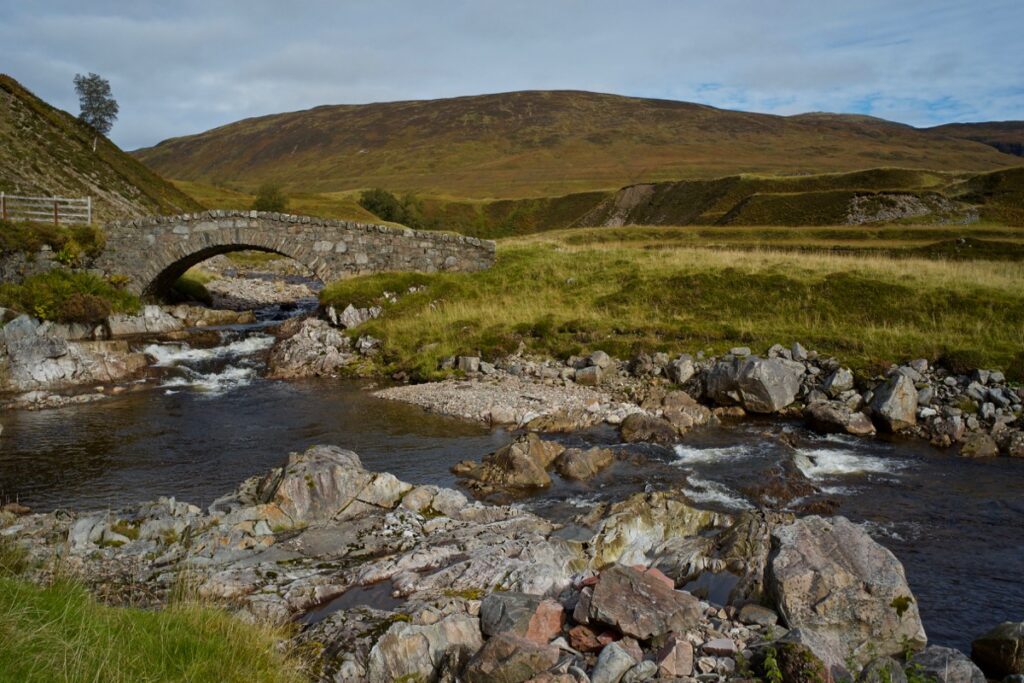 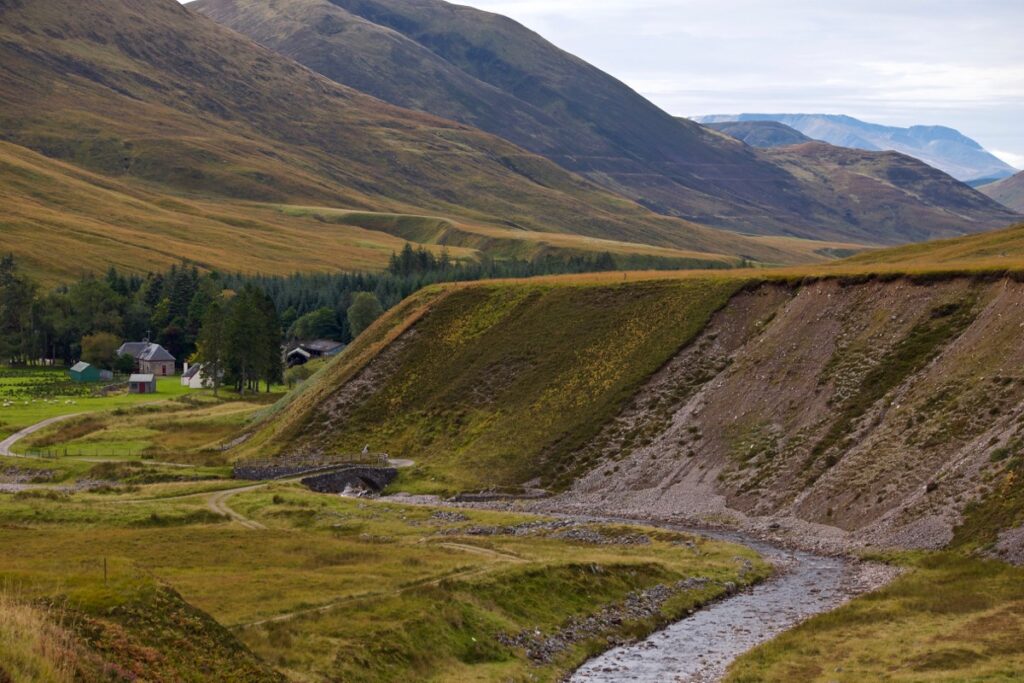 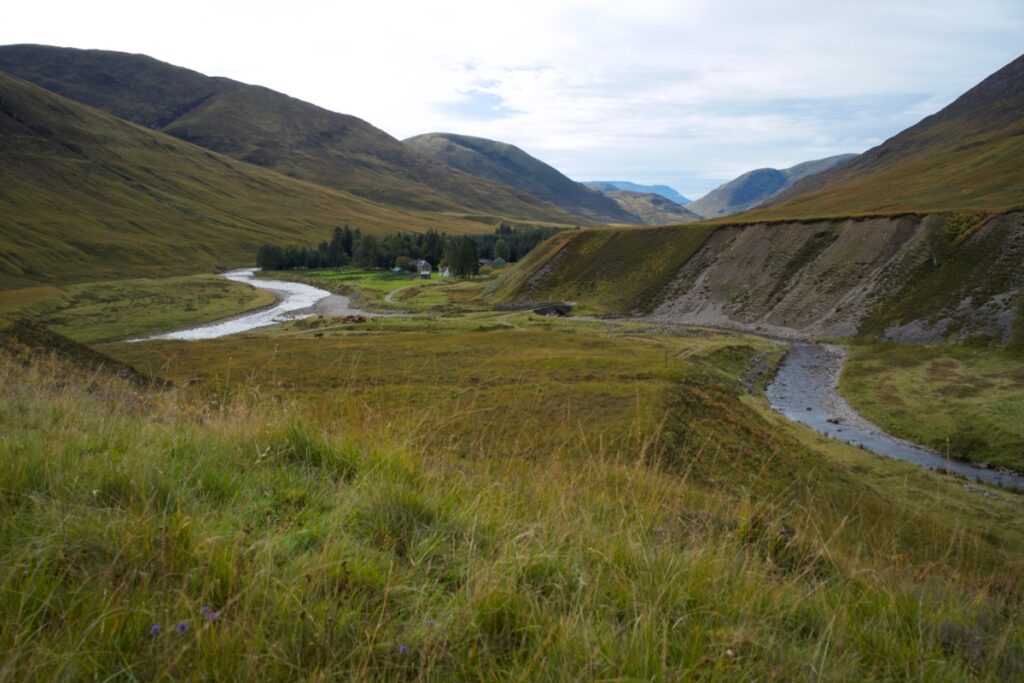 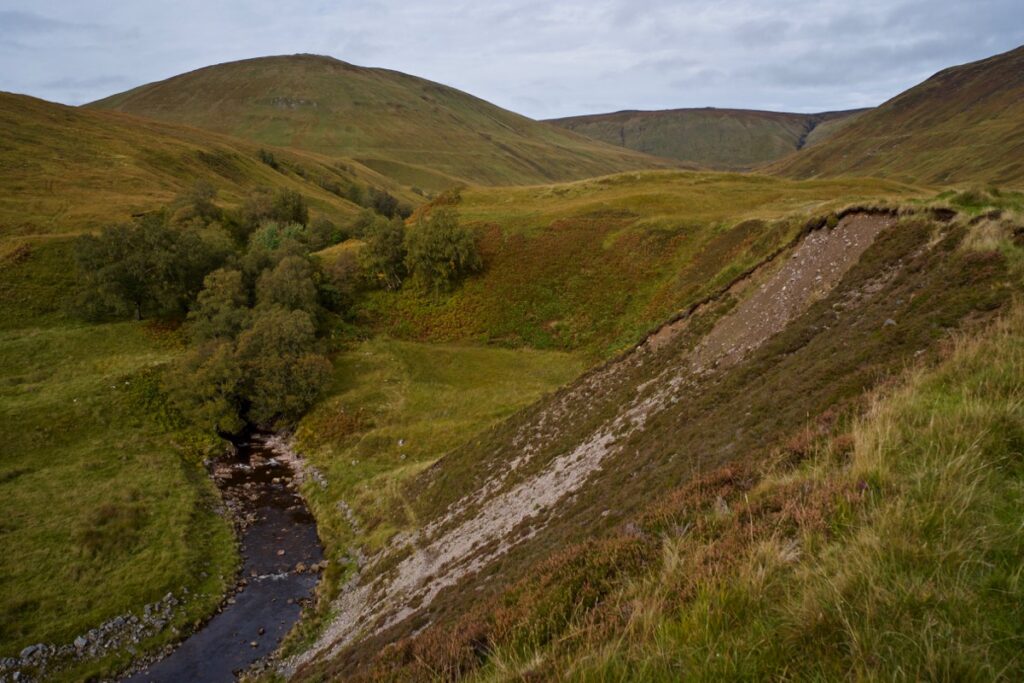 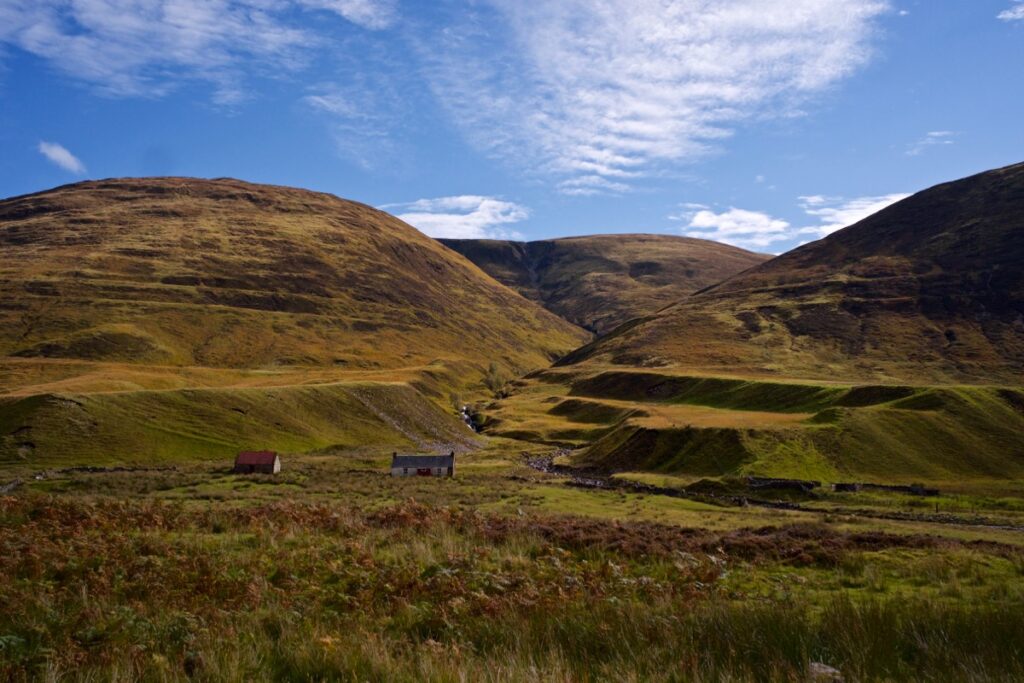 Another alluvial fan, bisected by a river, with the ‘roads’ seen above

We could hear a red deer stag roaring from the far hillside. The sound carried across to us with such clarity that he seemed much closer. I found him with binoculars: crowned with a fine set of antlers, he was half-way up the slope and making his way slowly along it, accompanied by an entourage of hinds. He wasn’t that fussed about glacial lakes. I imagined him using the parallel roads as a conveniently level path upon which to make his stately progress, like a conquering monarch returning home triumphant from the field of battle. An echo of Fionn MacCumhaill, perhaps, steadfast and defiant, eternally declaring his passion and his power.

In the 18th and 19th centuries the parallel roads of Glen Roy perplexed hundreds of visitors, including the great Charles Darwin who believed that they had been caused by rises in sea level. The puzzle was solved by a brilliant Swiss scientist, Louis Agassiz, who was the first to suggest that glaciers had been present in Scotland. You can read more in my blog post about Glen Roy for the Royal Scottish Geographical Society.