About 3.30 pm on an October day and it had finally stopped raining. We needed to get out for a walk. Where to go? What about Barnakill, I said, that old place we saw on the map – it looks like you can walk to it from the Crinan Canal…

So we crossed the canal at one of its locks, slid down a slope to the track that runs below the towpath, walked through a farm gate and then struck north through a field that was deep with liquid mud and cow splats. The air was drenched after the rain, but the low sun turned the hills to gold and lit up every trembling droplet with fire. A herd of cows and their calves stared at us with placid curiosity.

The landscape of Crinan Moss is beautiful and precious, full of wildlife and history but awkward to battle through on foot. Rough, rocky, knobbly ridges, colonised by oak, birch and hazel, punctuate big expanses of reedy quagmire. Stepping from one hummock to the next needs a bit of focus, otherwise your leg will sooner or later go down a particularly deep and squelchy hole. Thousands of years ago, this low-lying landscape would have been partly flooded by the sea, at least at high tide. That was what made the fortress of Dunadd so well situated from a defensive point of view. 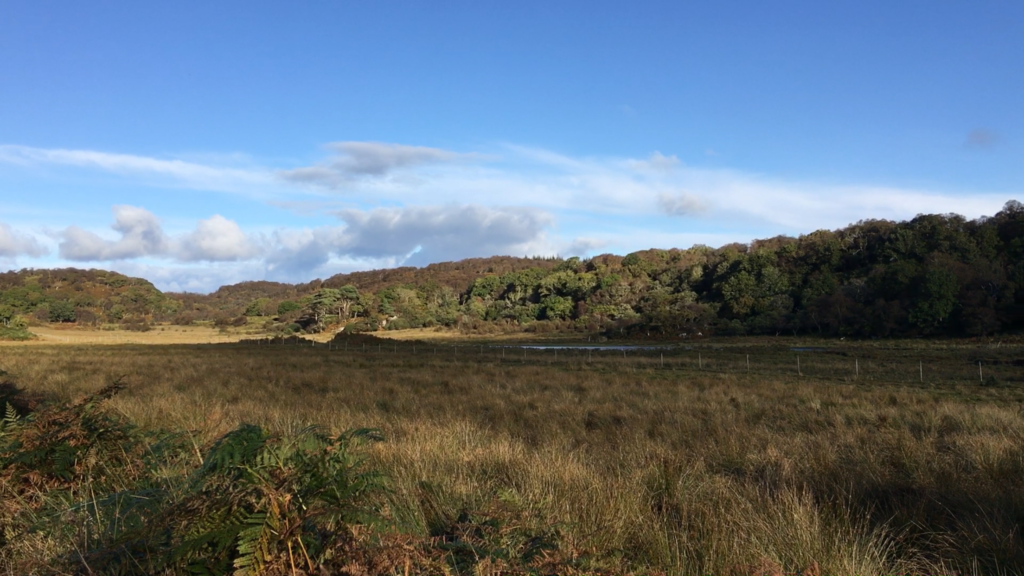 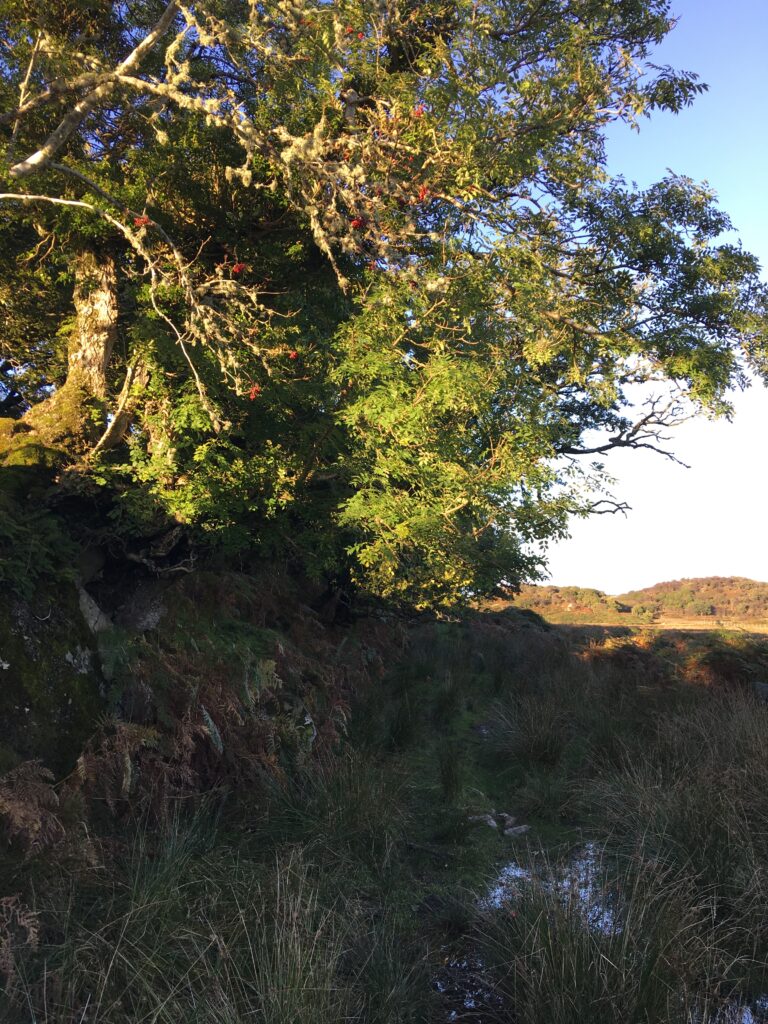 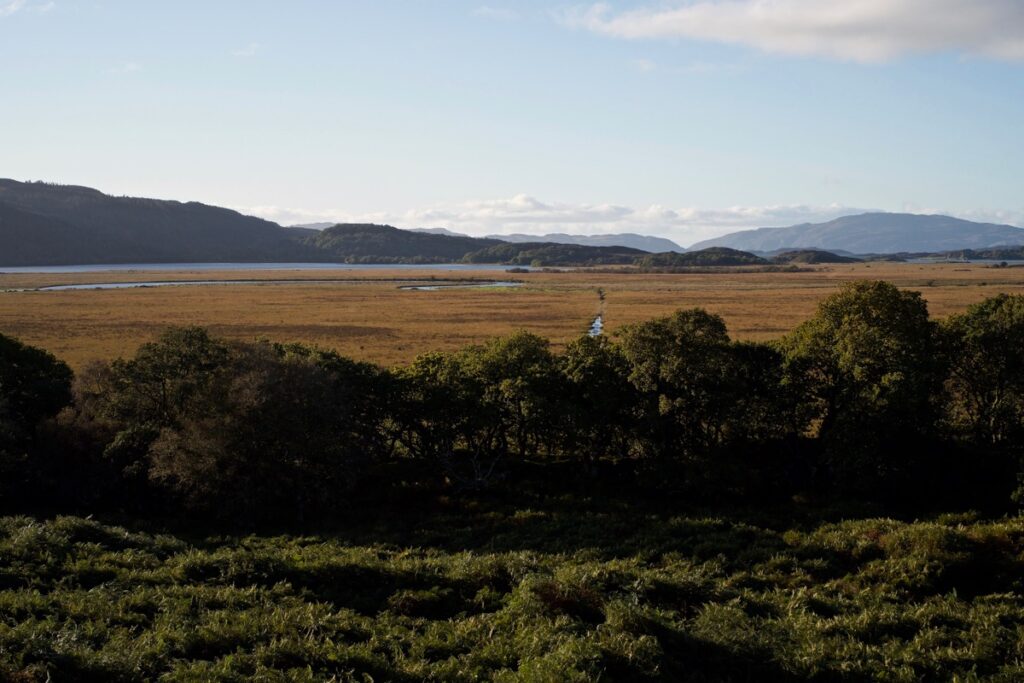 Looking west across the Moss, with the River Add meandering towards the sea

But the difficulty in access gave us one advantage, in that it definitely wasn’t a popular walking route. This felt like wild, remote country, despite being less than a mile from the canal. Red deer were roaring from a nearby wooded ridge, and a female hen harrier quartered low across the moss, her long wings steering her effortlessly in loops and turns as she scrutinised the ground for signs of life. We stopped also to notice the trees: a sweet chestnut loaded with green prickly balls, not quite ready to fall; and an enormous ash tree, so gnarled and weather-sculpted that its bole was hollow and open to the elements. 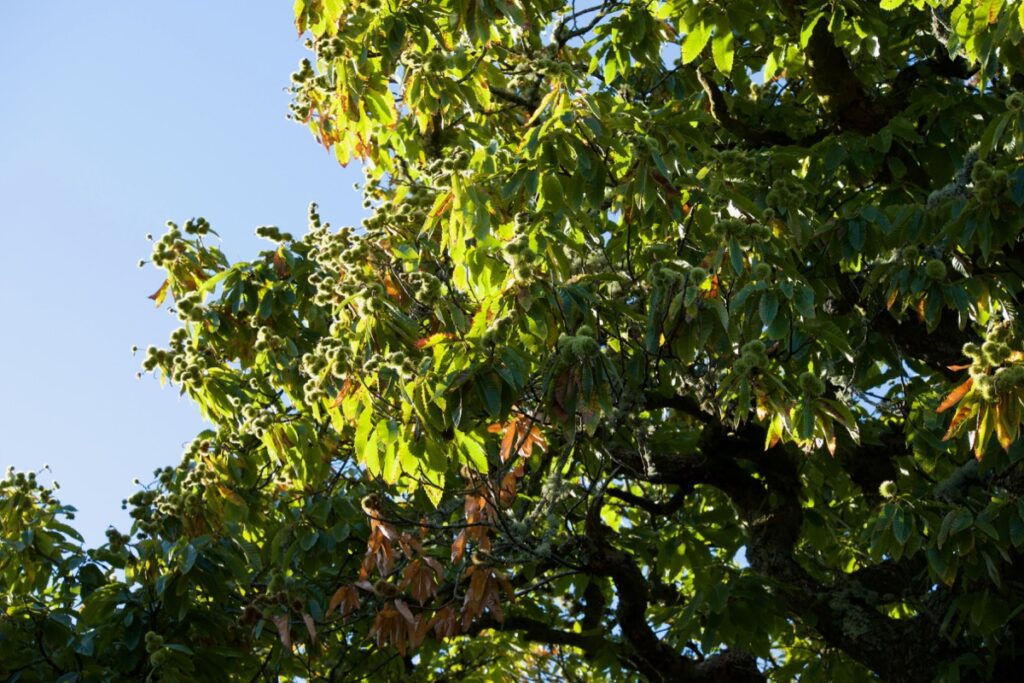 Above:  sweet chestnut;   below:  ash 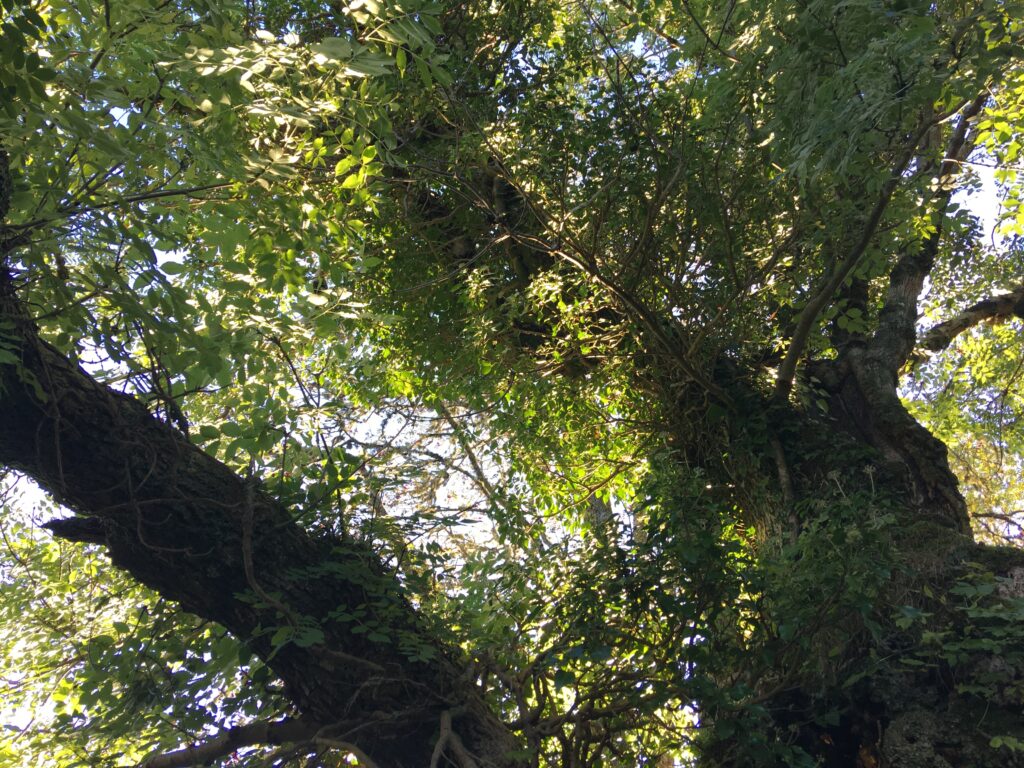 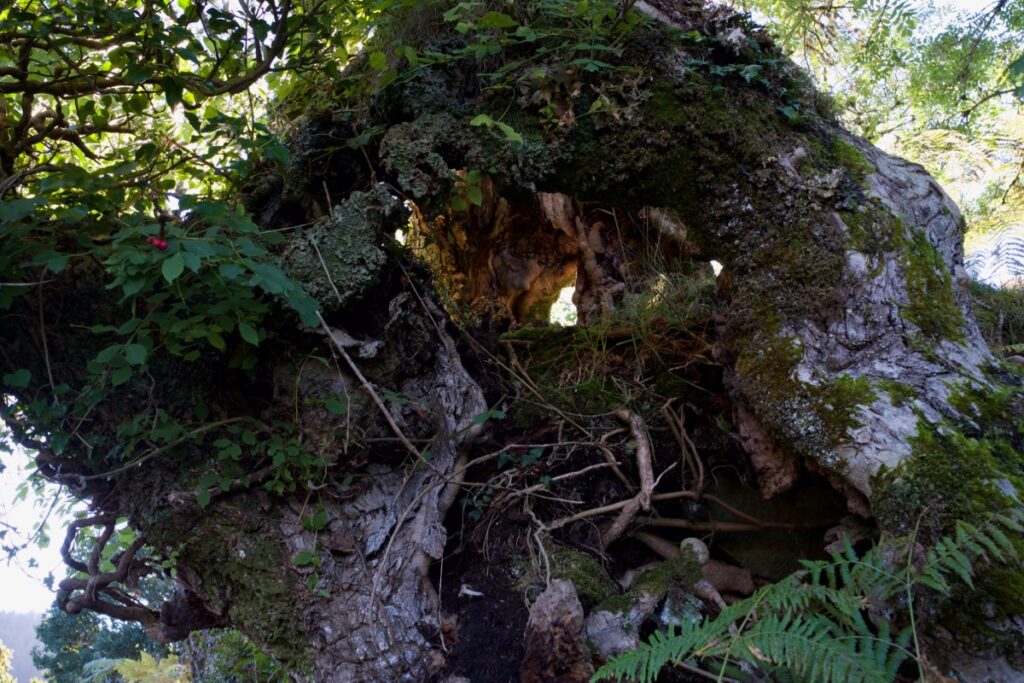 The track to Barnakill, so carefully drawn on the map, had totally disappeared by now, and in front of us the bog gave way to a rising hillock of tall bracken. I really dislike bracken, and this year it’s taking a while to die back. But we pushed through, reached the crest of the hill, and were rewarded with views down into the abandoned farming settlement of Barnakill. 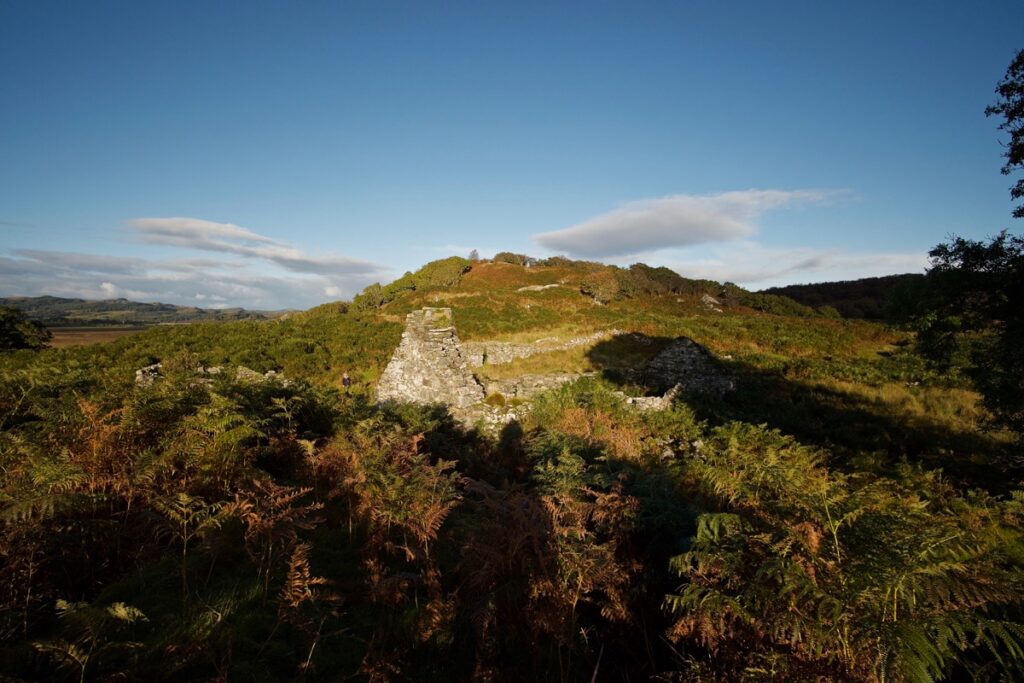 Barnakill must have been deliberately situated on ground that is a little higher than the surrounding bog. (In fact, it’s called ‘High Barnakill’ in many sources.) It sits on the edge of a long low mound, with two wooded ridges running parallel on either side. We could see the remains of three or four buildings, one with its roof timbers still lying where they had collapsed. Around them it was dry underfoot, but the whole place is choked with vegetation, which presents a different type of obstacle. I expect the bracken dies right back in winter, which would be a better time to come, especially when the ground is frozen hard. 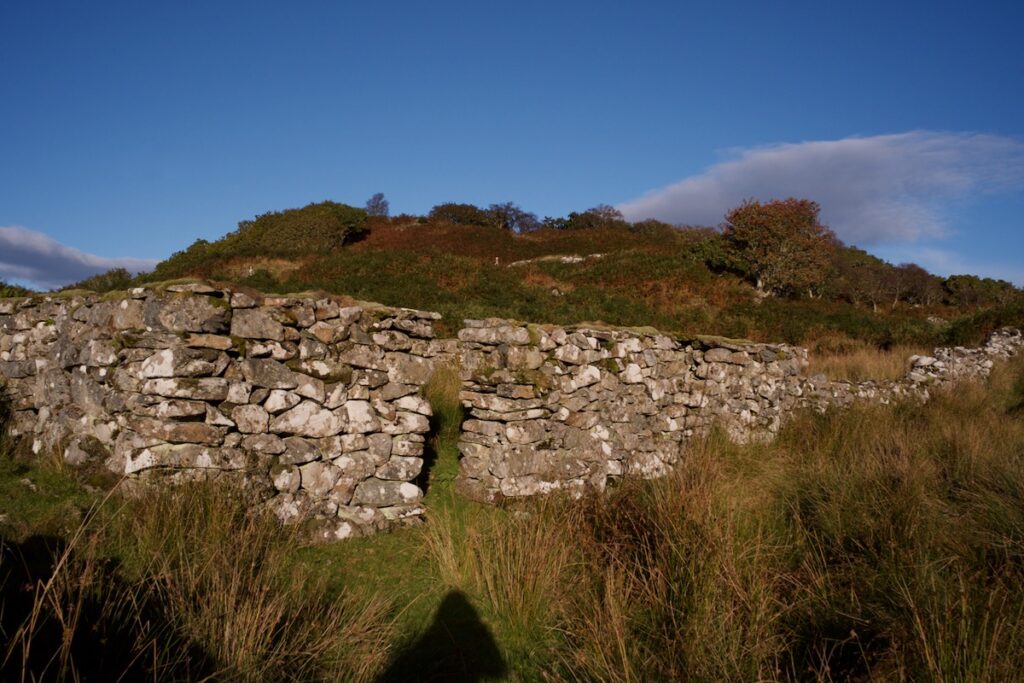 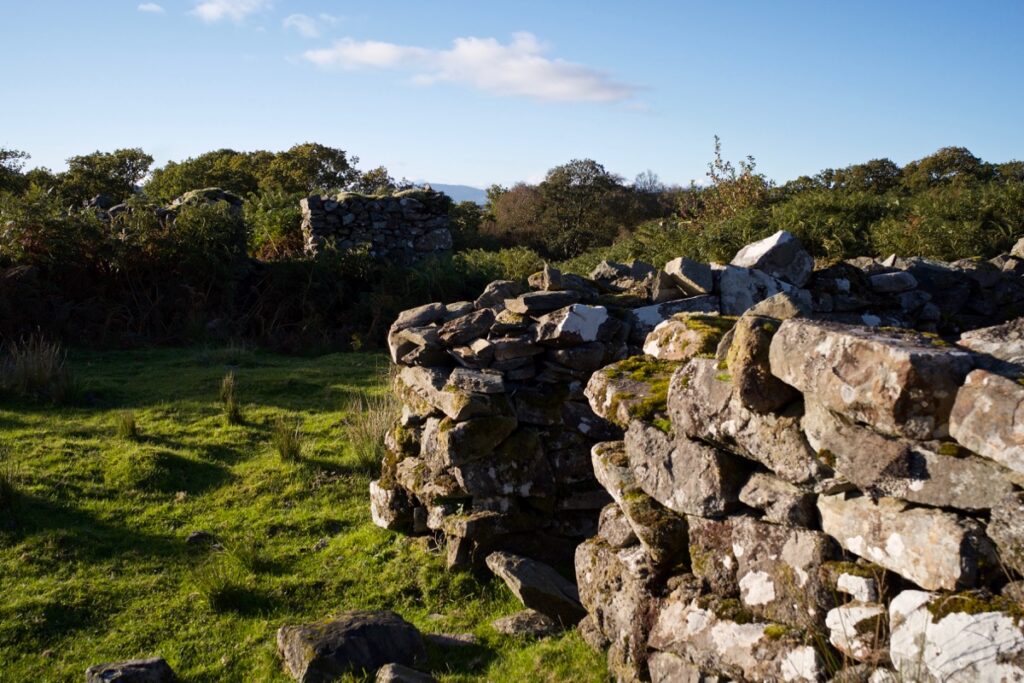 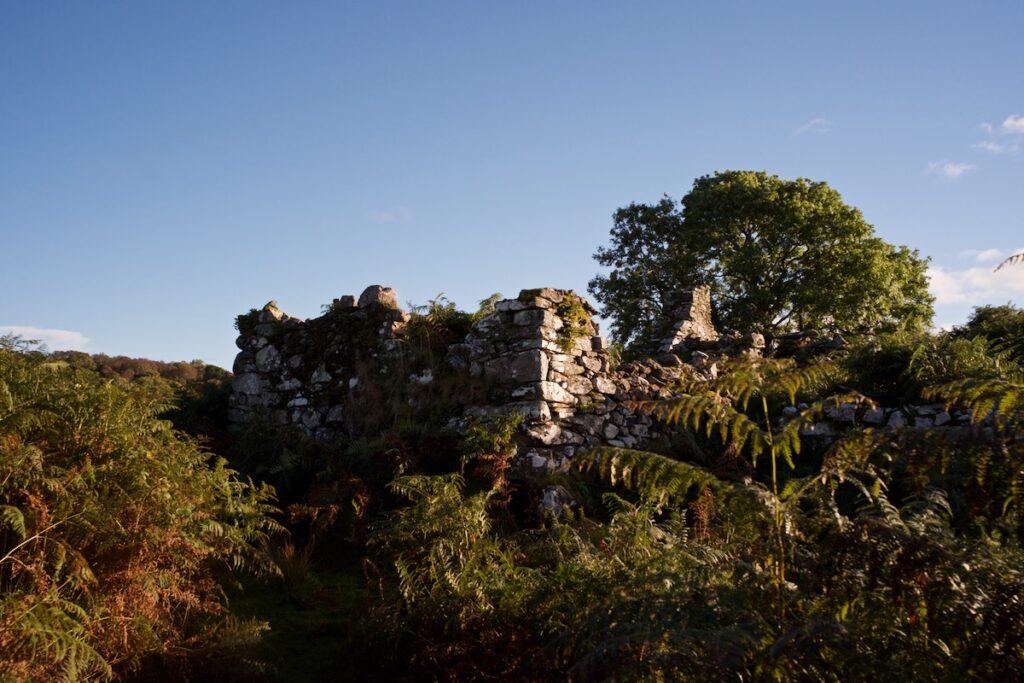 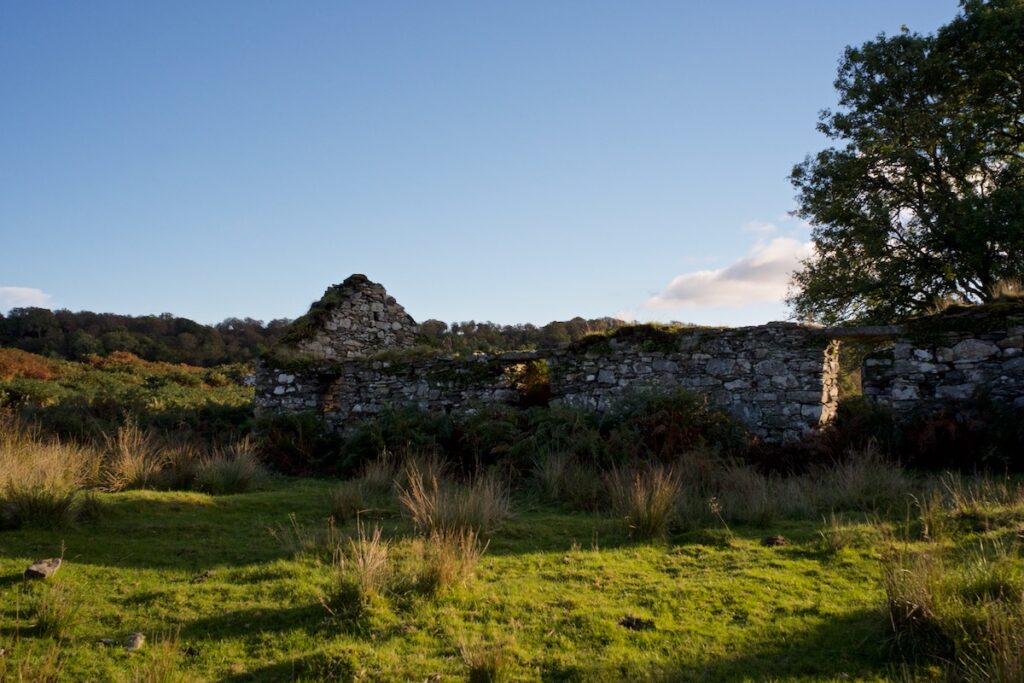 The largest building (above), which may perhaps have been a row of dwellings, had a fireplace set into a gable wall that is still standing to roof height.  A low stone wall runs round part of the settlement, but it was impossible to trace its full extent. With the bracken at head-height in places, I almost felt as if we were exploring underwater, glimpsing the last remnants of some centuries-old structure that had long since been engulfed by the waves. But I suspect that Barnakill wasn’t abandoned that long ago; maybe the late 1800s or even the early 1900s. The 6” OS map (surveyed in 1865, published in 1873) shows five roofed buildings; in 1898 (published in 1900), four are shown as roofed. On an OS map published by the War Office in 1941, the shading suggests that at least two buildings were still roofed – but of course, this doesn’t mean that they were occupied.

Section of OS 25″ map of 1893, showing six buildings at Barnakill, shaded in pink.  An old limekiln is indicated at lower left but we saw no trace of it.  Map surveyed 1864;  courtesy National Library of Scotland

I can as yet find no note about the inhabitants of Barnakill, and why or when they left. I would imagine that, in common with many other settlements round about, it became increasingly difficult to make a living off the land. In the 1800s, as more and more landlords introduced agricultural ‘improvements’, their tenants were encouraged – or forced – to move elsewhere, but in this case I can only speculate. There are many other factors to consider, all contributing to the demise of a centuries-old way of life: a fall in cattle prices, the recurring failure of potato crops, and a burgeoning population that faced starvation in seasons of poor harvest. Young people moved away to seek employment in the cities, or boarded ships bound for Canada or Australia, where they had a chance of owning land. At Barnakill in particular, I find it difficult to imagine how anyone could cultivate the surrounding ground, as wet as it is. The wooded ridges might have been more productive – Canmore records ‘rig and furrow’ patterns close by – but the ground is rocky and the soil probably poor. Cattle here might have been viable, but in harsh winters they must have suffered. 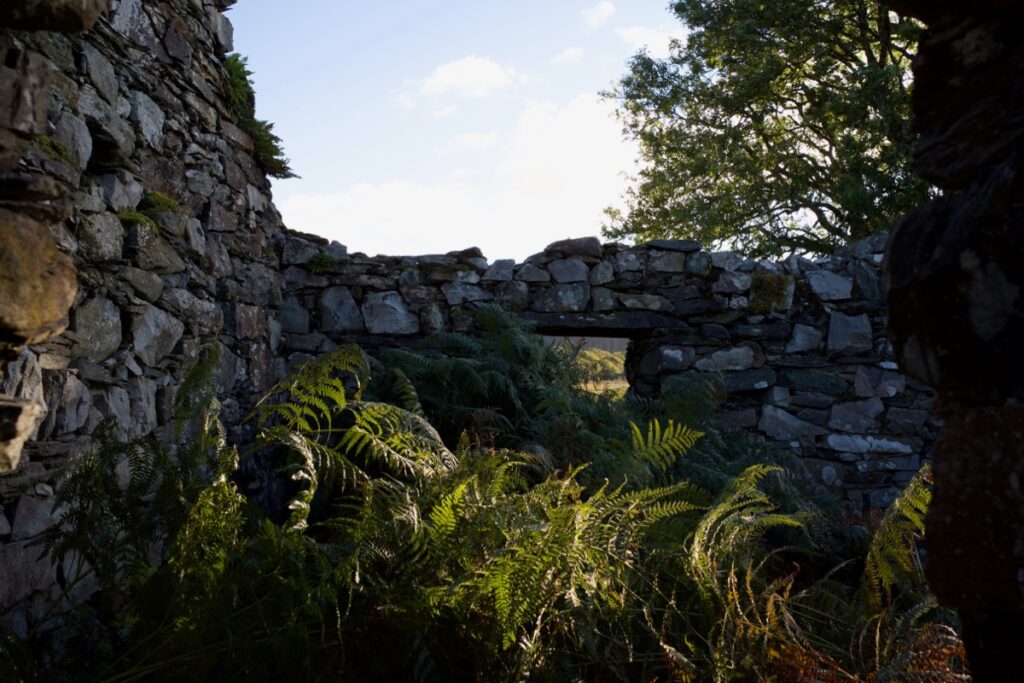 Something of Barnakill’s older history has survived and can still be seen. In the 1920s a cross-carved upright stone was discovered in a nearby enclosure which was traditionally known as ‘the Monk’s or Friar’s Graveyard’.  (We didn’t see the enclosure – it is probably overgrown).  Dating from somewhere between the 7th and 9th centuries, the stone had been built into the low wall of the enclosure, but this may not have been its original position. Beneath its simple cross is an inscription which looks like the letters ‘CHIE ton’. Believing this inscription to be as old as the cross – unusual in itself – historians have attempted to interpret it, with differing results. One theory is that it means ‘the cross of Naiton’ or ‘Neiton’, the latter name apparently common among Britons, Picts and Scots. Another theory, based on letters that may have been lost, suggests ’in the name of Christ’. 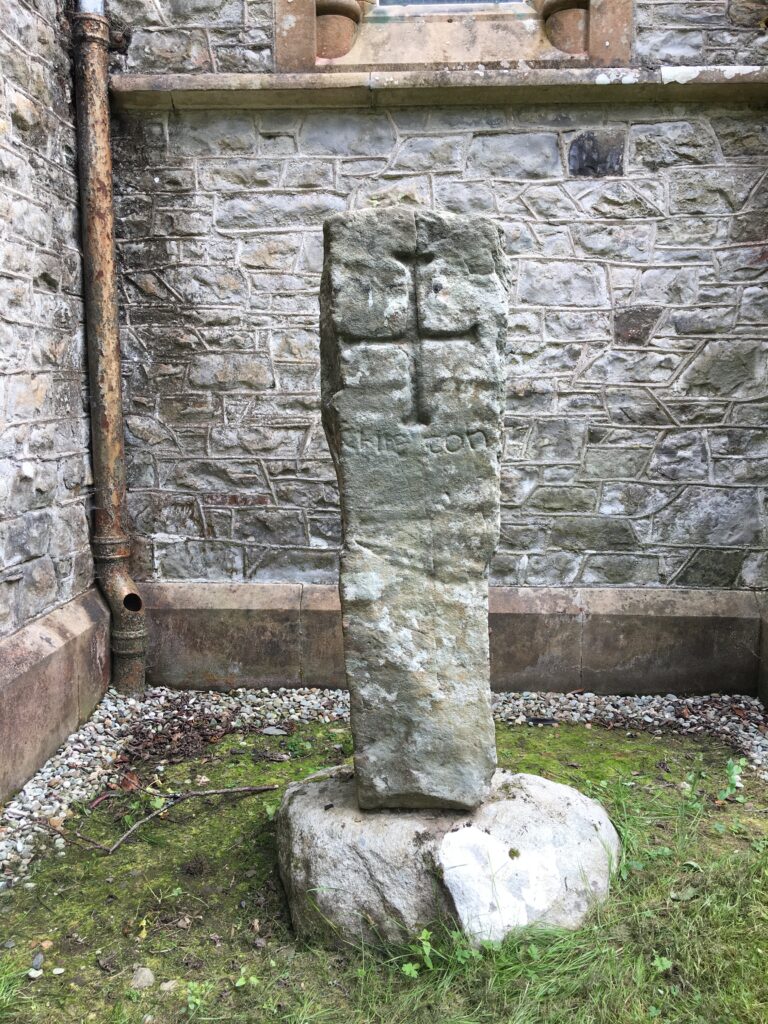 The stone was removed from its position in 1928 by local historians, and now stands outside the chapel at Poltalloch, a short distance away.

The original purpose of the enclosure is unclear.   It has been speculated that it was a prehistoric hut circle, with several periods of construction, but another surveyor (reporting on Canmore) dismissed this idea because the site is too low-lying and marshy for habitation. One thing is for sure, if the old name of ‘Monk’s Graveyard’ is to be believed:  it was revered at some time in the distant past, because of the person – or persons – who were  buried there. A saintly presence is also hinted at in the place-name of Barnakill, which means ‘the mound of the hermit’s cell’. 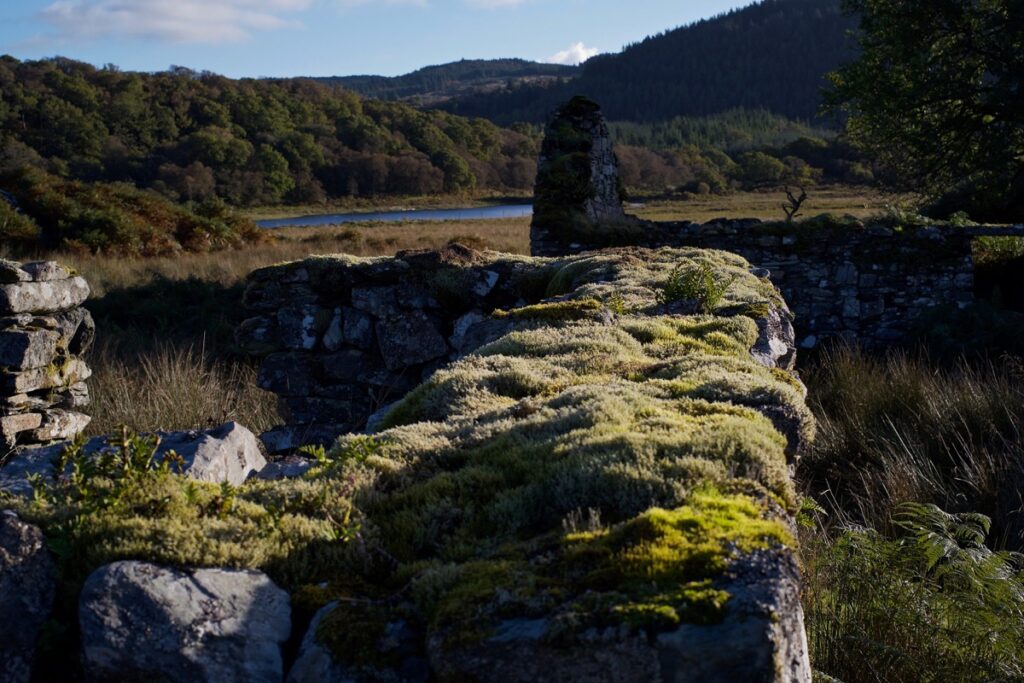 The sun was sinking behind the woods to the south-west, casting deep shadows. It wouldn’t be fun picking our way back if we left it much longer. Trying to retrace our steps, we ploughed through the bracken and got ready to flounder across the bog. We then noticed that a red deer stag had come out from the trees a couple of hundred yards away and was bellowing loudly in our direction.  Keen as we were to stand and watch him, we knew that we should keep a low profile.  So we ran back over the hummocks with more energy and precision than I had previously thought possible, and on reaching a strip of dry woodland we hid behind some trees while the stag made his stately progress through the moss, roaring at intervals in answer to a more distant rival. Two or three hinds were following him, but they took off – perhaps having sighted or scented us – and leapt over a fence before heading back into the wood. A couple of minutes later the stag came trotting back and followed in their wake, perhaps disappointed that his adoring audience had lost interest. 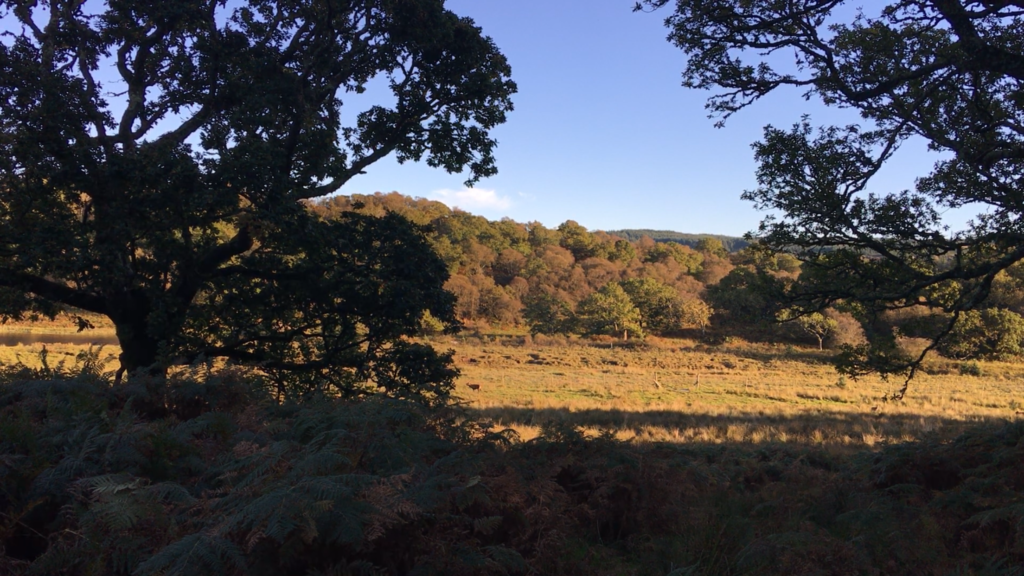 We left them in peace and trudged back the way we had come. Another hind – a sika deer this time – bounced ahead of us, leaving slots in the mud and occasionally stopping to put her head up above the reeds and stare at us with her large dark eyes. She disappeared before we rejoined the canal. The air suddenly smelled like autumn – cold, pungent, and unusually still.

Later that night, I went outside and caught my breath when I saw the sky. I don’t ever remember seeing so many stars: perhaps one or two nights in North Wales come close. It was as if a veil had been suddenly swept away, bringing the most dizzying depth and clarity. The stars, even the faintest ones, were steady, not twinkling; directly above, the Milky Way stretched out parallel with the road, a gauzy band of brilliant light. Each star seemed tangible, yet immeasurably distant. I felt as if I was falling into them, and then I realised that actually I was, in a sense, and so are we all. In my mind, I could still hear the stag roaring; the sound stays in your head long after it’s gone. And no doubt he was, with his breath misting away on the cold night air.