Honeysuckle berries are glowing crimson in the woods and wayside verges at the moment, rivalling even the mountain ash with its heavy clusters of fruit. What makes honeysuckle berries so eye-catching is their slight translucence – when the sunlight catches them, they appear to glow from within, like polished jewels. 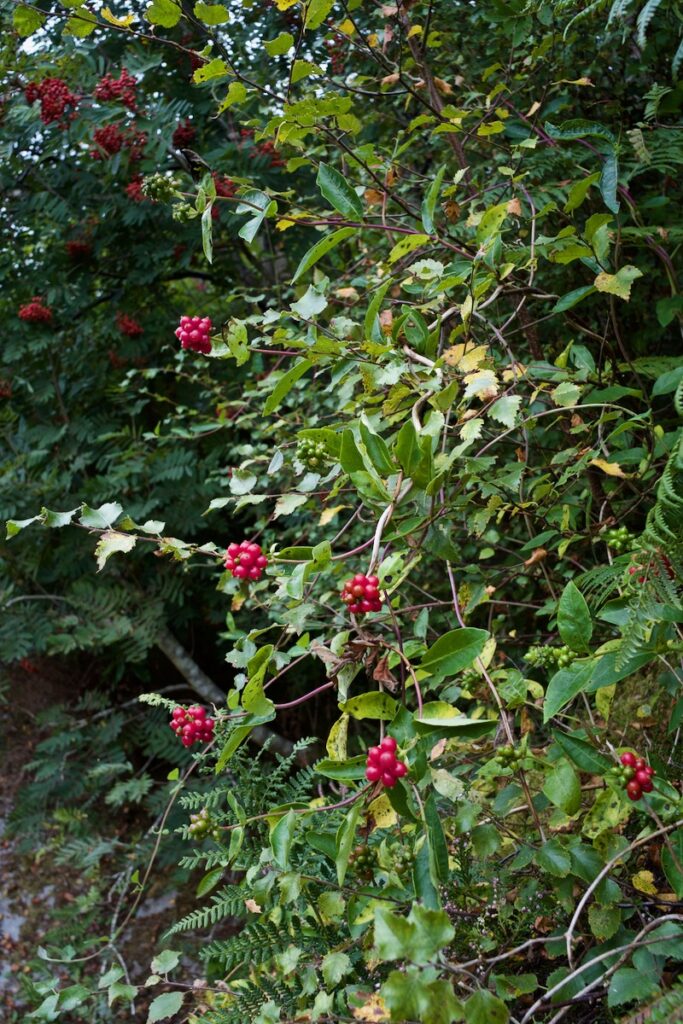 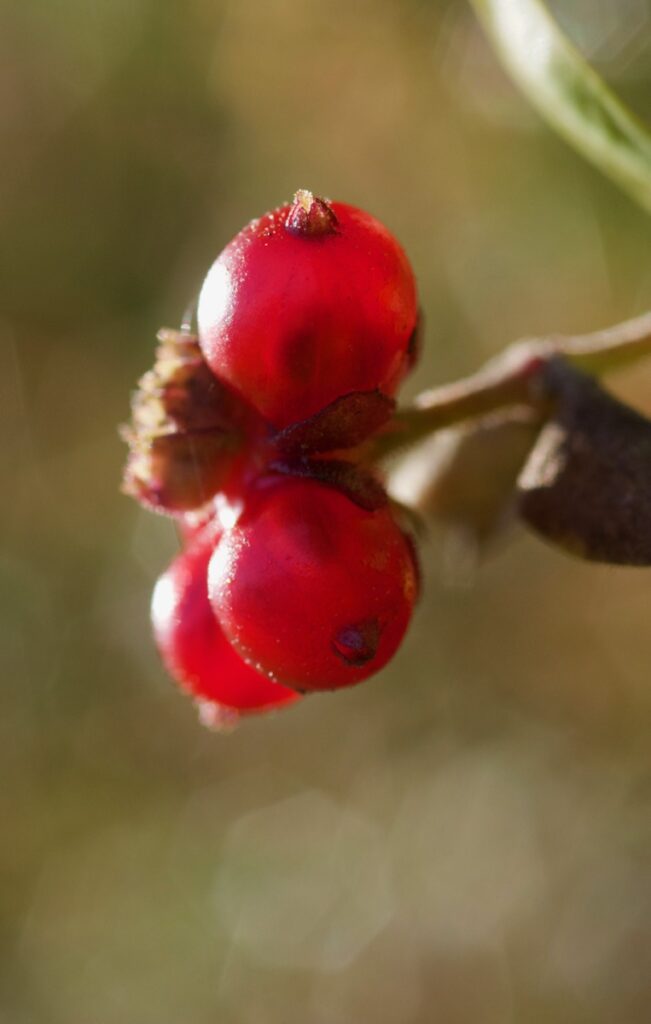 I have long overlooked honeysuckle (Lonicera periclymenum), perhaps because it’s also a familiar garden plant – but of course it was an inhabitant of woodlands long before humans came along to ‘tame’ it, rambling and scrambling its way along the branches of trees and bushes, supported by its pliable, almost string-like, woody stems. When I’m looking for the first leaves to come out in spring, quite often it’s the honeysuckle that’s in brave new leaf before any of the trees in which it’s growing; in fact, some of the leaves can cling on throughout the winter. Its deliciously fragrant cream flowers appear throughout the summer and into the autumn, and then as the nights draw in it gives us this brilliant display of berries.

I thought I would see what stories and traditions were connected with the honeysuckle, and I was happy to find a whole host of them. 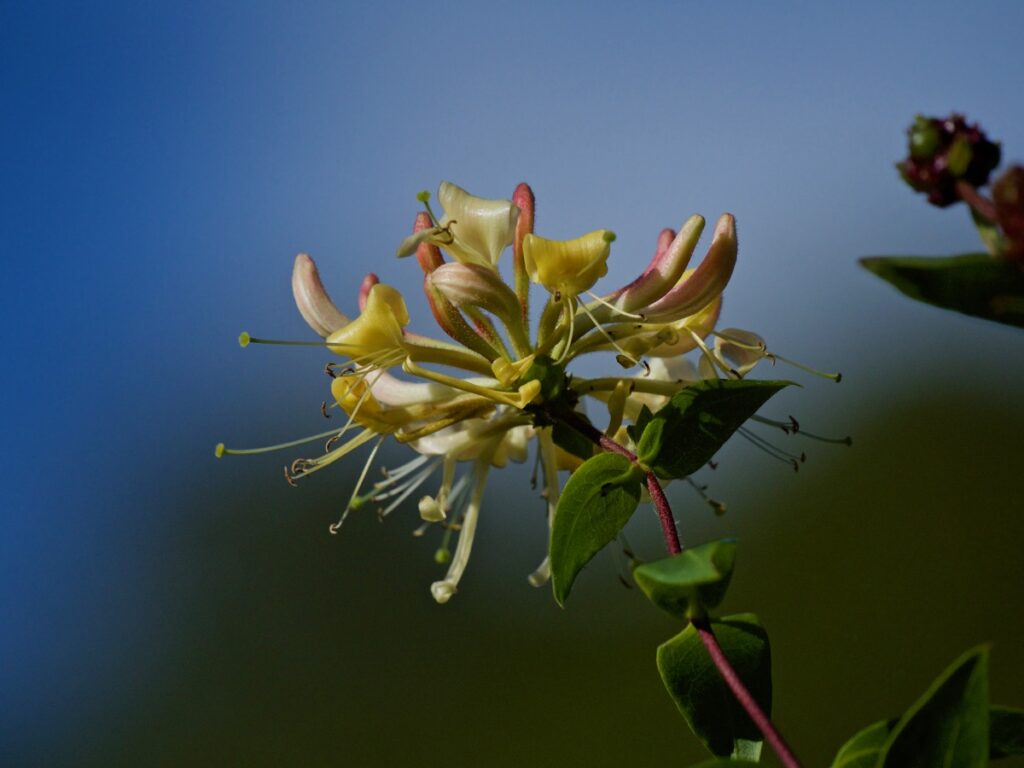 To begin with, it seems that honeysuckle (traditionally known as woodbine, for its twining habit) has long been regarded as a symbol of affection and fidelity. In her book, Britain’s Wild Flowers, Rosamond Richardson writes that it was “traditionally presented by lovers to each other to demonstrate undying passion.” She adds that it was often planted to enclose a garden bower, and the fragrance was said to induce dreams of love.

In his play ‘A Midsummer Night’s Dream’, Shakespeare makes full use of these romantic associations. Oberon, the king of the fairies, is jealous of his wife Titania’s wayward affections and is planning his revenge. While she sleeps, he anoints her eyes with the juice of a flower called love-in-idleness, so that she will fall in love with the first creature she sees. Oberon describes her floral boudoir:

I know a bank where the wild thyme blows,
Where oxlips and the nodding violet grows,
Quite over-canopied with luscious woodbine,
With sweet musk-roses and with eglantine:
There sleeps Titania sometime of the night,
Lulled in these flowers with dances and delight.

Oberon’s plan works: the enchanted Titania falls in love with Bottom, a bewitched human actor who now has the head of an ass. She bids him:

Sleep now, and I will wind thee in my arms…
So doth the woodbine, the sweet honeysuckle
Gently entwist… 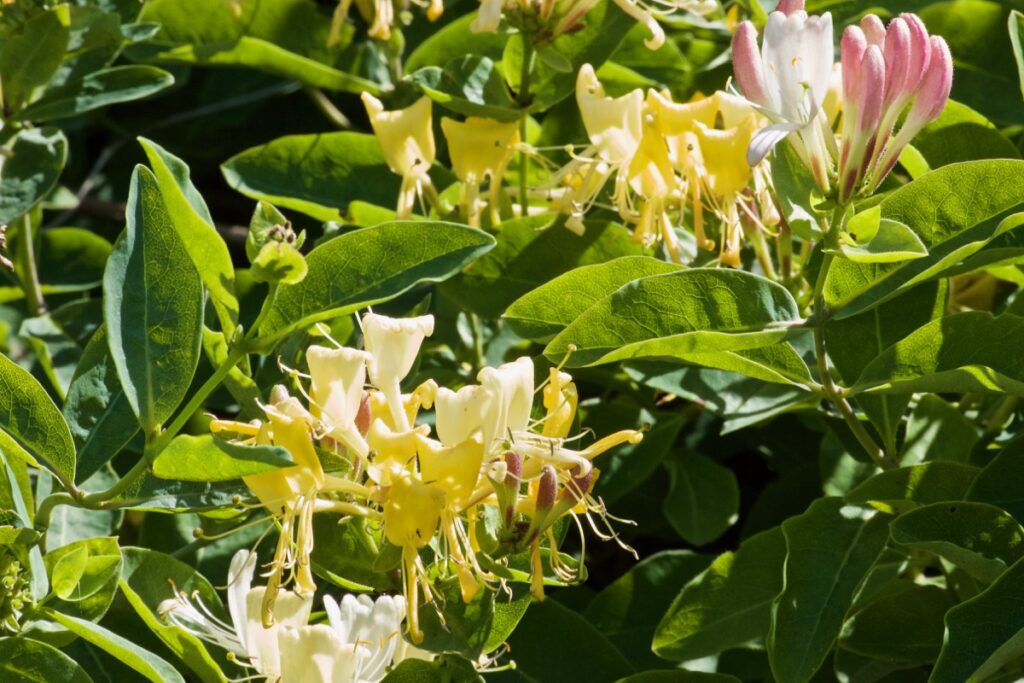 According to an old rural superstition, if honeysuckle is growing around the door of a house, it will bring good luck to the inhabitants and deter evil spirits from entering. Rosamond Richardson reports that farmers hung branches of honeysuckle in their cowsheds on May Day to protect the livestock from being bewitched, and she adds that the flowers carried into the house were said to bring money with them.

In his Flora Britannica, however, Richard Mabey cites several examples of folklore from around the country, warning against taking the flowers indoors. The possible repercussions included a sore throat and the failure of the second hay crop (not necessarily both at once!)

Strangely, the 17th century herbalist Nicholas Culpeper claimed that the leaves of honeysuckle were an effective cure for the sore throat, if used in a ‘gargarism’ (a mouth rinse or gargle). He adds: “Some recommend a decoction for a cough, and the phthisic [a disease of the lungs] and to open obstructions of the liver and spleen. The oil made by infusion of the leaves is healing and warming, and good for the cramp and convulsions of the nerves.” (The Complete Herbal, 1653). More recently, honeysuckle flowers have been used as a herbal remedy for a variety of complaints including bronchial coughs, asthma, rheumatism, colds and ‘flu. They are said to bring a delicate flavour to teas, vinegars, jams and jellies.

The name ‘honeysuckle’ may come from the age-old children’s custom of picking the individual trumpet-like flowers and sucking the tiny drop of nectar from the end; but the folklorist Richard Folkard says that it is “so called on account of the honey-dew found so plentifully on its foliage.” (Honeydew is a sticky, sugary liquid secreted by insects feeding on plant sap.) Honeysuckle’s old name of ‘goat’s leaf’ is said to come from its habit of clambering up into high places where only goats would dare to venture. Other names include ‘fairy trumpets’, ‘evening pride’, ‘honeybind’ and ‘hold-me-tight’. In the 17th century, Samuel Pepys mused that its “ivory bugles blow scent instead of sound.” 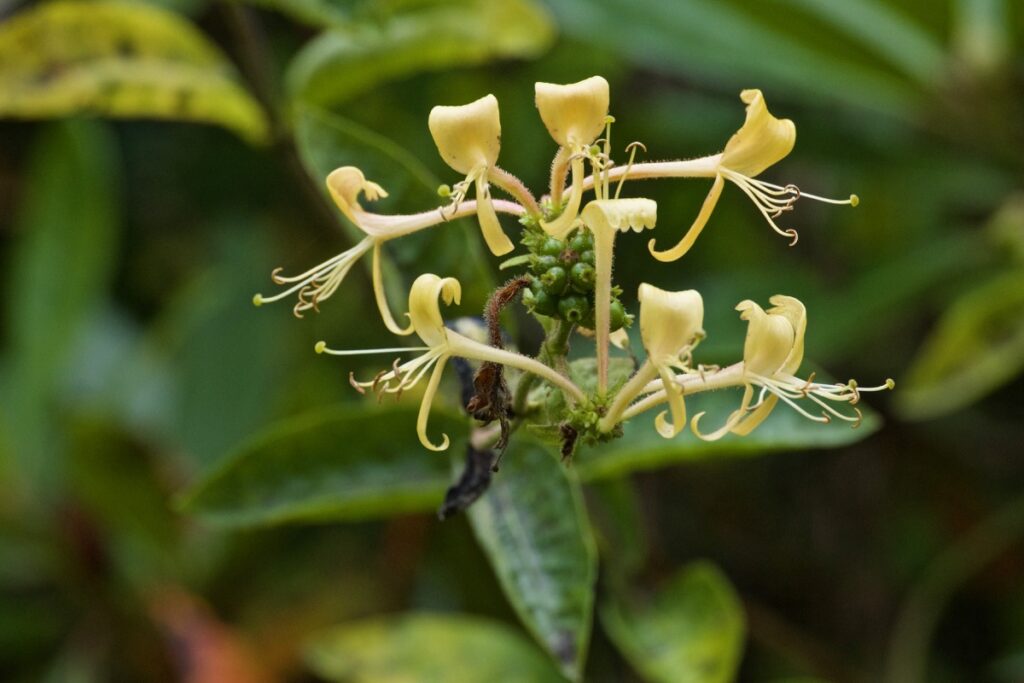 At some time in our distant past, it seems that the honeysuckle held an honoured place in the ancient forests that were trodden by warrior-gods and heroes. We can glimpse this in a lovely poem about trees, which appears in a medieval Irish text known as Aidedh Ferghusa meic Léide (‘the Death of Fergus’). In the poem, Iubhdán, the king of the fairies, tells the ruler of Ulster, Fergus mac Léide, which trees can be used for firewood; the consequences of making a mistake were much worse than a sulky fire! He warns that on no account should honeysuckle be burnt:

“Monarch of Innisfail’s forests the woodbine is, whom none may hold captive; no feeble sovereign’s effort is it to hug all tough trees in his embrace. The pliant woodbine if thou burn, wailings for misfortune will abound; dire extremity at weapons’ points or drowning in great waves will come after.”

Some remnants of the woodbine’s magic survived at least until the late 19th century: in 1884, Richard Folkard described its powers, and claimed that the plant was a favourite among the witches of Scotland:

“In olden times, consumptive invalids, or children suffering from hectic fever, were thrice passed through a circular wreath of Woodbine, cut during the increase of the March moon, and let down over the body from head to foot. We read of a sorceress, who healed sundry women, by taking a garland of green woodbine, and causing the patient to pass thrice through it: afterwards the garland was cut in nine pieces and cast into the fire.” (Plant Lore, Legends and Lyrics, 1884)

The so-called ‘witches’, of course, were the wise women of the parish or the district, who had perhaps inherited some of the most ancient wisdom of all… or knew where to go and look for it. It’s interesting to hear that at least one of them used woodbine with regular success.

Perhaps the woodbine’s magic has something to do with its spiralling growth. As its stems entwine themselves around a branch, they can eventually distort its shape as the tree grows to adapt. Straight rods of hazel and ash were particularly prized if they had been affected in this way, and they were cut for ‘barley-sugar’ walking sticks which have a characteristic twist. In Sussex, it was believed that the possession of such a stick was a guarantee of good luck, especially for a young man who wished to marry his sweetheart. 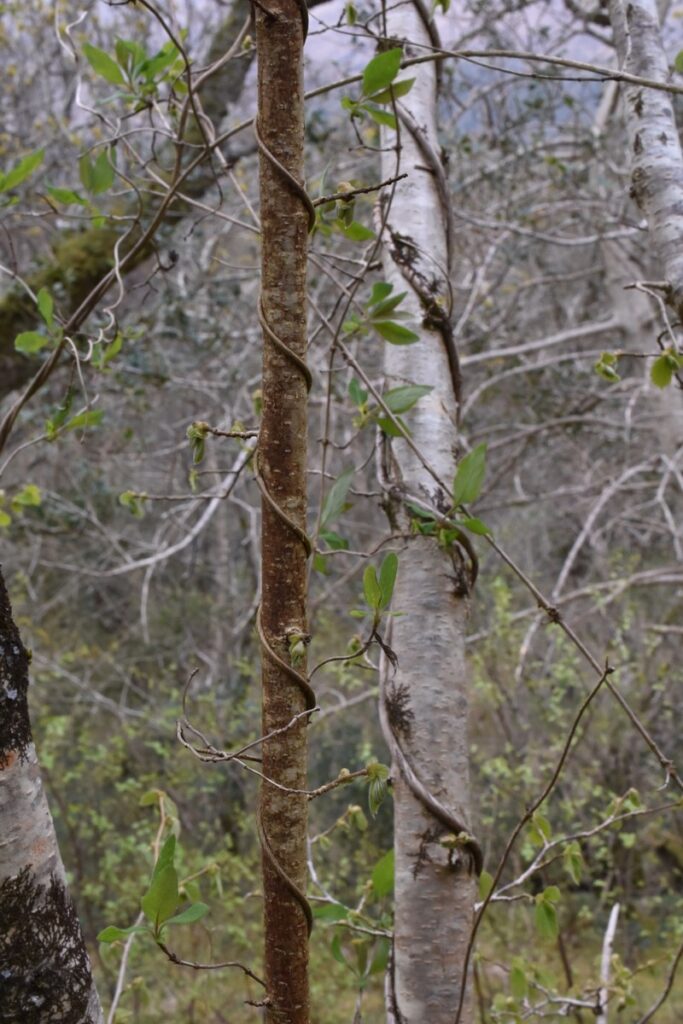 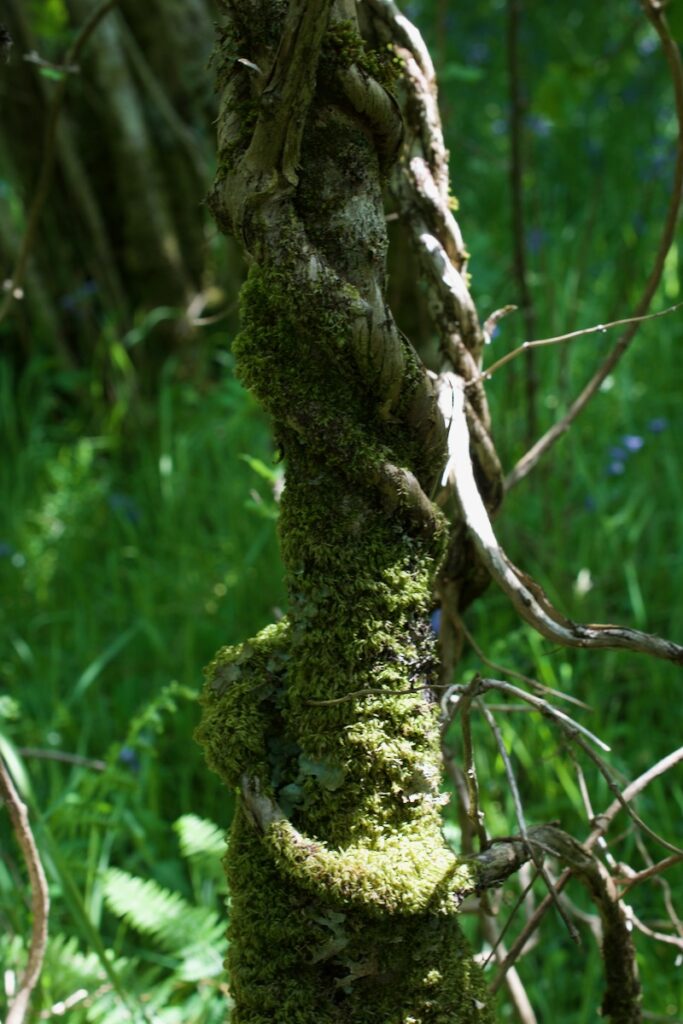 The fragrance of honeysuckle blossom is especially strong at night, attracting night-flying moths such as the elephant hawk-moth to feed on the nectar.  Bees love it too, and it is the sole food plant for caterpillars of the white admiral butterfly. As for the beautiful red berries, although they are mildly toxic to humans they are an important food source for a wide variety of birds and mammals. Thrushes and bullfinches feast on them, while dormice eat both the berries and the flowers, and use the bark to build nests for their young.

The summer-flower has run to seed,
And yellow is the woodland bough;
And every leaf of bush and weed
Is tipt with autumn’s pencil now.

The woodbine-trees red berries bear,
That clustering hang upon the bower;
While, fondly lingering here and there,
Peeps out a dwindling sickly flower.

John Clare, extract from ‘Autumn’, The Village Minstrel, and Other Poems (1821) 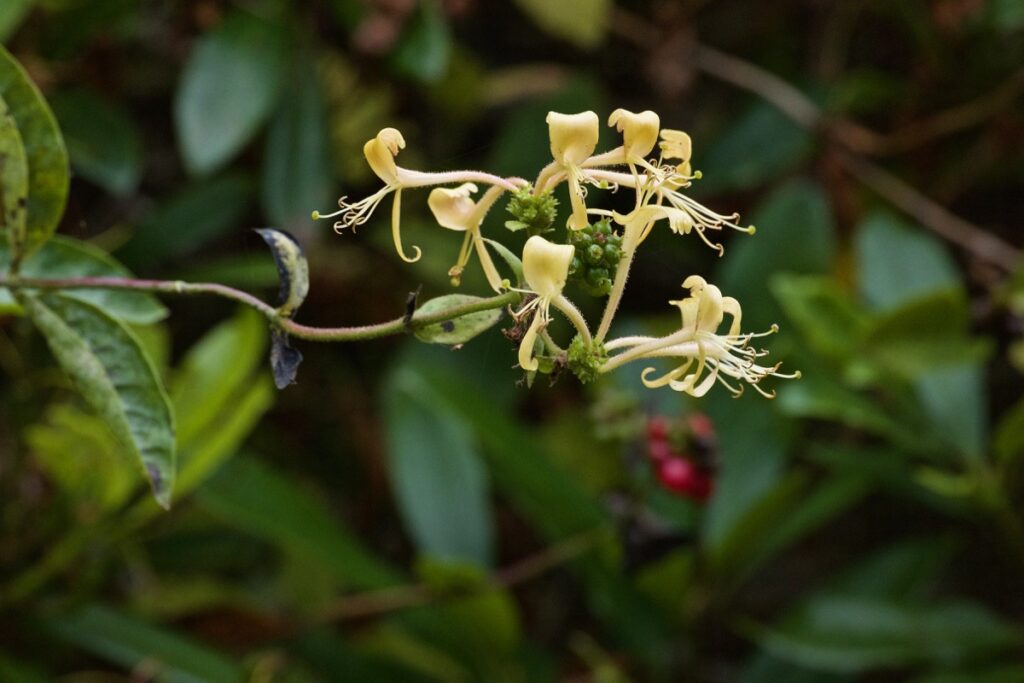