For a while now I’ve been looking at the database of Canmore and pondering over an interesting cross-carved stone located somewhere in the woods on the east side of Loch Sween. It was said to be early Christian, but there was no trace of a chapel nearby, and it seemed to be in such an obscure place, hidden and forgotten, that I wondered why it was originally chosen.

Since we now seem to be so skilled (or at least, Colin is!) in locating obscure and overgrown sites in the middle of dense woodland, I left the maps at home but at the last minute remembered to wear my new wellies. These don’t have quite the same patina as my old ones but they have the kind of soles that should keep me stuck to slippery rocks even on a 45-degree slope. I’m not actually going to test that.

The road that leads down Loch Sween is one of my favourites, winding through dark mossy woods of conifer and birch with shallow tidal inlets glittering through the trees. When the landscape finally opens out, there are breathtaking views right down the loch towards Jura and Islay. Groups of deer – red, roe and sika – graze beside the ruins of abandoned bothies. Until the 1800s there was quite a large human population here, but now there are more deer than people, and you rarely have to pull over for another car.

It wasn’t the most encouraging weather, with a cold easterly wind bringing spits of rain. At the mouth of the loch, the dark lumps of the MacCormaig Isles stood out in a steel-grey sea. We pulled off the road and then walked down a path through a mature forestry plantation. Cones of Sitka spruce littered the ground. Instead of heading across to the loch shore we turned south on a less worn track, keeping an eye open for natural outcrops of rock while listening to the wind hissing in the tops of the trees. 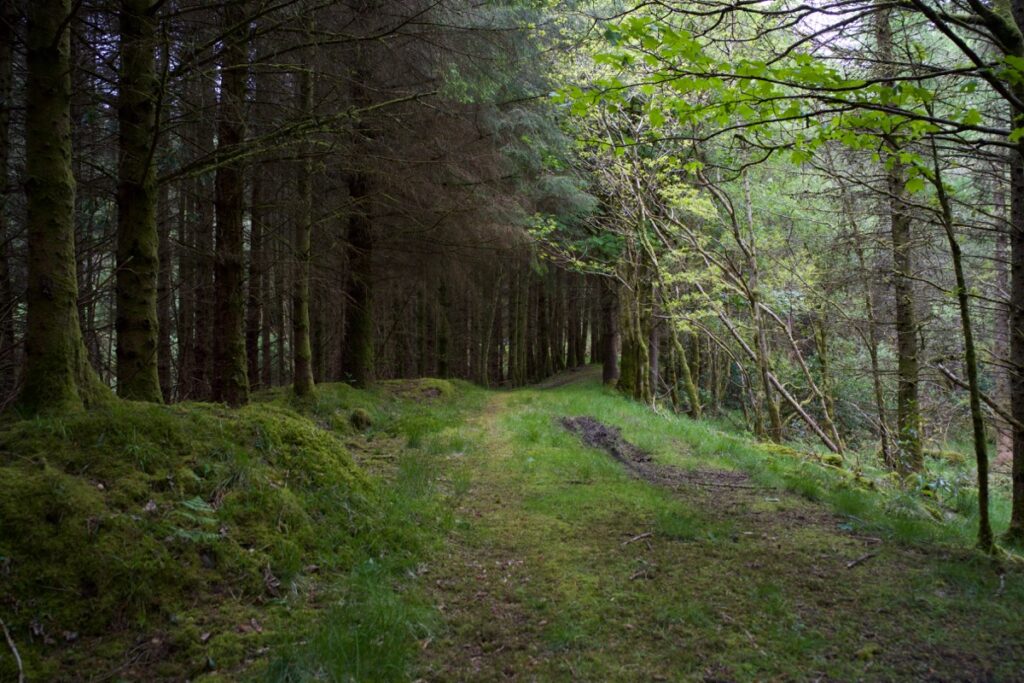 I don’t quite know how we found the carving – we just left the path to explore a little clearing, and realised that we were standing next to it. Two big slabs of rock, moss-topped, irregular in shape and each about three or four feet high, stand upright on the woodland floor like two thick slices of cheese. They are natural, I would say, but it’s hard to imagine their original environment because the forestry plantation is comparatively recent. At one time they might have been on a bare hillside, or at least surrounded by shorter trees such as birch, alder or hazel. 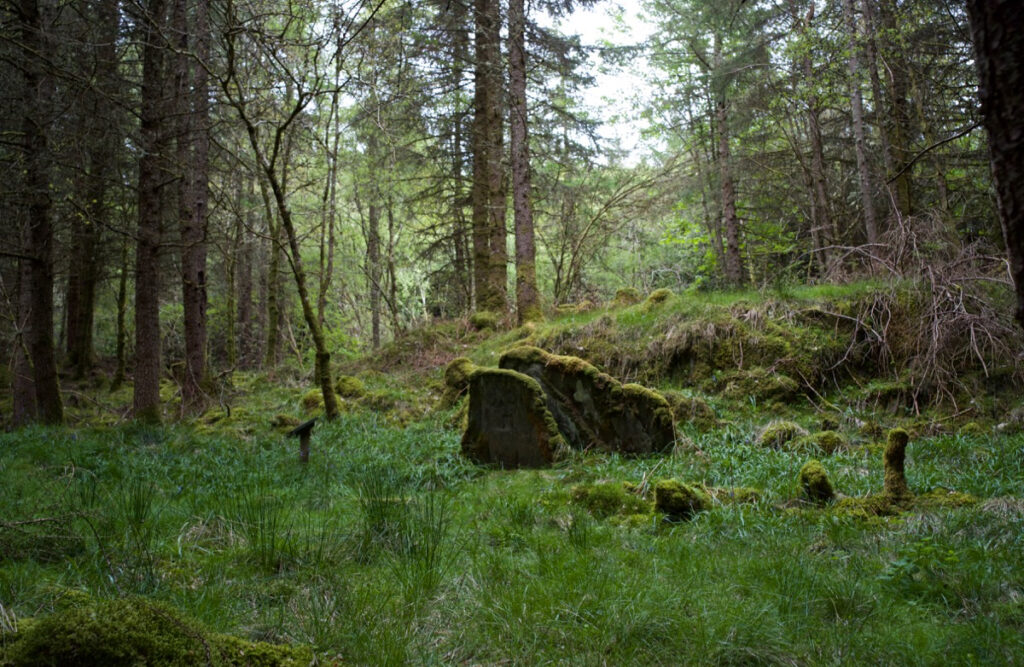 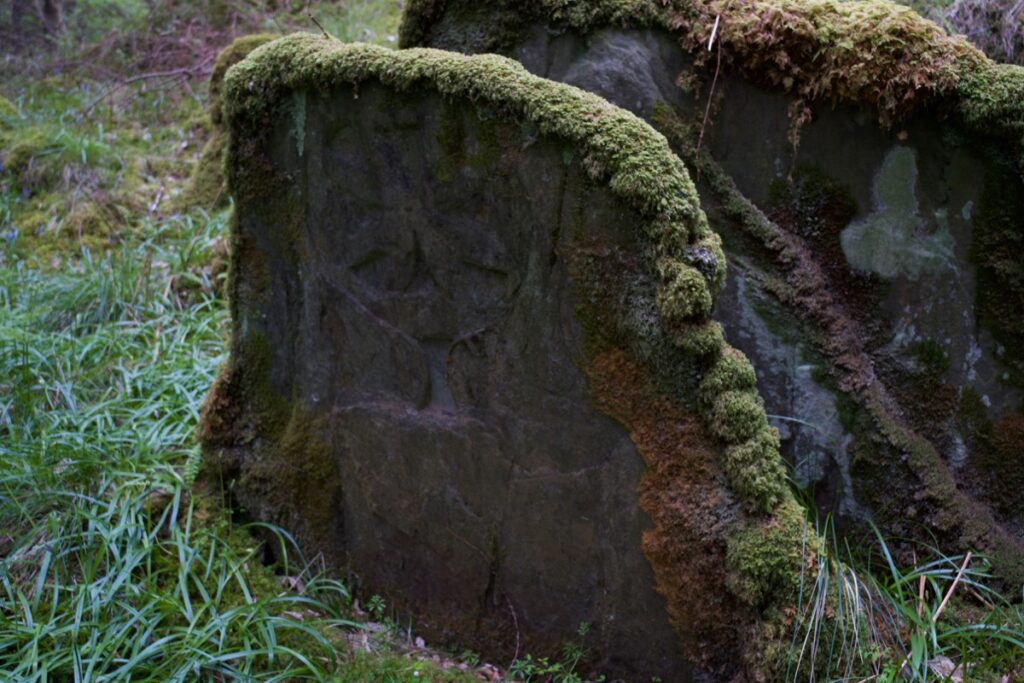 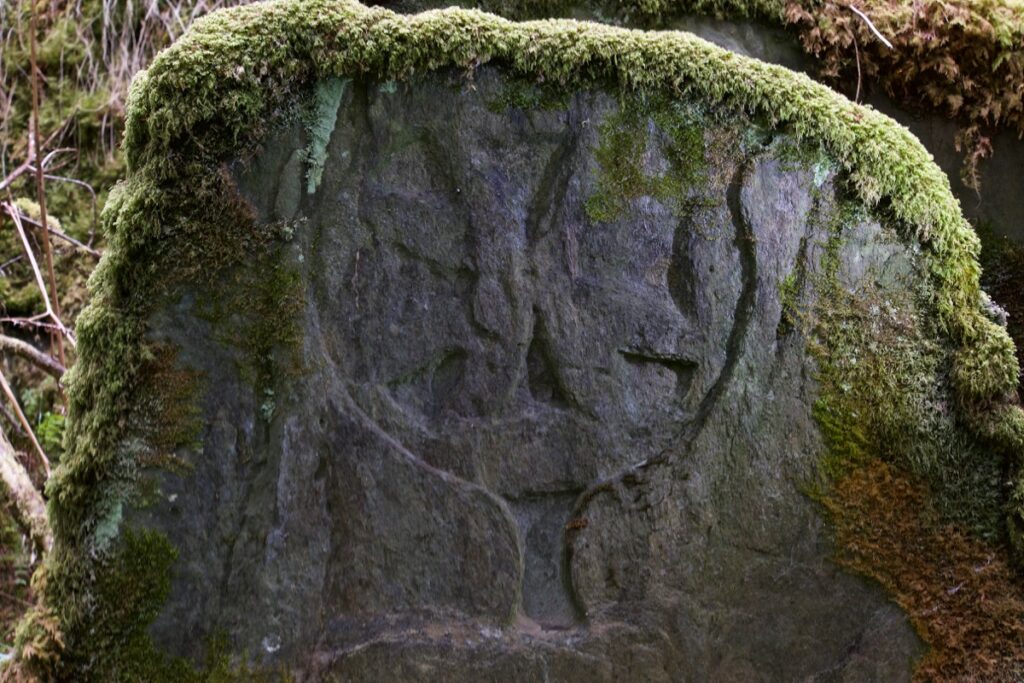 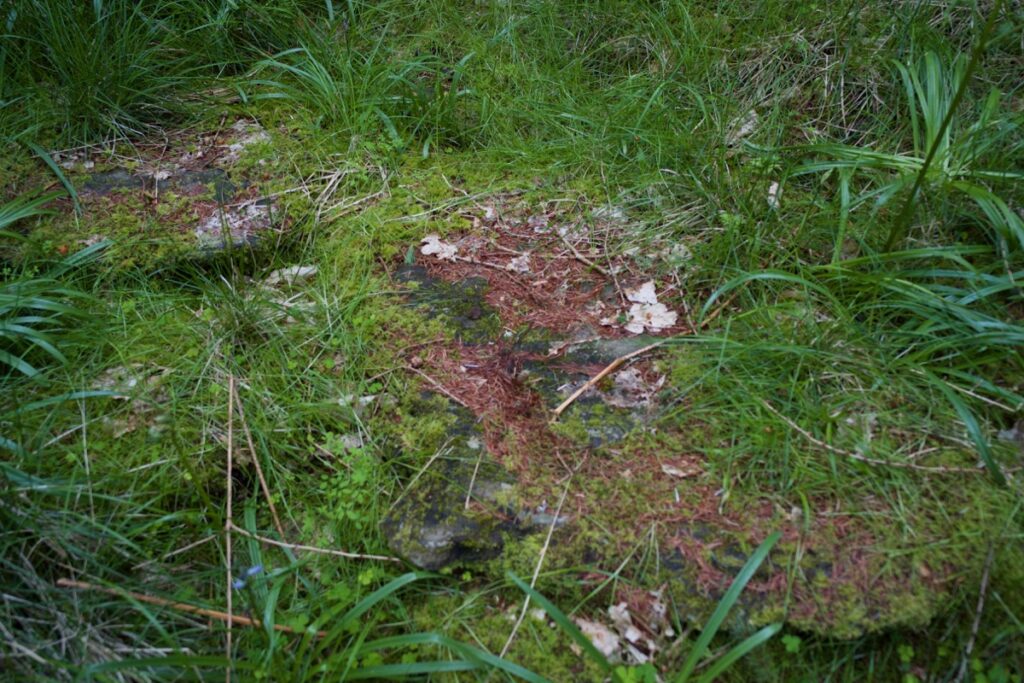 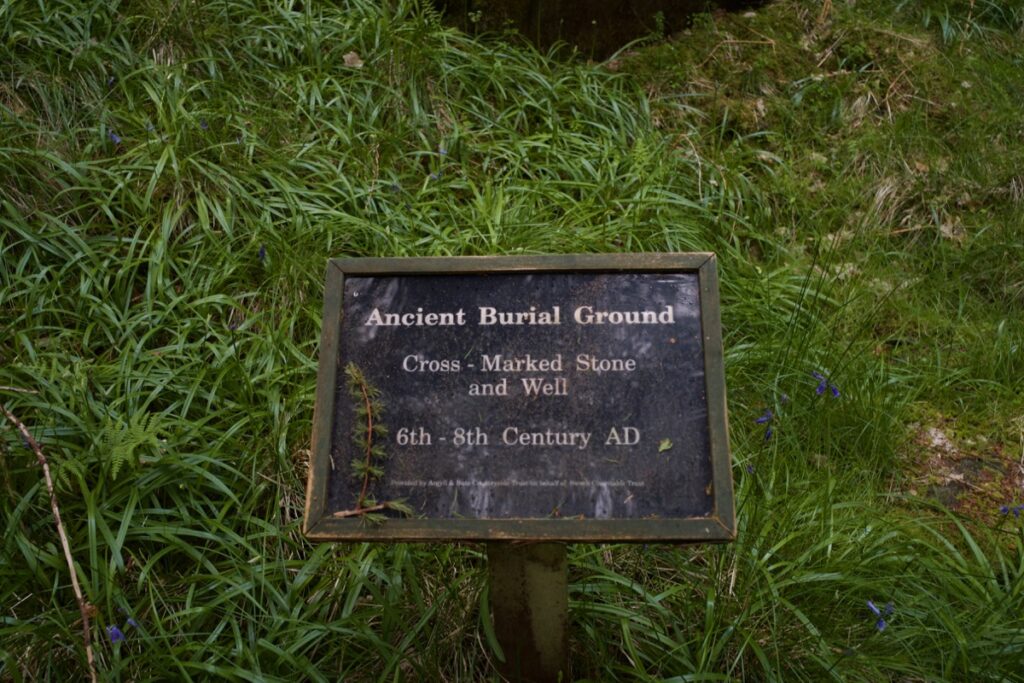 The site was obviously easier to recognise in former decades. Surveying it in 1964, Kilberry historian Marion Campbell reported that “a thick wall runs out from rock-wall on the E to form a rounded enclosure. Probable ruins inside wall, and small flat stones, probably grave-markers.” Nine years later, another survey noted a “much-mutilated” rubble wall enclosing the burial ground, but by 1984 the south part of the wall had been “obliterated by recent timber-clearance operations.” A survey from 2001 describes it only as a “possible” burial ground. There’s no mention of a chapel ever being here, although it could have been lost. If it was once the retreat of a saint, that in itself might have been enough to make it a place of burial.

Despite its overgrown state – or perhaps because of it – the site does have a gentle presence, perhaps enhanced by the fact that it occupies a natural clearing in the trees. It’s doubtful if it ever receives direct sunlight, yet it’s sheltered – a sylvan sanctuary. We became aware of a fairly distinct track, pitted with deer slots, leading past it and away into the woodland. Bluebells were coming up everywhere, and primroses had tucked themselves into the moist banks of a stream. 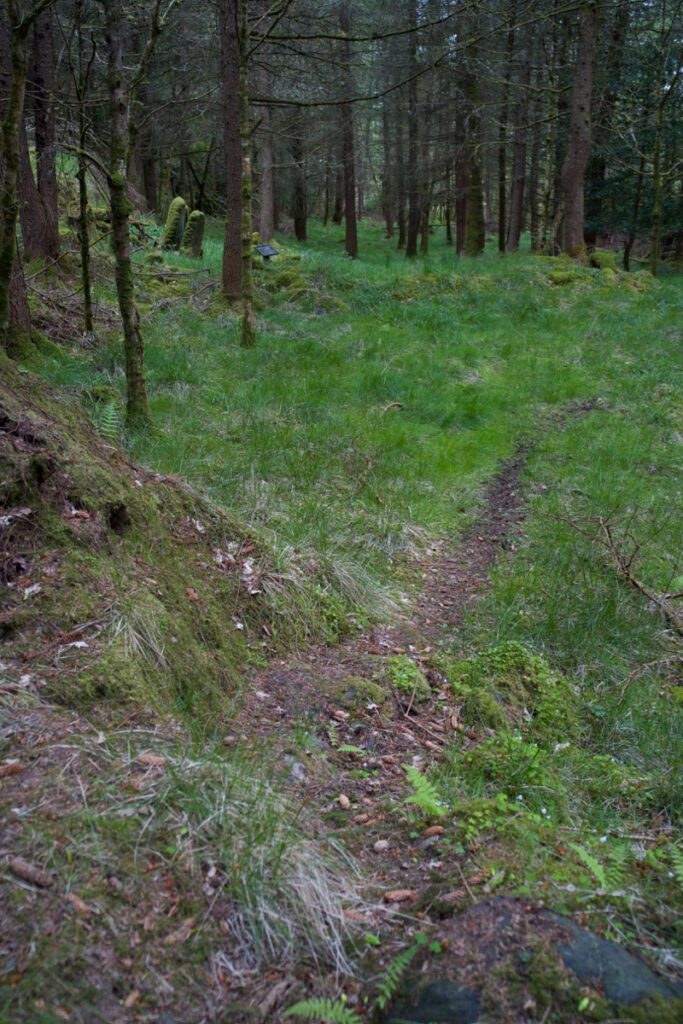 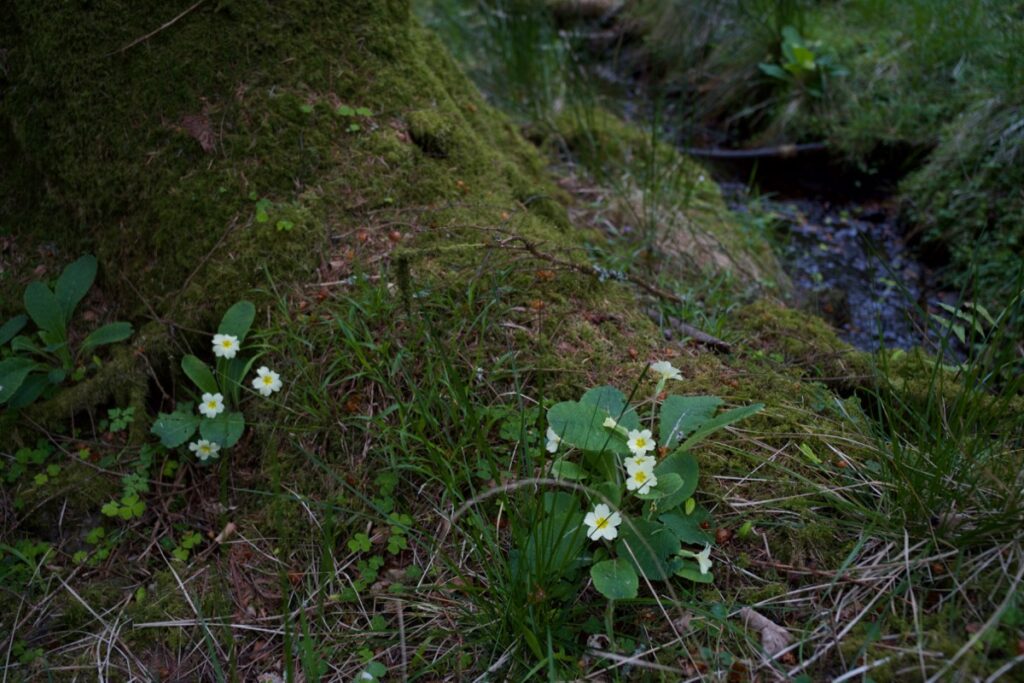 The stone interests me because of its design. Looking at the Canmore record (which shows a black-and-white photo of it in a much better state of preservation than it is now), the equal arms flare out gradually towards the ends, and in between them are inset four further triangles, pointing inwards. The whole design is contained within a circle. But if you look at it in a different way, suddenly it becomes an eight-petalled flower.

This is probably not at all significant! But it is intriguing also to note the ‘pedestal’ or ‘handle’ carved in relief at the bottom, as if the cross is being supported on a very slim shaft. In Volume 23 of The Kist (the magazine of the Natural History and Antiquarian Society of Mid-Argyll), F S McKenna compares this feature with Pictish ‘mirror’ symbols, and draws parallels between the cross itself and similar, early Christian carvings found at Whithorn and in St Ninian’s Cave in Galloway.  In a subsequent issue, however, he adds a further note that the whole design may represent a flabellum or liturgical fan. I had no idea such things existed. McKenna explains that these items were “intended originally to protect the elements of the Eucharist on the altar” and backs up his argument with references to the Book of Kells, which illustrates them. In other words, they were holy fly-swats, used to keep insects away from the consecrated bread and wine.

I do see what he means, but why should such a thing be illustrated here? Maybe it was intended to be symbolic, warding off anything that might pollute the purity of the water. Who knows? For some reason, and it’s totally illogical, it reminds me of something else: the enigmatic ‘Watchman Stone’ in the woods at the head of Loch Craignish. That one has a face, rather than a cross, within a circle, and it’s much smaller, but it’s perched, just the same, on a strangely narrow neck and it stands over a spring. Of course there’s a huge discrepancy in ages: the Watchman Stone can only be dated to the early 1700s, while this one is a thousand years older. I did say it was illogical. But maybe both were carved with the same intent: to evoke the guardian-spirit of the place, to perpetuate its invisible presence, and to warn passers-by to be respectful. 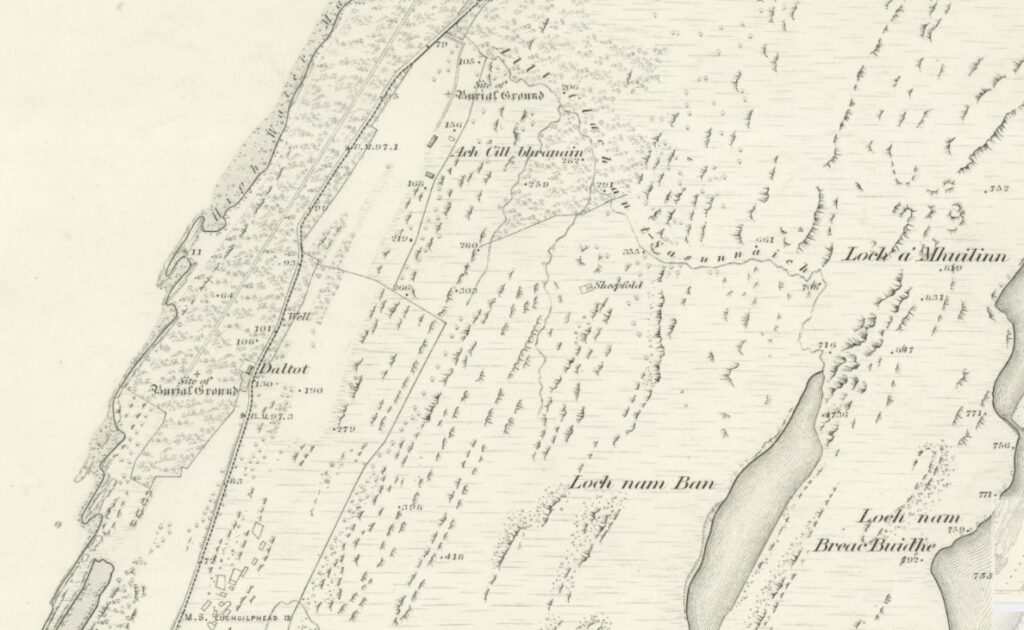 As always, old maps and place-name records reveal more places of interest. Less than a mile to the south (bottom left on the above map) are the remains of an old township whose buildings were marked as roofless on the OS map of 1873.  To the north, a burial ground called Cille Bhrennein or Cill-bhranain (Brendan’s cell or hermitage – just marked as ‘site of burial ground’ at the top of the map) is set in Ach Cill-bhranain (the field of Brendan’s cell). This could be the same St Brendan who was known in the 6th century as ‘The Navigator’ for his legendary voyage in search of the Isle of the Blessed. He is remembered also on the Garvellachs, at Kilbrandon on the Isle of Seil and at Kilbrannan Chapel at Skipness. If he was here on the shore of Loch Sween, maybe his wandering footsteps led him to this spring, and inspired him to have the cross carved above it. 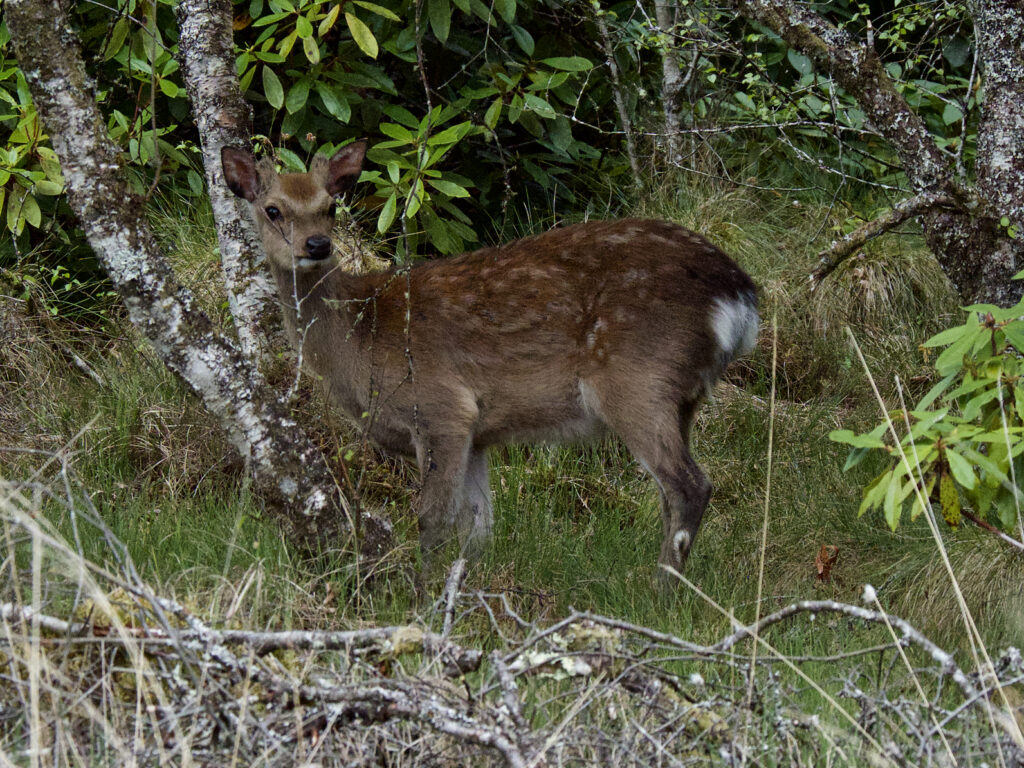