A friend, who is an inexhaustible supply of local anecdotes, told me about a stone. He said it was carved with the image of a deer, and it once marked the boundary between the land of Dál Riata, here on the west coast, and the Picts to the east. It was situated somewhere beside the Barbreck River, in Glen Domhain.

As you can imagine, this stone has been at the top of my list of things to find ever since I heard about it. On Thursday, fancying a walk that would tax our legs a little bit, we went to have a look. 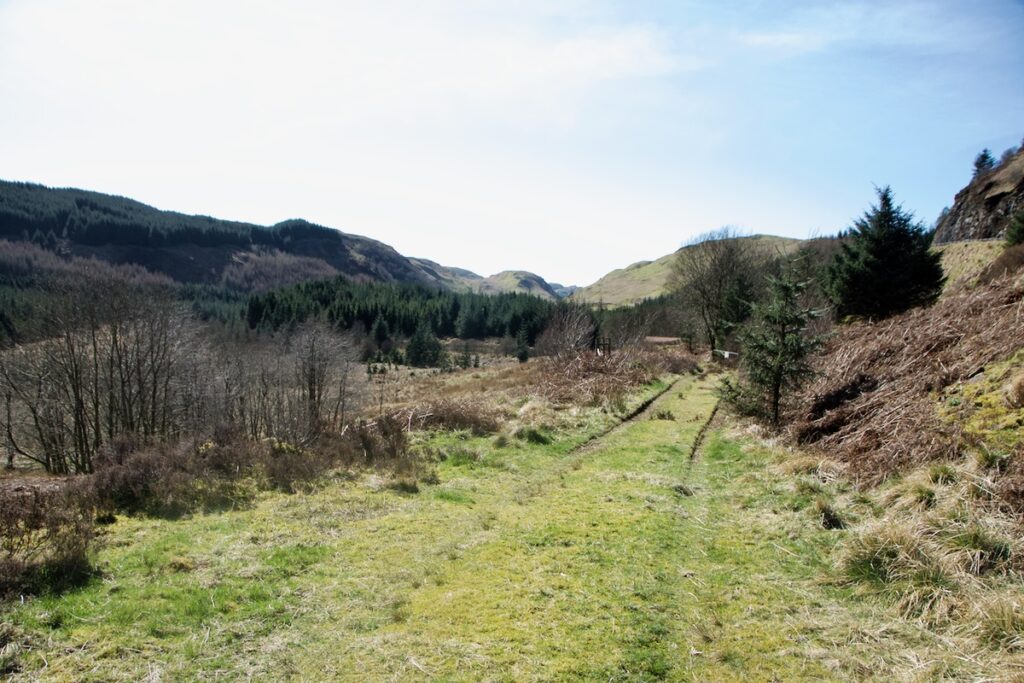 The weather couldn’t have been more enticing. It was sunny – only 12C, but it felt warmer – with hardly any wind. We started out on an old farm track through forestry plantations, and then turned to follow the Barbreck River as it meandered its way south-west between steep hillsides strewn with boulders and scree. 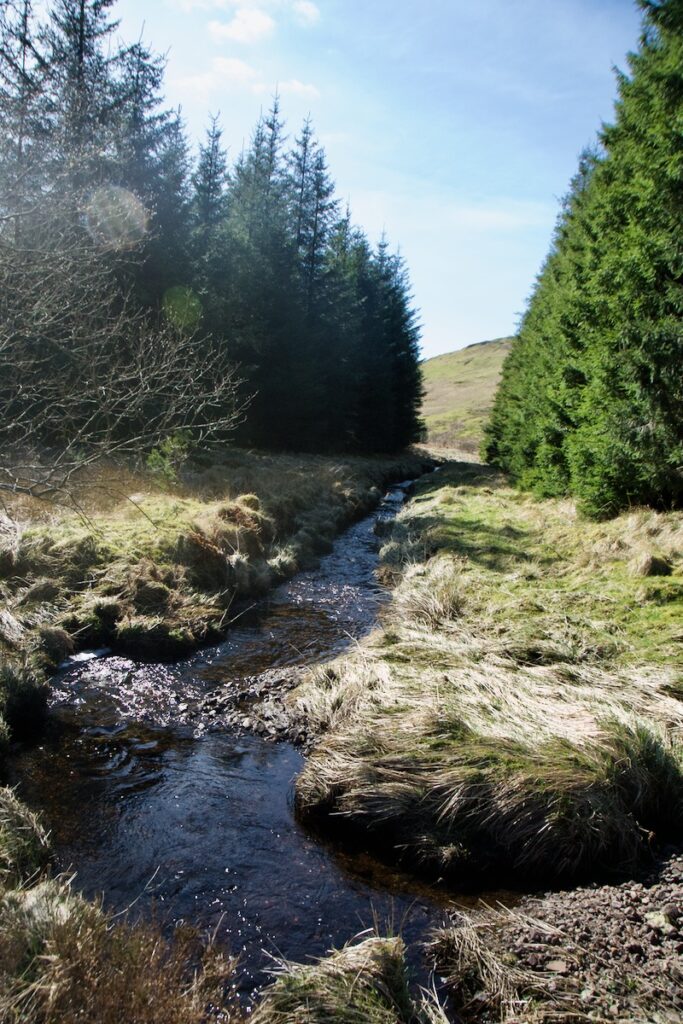 Once we’d left the track, the going became very boggy, very quickly. We were walking over a flood plain, after all, and it was obvious that in summer it’s overgrown with tall reeds. Amongst the hummocks of last year’s vegetation the green tips of flag iris were just emerging, giving a hint of the lush growth to come. Meadow pipits were singing and parachuting to the ground in their display flights, and waterfalls tumbled down from the hills on either side, with a roar that could be heard from quite a distance. 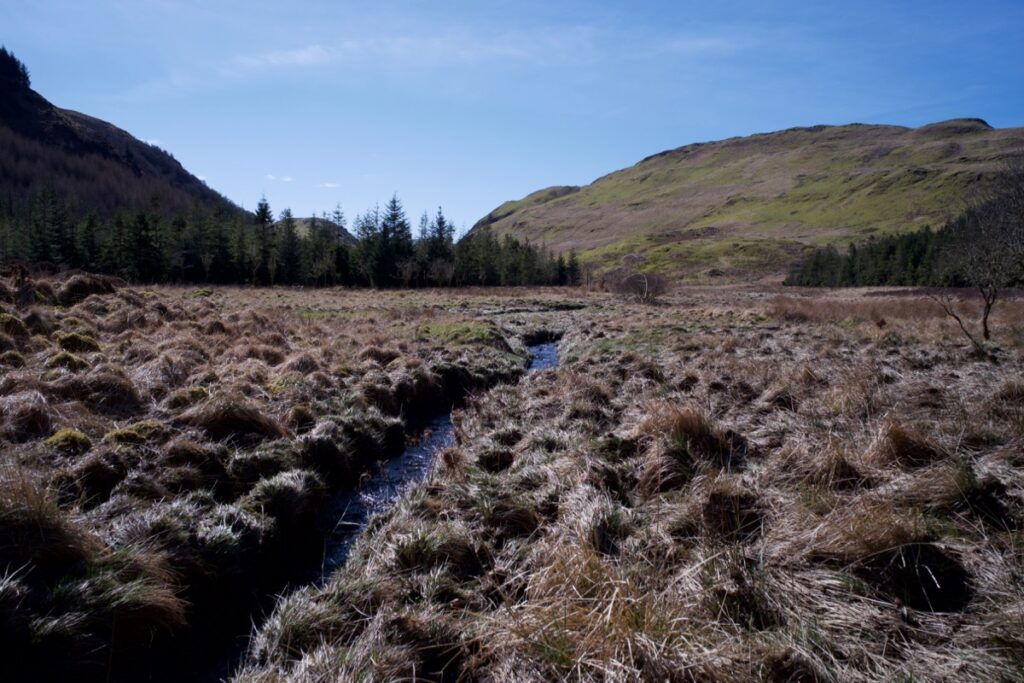 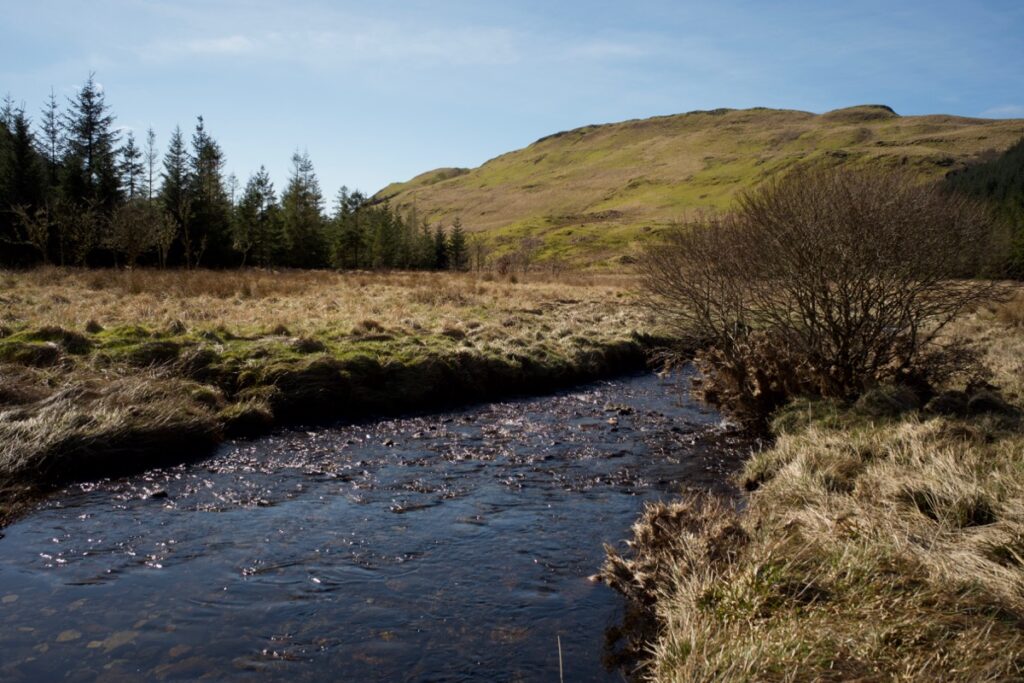 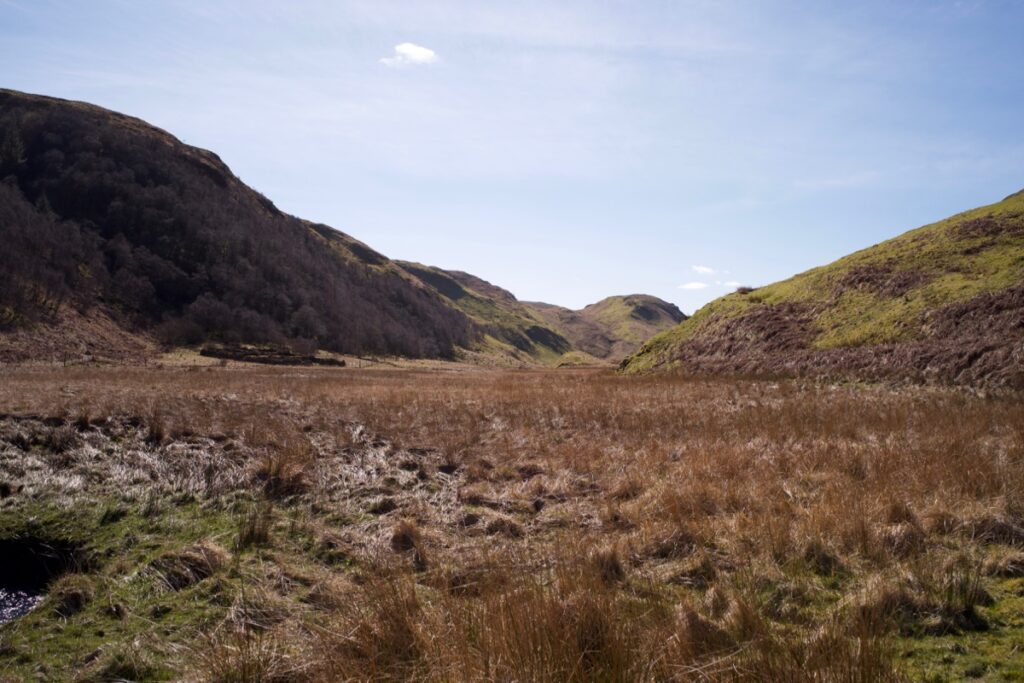 Across the river, a couple of ruined enclosures or sheepfolds could be seen, surviving only as a network of crumbling stone walls. We made quite slow progress, because we inspected most of the big rocks that had fallen from the rock faces above. 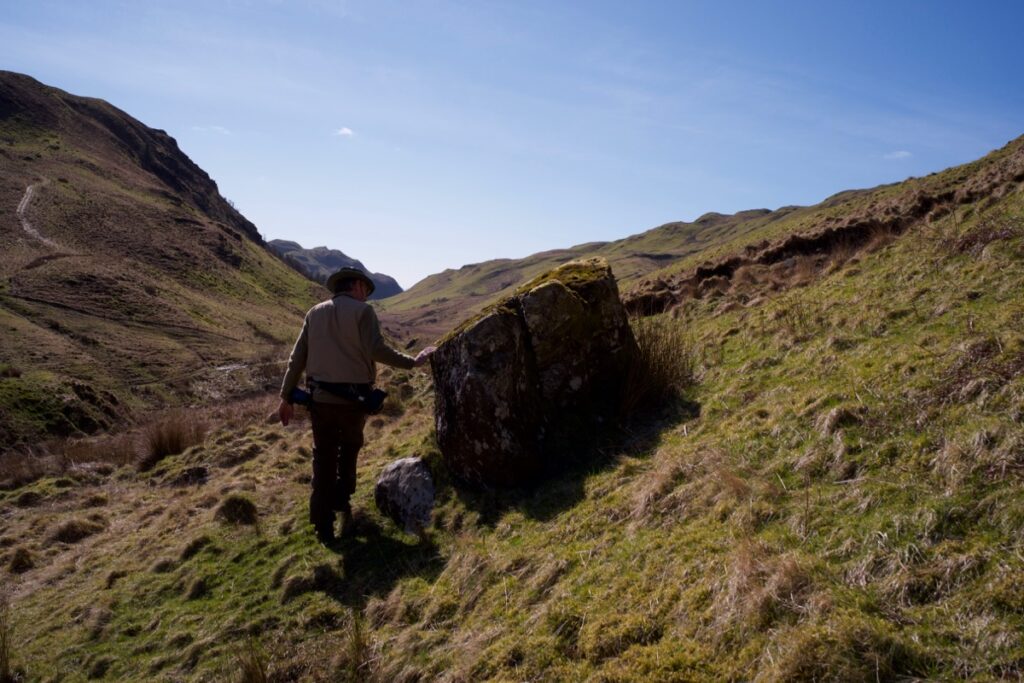 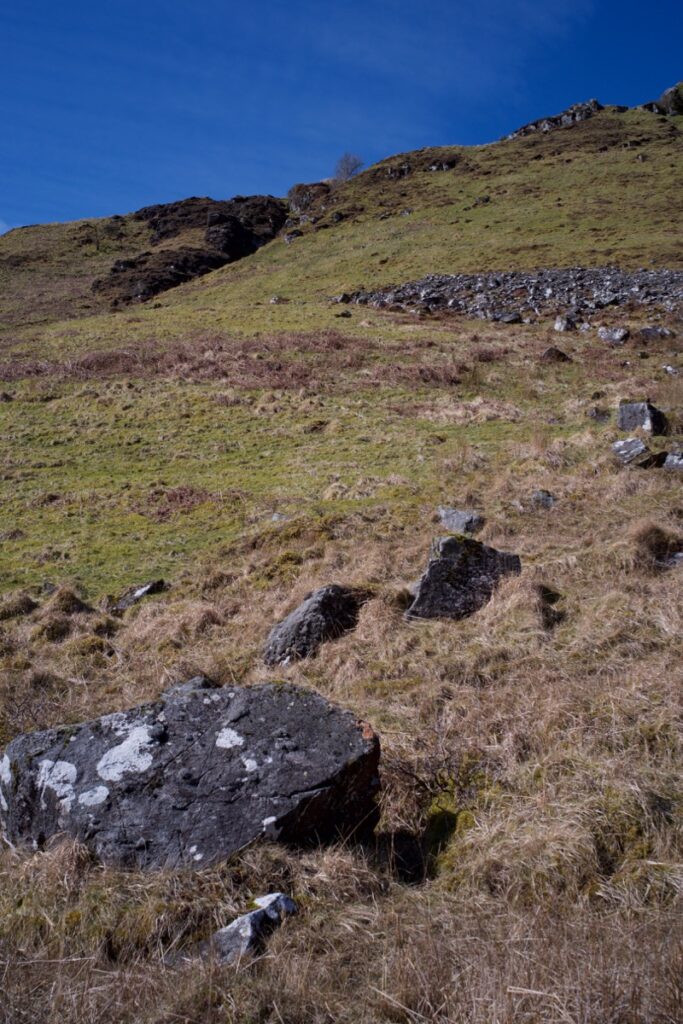 It was nearly two hours before we came within sight of where we thought the deer stone should be, and it still took a while to find it.  It is totally inconspicuous, because most of it is submerged in the bog. The exposed surface, only a few feet square, is gently sloping to the north-west. On the lower part of this, as we stared at it, the curving lines of a roe buck gradually appeared. First its back legs, then a body, then a neck and head – strangely elongated – with antlers. There’s even a hint of an eye, although this may be a natural mark in the rock. 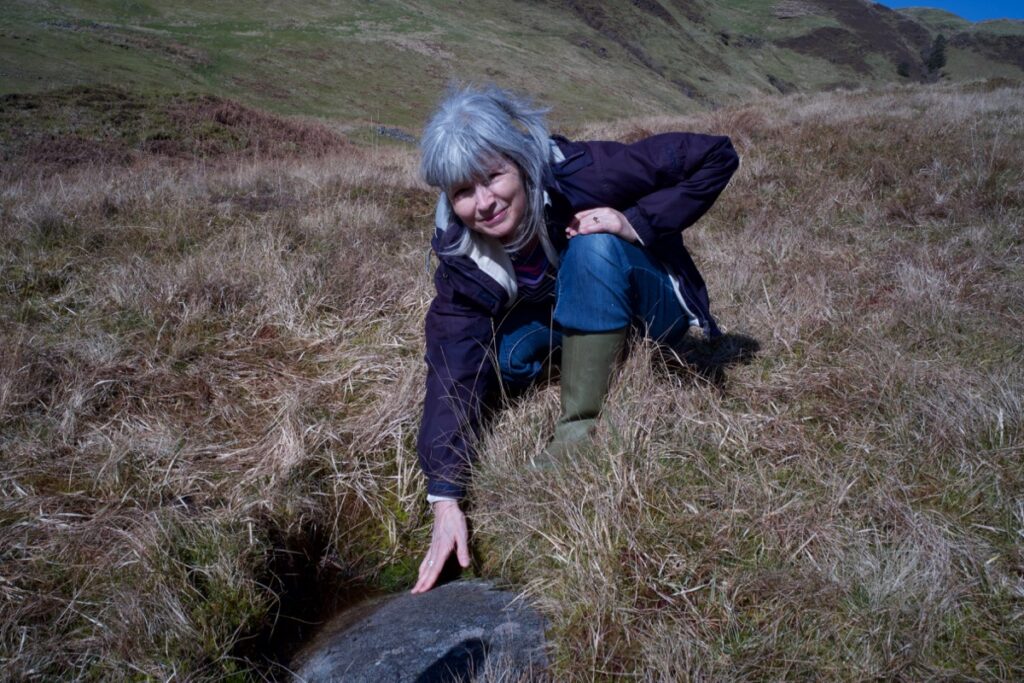 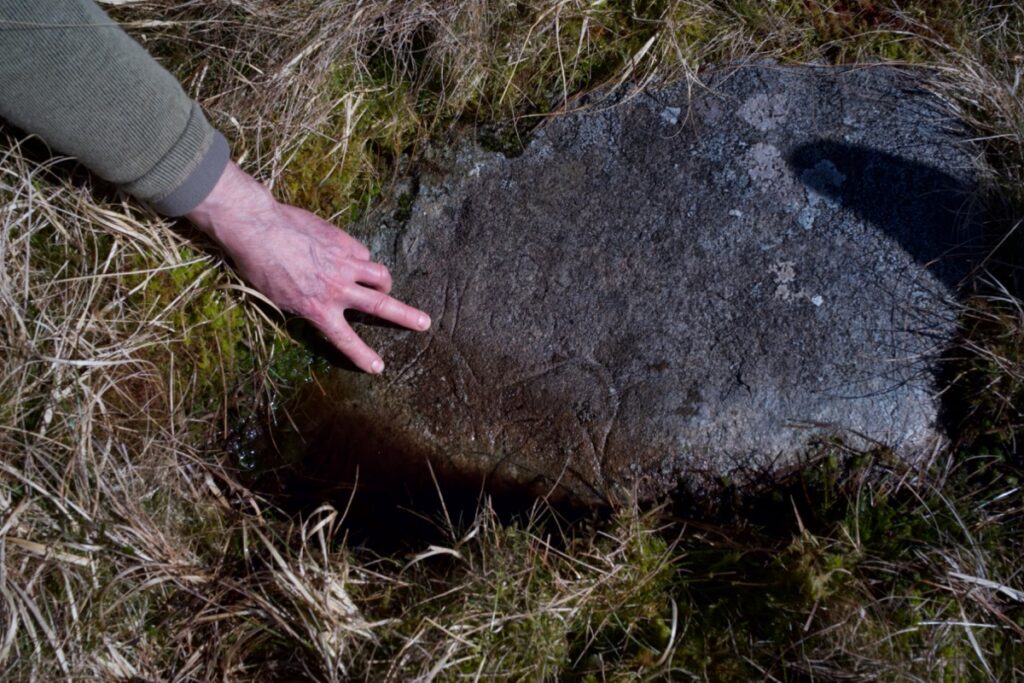 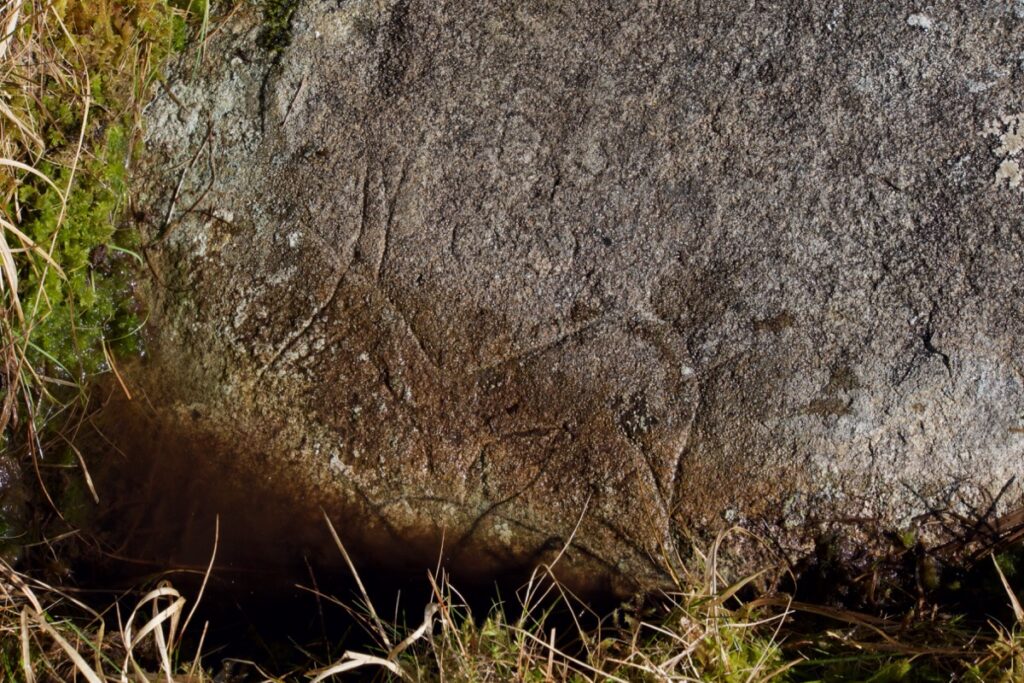 The pose of the animal suggests that you might be looking at it from an angle, with its hind parts closer to you and its head glancing back. And its feet are quite literally standing in brown peaty water.  It was so simple, yet strangely beautiful. It looked more like a glimpse, a sketch, than a study, although a sketch on solid rock is a bit of a contradiction. It had a feeling of something really old, and I loved it.

We weren’t tempted to follow the river much further, as it wasn’t easy going, so instead we turned and climbed the northern slope to investigate what the map said was an old farmstead called Blarantobair. Nothing much remains of this, apart from piles of rubble to suggest where the walls were, and the ghost of a once well-worn track. The tobair element of the name means ‘spring’ or ‘well’, and we could see, from a very green patch of moss, that a spring was bubbling out of the hillside just a few yards down from the building. 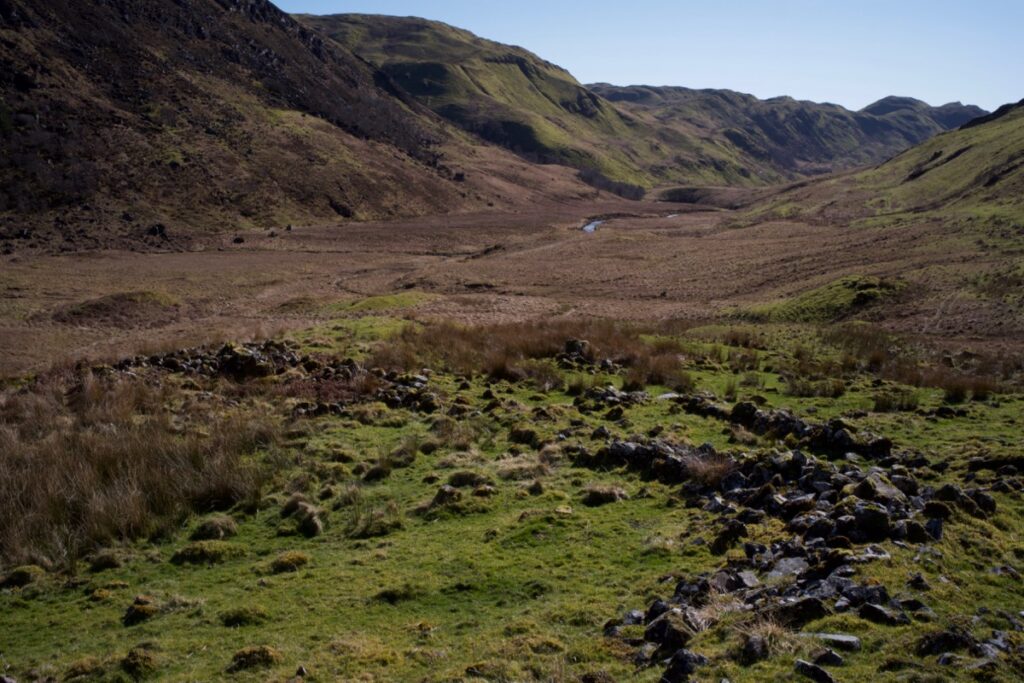 This is where things started to get tricky. We were now on quite a steep slope, and I was wearing wellies with soles that are as bald as a coot. I’ve had issues with them before, but somehow I still keep wearing them. While wading through the flat muddy swamp I was pretty glad I’d chosen them, but on a sloping muddy swamp I wasn’t so sure. Plus, I’d got a rucksack and one of Colin’s precious cameras. Anyway, things went quickly pear-shaped. Having fallen onto my backside once, I told myself that the resulting coolness was actually quite refreshing; this worked wonders because it happened again. The second time was funnier, once I’d given Colin his camera back. 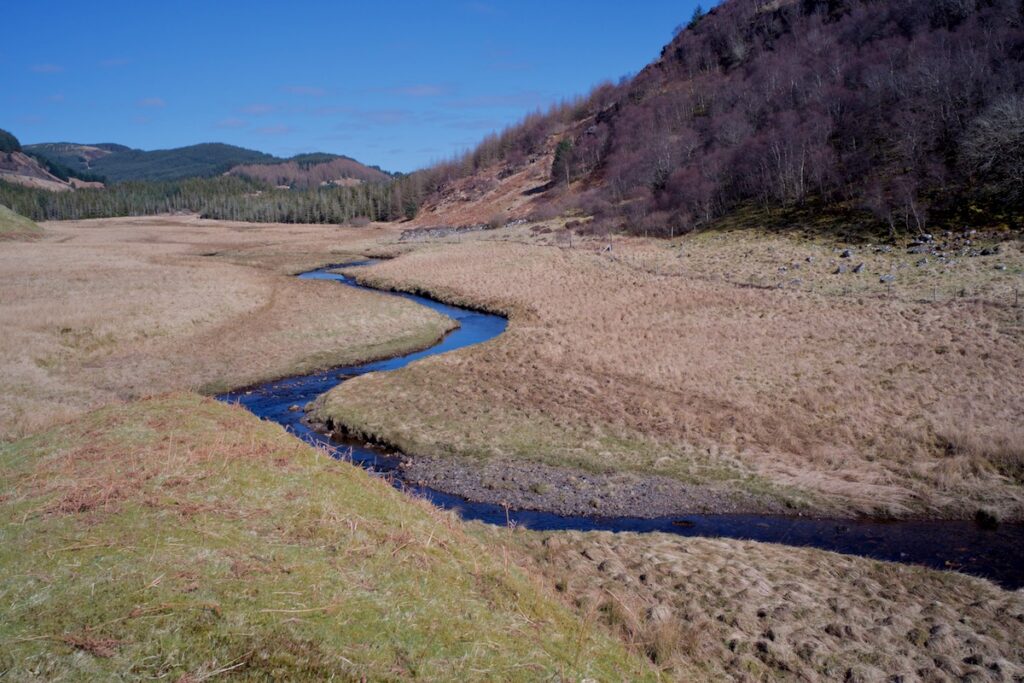 Home and (eventually) dry, I set about looking for references to this lovely little deer, and found a surprising number of them. I’ll start with the oldest, and work forwards. This is by no means comprehensive!

In 1941, the Australian archaeologist Vere Gordon Childe described the stone in a paper published in Antiquity. He admits that he would never have found it, “but for the guidance of Mr MacLullich, the former game-keeper at Barbreck House.”  He calls the deer a “hind”, so he must have missed its antlers, but he immediately saw a difference between its sharply cut outline and what he calls the “coarsely ‘pocked’ Bronze Age carvings so common in the county.” By this, I assume he means the cup-and-ring marked rocks. He also thought the “naturalistic” representation of the hind was quite different from the stylised and sophisticated boar carving at Dunadd, which is thought to be Pictish. He continues:

“The Barbreck hind is in fact treated with the same directness as characterizes the art of Stone Age hunters, and in particular the ‘Arctic’ rock pictures of Norway and northern Sweden. Mr M C Burkitt [Miles Crawford Burkitt, a British archaeologist] confirms its similarity to the earlier Scandinavian group. It would be tempting to see in our hind a hint of the former presence in Scotland of hunters sharing artistic traditions with the Scandinavian artists of the later Stone Age.” 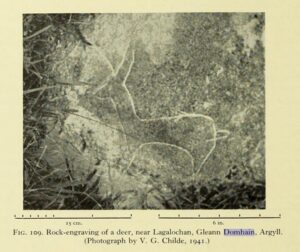 In his book, ‘The Stone Age in Scotland’ (1954), A D Lacaille agrees with this theory. He says: “…it is tempting to think that in Argyll there may have existed hunters who were contemporary with some of the later Obanians*, and who had inherited artistic traditions from, or shared artistic traditions with, Scandinavian artists of the later Stone Age. This is suggested by a small naturalistic rock-carving… of a deer near Lagalochan in the wilds of Gleann Domhain…” Lacaille continues, rather sniffily: “If it could be proved to be referable to men living in a stage of true Stone Age culture, then it would be of far greater account than the few scratches on some Obanian bones which, as feeble attempts at decoration… are so far all there is to suggest that any artistic sense was found among the early food-gatherers in Scotland.”

*Without going into too much detail, Lacaille considers that the ‘Obanian culture’ belonged to the Mesolithic era in Britain. I feel sorry for the Obanians, because they were probably doing their best, but we can’t all be Leonardos or Michelangelos. 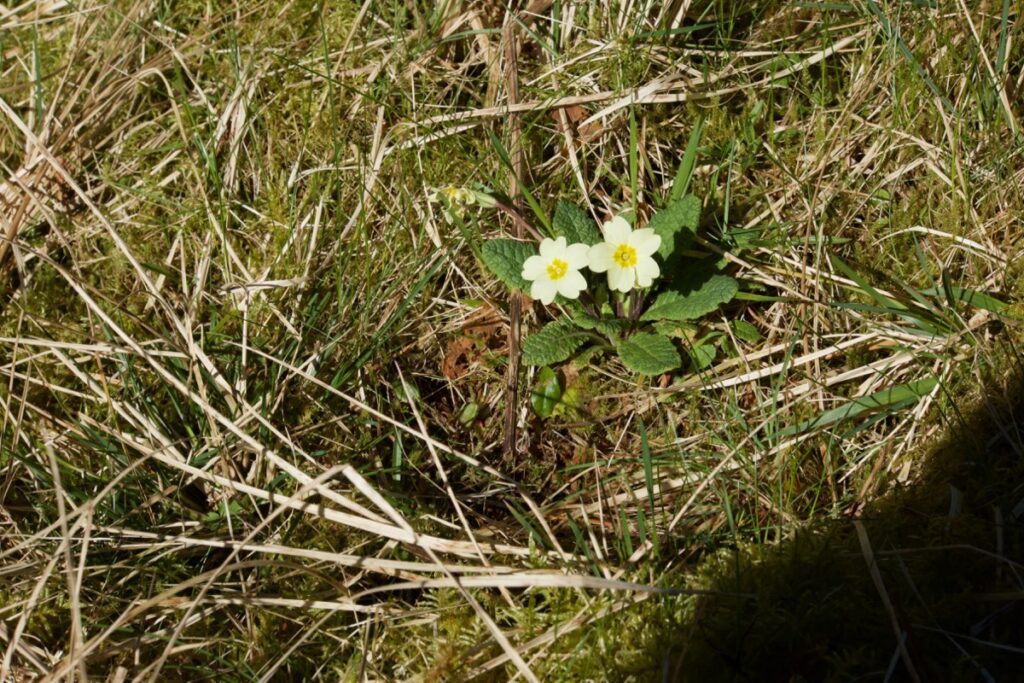 Then we have Charles Thomas, writing in The Archaeological Journal in 1961.  He is not at all in agreement with Mr Childe or Mr Lacaille. He compares the roebuck of Glen Domhain and a fish (of similar style) carved in the South Esk Gorge in Midlothian with designs on fragments of Iron Age pottery from the islands of Lewis and Coll. He says:

“It is clear, both from the sites from which these sherds came and from the associated material, that all belong to the ‘late’ or ‘Roman’ Iron Age of western and northern Scotland, a period which must be taken as commencing only slightly before the 1st century AD and which, on the evidence from Jarlshof, was culturally exhausted rather before the arrival of the Norse settlers in the late 8th century.”

Thomas sees the deer not as a hind but as a roebuck, and claims that it is “…too confidently sketched – the bold curves which form its body hint at a wary poise, almost in three-quarter view – to be associated with the later (Bohuslän) rock engravings of the Scandinavian Bronze Age, as has been suggested, even if the latter school were otherwise represented in Scotland…”

Local historians Marion Campbell and Mary Sandeman surveyed the site, and their findings were published in ‘Mid-Argyll: A Field Survey of the Historic and Prehistoric Monuments’ (1964, Proceedings of the Society of Antiquaries of Scotland).  They noticed similarities with a lesser-known carving at Dunadd, one that I have yet to find. It is apparently located on the main terrace, near the well, and comprises “a lightly incised animal with erect, ‘fir-tree’ tail, dog-like head and possible collar, about 9 in. overall.”  (Since Dunadd was the power centre of Dál Riata, this brings me back to the first story I heard, that the deer stone marked the boundary between the land of Dál Riata and the Picts.)   They also wondered whether a nearby mound was artificial.  We looked at this from a distance and wondered the same. 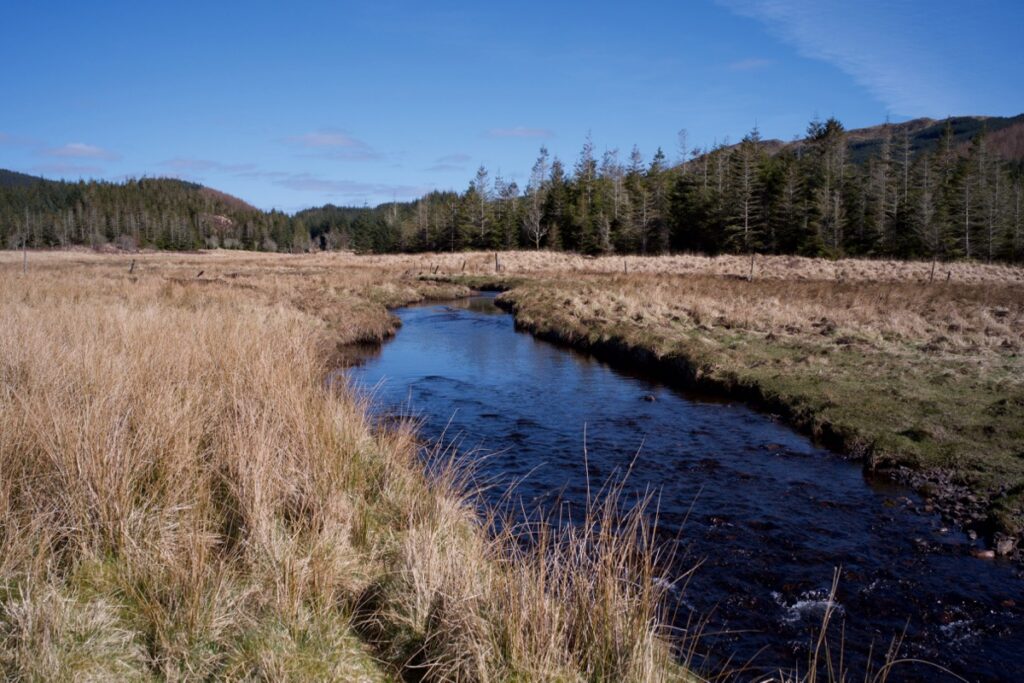 In a paper entitled ‘The Pictish Animals Observed’, (1967, Proceedings of the Society of Antiquaries of Scotland), C A Gordon compares the Glen Domhain deer with a number of Pictish animal carvings in Scotland. The deer is assumed to be much earlier in date than the other carvings under examination. There is some debate about whether the deer originally had a tail, or whether it was a later ‘improvement’ (it is now so subtle as to be invisible). An ‘extra tine’ projecting from the forehead is considered to be either a natural fissure in the rock or an artistic addition in later years. A local legend is mentioned, that this stone marks the spot where the last reindeer in Scotland was killed (Canmore cites Argyll County Council, 1914). Gordon dismisses this as nonsense: “Apart from the late and romantic aspect of the story, this is no reindeer.” The paper concludes with an interesting observation, coming from a historian who is also sensing something much deeper and seeking to explain it with modern logic:

“These portraits are magic art, working magic, of a sort which is to be distinguished from the magic of fairies and giants: there is a serious purpose behind our stones and it is a magical one.”

A survey dated 1992 on the Canmore database throws doubt on previous claims that the deer was of Neolithic date, because the outline seems to have been incised with a sharp tool and is “comparatively unweathered.” It concludes that it may be fairly recent in origin, “perhaps associated with Blarantobair or one of the other small settlements to the N.”

We chatted to a local farmer on our way out. He, of course, knew about the stone because it was on his land. He told us how, in his grandfather’s time, horses were bred and kept on the hills around here, and then taken to Oban to market. He said he could imagine someone watching the animals and picking out the carving just to pass the time of day.

What is so lovely about features like this is that they are open to individual interpretation, and we see in them what we wish. Personally, I’m not at all convinced that the deer is recent. If it is, the artist has managed to capture the impression of a creature seen through eyes that are very far away in time from our own. Part of me is happy to just leave it at that, without trying to label it or date it. Instead, I want to weave stories about roe deer and their magic! 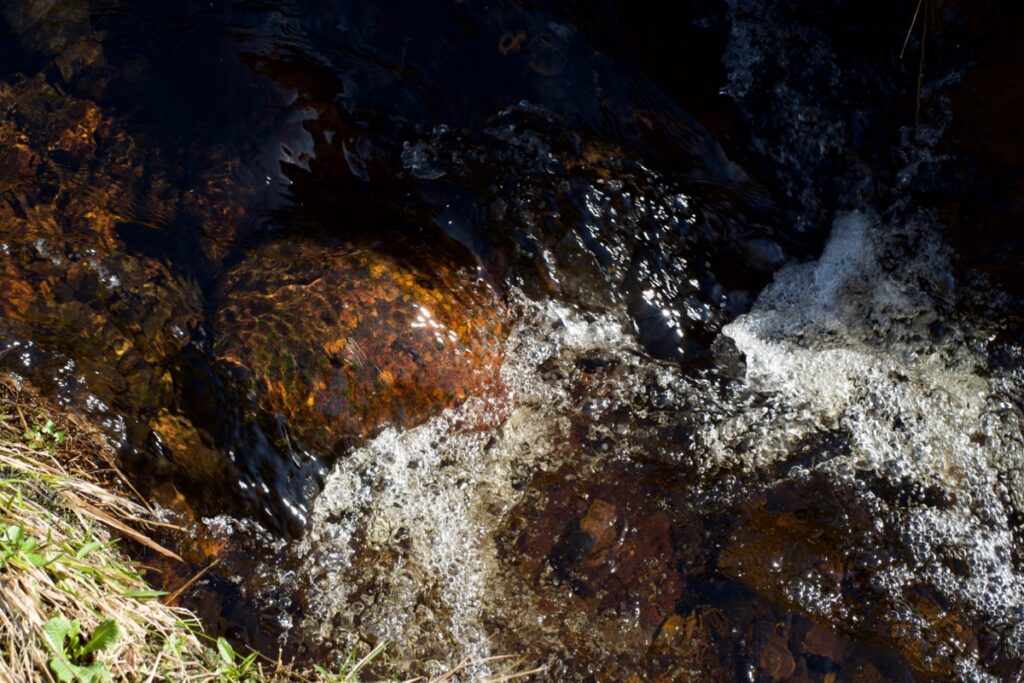 Footnote:  Blarantobair was shown as an unroofed farmstead on the 6” OS map of 1875.