We were driving back from a road-trip to Glen Garry, where we’d been admiring the spectacle of autumn colours: birch, beech and aspen dripping in luminous shades of yellow and gold, and the distant Knoydart hills burnished bronze with bracken and heather. But we didn’t get far down the lonely road to Kinlochhourn before the sky turned an ominous grey and squalls started to rattle the car with sleet. It was almost as if we saw autumn merge into winter that afternoon: Ben Nevis and the surrounding hills were wearing new shawls of white, and the peaks of Glen Coe had a similar sprinkling.

On the outskirts of Fort William we noticed a sign to Inverlochy Castle and turned off on impulse, to see what it looked like. I wasn’t expecting great things, largely because we seemed to be in the middle of an industrial estate. It didn’t feel like the right place for a grand-sounding fortress.

But I’m glad to say I was wrong. Inverlochy Castle rises from a field of lush green grass, onto which big old horse chestnuts and sycamores were shedding their leaves. Far from being overshadowed by industry, it has a commanding presence that strikes you the moment you pass through the gate. Ruinous, yes, but it’s as if the wounds are still raw:  those shattered towers have been patched up and parts of them are supported by scaffolding, but the warning signs suggest that they are still capable of inflicting malicious damage. The whole place reminded me of a gaunt warrior, wounded but grimly defiant. 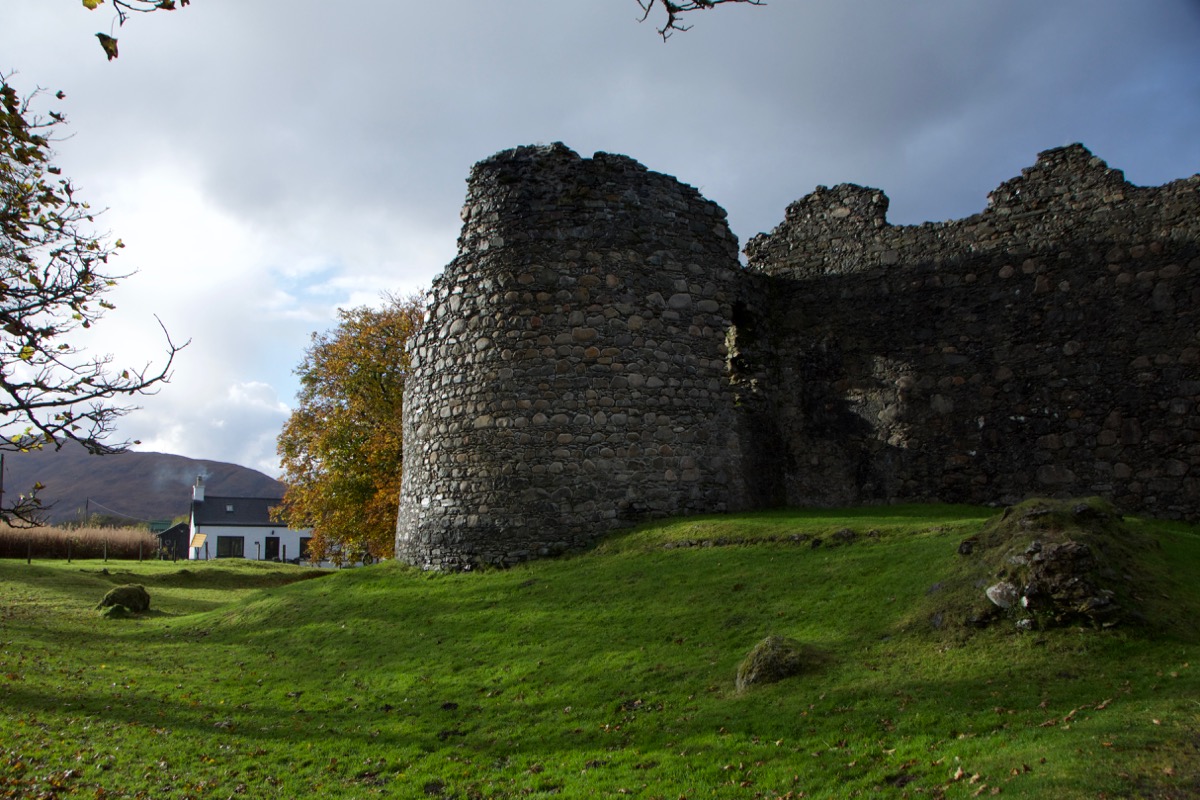 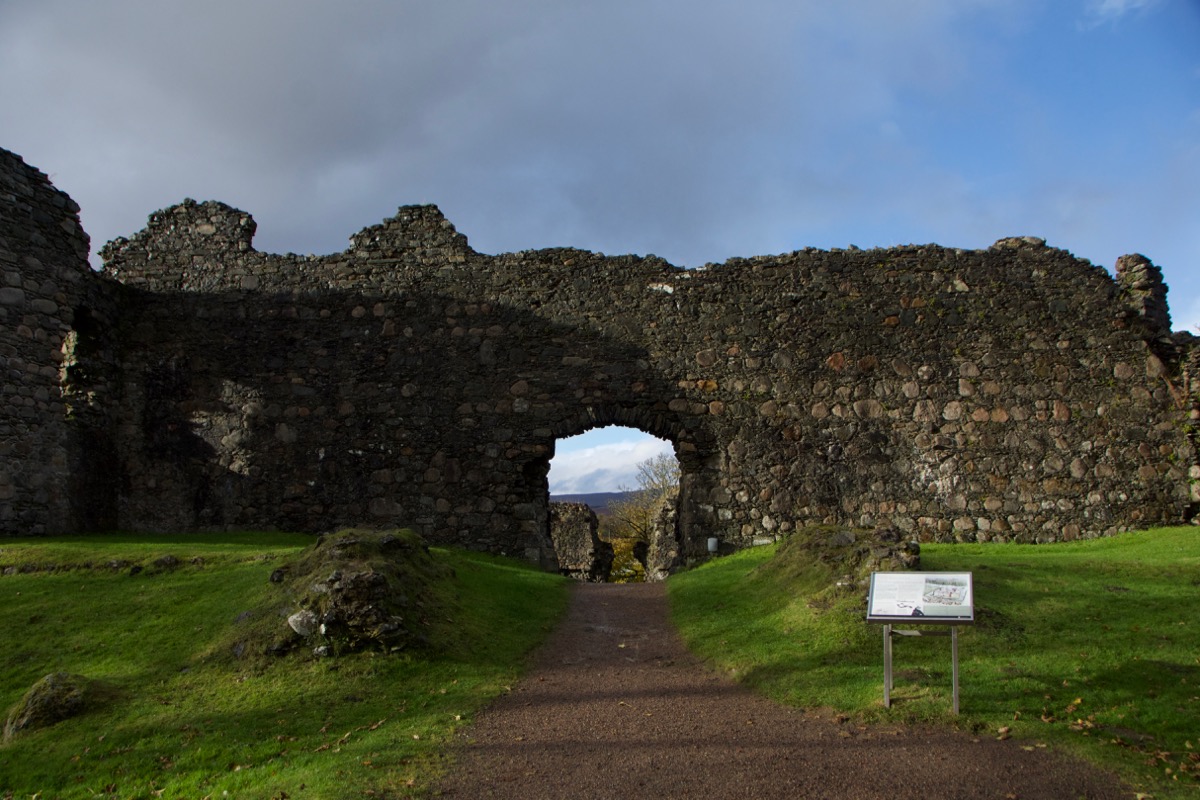 Inverlochy Castle was built around 1280 by John Comyn of Badenoch. I read the name ‘Comyn’ on the information board and immediately thought of Robert the Bruce, because he and one of the Comyns had a bit of a falling-out, to say the least. In the early 1300s, the Comyns were a powerful family and they stood in the way of Bruce’s ambitions for the Scottish throne. One fateful day in February 1306, John ‘the Red’ Comyn was murdered in Greyfriars Church in Dumfries, allegedly by Bruce and his companions.

It turns out that the Comyn who built Inverlochy was not John ‘the Red’ Comyn but his father, John ‘the Black’. A descendant of King Donald III, in the late 13th century John ‘the Black’ was one of the Guardians of Scotland who acted as regents after King Alexander III died unexpectedly and without a recognised heir. When the field of competing claimants to the throne was narrowed down – with the scheming help of Edward I of England – to a choice of two men, namely Robert de Brus, 5th Lord of Annandale, and John Balliol, John Comyn threw his weight behind Balliol, who was his brother-in-law. John Balliol survived a brief and ineffective reign but the feud between the Comyns and the Bruces was handed down from father to son and, in Bruce’s case, to the grandson, who succeeded John Balliol to become King Robert the Bruce. 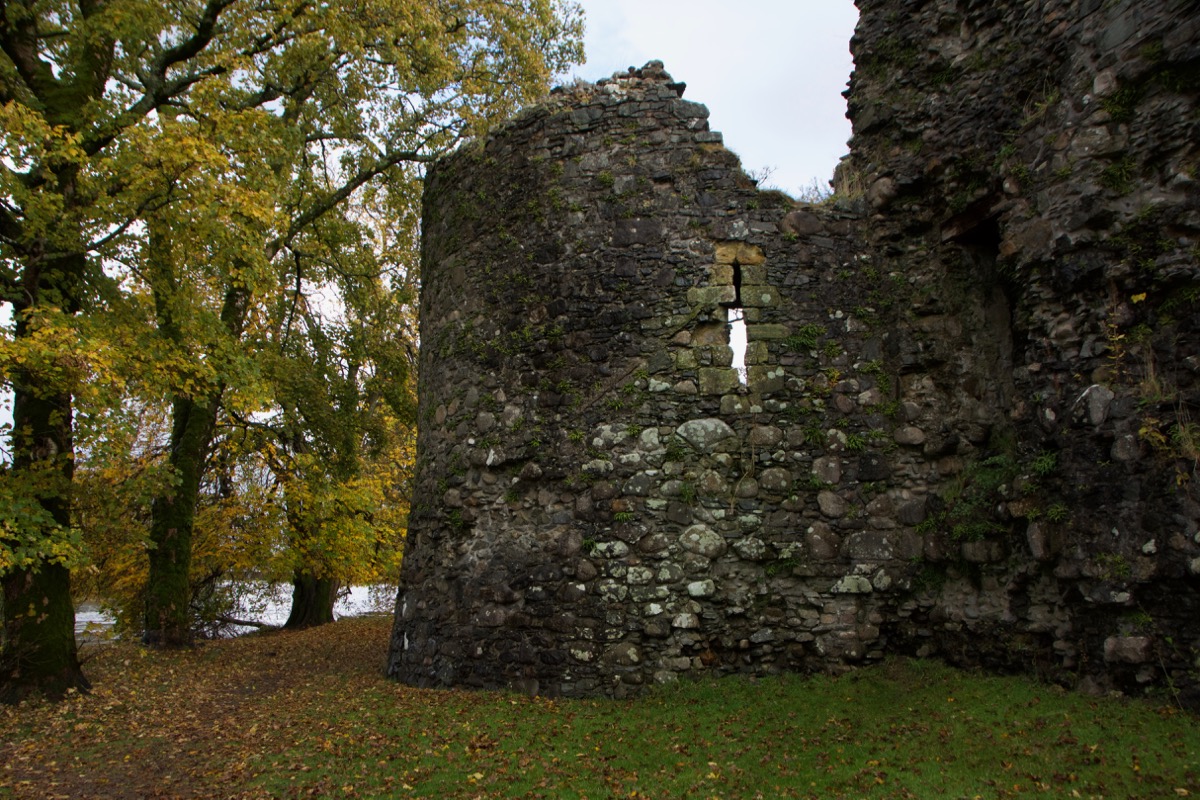 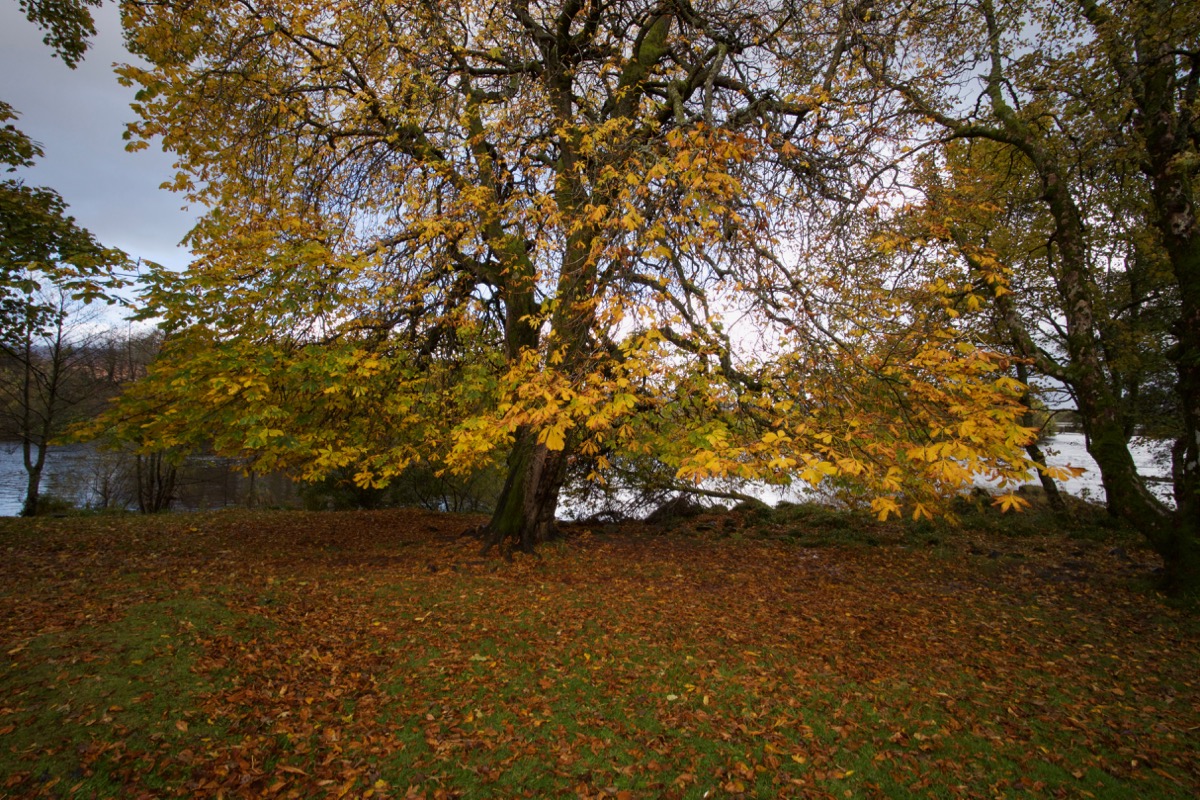 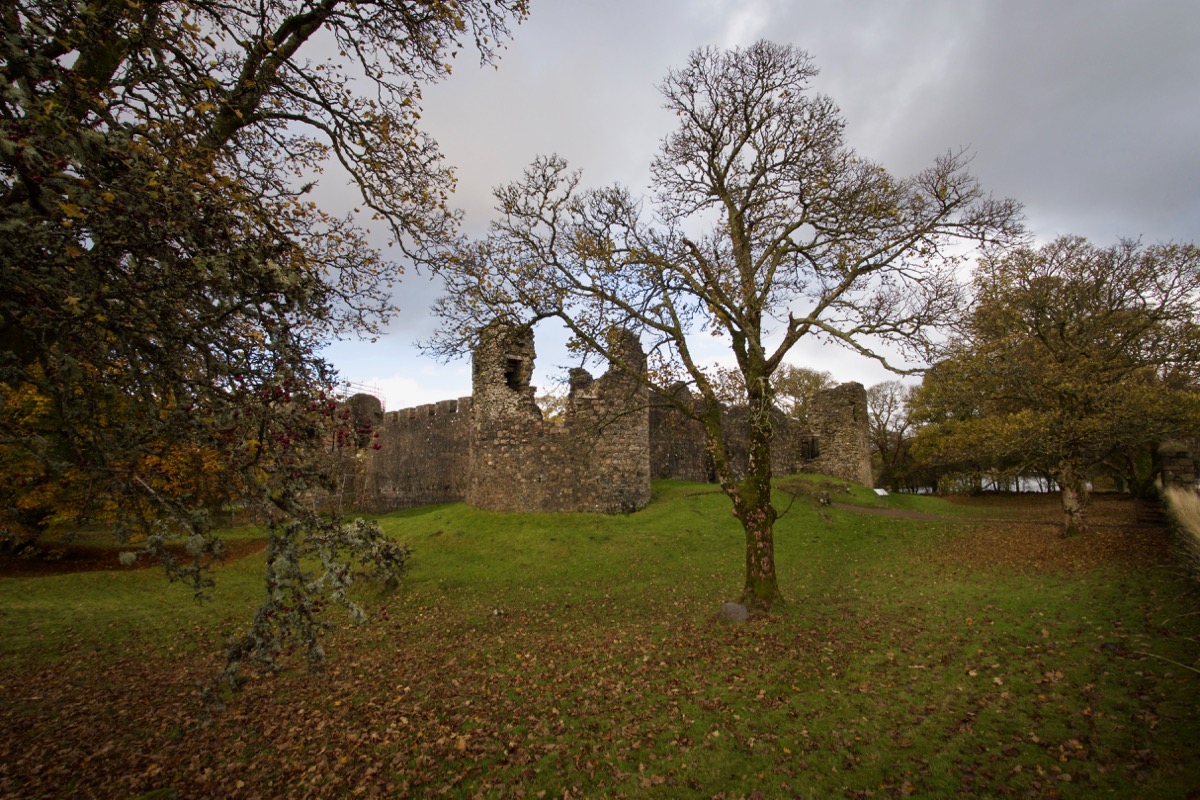 When it was built, Inverlochy Castle stood in a strategic position at the southern entrance to the Great Glen. To the north-east, the long finger of Loch Ness was guarded by Urquhart Castle, which was also held for a time by John ‘the Black’ Comyn, while to the south, Loch Linnhe opens out onto Scotland’s west coast and islands. The River Lochy flows beneath the castle’s north-west wall, providing both a natural defence and a convenient access for boats bringing supplies; originally, the water filled a moat that was dug around the other three sides.

Architecturally, Inverlochy was built to survive everything that medieval armies could throw at it. Walls nearly nine feet thick were angled to resist scaling ladders, and both the main entrance and the ‘water gate’ to the river were protected by a portcullis. Inside was a courtyard that contained kitchens, storehouses and stables.

Six weeks after the murder of John ‘the Red’ Comyn, Robert the Bruce was crowned at Scone, but he had made some bitter enemies and his position was by no means secure. Defeated at the Battle of Methven, he went on the run and spent a winter in hiding;  in February 1307 he reappeared and mounted a daring campaign that swept right across Scotland. Using guerrilla tactics, Bruce captured his opponents’ castles one by one and extinguished support for the Comyns by fire and sword.  Against considerable odds, he achieved his goal.  Over the years that followed, Inverlochy Castle was gradually abandoned. 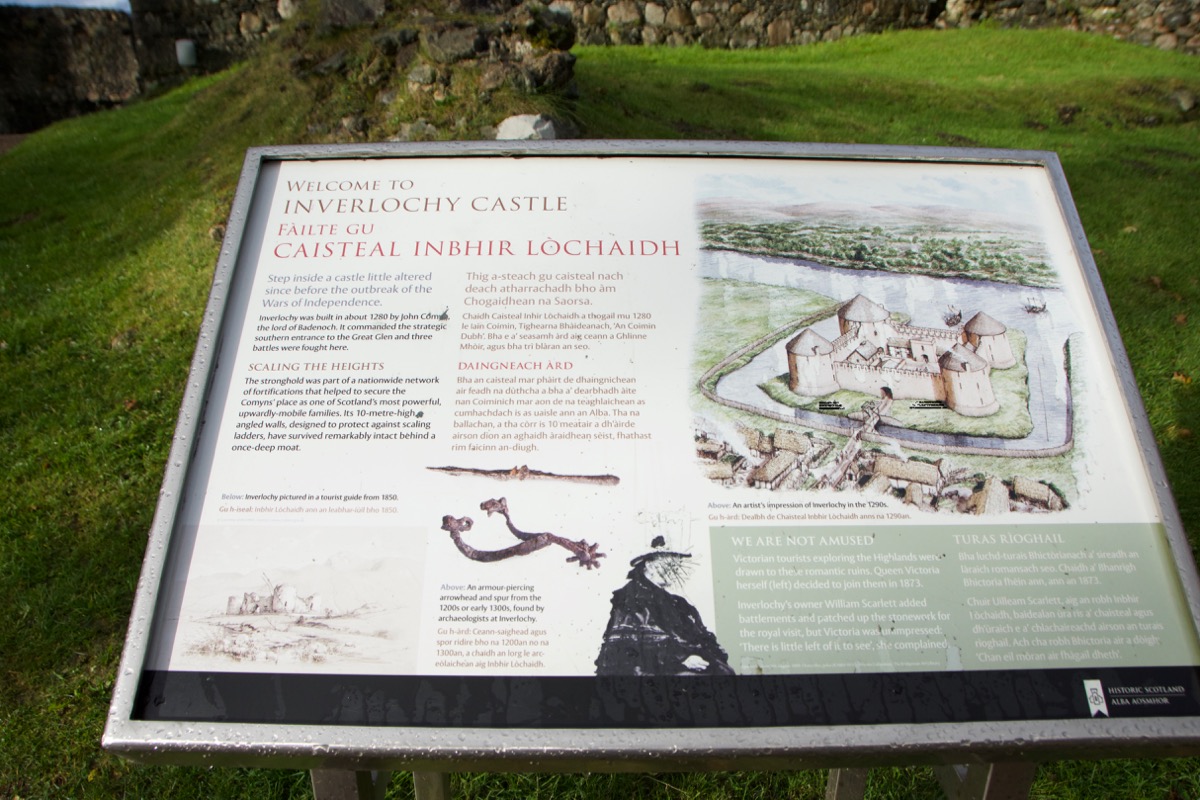 Information board showing what Inverlochy may have looked like in 1280

That might have been the end of Inverlochy’s role in Scottish history, but it had yet to witness two significant battles.

The first took place in 1431, and was sparked when King James I of Scotland imprisoned Alexander of Islay, Lord of the Isles. Vengeful Highlanders led by Alexander’s cousin defeated the King’s forces at Inverlochy, and went on to ravage the lands of Clan Cameron and Clan Chattan, who were loyal to the king.

Then, in February 1645, came a second battle. Since 1603, Scotland and England had been ruled by one monarch, beginning with King James VI and I. Now James’ son, Charles I, was making changes to Scotland’s religious structure, thereby incurring the wrath of a movement known as the Covenanters. This conflict in Scotland was given further impetus by the wider unrest of England’s Civil War.

Encamped around Inverlochy Castle were the Covenanter forces commanded by Archibald Campbell, 1st Marquess of Argyll. In the depths of winter they thought themselves relatively safe from attack by the Royalist army, which was led by James Graham, 1st Marquess of Montrose. But, aided by the formidable talents of Alasdair MacColla, a notoriously ruthless warrior known as ‘Colkitto’, Montrose took his men on a gruelling trek through deep snow. They camped on the slopes of Ben Nevis and next morning Montrose threw the entire weight of his army against Argyll’s men in a surprise attack.

The bard Ian Lom MacDonald is said to have climbed a tree to watch the battle, and later celebrated Montrose’s victory in a long poem entitled Là Inbhir Lòchaidh (‘the Day of Inverlochy’).

I climbed early on Sunday morning
the brae of the Castle of Inverlochy
I saw the army get into order,
and victory on the field was with Clan Donald. 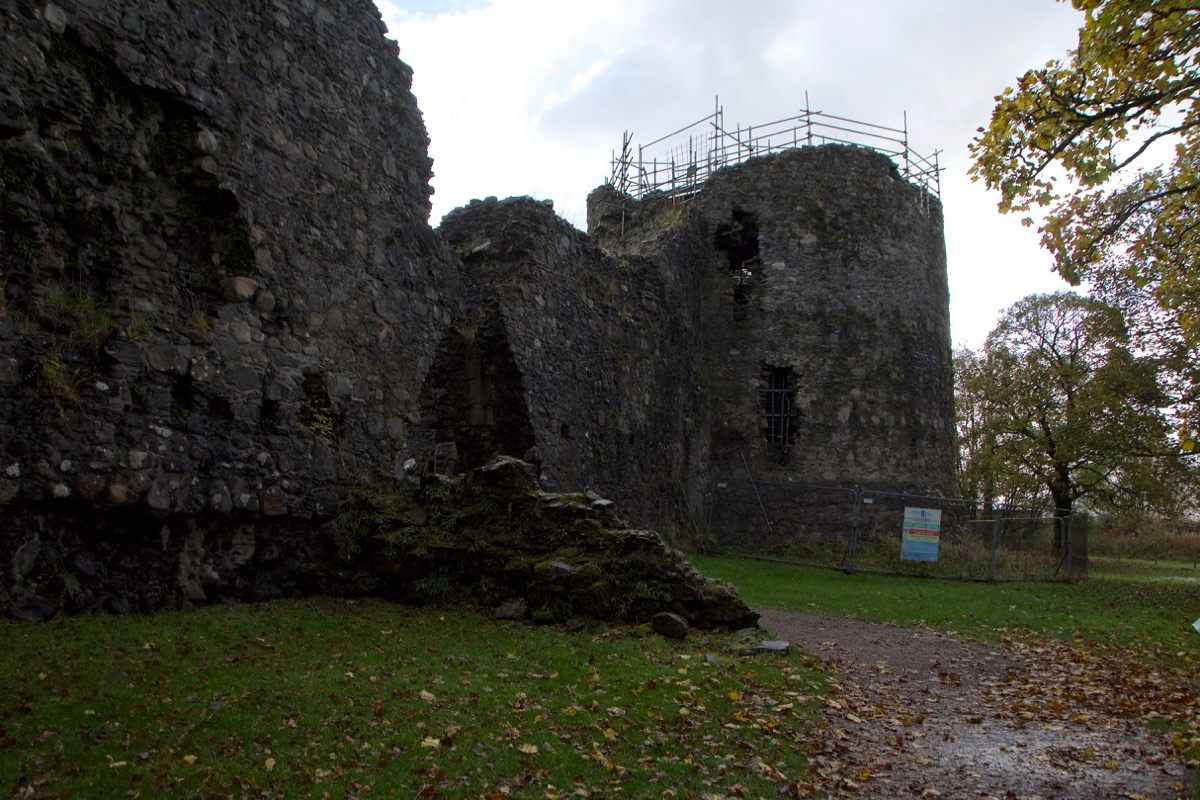 Standing in the courtyard of Inverlochy, you find yourself facing each broken tower in turn with a growing sense of disquiet. You don’t necessarily feel like picnicking on the lawn. If castles bear a grudge, I suspect this one has quite a long memory.