With the rain hammering down outside and both cats snoozing by the fire, it’s a good time to light a few candles and read about the origins of some strange old Christmas customs, such as the gathering and hanging of mistletoe.

Why does mistletoe have such an ancient and mystical appeal? For a start, it grows not in the ground but on a host tree, without the direct nourishment of soil. This ability alone was enough to imbue it with supernatural properties. Some writers have described its appearance at night, with the opalescent berries glowing eerily in the moonlight, high above the observer’s head; and there was something about its shape and form that suggested its suitability as an aphrodisiac or fertility charm. 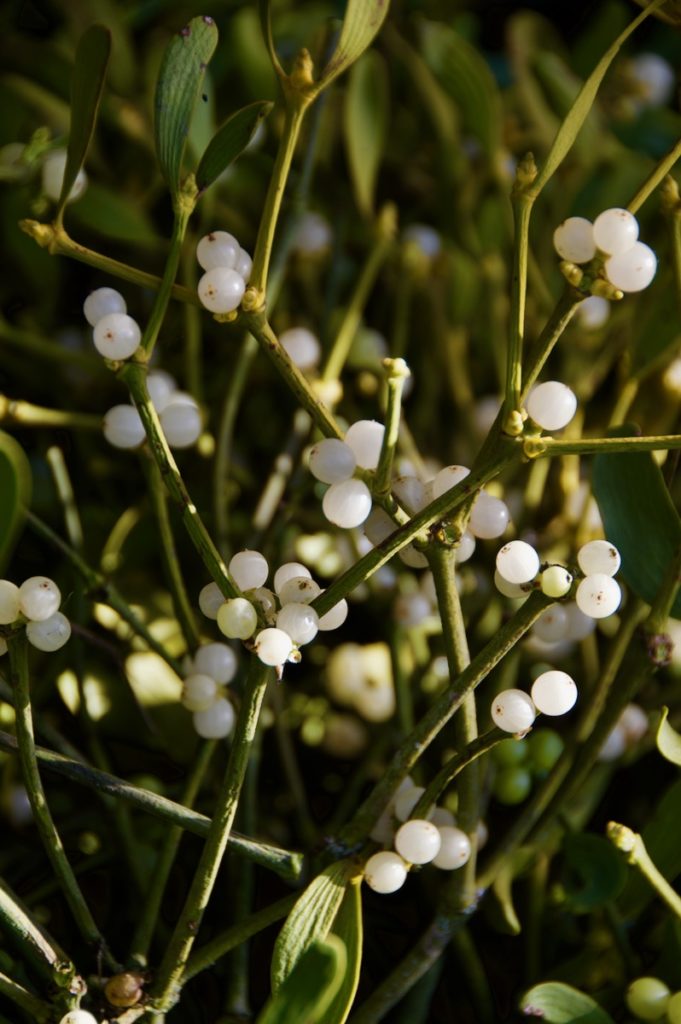 It’s almost impossible to talk about mistletoe without mentioning the druids, and that is largely thanks to Pliny the Elder (AD 23-79), a Roman naturalist and philosopher who described some curious ceremonies that took place in the Gallic provinces:

“The Druids—that is what they call their magicians—hold nothing more sacred than mistletoe and a tree on which it is growing, provided it is a hard-oak*… when it is discovered it is gathered with great ceremony, and particularly on the sixth day of the moon…because it is then rising in strength and not one half of its full size. Hailing the moon in a native word that means ‘healing all things’, they prepare a ritual sacrifice and banquet beneath a tree and bring up two white bulls, whose horns are bound for the first time on this occasion. A priest arrayed in white vestments climbs the tree and with a golden sickle cuts down the mistletoe, which is caught in a white cloak. Then finally they kill the victims, praying to God to render his gift propitious to those on whom he has bestowed it. They believe that mistletoe given in drink will impart fertility to any animal that is barren, and that it is an antidote for all poisons.”  (Pliny, ‘Natural History‘)

The Romans, it has to be said, were appalled and terrified by the druids, and in Britain they didn’t rest until they had wiped them out. The druid groves have long gone, but mistletoe’s magical aura persisted. In the Middle Ages, it was thought that mistletoe could cure all kinds of ailments, including epilepsy and tumours. A woman who wished to conceive a child would tie a sprig of mistletoe to her wrist or her waist. When it grew on a fruit tree, the plant was thought to protect the crop and keep witches at bay; it was also believed to assist in divining treasure. 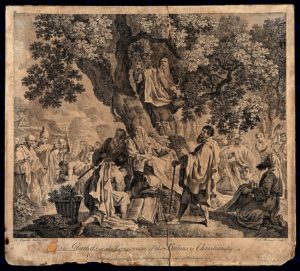 ‘The druids, or the conversion of the Britons to Christianity’ (engraving by S.F. Ravenet, 1752) shows a druid up an oak tree, defiantly harvesting mistletoe, while a contingent of Christian priests wait to interview him

In the early 18th century, the Reverend William Stukeley, an enthusiastic antiquarian, believed so strongly in the plant’s power that he created a Druidic temple in the orchard of his Lincolnshire garden, at the centre of which was an “antient appletree oregrown with sacred mistletoe.” It’s unclear whether Stukeley sallied forth at night clad in white robes and wielding a golden sickle, but he did experiment with ‘inoculating’ or bud-grafting trees with mistletoe, because at that time there was still doubt about exactly how the plant could be propagated.

While mistletoe (Viscum album) is scattered across England and Wales and is present – although uncommon – in Scotland, its true heartland lies in the border counties of Herefordshire, Worcestershire, Gloucestershire and Somerset, where there is also a concentration of apple orchards. It has been speculated that the mild, humid climate of the Severn estuary, combined with the soft bark of suitable host trees, makes this an ideal environment for the plant to thrive.

“In the mid-nineteenth century, Dr H G Bull of the Woolhope Naturalists’ Field Club found that mistletoe grew on no less than 34 per cent of the apple trees in Herefordshire orchards.”

In parts of Herefordshire, some of the most curious and arcane mistletoe-related rituals survived until the early years of the 20th century. A mistletoe bough was traditionally cut and hung up inside the house as the clock struck twelve on New Year’s Eve; the old bough, which had remained in place for the past year, was removed and destroyed in a practice called ‘Burning the Bush’. A globe of twigs, woven from hawthorn and mistletoe, was taken out to the first field that had been sown with wheat and burnt on a straw fire. At Birley Court two globes, one inside the other, were thrown onto the fire, while at Brinsop a single ball of twigs was set alight and a man ran with it across the first twelve ridges of the field. If the flames died before he reached the end, it was considered an ill omen for the coming harvest. Afterwards, there was much cider-drinking and merriment.

“Where mistletoe stays in the house, love also stays.” 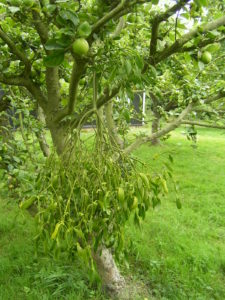 The tradition of decorating halls and doorways with garlands of mistletoe goes back many centuries, and not just in the ‘mistletoe counties’. Leaving it in place for the coming year was widely believed to prevent the house being struck by lightning, to keep witches from the door, and to ensure that the household would have sufficient food. It was also thought to promote an atmosphere of love. Mistletoe was a feminine counterpart to the oak, and kissing beneath it may hold a hazy memory of the time when mistletoe promised fertility; another theory is that mistletoe represented freedom with its unusual habit of growth, thereby promoting an corresponding spirit of freedom from conventional behaviour. Sometimes a berry was removed for each kiss, and sometimes a sprig was carried in the pocket, ready for use at opportune moments.

In Scotland, where the mistletoe is the ancient badge of Clan Hay, the fortunes of the Hays of Perthshire were said to be closely linked with the mistletoe that grew in the oak trees of Errol. Sir James George Frazer, author of ‘The Golden Bough’, revealed that if a Hay cut some mistletoe with a new dirk on All Hallow’s Eve, then encircled the tree three times sunwise and recited a particular spell, the sprig that he’d cut would be a “sure charm against all glamour or witchery, and an infallible guard in the day of battle.” In addition, it could be placed in a cradle to prevent the fairies from stealing a baby.

“It is not a new opinion that the Golden Bough was the mistletoe.”

Frazer noted that the two most unlucky deeds that could be done in the name of Hay were to kill a white falcon and to cut a limb from the oak of Errol. These beliefs were encapsulated in a old verse ascribed to Thomas the Rhymer:

When the mistletoe bats on Errol’s aik,
And that aik stands fast,
The Hays shall flourish, and their good grey hawk
Shall nocht flinch before the blast.

But when the aik decays
And the mistletoe dwines on its withered breast,
The grass shall grow on Errol’s hearthstane
And the corbie* roup in the falcon’s nest. 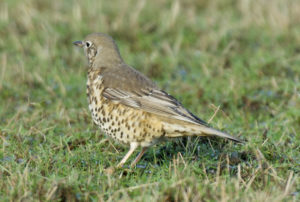 Mistletoe is best described as hemi-parasitic, as it relies on its host tree for water and mineral nutrients, but it is capable of photosynthesising through the chlorophyll its own leaves, which remain on the plant all year round. Mistle thrushes, whose name derives from their appetite for its berries, are just one species that feast on the pearl-like fruits; others include redwings and fieldfares. These thrushes swallow the berries whole, and are therefore not as efficient at spreading the seeds as smaller birds such as the blackcap, which eats the pulp and then wipes the sticky seeds off its beak onto a branch.

Although mistletoe is commonest on cultivated apple trees, it can also be found on lime, hawthorn, poplar, field maple, elm and hazel. It is uncommon on oak trees, although in 1870 the members of the Woolhope Naturalists’ Field Club successfully harvested a bunch of mistletoe from an oak near Aymestrey, while rather wistfully acknowledging the absence of a sacrificial bull or an archdruid equipped with a golden sickle.

So strongly was mistletoe regarded as a symbol of pagan ritual that in many parishes, until fairly recent times, it was considered unsuitable for decorating churches at Christmas. William Stukeley, however, recorded an instance of a sprig of mistletoe being carried to the altar of York Minster on Christmas Eve.

The revised edition of Nicholas Culpeper’s ‘The English Physician’ (published in 1810) recommends that a spring of mistletoe, if hung around the neck, will act as a charm against witchcraft. When mixed with equal parts of rosin (an extract of pine resin) and wax, it “doth mollify the hardness of the spleen, and helpeth old ulcers and sores.” Powdered mistletoe was prescribed as an effective treatment for the ‘falling-sickness’ or epilepsy, while “the fresh wood of any Misselto bruised, and the juice drawn forth and dropped in the ears that have imposthumes in them, doth help and ease them within a few days.”

Mistletoe’s reputation as a cure for epilepsy has at least one story in its favour. Early in the 20th century a gypsy woman who visited a cottage in Nottinghamshire advised the father of a young boy that if he boiled some mistletoe and gave him the water in a wineglass to drink, it would cure his epileptic fits. The father tried the remedy on himself first, to be sure it was safe, and then gave it to his son, who was apparently cured. In Somerset, mistletoe from a hawthorn bush was made into a tea to treat measles. Although not widely available, mistletoe tea is still used as a herbal remedy to soothe the nervous system and lower blood pressure.

Alongside the beneficial properties, however, there was still a strongly-held belief in many places that mistletoe contained poison – and indeed it is poisonous, if taken in excess. Shakespeare knew and alluded to this danger in his play Titus Andronicus, when he had his character, Tamora, Queen of the Goths, describe the features of a “barren detested vale”:

“The trees, though summer, yet forlorn and lean,
O’ercome with moss and baleful mistletoe:
Here never shines the sun; here nothing breeds,
Unless the nightly owl or fatal raven…” 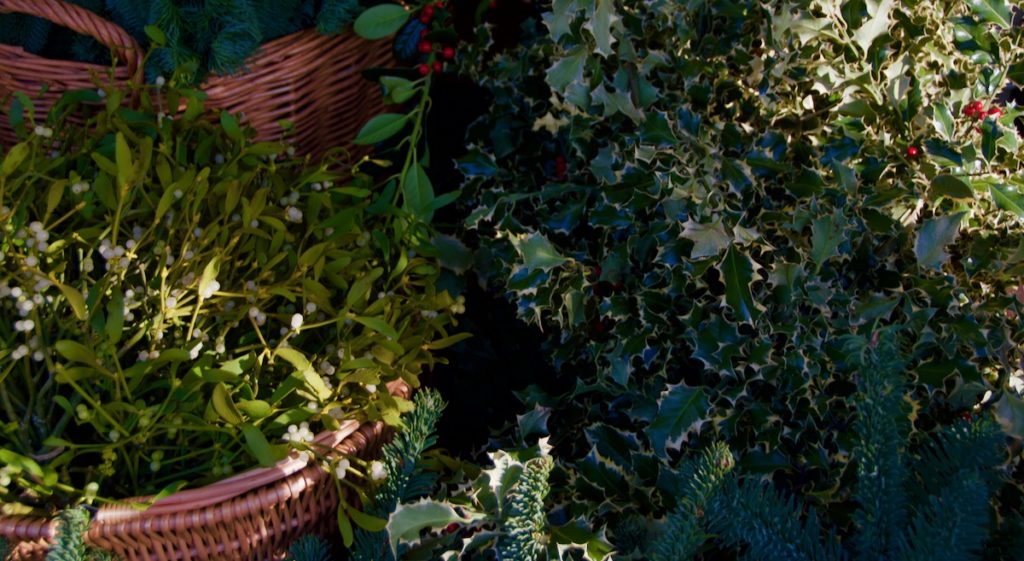