Meadowsweet is everywhere at the moment. Its profusion of cream-coloured, frothy flowers look like stray wisps of sea-foam caught in roadside verges and ditches; coming later than elder flowers, meadowsweet is no less fragrant but a little more gentle, carrying a softer smell that is more in keeping with the end of summer. Its hedgerow companions are rosebay willowherb, whose tall spikes are past their best, like slow-burning fireworks with only the topmost flowers still glowing vibrant pink; and the amber-tinted leaves of brambles, already feeling the breath of autumn in the north-west wind.

“The leaves and floures farre excell all other strowing herbes, for to deck up houses, to straw in chambers, halls, and banqueting houses in the Summer time, for the smell thereof makes the heart merrie, delighteth the senses; neither doth it cause head-ache, or lothsomeness to meat, as some other sweet smelling herbes do.”

As a ‘strowing herb’, Queen Elizabeth I is reputed to have favoured meadowsweet above all other.

The name comes from the Anglo-Saxon ‘meodu-swete’, meaning ‘mead sweetener’, because it has been used to flavour mead, beer and wine since ancient times. Among its many other names are ‘queen of the meadow’ and ‘bridewort’, because it was strewn along a bride’s path at handfasting ceremonies. An old Yorkshire name for it is ‘courtship and matrimony’, referring to the honeyed aroma of the flowers (representing courtship) and the more bitter scent of the crushed leaves (a cynical metaphor for marriage!) 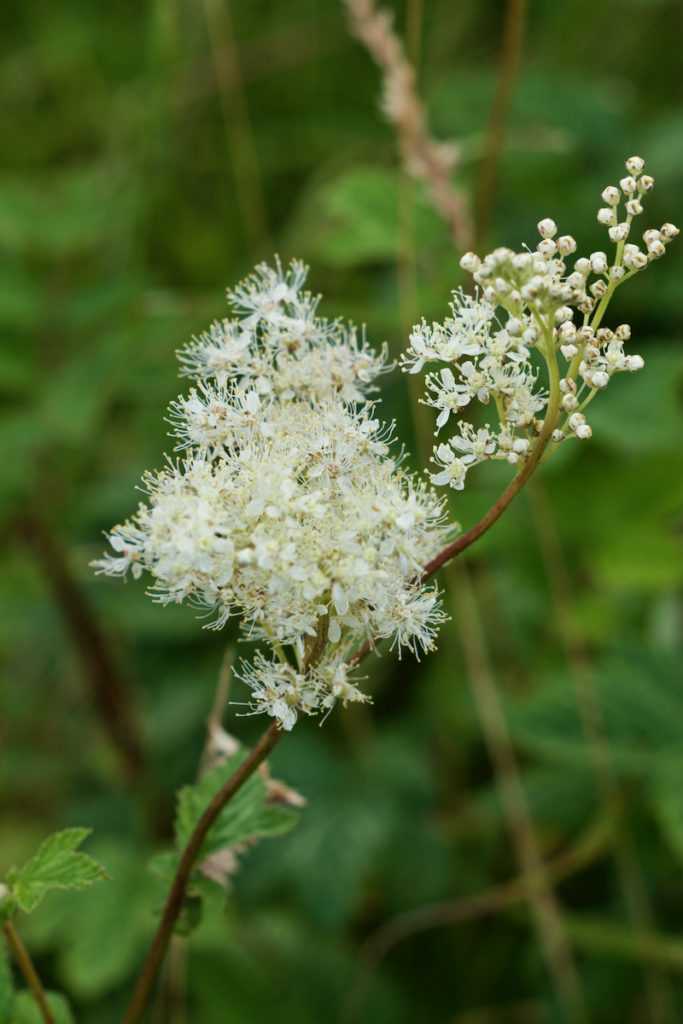 The plant’s old Gaelic name of Crios Cú Chulainn or Cú Chulainn’s Belt is derived from the eponymous warrior-hero of Irish legend, who features in many of the stories in the Ulster Cycle. In battle, Cú Chulainn could invoke a frenzied rage or ríastrad, and he wielded a fearsome barbed spear known as the Gáe Bulg. Not surprisingly, he gained many victories, but afterwards he had ongoing issues with anger management, which could only be addressed by bathing in meadowsweet; as a precaution, he later carried a sprig of the herb in his belt.

Irish legend also reveals that it was Áine, a goddess of Munster, who gave meadowsweet its fragrance. A protector of women, animals and the environment, Áine is connected with midsummer, and is believed to help banish magic spells that are ruled by the sun. Meanwhile, in the Mabinogion, a collection of ancient stories preserved in medieval Welsh manuscripts, the magicians Math and Gwydion used the flowers of meadowsweet, broom and oak to create Blodeuwedd, a beautiful woman whose name literally means ‘flower face’. Blodeuwedd becomes the wife of the hero Lleu Llaw Gyffes, but her fate is eventually to be turned into an owl, distrusted and shunned by all other birds. 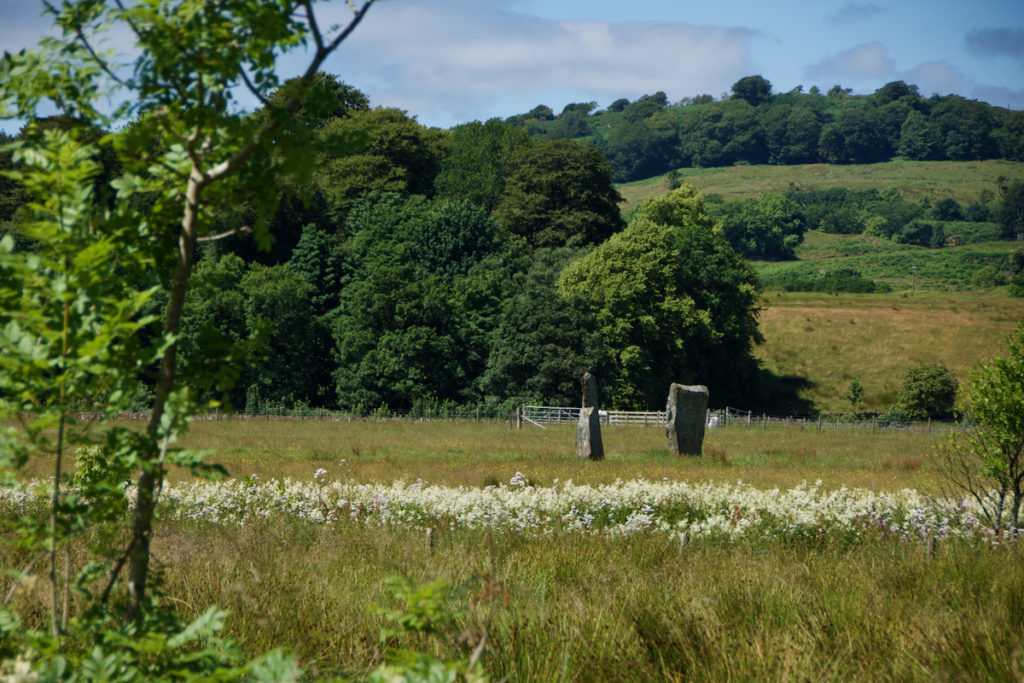 Meadowsweet at the Nether Largie stones, Kilmartin Glen (above), and (below) in Kilmichael Glen 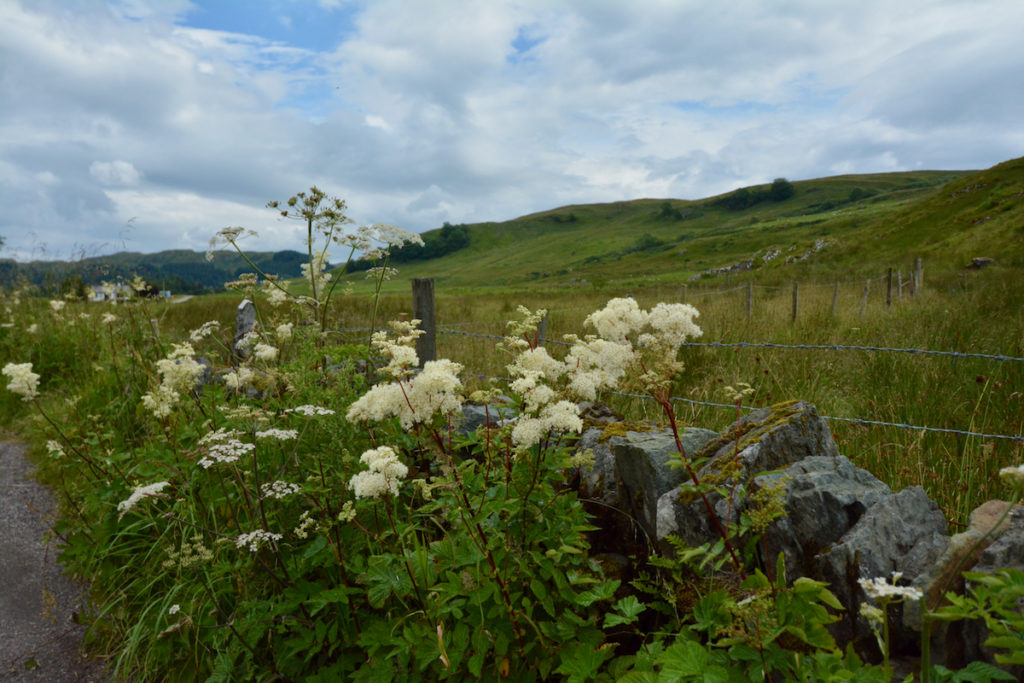 In parts of Wales, at least until the early 20th century, meadowsweet was still regarded with a certain amount of suspicion:

“There is an old story to the effect that if a person falls asleep in a room where many of these flowers are placed, death is inevitable… It is considered quite dangerous for anybody to fall asleep in a field where it is to be found in abundance.”   ‘Folk-Lore and Folk-Stories of Wales’ by Marie Trevelyan, 1909

Meadowsweet blooms from June through to September. John Gerard notes that it “…groweth in the brinkes of waterie ditches and rivers sides, and also in medowes: it liketh watery and moist places, and groweth almost everywhere.” He lists its diverse properties as a medicinal herb, revealing that the flowers steeped in wine would cure the fits of a “quartaine ague” and ”make the heart merrie”, while the “distilled water of the floures dropped into the eies, taketh away the burning and itching thereof, and cleareth the sight.” The roots, boiled or made into powder, would ease all manner of ‘fluxes’, for example diarrhoea.

Perhaps there was a kernel of truth in these old remedies, as meadowsweet is sometimes recommended by herbalists as a tonic for digestive disorders. It also contains salicyclic acid, a component of aspirin, which is an effective painkiller. Needless to say, none of the above remedies should be tried without professional medical advice!

It was once believed that meadowsweet, if gathered at midsummer, would reveal the identity (or at least the gender) of a thief. Simply place a sprig of it in some water, and if it sinks, the culprit was a man, while if it floats, it was a woman.   Writing in ‘Wild Flowers: A Treasury of Traditions, Superstitions, Remedies and Literature’, Rosamond Richardson notes that meadowsweet was one of the sacred herbs of the druids, and adds that “in folklore, the sweet scent has the power to grant second sight and an ability to converse with the fairies.” 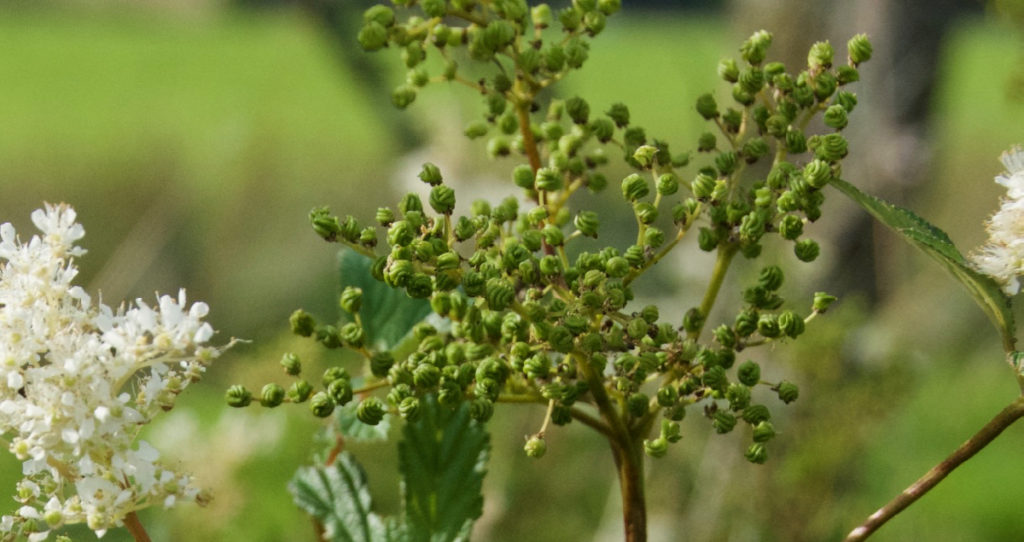 The seeds of meadowsweet are a delight in themselves, forming tight little whorls of bright green

For our distant ancestors, meadowsweet must have held a special significance. Traces of the herb have been found in a Neolithic burial in Perthshire, and in a Bronze Age cairn in west Wales it was discovered along with the cremated remains of three people. I love the fact that it grows in abundance around the stones of Kilmartin Glen. It’s strange to say, but while we were walking along a lane just recently, on our way to visit another chambered cairn (I know, it’s an obsession), I was admiring some meadowsweet and thinking I would write a blog post about it. Then, a few minutes later, when we arrived at the cairn – which was Rí Cruin – I was surprised to see that the information board had an illustration of a burial, showing a bunch of meadowsweet placed next to the body. 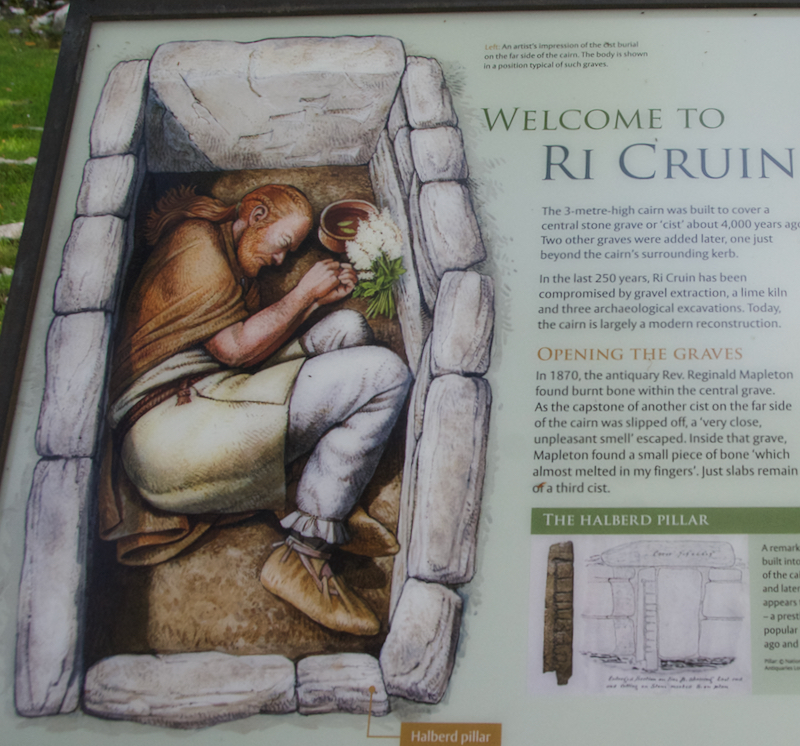 So in one of my next posts, I’ll tell you a little more about Rí Cruin…