Last November, as the daylight was beginning to fade on a drizzly afternoon, Colin and I were trudging across a boggy field on the south coast of Ardnamurchan.

We were not far from the most westerly point in the British mainland, the windswept Point of Ardnamurchan which is marked by one of the Stevenson lighthouses;  but on the peaty slopes above Ormsaigmore the focus of our attention was something a little less conspicuous – and a lot older. 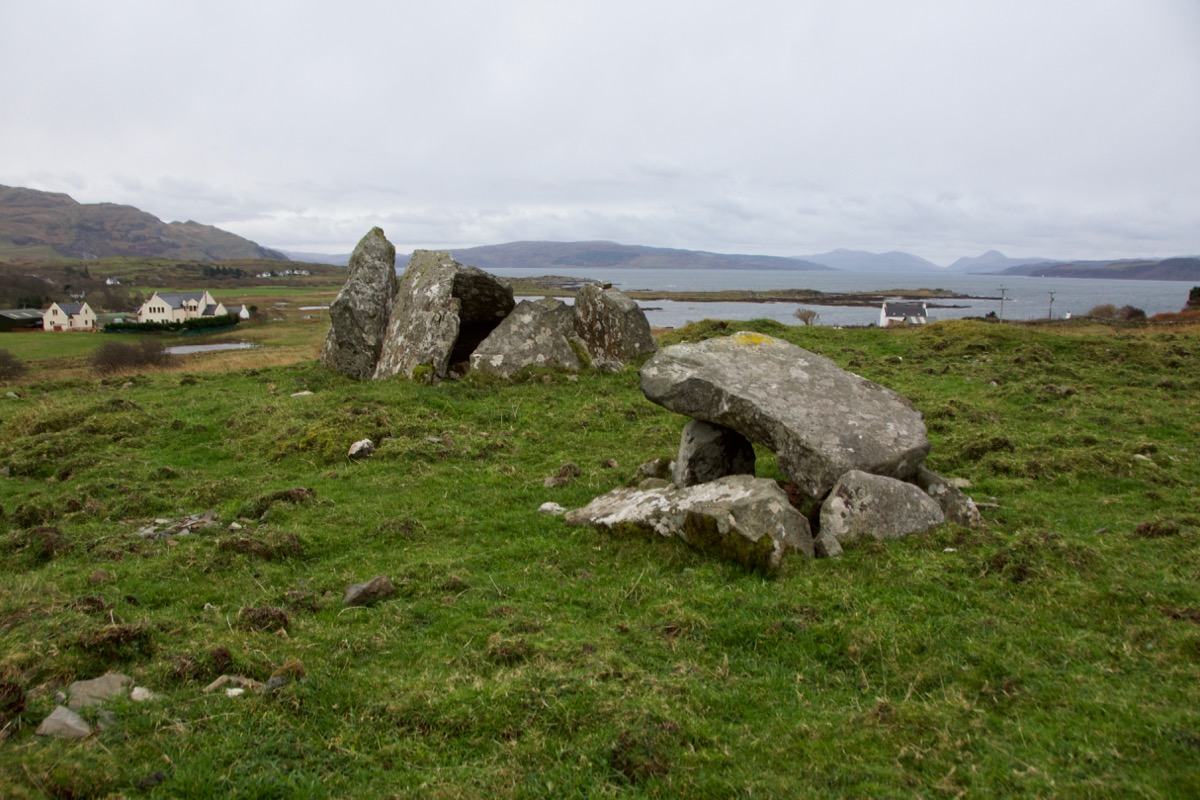 Greadal Fhinn is a Neolithic chambered cairn, and you can glimpse it from the road that winds its way from Kilchoan across to the dazzling white sands of Sanna Bay. From a distance it looks to be nothing more than a pile of stones, but on closer inspection its two distinct burial chambers can still be seen. One is a simple cist-like construction – essentially a stone-built box – while the other is a larger and more impressive passage grave.   Both these structures were once fully covered by a wide circular mound of material consisting of stones and earth; over the millennia this has been scattered and lost, or plundered for building dry stone walls.

Of the passage grave, seven upright stones still stand, and leaning across them is a flat slab, which is likely to have been a capstone.  The smaller cist has also partly collapsed, but you can still get some idea of the construction. 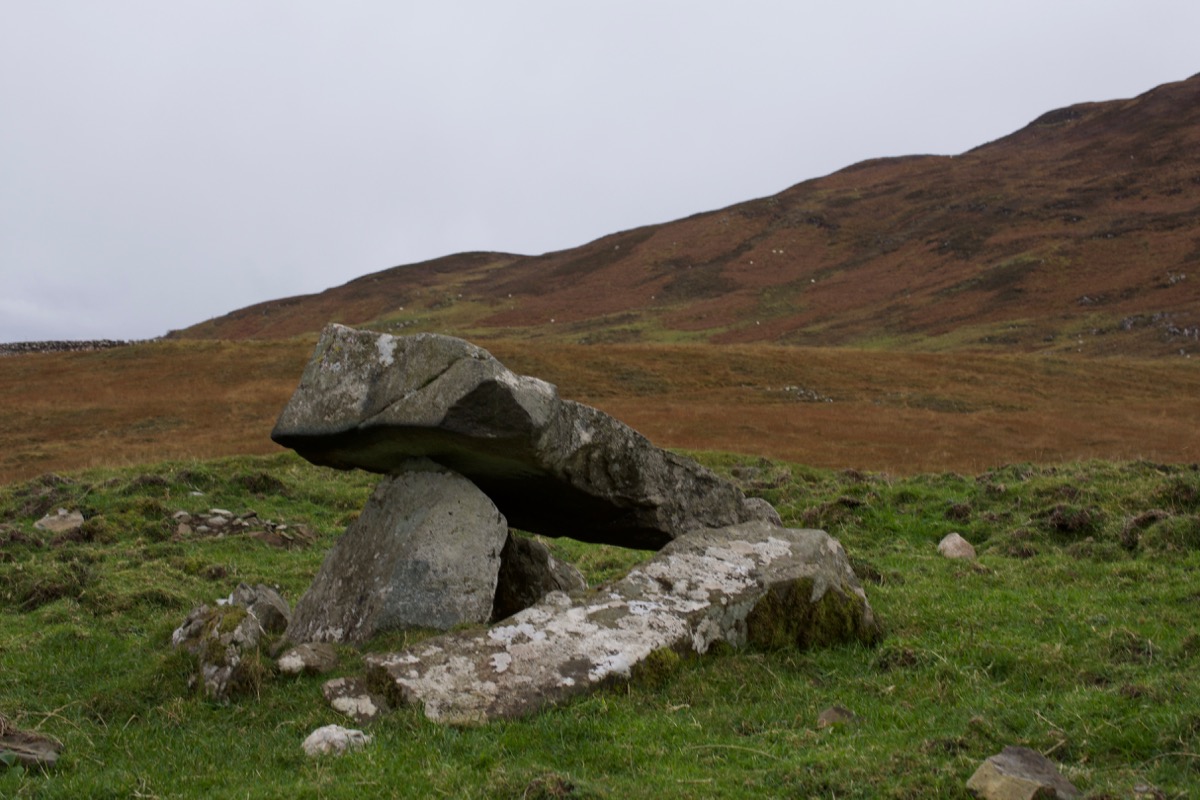 The smaller cist (above) was fairly central to the mound, while the passage grave (below) was located off-centre, towards the south-east rim 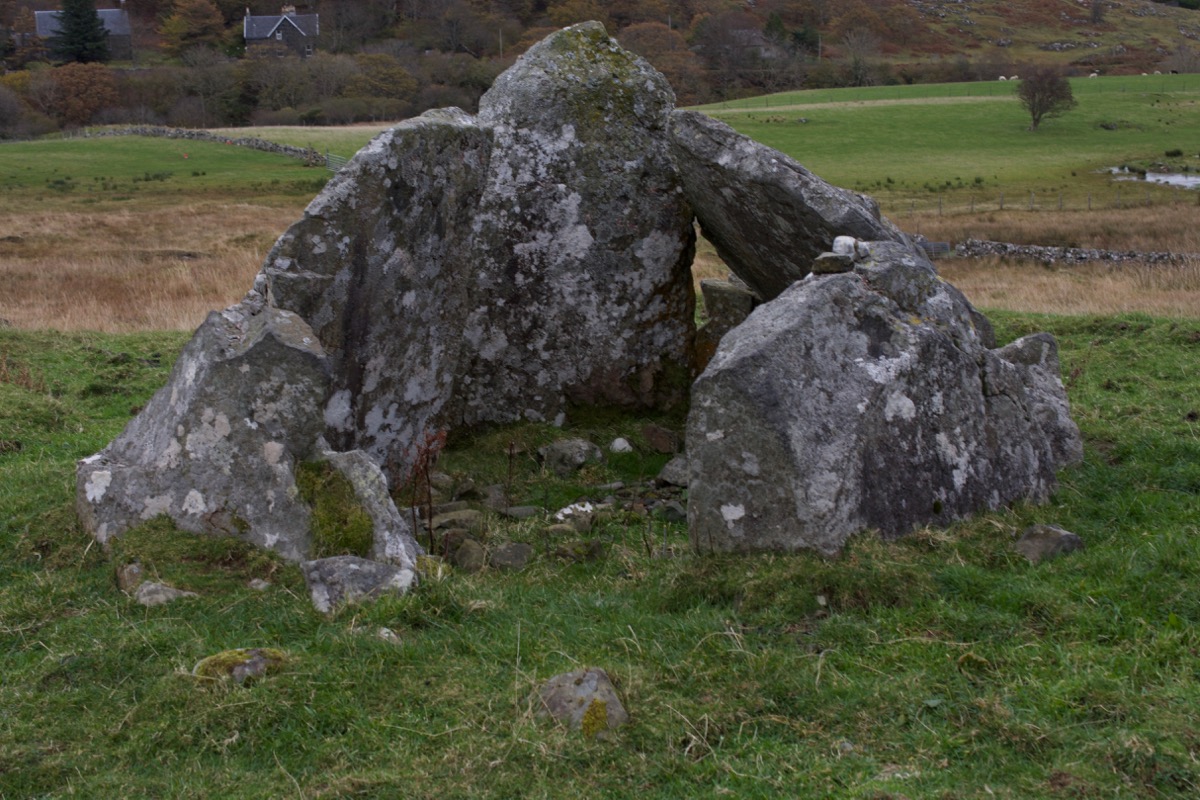 The site is wide open and exposed to the fiercest winds that scour the landscape of Ardnamurchan, reducing even the toughest trees to gaunt, wizened specimens that look old before their time. There are no trees at all in the immediate vicinity of the cairn, except for a a single elder tree that had shed a couple of branches and was bent almost double, as if hurrying away from some invisible pursuer.

Searching for old accounts of the place, I came across a paper submitted by a Mr Symington Grieve to the Edinburgh Field Naturalists’ and Microscopical Society following his visit in 1909. I love finding old reports like this, because often they contain local lore that has since been lost, and sometimes they preserve details about physical features of the site that no longer exist. Mr Grieve made a detailed survey of the site; interestingly, he calls it a ‘circle’, because he found evidence that suggested the presence, in the not too distant past, of large monoliths placed around the rim of the mound:

“There are at least thirteen cavities or depressions more or less circular in form in what may be called the wall or rim of the circle, possibly marking the positions occupied by large monoliths… or smaller stones that were placed on end. I was told that, until comparatively recent times, one or two of these upright stones were in position, and although several persons confirmed this, I was unable to come across any person who could say he had actually seen the standing-stones in position in the rim of the circle.”   Transactions of the Edinburgh Field Naturalists’ and Microscopical Society, Vol. VI, Part IV,1910-1911

On speaking to the local postmaster, Dougal Macdonald Mr Grieve learned that the site was called ‘Greidell Ine or Een’; Mr Macdonald assured him that the last part of the name was the name of an individual, and that he “had heard his grandfather say so.” 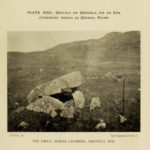 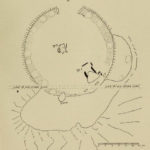 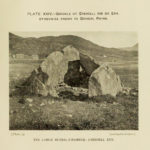 Above:  Symington Grieve’s photographs and plan of the site at Greadal Fhinn

Mr Grieve speculates about the identity of ‘Ine’ or ‘Een’, saying that “so many places are associated with the name of Finn MacCumhaill that it is quite possible that Finn and Ine, or in Irish, Een, may be variations of the same name.” Fionn or Finn MacCumhaill was a great hero of Irish legend, leader of the warrior band known as the Fianna; as a boy, he had tasted the flesh of salmon that had feasted on hazelnuts in the Well of Wisdom, and thereby acquired a powerful magical knowledge. Many sites throughout Ireland and Scotland are connected with him, and so it was natural to link this lonely cairn with his story.

There is another Finn or Fin, however, who is an equally likely candidate. A man known as Caittil Find (or Caithil Fin), a 9th century Norse-Gael leader, is recorded in the Annals of Ulster; some historians believe that this Caittil Find is the same person as a Norseman known as Ketil Flatnefr (‘Flatnose’) who is known to have lived in the 9th century and may have held control of the old kingdom of Dál Riata in western Scotland.

“By the Hebrideans, Ketil was called Caittil Fin, and it is known that he died somewhere in the west of Scotland. It has been suggested that his burial-place is the stone circle, Greadeal Fhinn (Fingal’s Griddle), situated at Ormsaigmore, and still in a good state of preservation.” Ardnamurchan Place-Names by Angus Henderson, from The Celtic Review Vol. 10, No.38, June 1915

So the story persists that Greadal Fhinn is the burial site of Ketil Flatnose.   It has to be remembered that the grave dates from the Neolithic period, meaning that it was built several thousand years before the rise of the Vikings.  But there is nothing to say that an eminent Norse warrior was not buried there, in a tomb that was already ancient, as a mark of honour.

No Neolithic artefacts or remains have been recorded in the graves, but Heritage Ardnamurchan’s website says: “From evidence from other burials, such as the similar cairn at Swordle [on the north coast], they would both have contained the human remains from several individuals as well as objects which were part of the burial ritual.”   It is interesting to see that at Swordle, a complete Viking boat burial was discovered in 2011.

One of Ketil’s offspring was a daughter named Auður djúpúðga Ketilsdóttir, or Aud the Deep-minded. Aud was married to Olaf the White, a son of the King of Dublin. Olaf died in battle, and it is said that Aud was living in northern Scotland when she heard that her son, Thorstein, had also been killed. On hearing of his death, Aud commissioned a knarr – a type of ship used for long sea voyages – to be built in secret, and in it she sailed to Orkney and then to Iceland. One source claims that she commanded up to 30 men on board the ship, including prisoners whom she set free in Iceland, allowing them to settle and become farmers. Aud is one of the matriarchs celebrated in the Icelandic sagas, and many place-names in the west of Iceland preserve her memory. 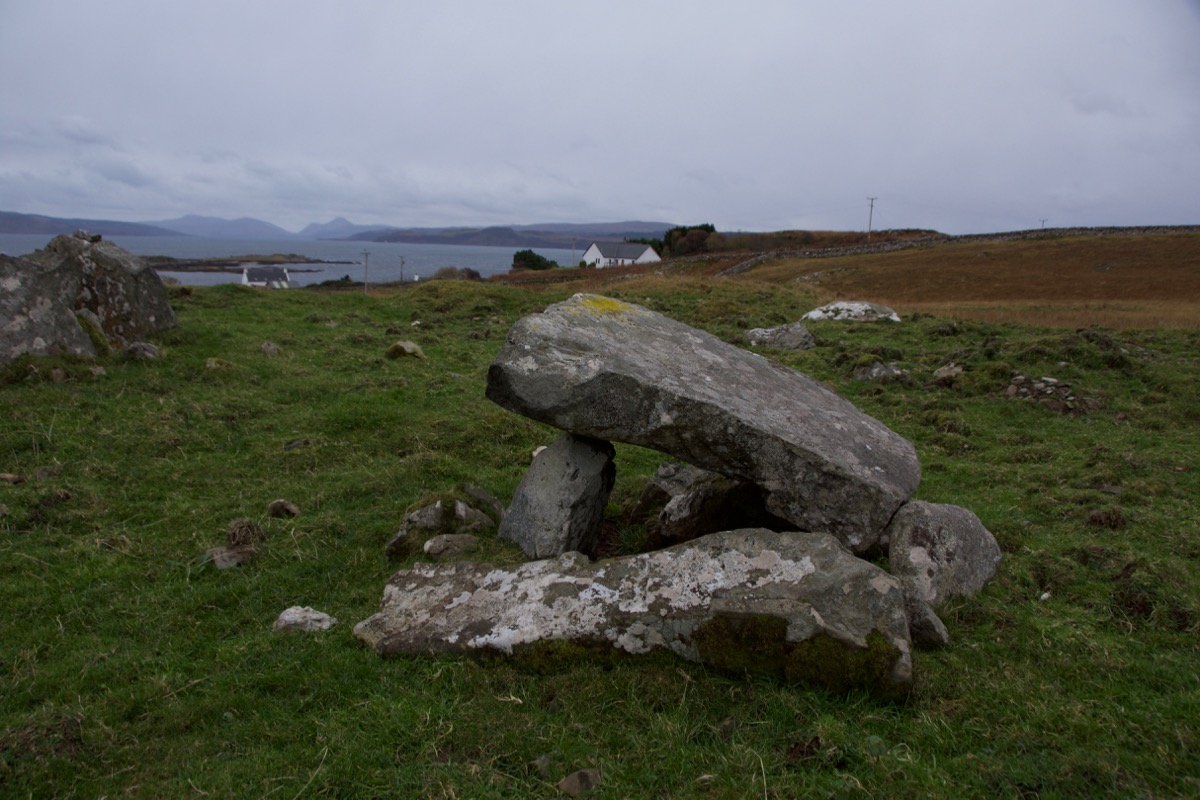 Coming back to Mr Grieve’s report on the chambered cairn…. After dealing with the dimensions and layout of the site, he goes on to discuss the old Irish terms for the separate features of burial chambers. The small stone cist, for example, seems to have consisted of an outer chamber made of large stones, erected over an inner derc, or cavity; the entire structure was known as a fert.

“A burial-mound, with a chamber, built over a derc, seems… to have been called in Ireland a fert, and these structures appear to have been constructed with a varying number of doors, according to the kind of burial for which they were to be used.”

Mr Grieve then quotes a passage from the Book of Lecan, a medieval Irish manuscript:

“A Fert of one door for a man of science,
A Fert of two doors upon a woman,
A Fert without doors, without Trennai,
For boys and for maidens.

A token of pillar stones (Cairti) upon widowers,
To keep their burial-place of the dead.
Cnocs (mounds) upon distinguished foreigners,
And Murs upon those who died of great plagues.”

Grieve’s footnotes to the above:
Trennai—The three days devoted to the Guba, or funeral rites of deceased persons of distinction. —(Prof. Sullivan’s introduction to O’Curry vol. i. p.cccxxxi and p. dcxli.)
Cairte—A pillar stone, as Cairte Faithaig, i.e., the pillar stone of Fathach, the poet of the Firbolgs.—(‘Tale of the First Battle of Magh Tuired’). Cairti mark the graves of widows (widowers) to maintain their appropriate part of the cemetery. Such a monument is called an Aisneis de Cairtib, i.e., a testimony by pillar stones.—(‘Dinsenchas of the Fair of Tailte’.)
Murs—These monuments are described as ‘ramparts upon such as die of great plagues.’—(‘Dinsenchas of the Fair of Tailte.’). Mur, a wall, a sepulchral monument, a plague grave—(O’Curry, vol. iii, p.590.)

Mr Grieve adds that, in Ireland, fairs were often held every year on the site of these great burials, sometimes at the request of the deceased, in order to keep their name alive through future generations. 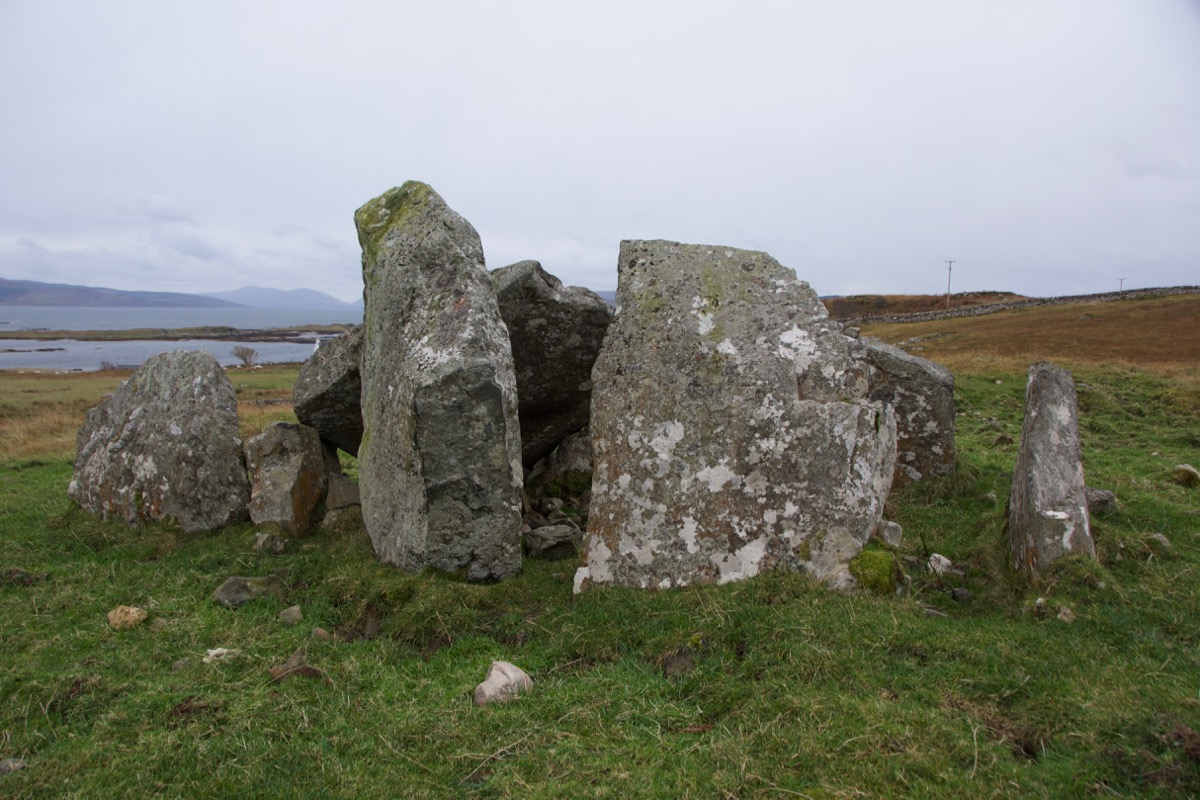 Today, the passage grave of Greadal Fhinn gives an overwhelming impression of desolation and emptiness. It is obviously used as a convenient shelter for sheep and other animals, and they certainly need it, because there is little cover here from the wind and rain that sweep in from the Atlantic. Ketil Flatnose and his contemporaries are long gone; perhaps they are celebrating in the much more hospitable environment of Valhalla. I hope that Aud the Deep-minded has a place there too.