It was one of those mornings when, as if by some magic hand, all the spiders’ webs were garlanded with tiny droplets, and the fronds of bracken, already burnished gold, had been kissed by the gentlest breath of dew.

It was impossible to walk without destroying the spiders’ delicate architecture, so we trod as carefully as we could, watching as the rising sun set fire to the jewels. Shreds of mist clung to the hills; the air was gentle and moist, fragrant with earthy smells. I remembered again just how much I love autumn. 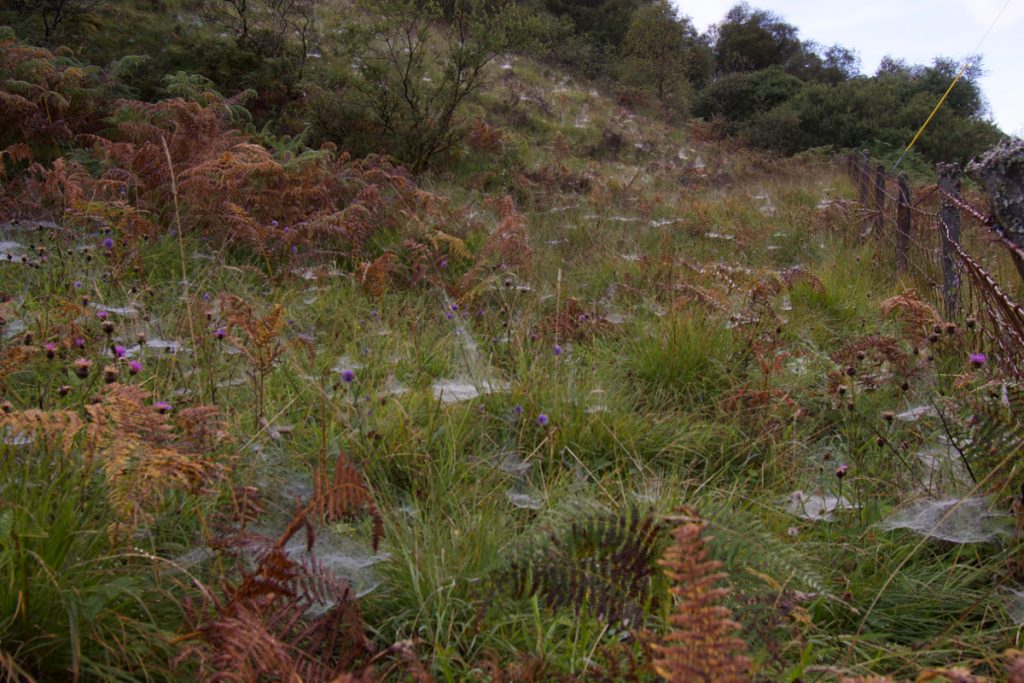 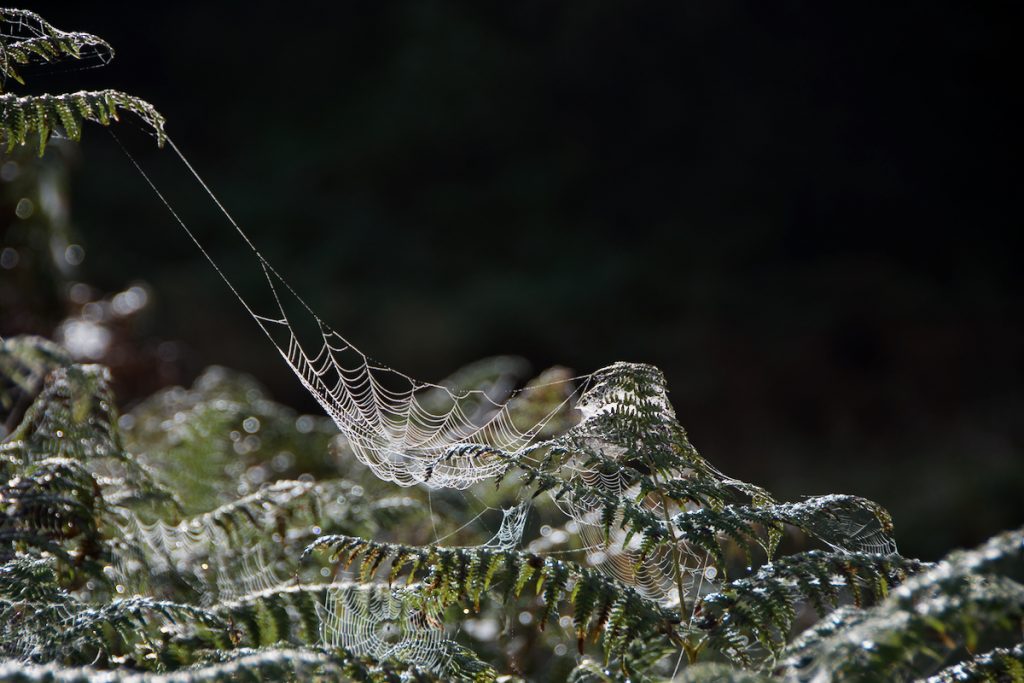 It seemed like a perfect day for exploring Ballachuan hazel wood. We’ve been there in spring and early summer, when the ground beneath the low-growing trees was carpeted with bluebells; but never at this time of year, when the leaves are just turning and the fungi are at their finest and weirdest.

It is believed that Ballachuan has been in existence since the end of the last Ice Age; not the exact same trees, of course, but successive generations of them, cloaking this softly sloping hillside in a rich, low-growing canopy that must have drawn the first settlers here to collect an annual bounty of nuts and fruit. It is one of Scotland’s finest examples of an Atlantic hazel wood, defined by the presence of rare species of lichen and fungi. We were quite keen to find one of these – the strange-looking hazel gloves fungus, which appears as brownish-orange ‘fingers’ wrapped around a branch. 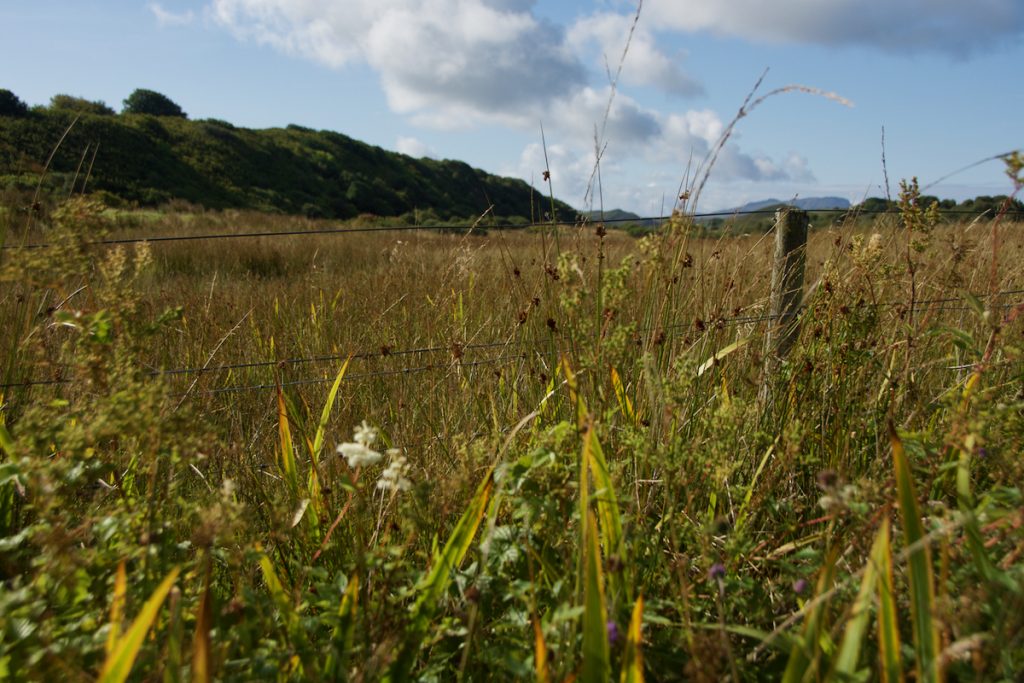 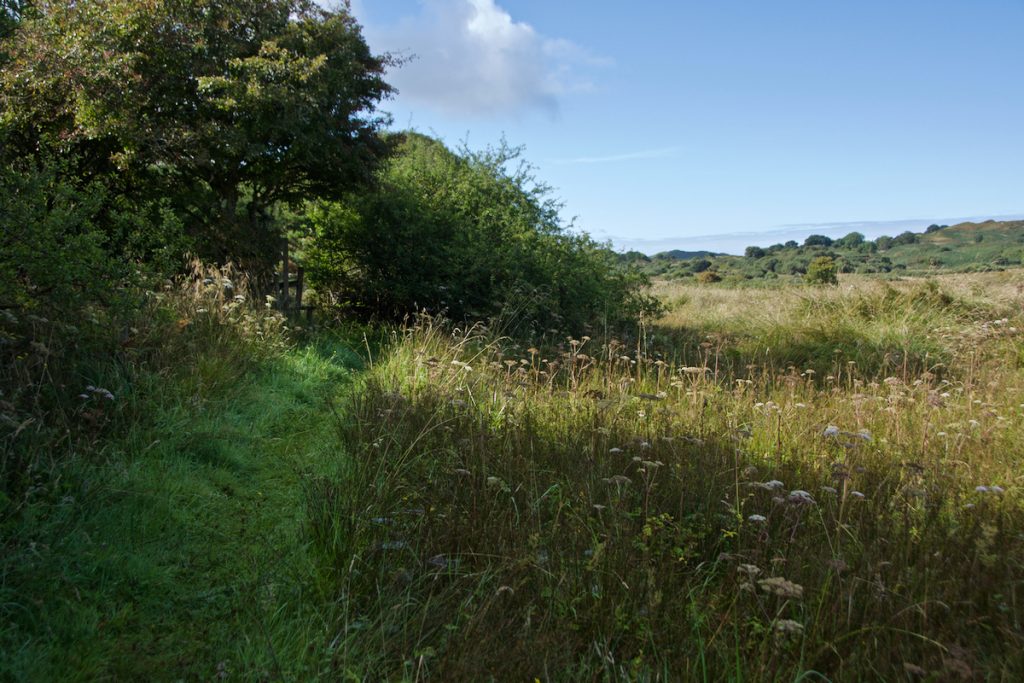 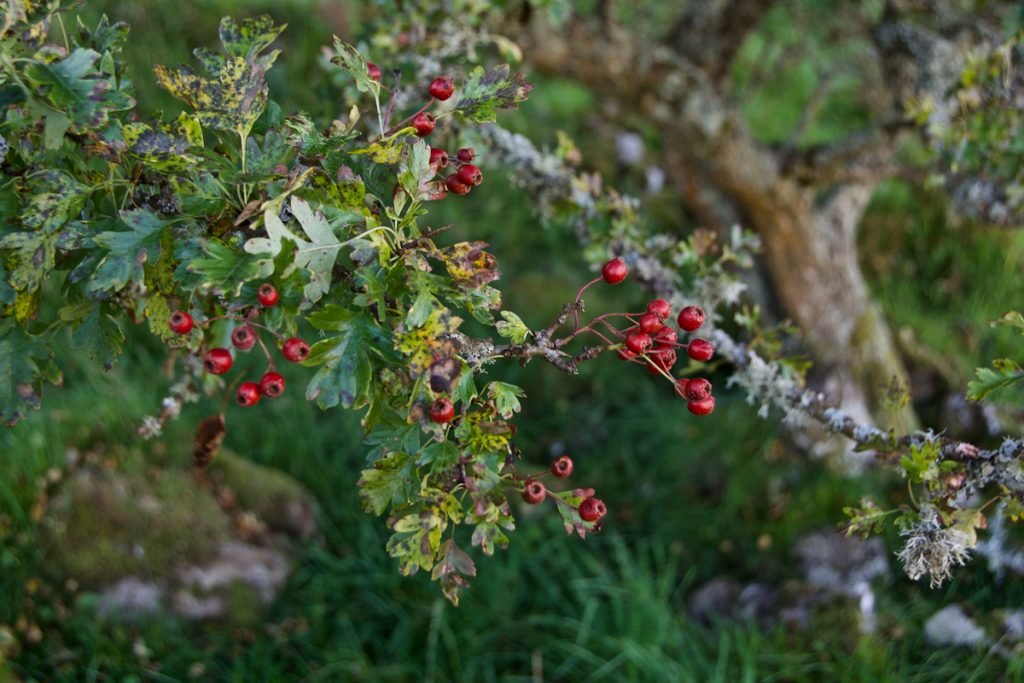 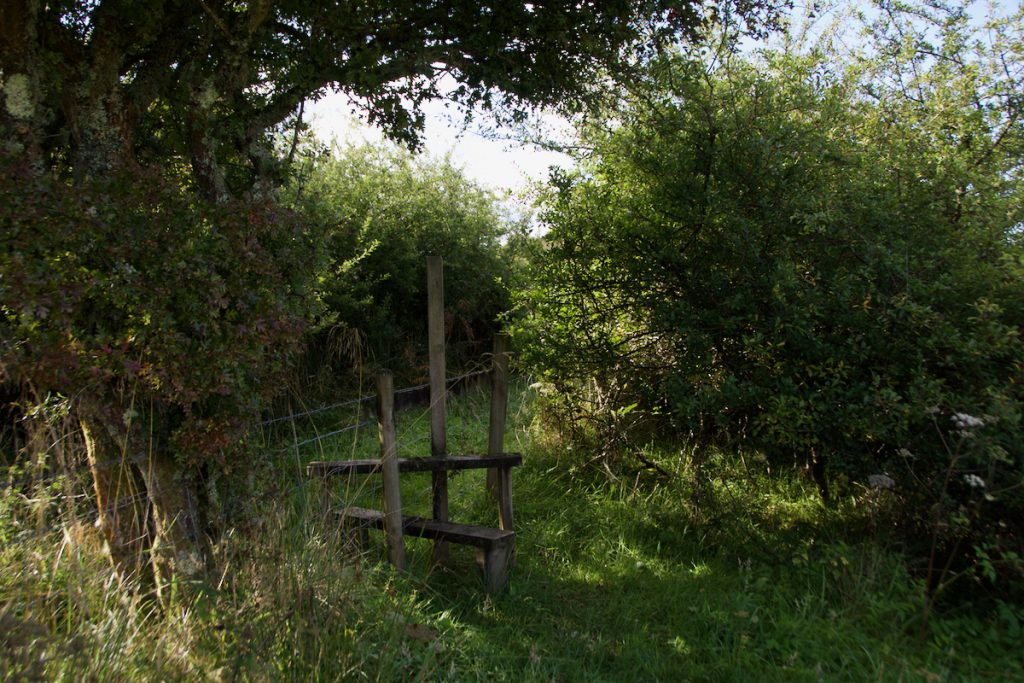 The footpath skirts a sheep field with old hawthorn and rowan trees growing out of rocky outcrops. Slightly to the west is Ballachuan Loch, shallow and reedy; that morning it held a small gathering of wigeon. We crossed the bridge over the old channel that joins the loch to the sea, and I stopped to admire a lovely hazel that was bending low over the field. Hazels are not the most graceful of trees – they don’t make flowing curves like birch or ash – but this one was doing her best, holding her leaves like bunches of handkerchieves in the way that hazels do, and sporting vivid flashes of autumn yellow. 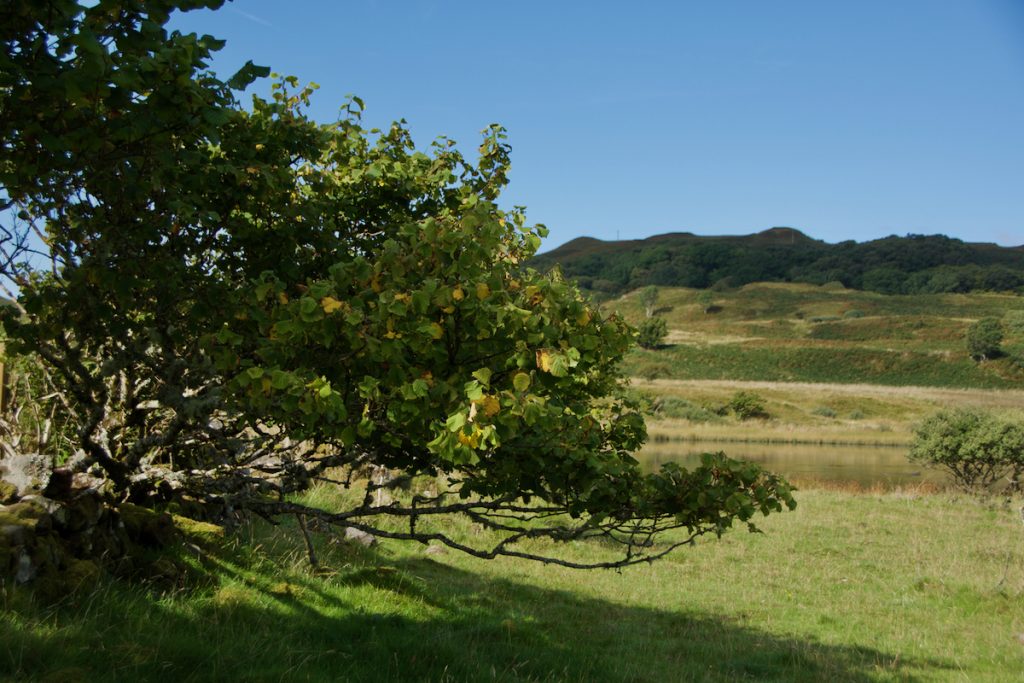 We chose to take the same route into the wood that we’d followed in the spring, walking past the signposted entrance and climbing a slope to the south. This wasn’t the best idea, because the bracken was waist-high, but we persisted, and eventually emerged thankfully onto the bracken-free floor beneath the hazel canopy. 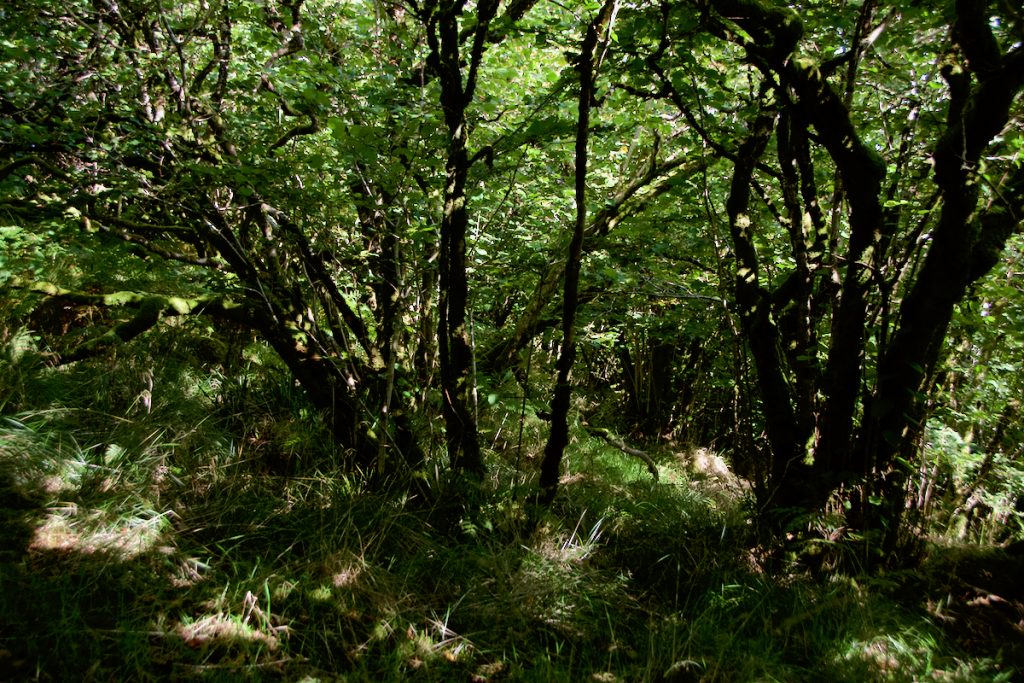 In the greenish half-light, I could see that the ground was already strewn with unripe hazelnuts, possibly discarded by squirrels, and all kinds of fungi were emerging through the litter. Delicate white or purple parasols, little colonies of orange and cream toadstools, weird yellow ooze… even a type of glue fungus, hard to see, but you can easily detect it purely because it glues branches together, so that a fallen twig is caught, apparently by magic, and suspended against another. 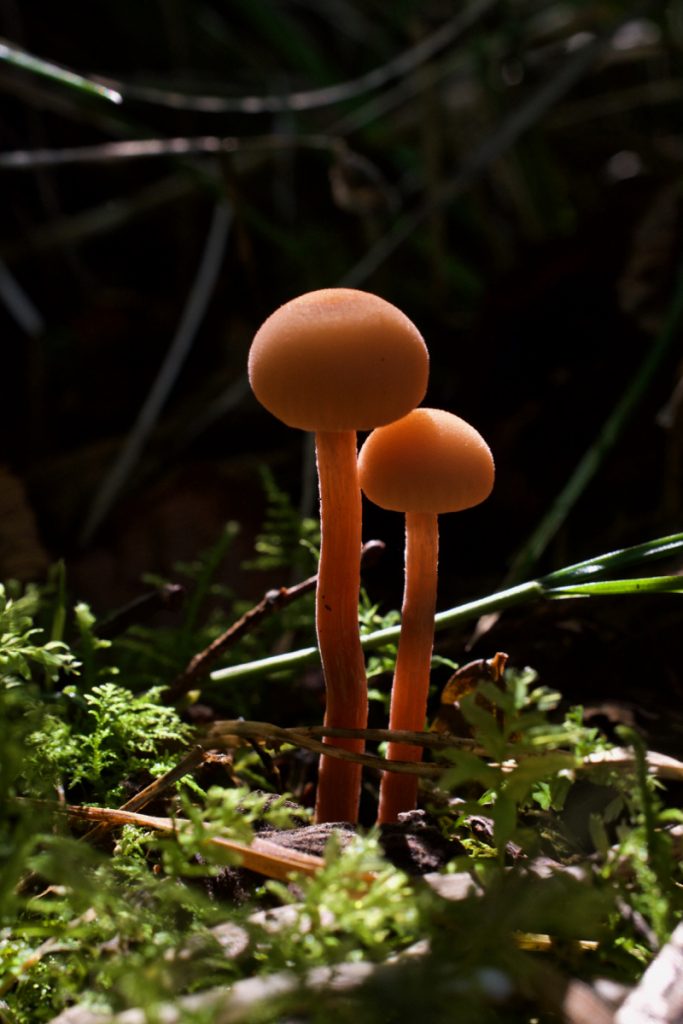 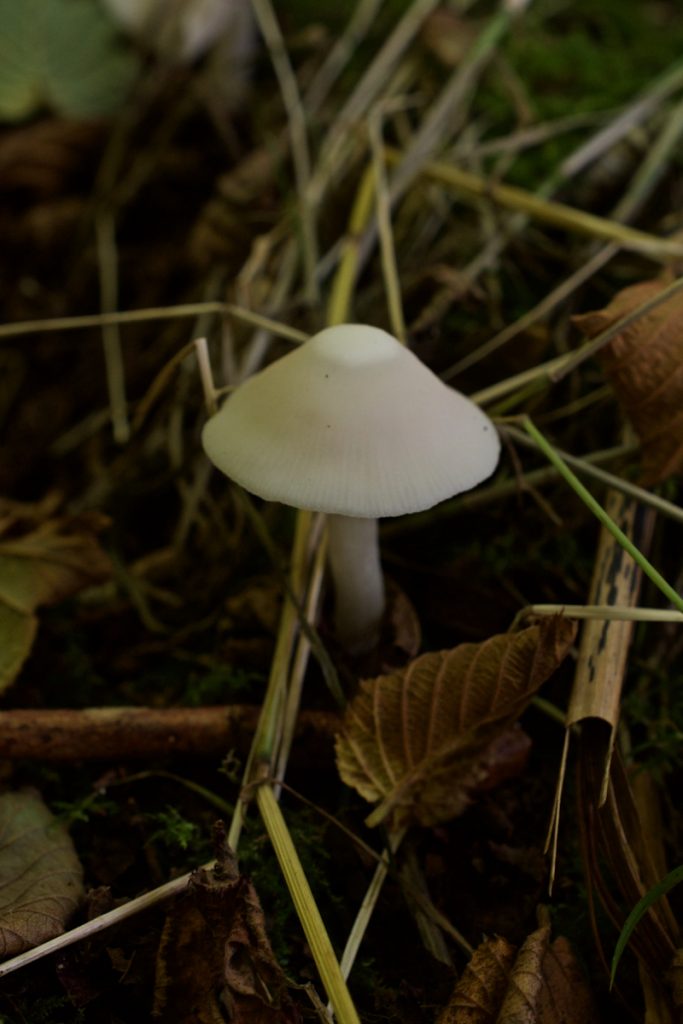 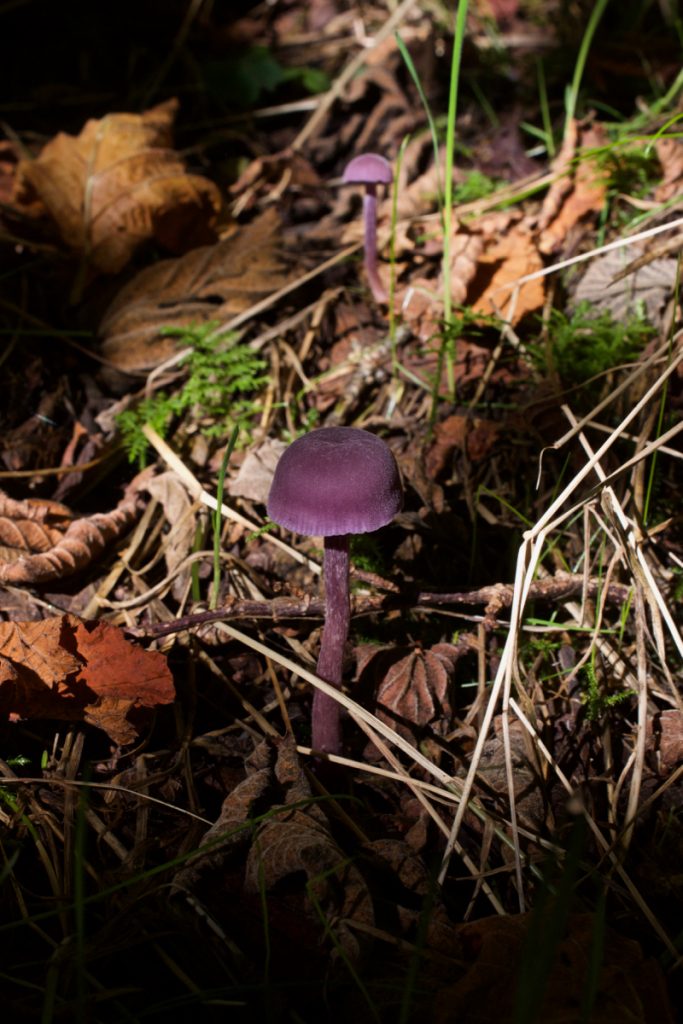 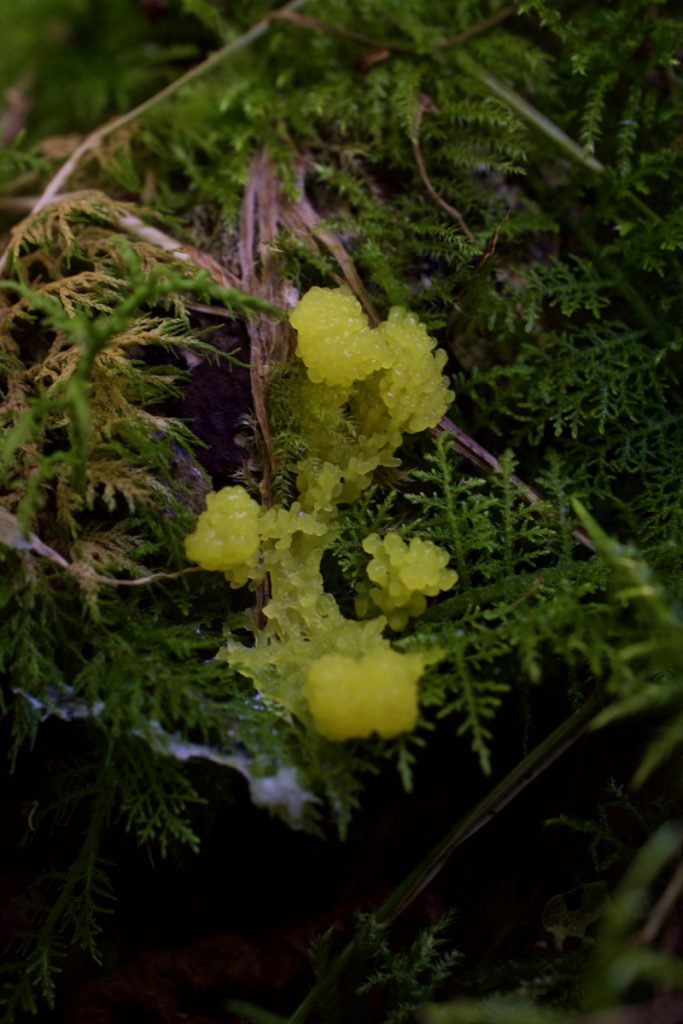 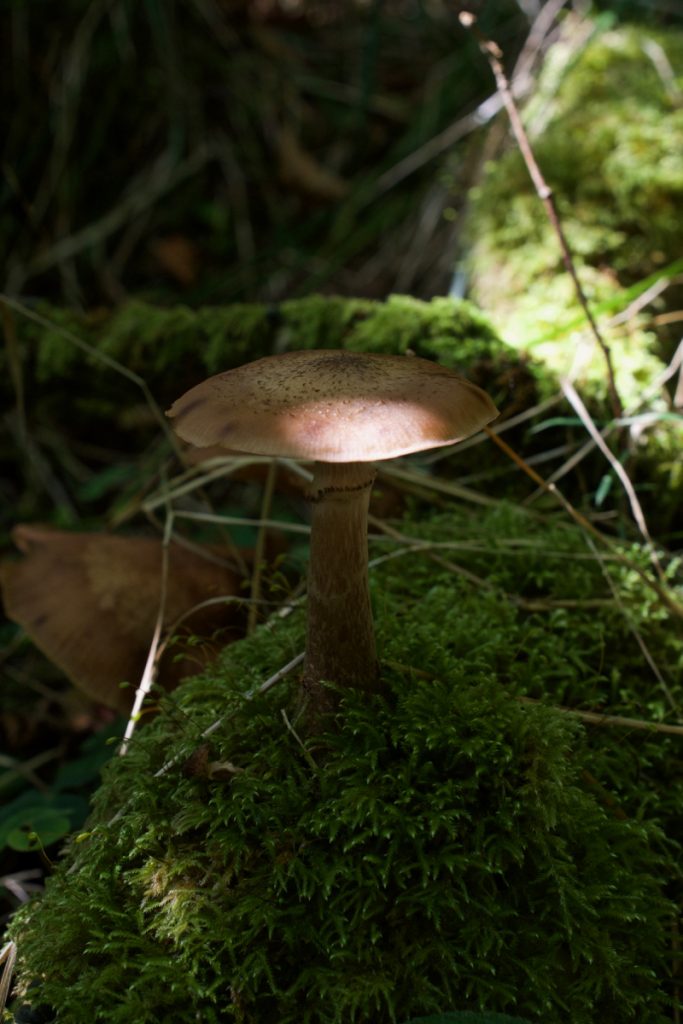 And hazel gloves… yes, we did see it, although it took some finding. Masses of fingers radiate from a central point, making a kind of floret that hugs a branch and looks like a hand from all directions. The examples we found were perhaps two or three inches across, and brightly coloured. 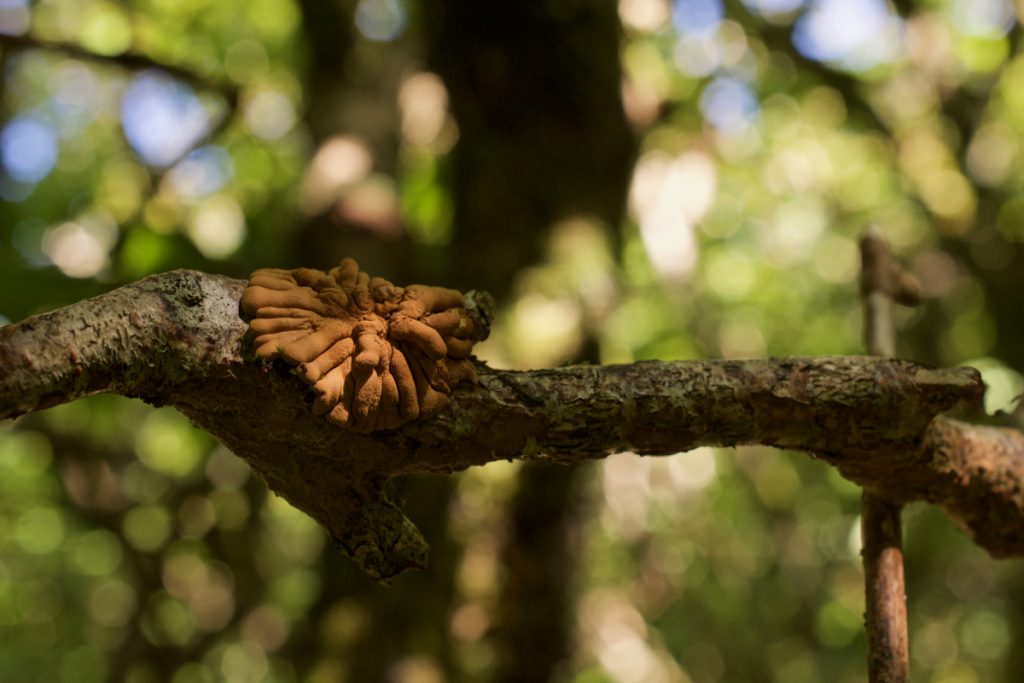 Hazel gloves… see also the twig caught by glue fungus (above, on the right) 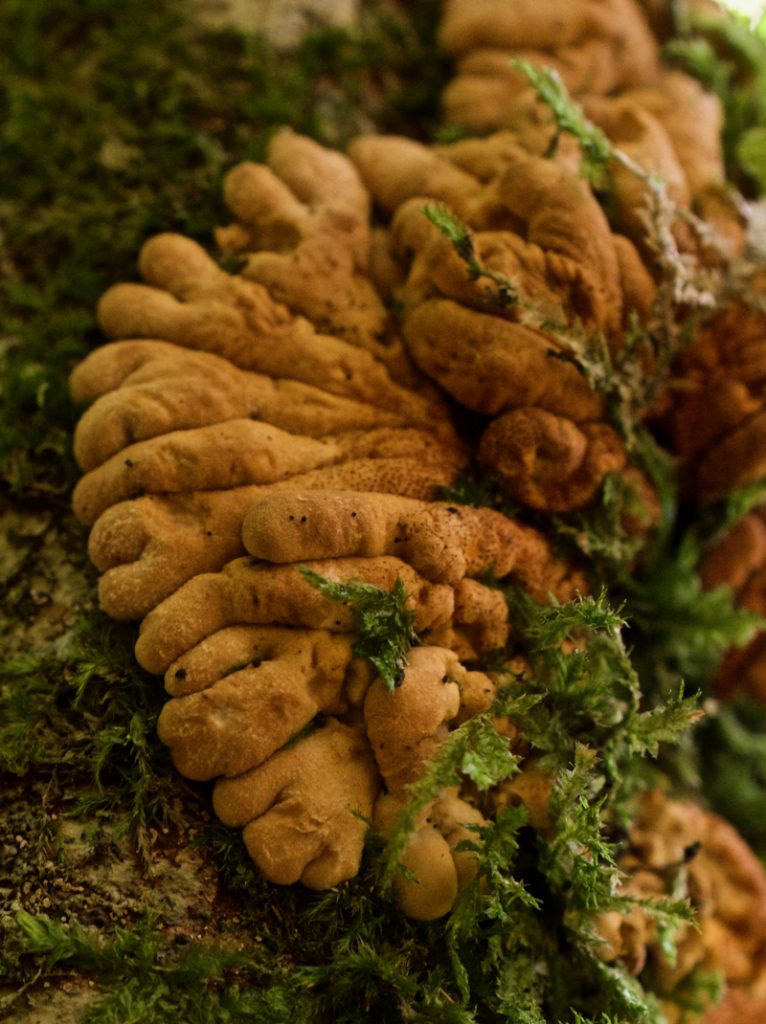 Hardly any birdsong now… the vibrant atmosphere of spring has given way to stillness and slow surrender. We were picking our way through a silent theatre of indistinct shapes and shadows, inhabited by ethereal things that rise quickly from decay, like ghosts themselves. Bent almost double to avoid the low branches, you are already yielding to their world, coming closer to their domain; it’s easy to get disorientated, to mistrust your senses. It’s a good job that Colin can find his way through a wood, or else I’d probably still be there. 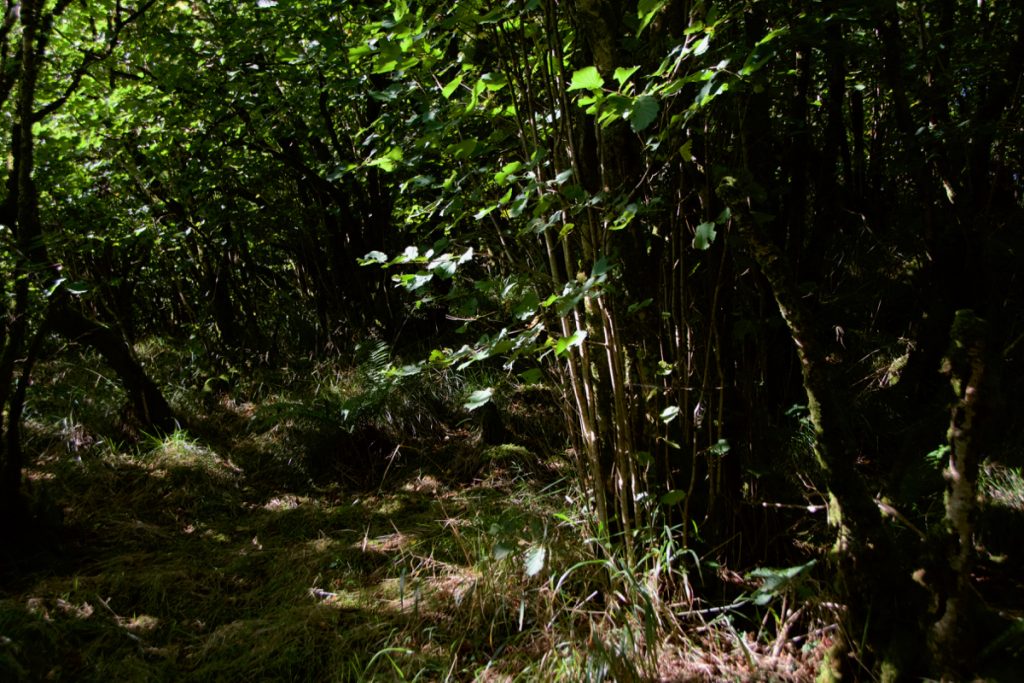 I love to think of Ballachuan at night, while tawny owls call overhead and perhaps a roe deer steps sure-footed through the darkness. But people? Hobbits, perhaps. If our distant ancestors hunted there, I can only admire their skill.

Back in the sheep field and full daylight, a few tattered butterflies were flitting around the heads of cow parsley. We stopped to admire the wild rose hips and taste the blackberries, and then walked slowly back up to the road, where the church of St Brendan overlooks the landscape like a sleeping guardian.

There are a few hazelnuts still in my pocket, the latest generation in an unbroken cycle of seasons that stretches back maybe 10,000 years. Over the winter I’ll enjoy getting them out occasionally and pondering on that. 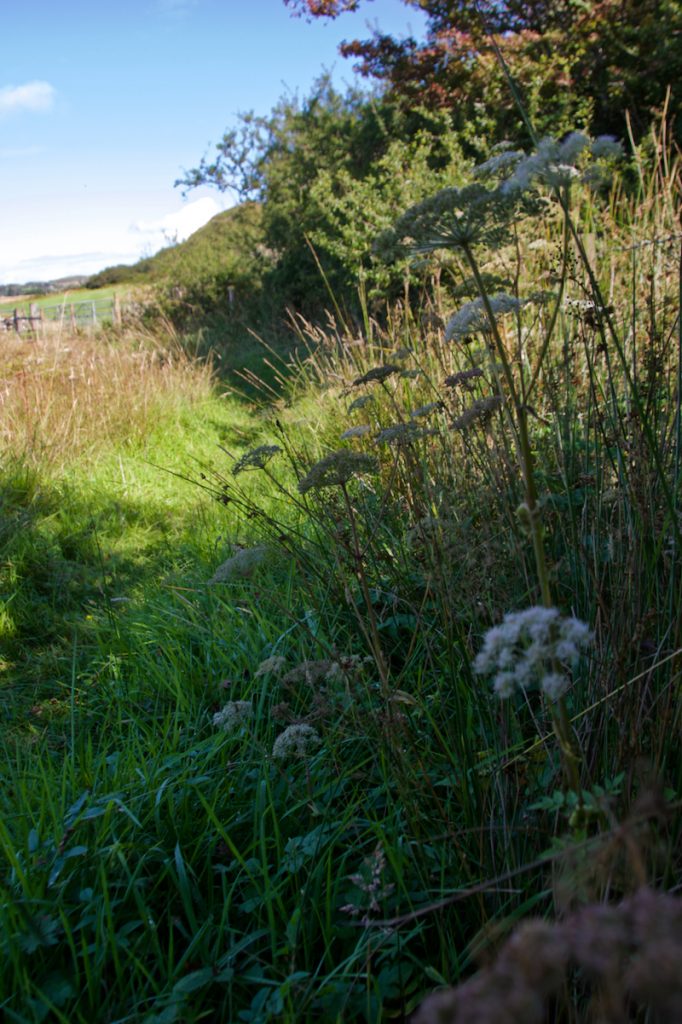 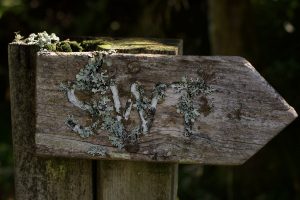 Ballachuan is pronounced roughly ‘Balla-HOO-an’ and comes from the Gaelic meaning ‘settlement by the sea’.   That’s interesting in itself.   Several archaeological sites are marked on the Canmore database including the remains of an old chapel which we’ll go and look for in winter.