The three boasts of Knapdale:
the fish cruives* of Loch Crinan,
the deer forest of Bacan’s glen,
and the dark mill of Coilebar.

Just a short distance further on from Kilmory Oib, submerged in the deep shade of tall trees, is Kilmory Mill.

This old place has a long history – and it played an important role in the daily lives of the communities that once lived in this part of Knapdale.

The exact date of its construction is not known.  In 1542, however, a charter by Archibald Campbell to Neil MacNeil of Taynish includes a “grain miln newly built by the granter on the lands of Ob and Kilmore and the mill land called the Two Gartane Mollyn, with pasturage for 2 cows and 1 horse yearly on the lands of Kilmory of Gillebir.”  (Kilmartin Museum survey, 2014)

The mill and its enclosures (the ‘Two Gartane‘) remained with the MacNeils of Taynish until 1837.  It seems that the MacNeils sub-let the mill to tenants including Gillecallum McDowill in 1582;  Malcolm McGillergin in 1669;  and Archibald McKisage (McKessock) in 1747.  The last miller was Neil MacCallum, named in the census of 1851.

“…the rights to run the mill included land and grazing for livestock on the estate land.”
(Forestry Commission Scotland) 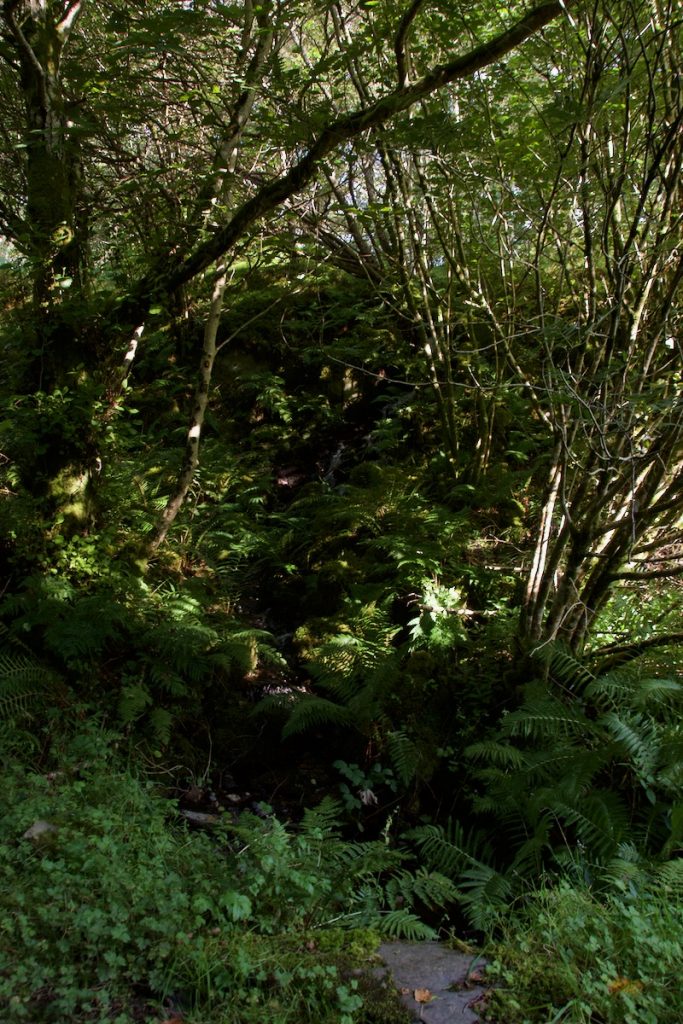 The mill wheel would have been powered by a lade that still tumbles down directly from Loch Coille Bharr.   The building actually stands below the level of the water, and so it has the entire loch as its mill pond – it would certainly never run short of power!    Maybe this is one reason why it is quoted as one of the ‘three boasts of Knapdale’ in the intriguing verse above.

A survey by Kilmory Museum reveals that the earliest phase of building lies at the northern end, where a wide arched doorway still survives.   This is considered to be the entrance to a loading bay, and the original building would have extended further north, closer to the source of water.  Sometime later, a drying room was added at the south end. 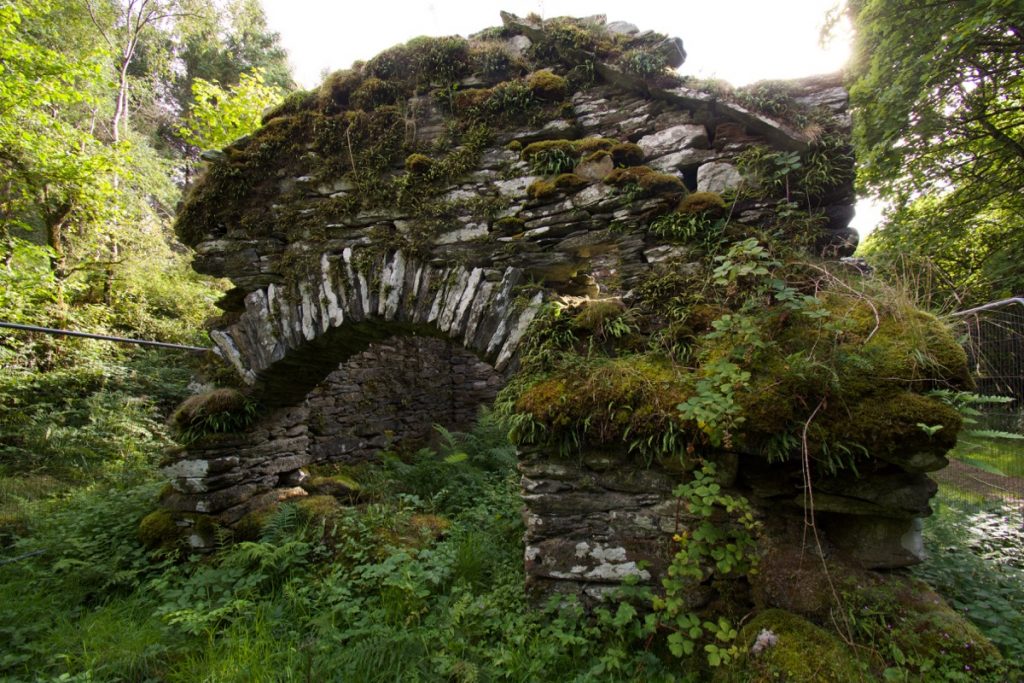 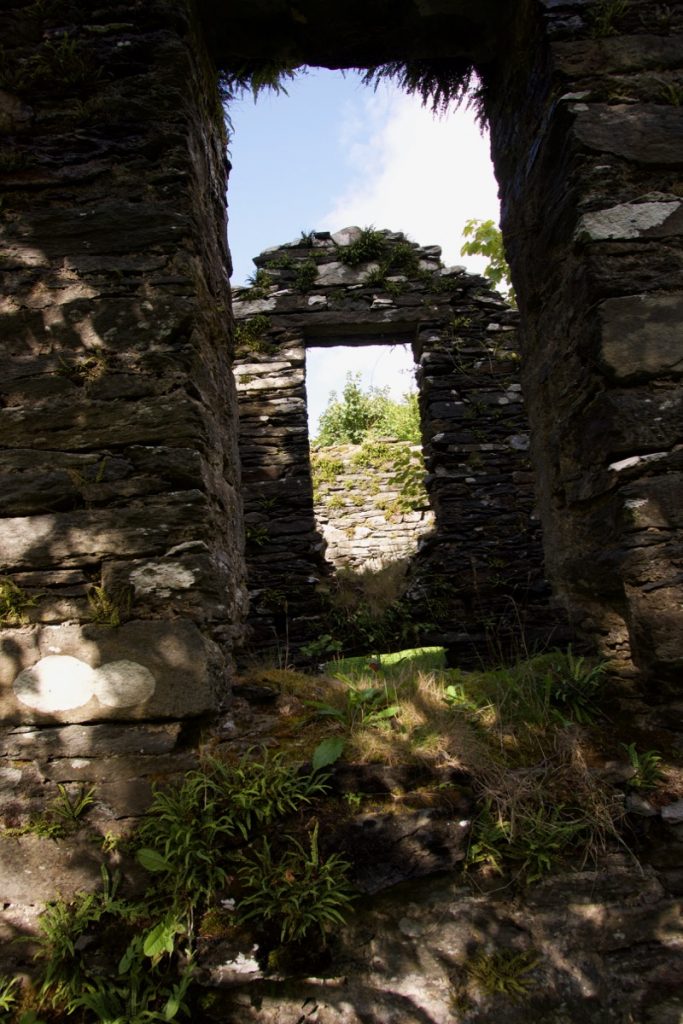 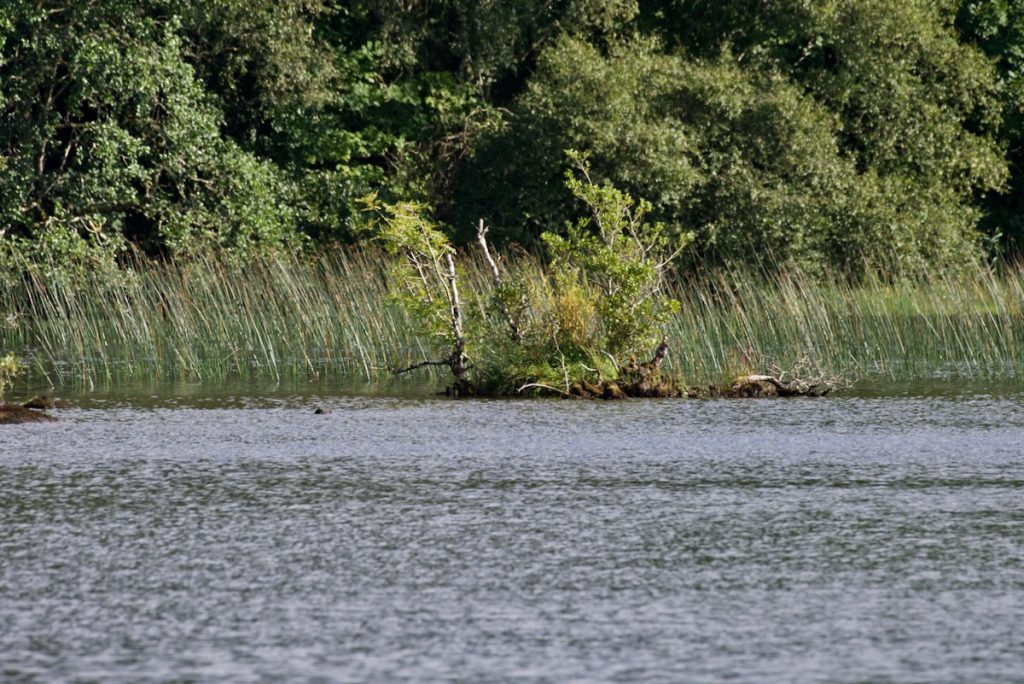 The first edition Ordnance Survey map (1873-1880) also shows three roofed buildings – possibly dwelling houses – on the other side of the track, but we saw no trace of these.  It is thought that most of the stones may have been plundered, and the remaining foundations are now very much overgrown.

According to a traditional story, Kilmory Mill was an unlikely refuge for a laird’s wife who was fleeing from her murderous husband.  I remember telling some of the story when I wrote about the Macleans of Duart Castle… 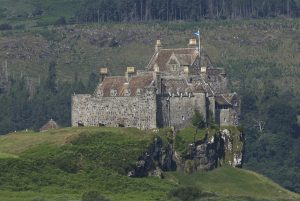 The 11th chief of the Duart Macleans, Lachlan Cattanach (c.1465-1523) took a vicious dislike to his second wife, Katherine, reputedly because she had failed to give birth to an heir.  One story says that Katherine tried to poison her husband.  Lachlan took her to a small tidal island, now known as Lady’s Rock, in the Sound of Mull, and left her to drown.  Next morning, he reported her death to her brother, the Earl of Argyll.

Katherine didn’t die, however.  She was rescued by a passing fishing boat, and taken back to Kilmory Mill for shelter.   When she had recovered from her ordeal, she fled to Inveraray to be with her brother, the Earl of Argyll, and it was there, at a banquet, that Lachlan was surprised to discover her, a few days later.   Soon afterwards, Lachlan was murdered in Edinburgh.

According to the story, the Earl of Argyll granted the mill to his sister’s rescuers, out of gratitude.  (There is another version of the tale, however, that claims Katherine was saved by her husband’s servants who disobeyed orders.) 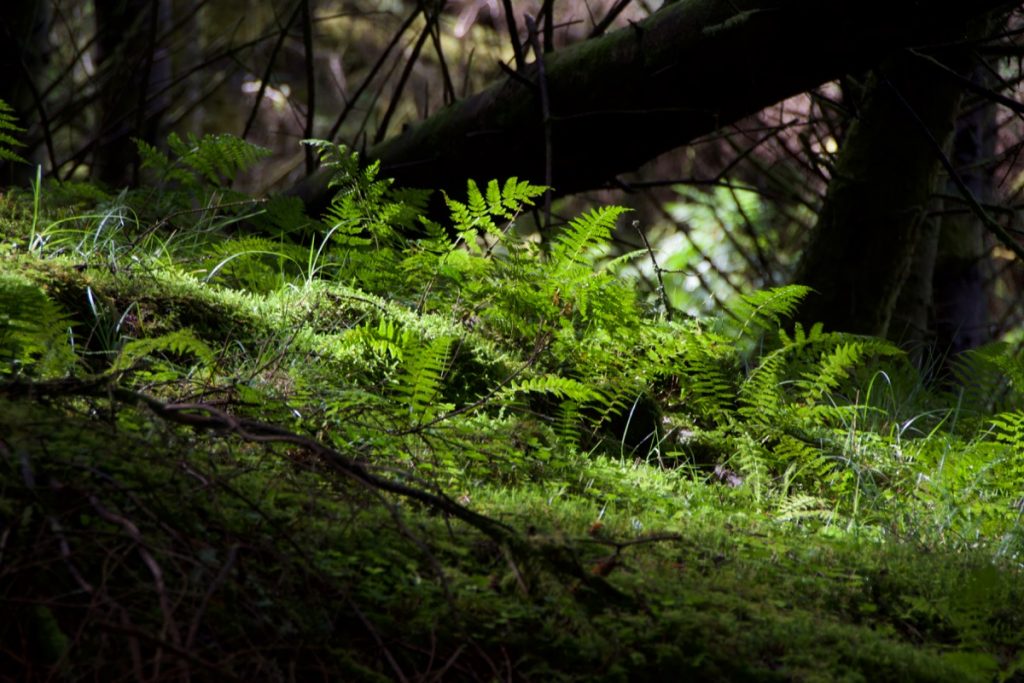 The atmosphere around Kilmory Mill is one of absolute peace, with the constant gushing of the lade and the whispering of trees overhead.  The old road that leads past it follows the shore of Loch Coille Bharr and ends up on a spur of land in Loch Sween;  we were surprised at the surface of this road, which certainly looks well made, with stones carefully laid and a gentle ‘crown’ or dome in the centre – this is an old cart path, for sure, probably one of the roads for which the tenants of Kilmory Oib paid taxes in the 1800s. 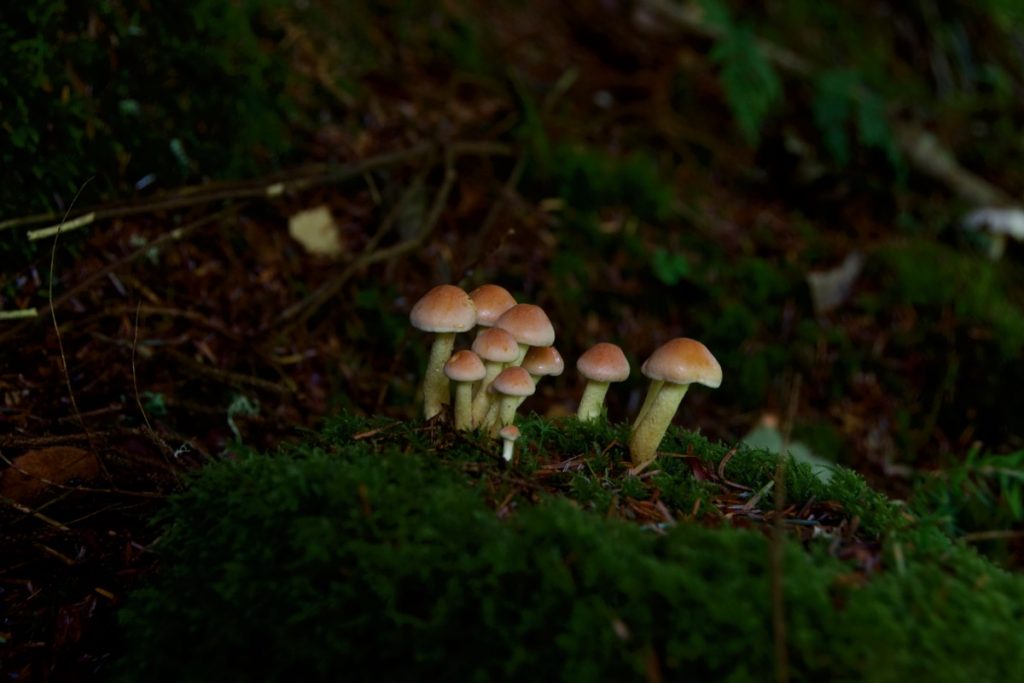 On shady platforms under the trees, little crops of golden toadstools had pushed their heads through the moss.  Summer was on the wane, but the breeze was still warm and butterflies flickered in the shafts of sunlight.  The last miller of Kilmory would probably have left in the mid-1800s, along with his family, in the more general, sweeping clearance of the Highland glens.  It’s hard to believe that his heart didn’t ache for the ‘dark mill of Coilebar’. 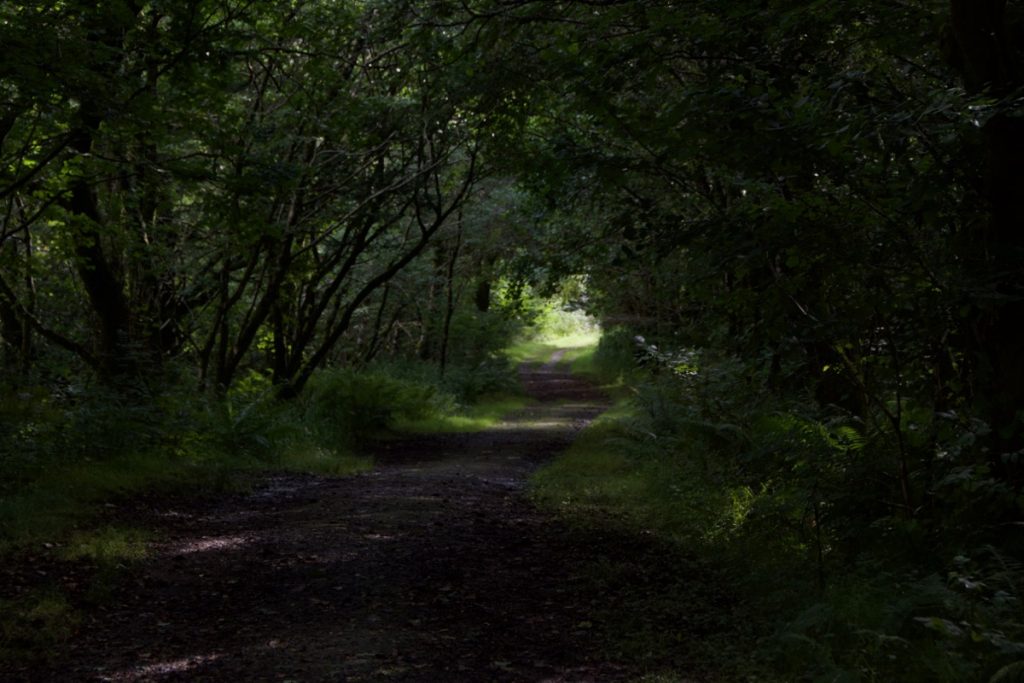 *If anyone can tell me what a fish cruive is, I’d be interested to know!  I’m thinking it might be some kind of static fish trap.