Steady rain this evening. As I listen to the heavy drops from the trees drumming on the roof, I imagine the houses of Arichonan, where it is raining too. Beading on the branches of spruce trees, soaking into cushions of moss and lichen, dripping off bracken fronds, running down the old stone walls. 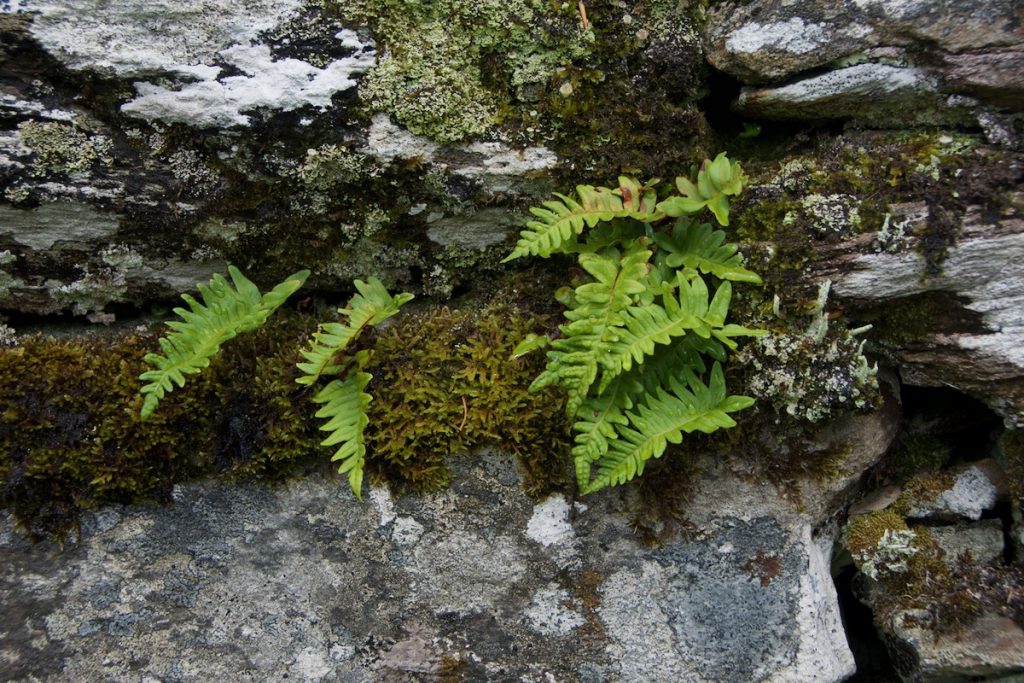 Kilmartin Museum offers occasional guided tours to local places of historical interest, and a few weeks ago I joined a trip to an abandoned village.  After a long spell of hot, dry weather, the morning of the visit brought torrential rain.  Out came the waterproof trousers.

Everyone who met in the car park at the Kilmartin Museum seemed similarly kitted out and determined to enjoy the day regardless. Kindly shepherded by Julia, the Museum’s Education & Outreach Officer, we climbed into a minibus for a short drive down towards Tayvallich. Within half an hour we were walking up a track that rises out of Knapdale’s forest.

We stopped briefly at a bend in the path, to look north down the line of an old road that once led diagonally up the hillside; in the opposite direction, rain clouds were shredding and drifting wraith-like across Caol Scotnish, a finger-like spur of Loch Sween. We carried on, passing through some mature woodland, over an old and beautifully-built bridge across a tumbling burn, and along a path that eventually opened out into a clearing. Through a blur of rain, the remains of old buildings could be seen among the grass and bracken. This was Arichonan. 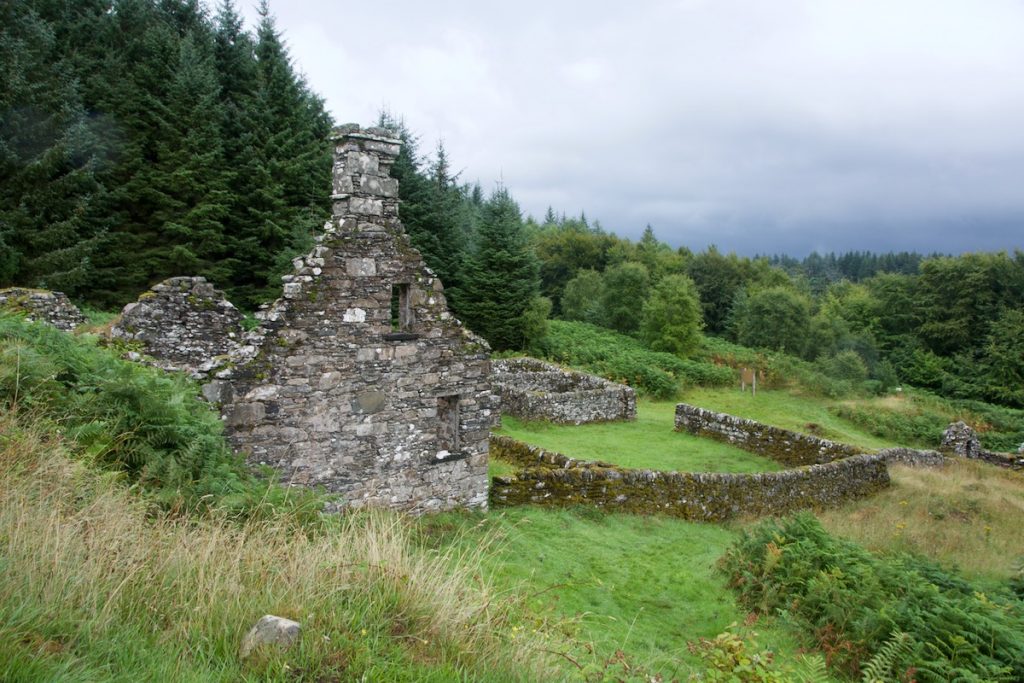 The oldest records of a settlement here are from the 1600s; the history may go back many centuries further. The name means ‘Conan’s shieling’ referring to the tradition of taking cattle up onto higher ground in the summer months, when the herdsmen and their families would live in purpose-built huts. The surviving buildings, we soon learned, date mostly from the 18th and 19th centuries, and may have been built upon older stone structures that included clay and wattle;  the roofs would have been made of turf or heather.

For several hundred years, the inhabitants of Knapdale would have kept cattle and grown crops. The general opinion is that, between the 16th and 19th centuries, these farms became settlements occupied by several tenants and their families, often with labourers and servants.  If Arichonan had started life as a summer pasture many centuries before, it must, by this stage, have become occupied all year round.  By the 1800s there were local schools, and children on the census are listed as ‘scholars’.  A nearby mill would grind the grain for flour;  black cattle reared on the hillsides were sent along drovers’ routes to markets as far away as Falkirk. 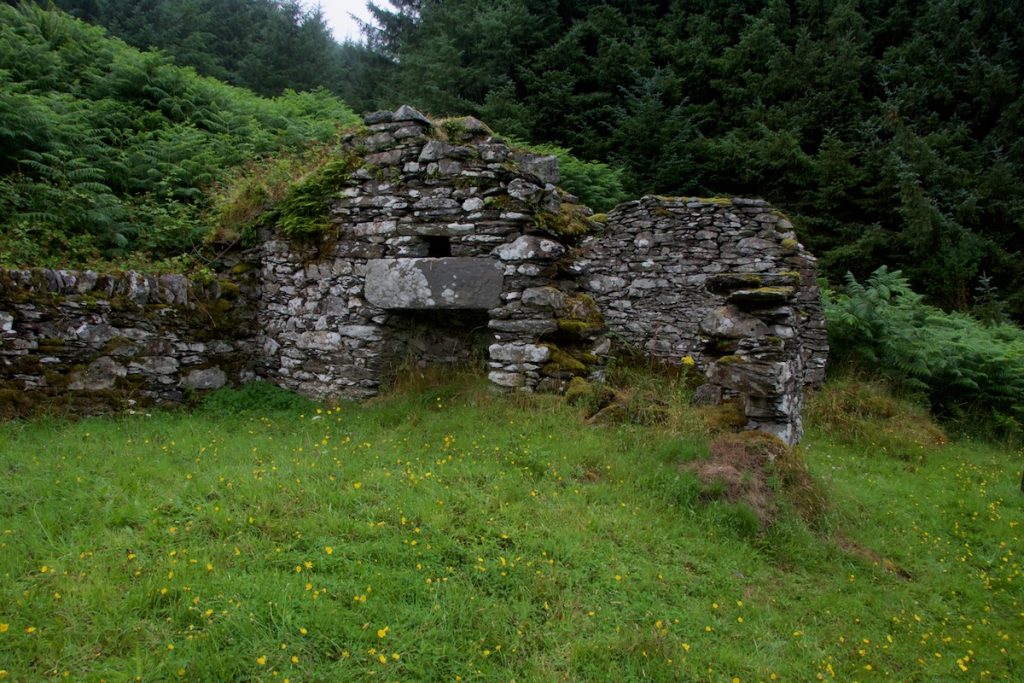 Above & below:  The barn, with small triangular windows which allowed ventilation for winnowing the grain 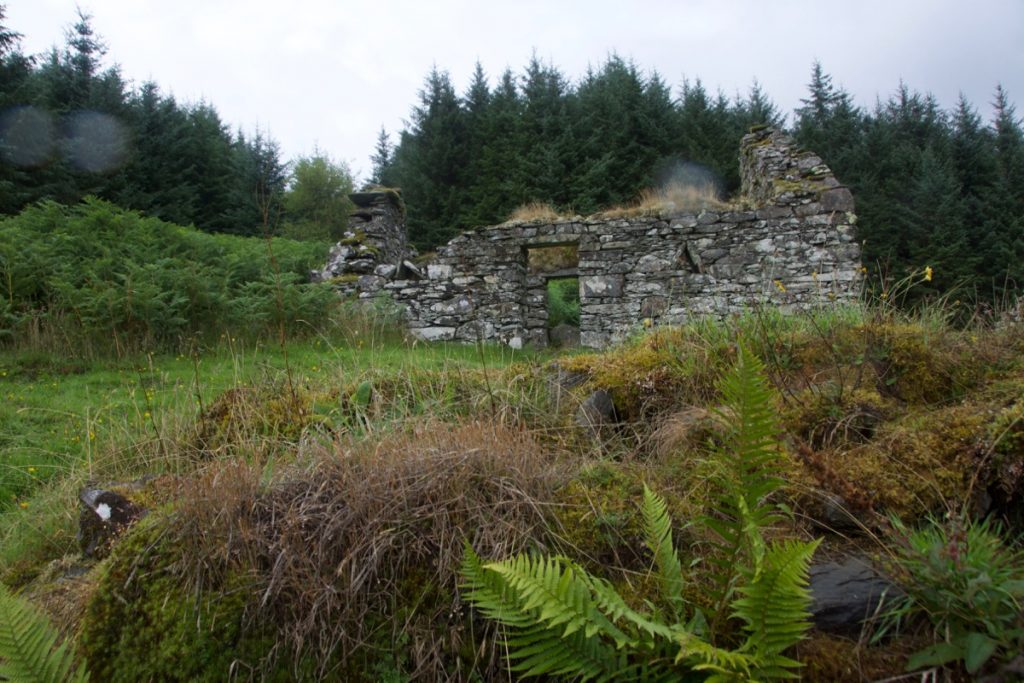 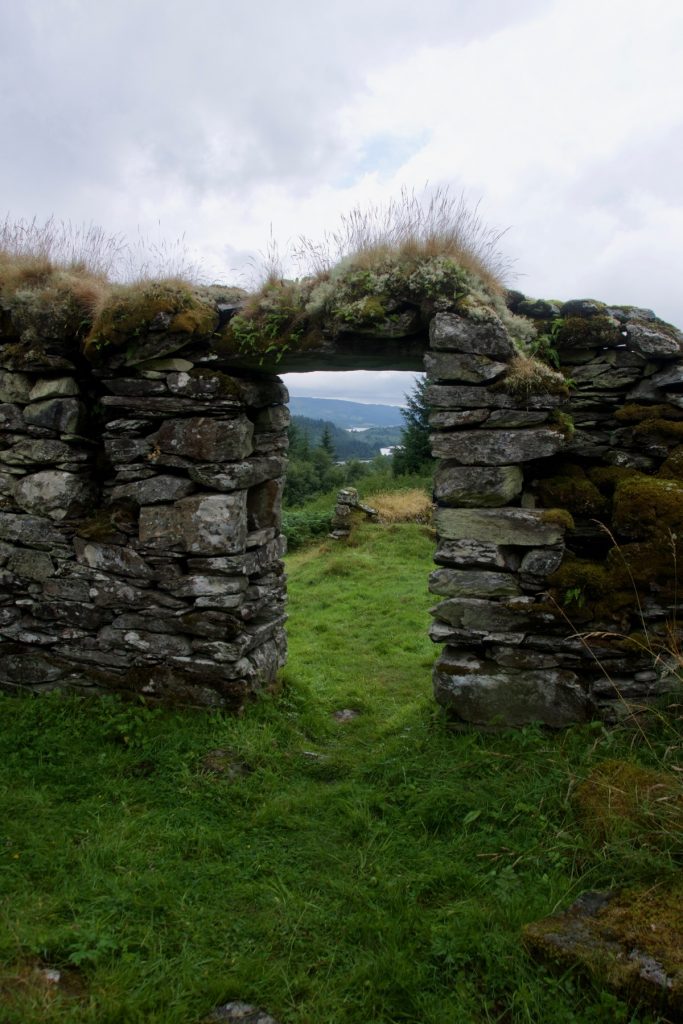 A burgeoning population squeezed into increasingly cramped dwellings was particularly vulnerable to disaster such as crop failure; the early 1800s also saw a drop in cattle prices, pushing the tenants further towards starvation. At the same time, among landowners there was a movement towards agricultural ‘improvement’ in the Highlands as a whole. Under this new method of estate management, large-scale sheep farming took precedence over small-scale holdings, and settlements such as Arichonan were considered unnecessary.

The time of the Highland clearances is still a sad and sensitive episode in Scotland’s history. Not all landlords evicted their tenants forcibly; every settlement and every glen has a different story to tell. Individual stories, in many cases, still lie hidden. The fact remains that thousands of families left their homeland to begin new lives overseas – many in Canada and Australia. 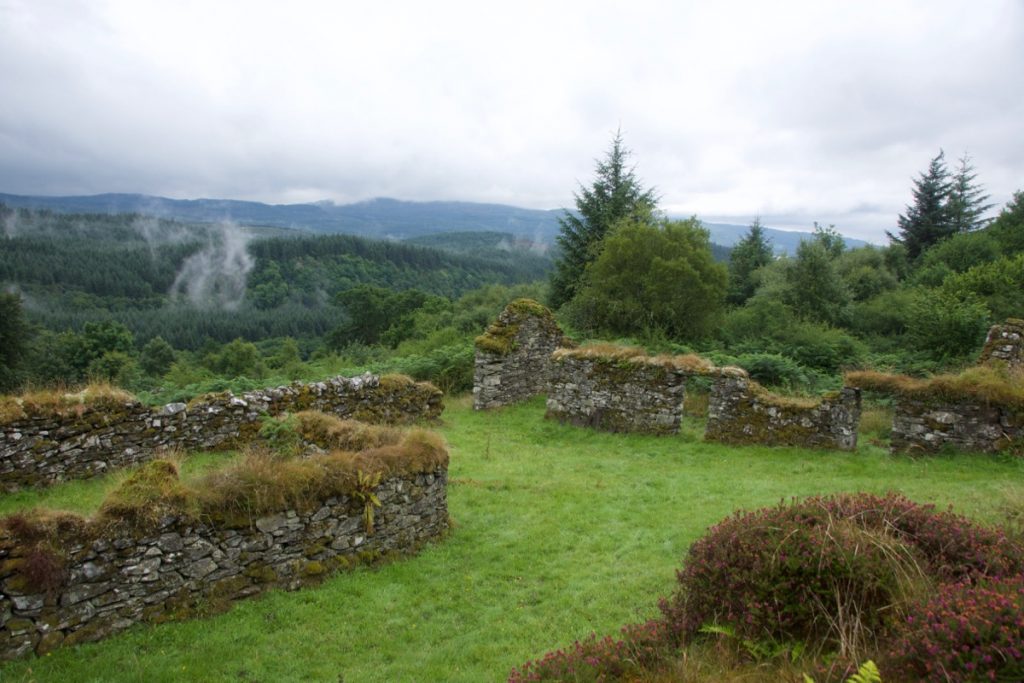 At Arichonan, on 4th April 1848, the tenants received formal notice that their leases would be terminated on 27th May, which was Whit Sunday. By that date, they were expected to “flit and remove themselves” along with all their belongings. But when estate officials, backed up by the local constabulary, called to enforce the order, they were met with violence. The tenants had armed themselves with sticks and stones, and their numbers were swelled by people from neighbouring settlements who no doubt feared the same fate. Over 100 people, women as well as men, had turned out to fight. Some were arrested, and a few served short sentences in Inveraray jail. It was a valiant act of defiance, but it could not stop the momentum of change.

Niel or Neil MacMillan was one of the tenants of Arichonan, and his name can still be seen carved on a cottage wall. The MacMillans have a long history in this part of Knapdale – Castle Sween and the cross in Kilmory Knap Chapel bear witness to their former power. Other families included MacLeans, MacDougalls, MacLellans, MacLachlans, Campbells… it’s impossible to know where they all went and how they fared after they left Arichonan. 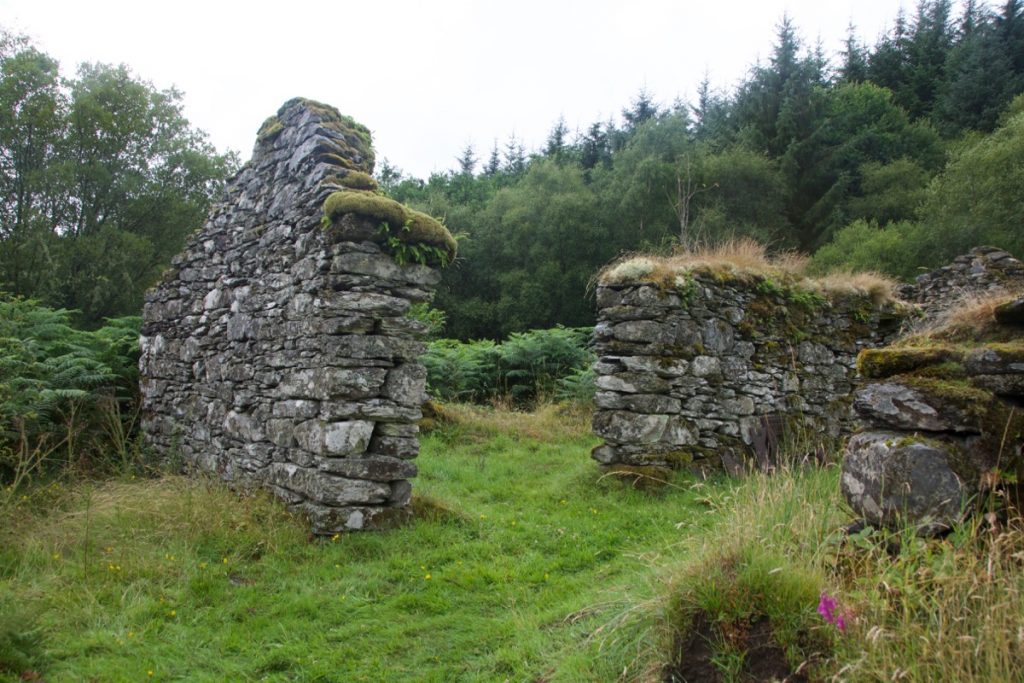 Above & below:  The wall where Niel MacMillan carved his name 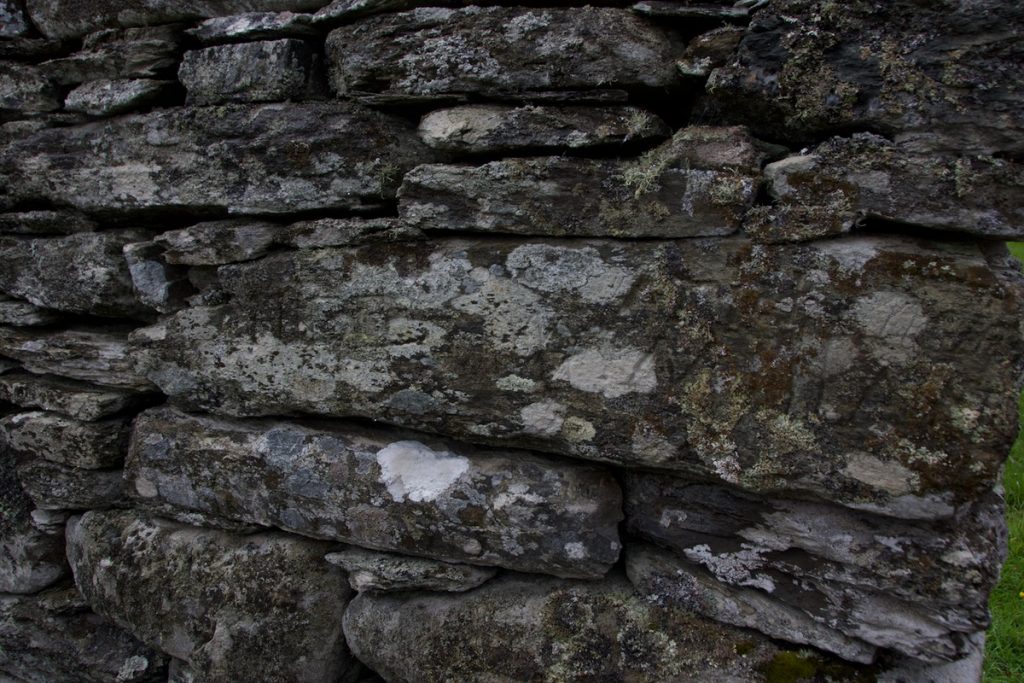 Surprisingly, three years after the riot, the 1851 census shows that 26 people were still living at Arichonan, but only one of them was a farmer. Niel MacMillan is listed as living with his sons Angus and Peter at nearby Kilmory Oib, but just over 20 years later this settlement also stood empty. Forestry Commission Scotland says: “It is unknown exactly when and how Kilmory was abandoned but the buildings are shown as unroofed by 1873 when the 1st edition Ordnance Survey map was published.”

At Arichonan, some of the buildings were later converted into a shepherd’s house and sheep pens. Others present something of a puzzle to historians in terms of their evolution and occupation. This is not a place that wants to give up its secrets. 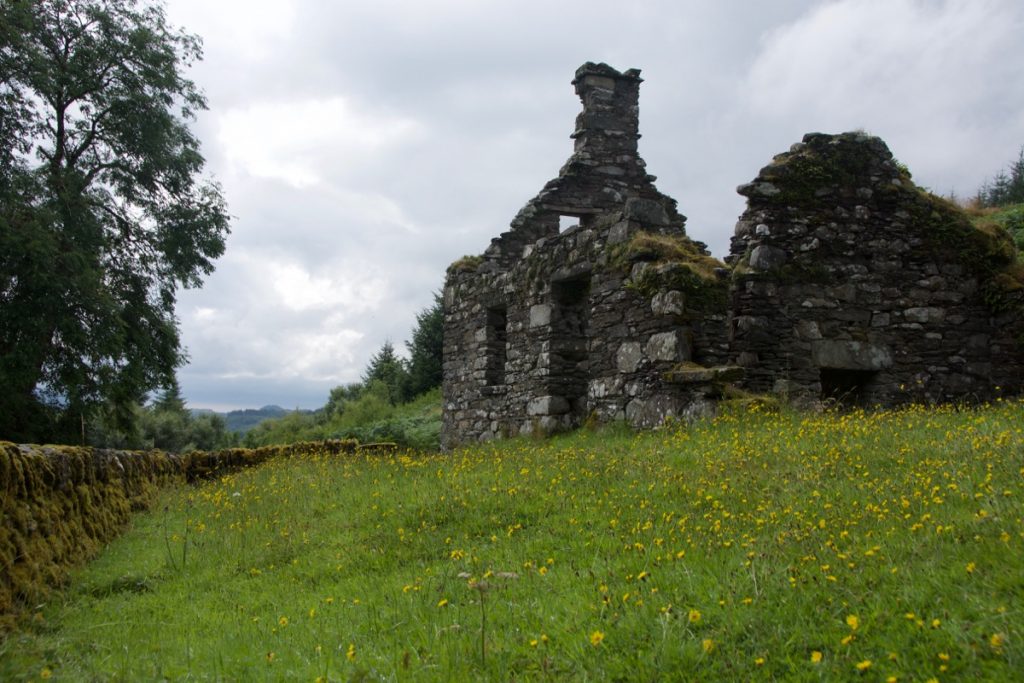 Above:  The ruins of a shepherd’s house 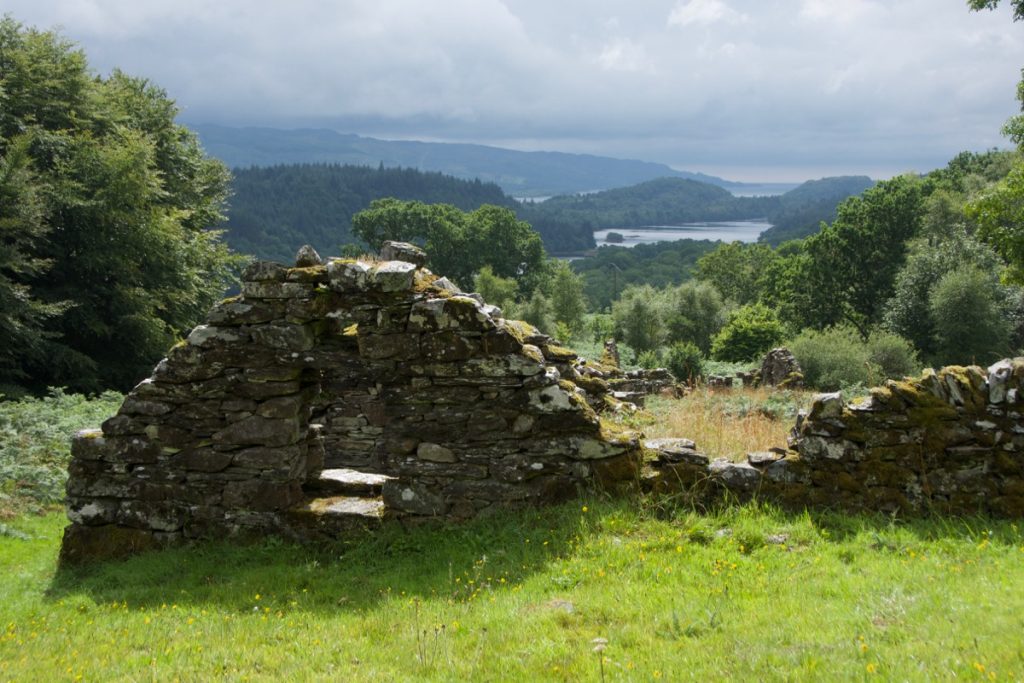 The showers continued to rattle in from the west, and we stood under a tree to eat our lunch. There were memories here, and we were conscious of them; the slate-grey sky seemed to match the reflective mood.  It was a comfort to listen to the rain, to breathe the smell of the wet earth.   We finished our walk around the site and prepared to leave;  at the last moment, the clouds parted and the houses were lit with sunshine.

Thanks to Julia Hamilton and the Kilmartin Museum

To find out what events are being offered by Kilmartin Museum, take a look at their website.