Our first visit to Kilmartin church was on a very wet day in March. We’d looked at the weather and thought, well, the stones will be moody and picturesque, and we’ve got waterproofs, haven’t we? Half an hour later, we were closing our eyes against the driving rain and trying – unsuccessfully – to point our cameras away from the wind.

We were right in one respect: water certainly brings out the contrast in old stone carvings, and the tombstones in the Poltalloch enclosure, which is open to the elements, were gloriously vivid. These stones originally covered graves of the Malcolm family of Poltalloch, and the oldest may date from the late 14th century. The central stone, which bears an elaborate coat of arms, was carved in 1685. Either side of it, two low-relief effigies of knights in armour were collecting pools of rainwater in the crooks of their arms; they looked as if they cared much less about the weather than we did. 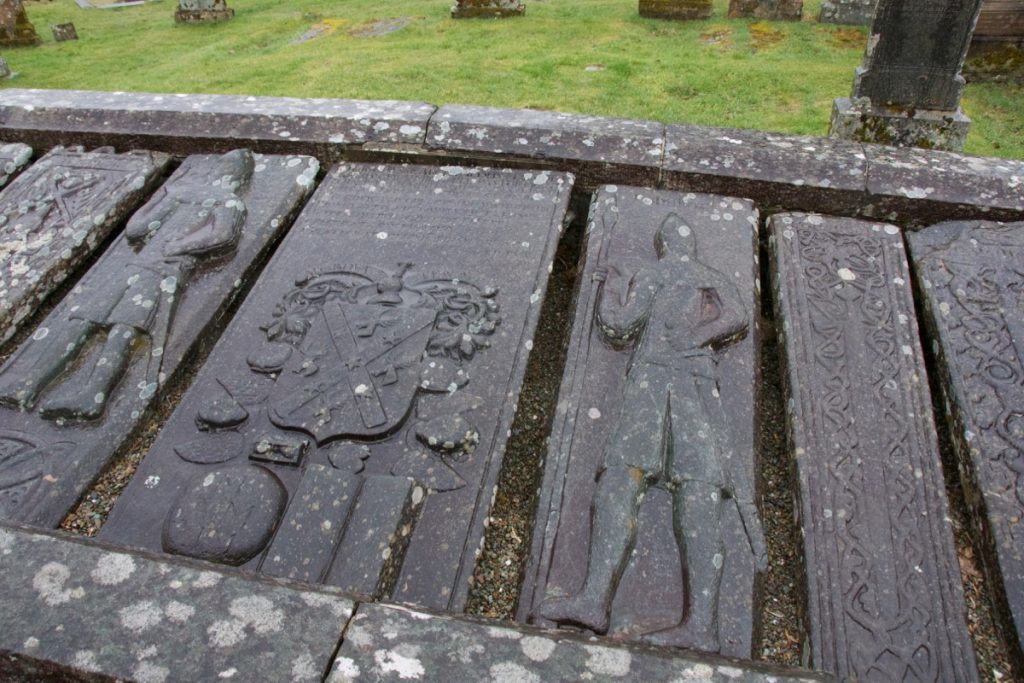 We noticed a small building with an ancient-looking lintel above the doorway, and splashed our way inside. Immediately, it felt like we’d just gatecrashed an elite and rather disdainful club.  The gloom of the day cast a shroud of dignity over the silent ranks of stones, including more warriors in battle dress.  Leaning against the walls, they faced each other like combatants who will never come to arms. 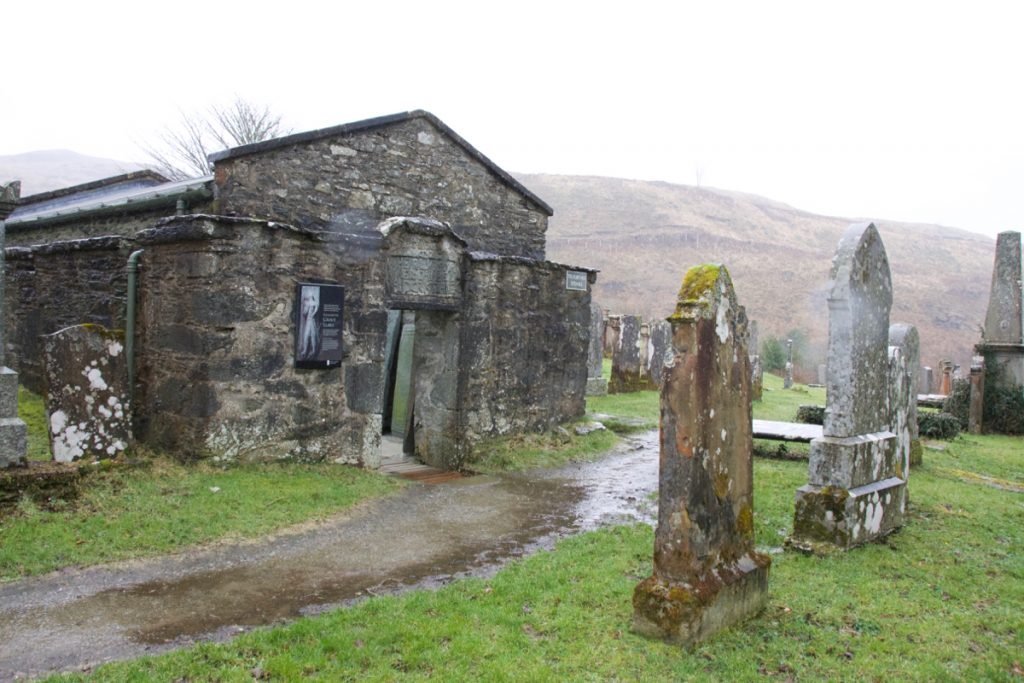 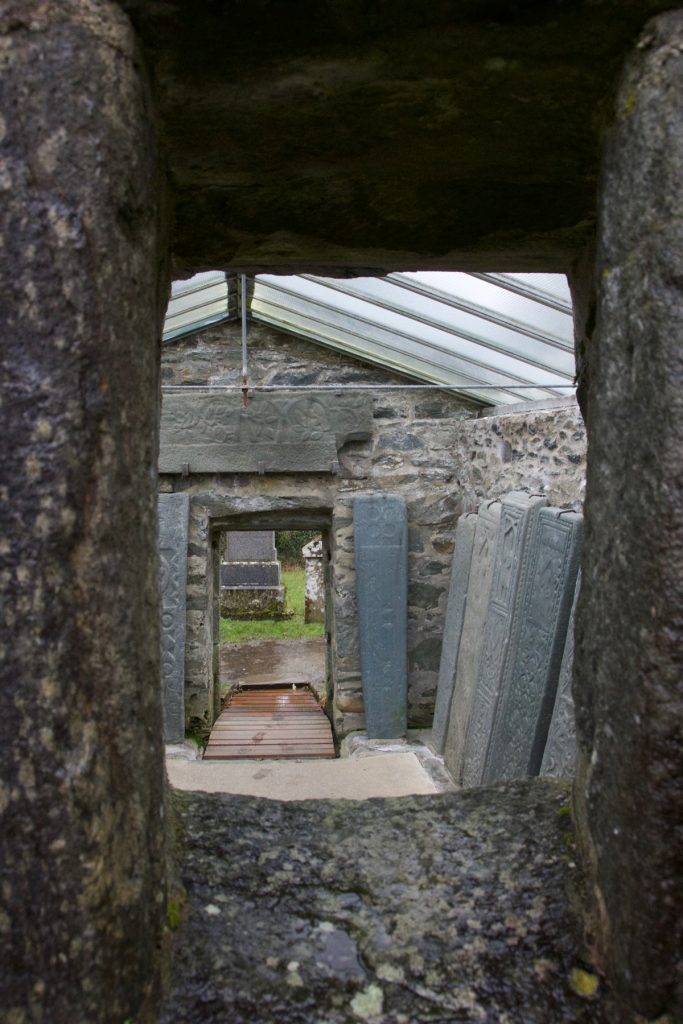 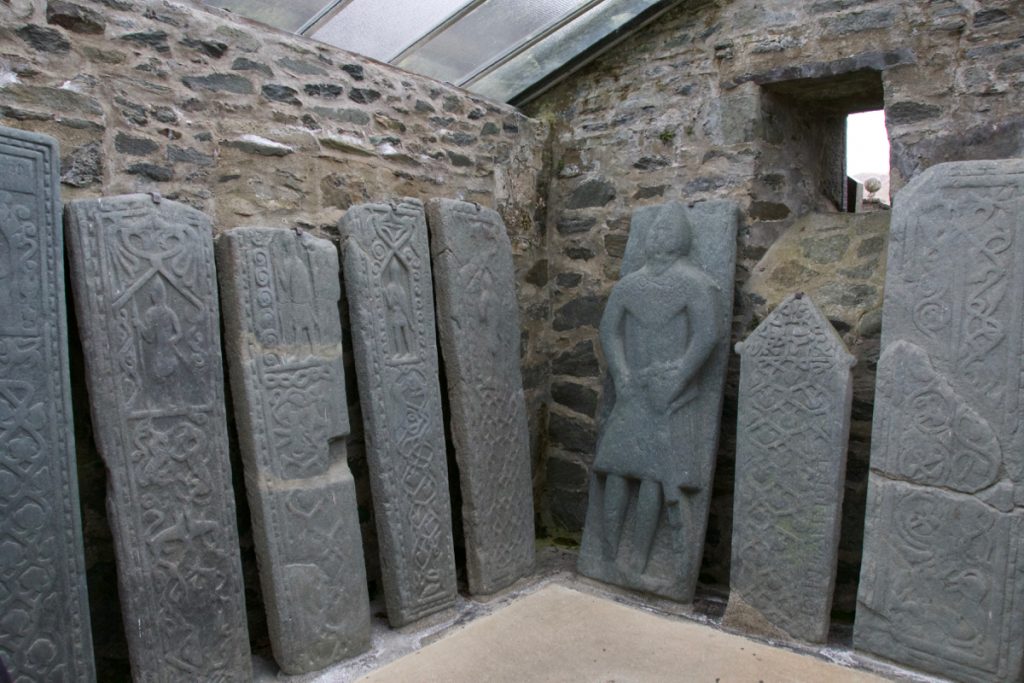 Dating from 1627, this little place was built as a mausoleum for Neil Campbell, Bishop of Argyll.  Campbell’s wife, Christiane, was the daughter of Bishop John Carswell of Carnasserie Castle, further up the glen.  Since 1956 it has been a ‘lapidarium’, where important medieval grave slabs from the surrounding graveyard have been brought under cover for protection. 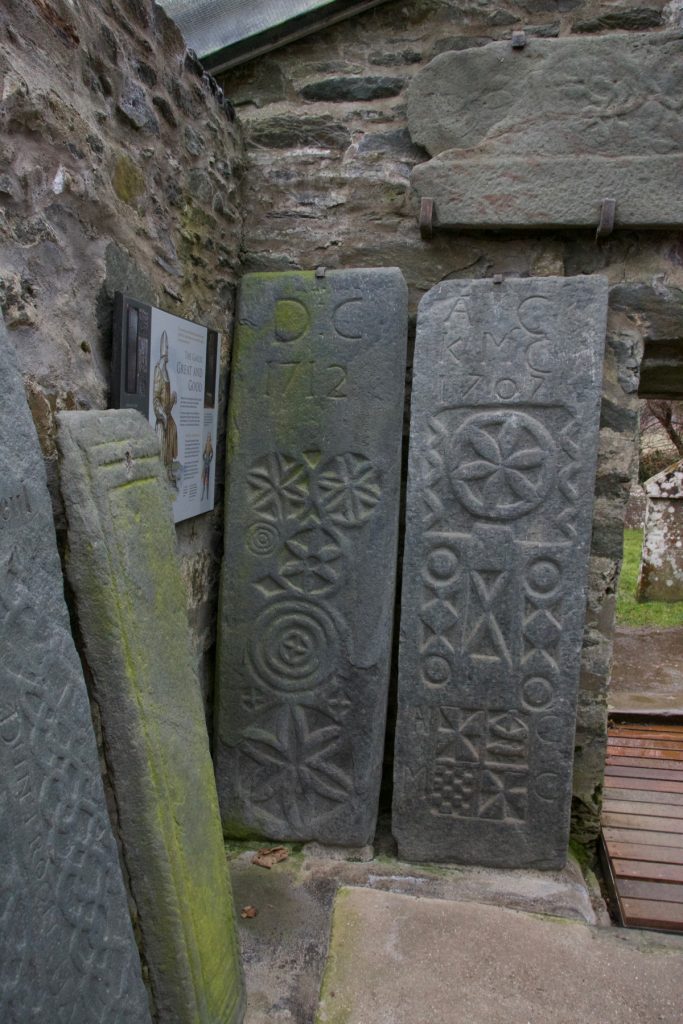 The oldest grave slabs are from the 13th century, while the most recent are inscribed with dates from the early 1700s. These latter stones bear curious geometric patterns which reminded me of crop circles.  The long stone above the door is from the side of a tomb chest. 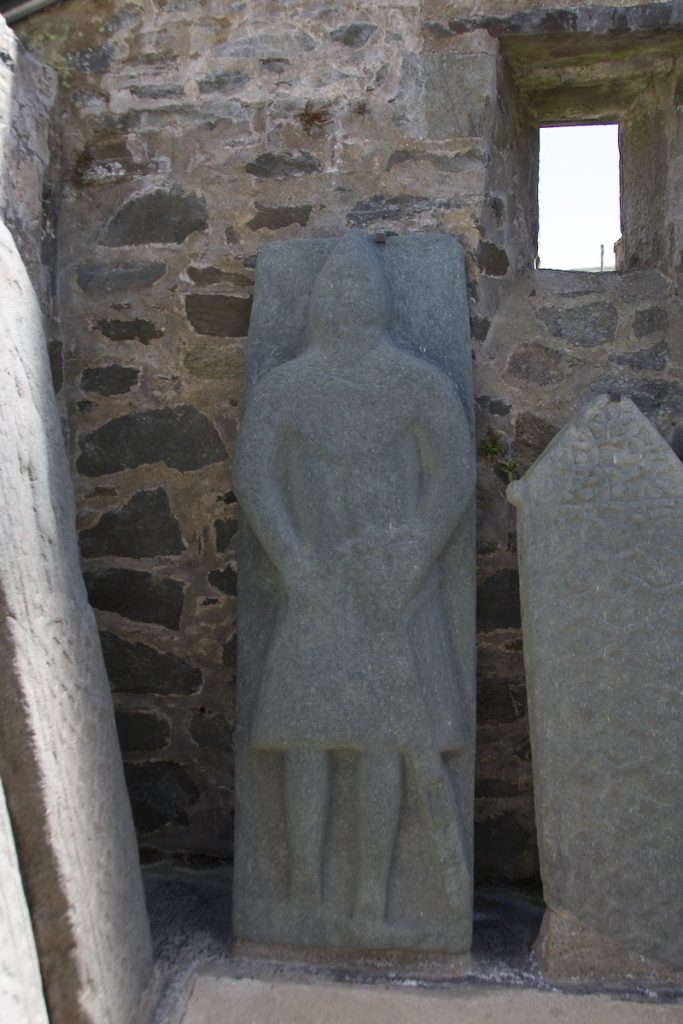 An information signs tell us that these were the stones of the great and the good – warriors, chieftains and clergymen from Kilmartin and the surrounding district. The largest effigy has been later inscribed with the name ‘McTavish’ across his chest (it doesn’t show well in my photo above, as the light was dim).  This is almost certainly a much later addition because this lettering is so much crisper than any other detail. Either the name was remembered much later and engraved for posterity, or the gravestone was ‘recycled’ for the bearer of that name.

I went down to Kilmartin again last week.  No need for shelter this time, except perhaps from the sun.  Trees of sycamore and ash cast their leafy shade over the churchyard, where the grass was turning brown after weeks of drought.  Next door, the Museum cafe was busy, and a few visitors had come to walk quietly among the graves.

Having examined the fabulous carvings again, I took time to look at a few of the more recent headstones, and then stood and gazed south down Kilmartin Glen. Benign fluffy clouds floated serenely overhead. In the distance, cows and their calves meandered around one of the cairns in the linear cemetery. It was a morning to be lazy, to let your thoughts drift like thistledown. 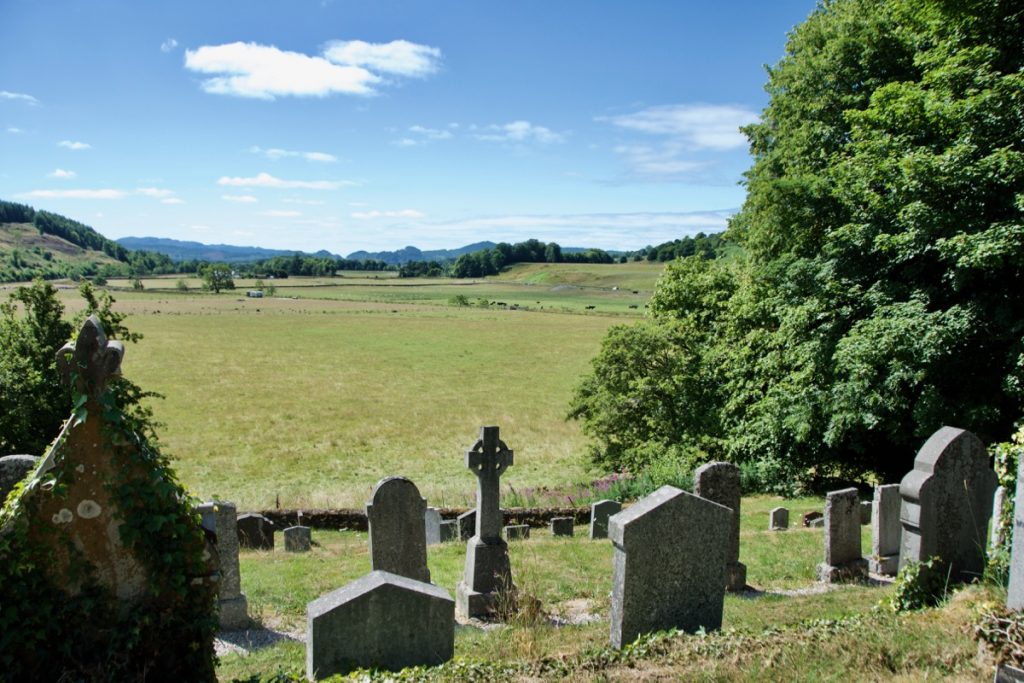 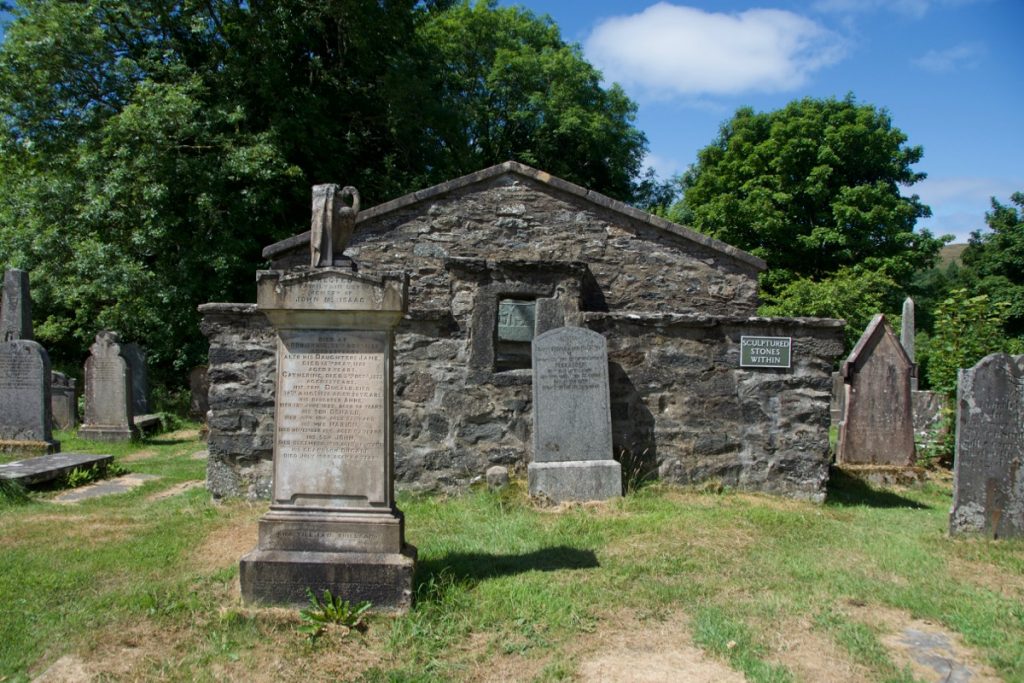 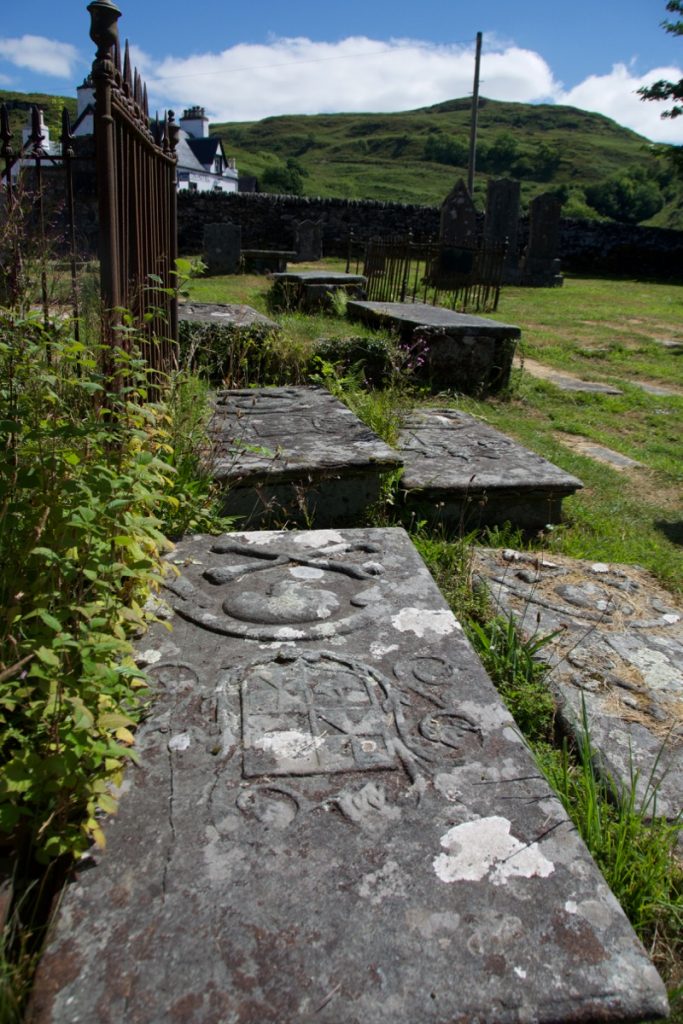 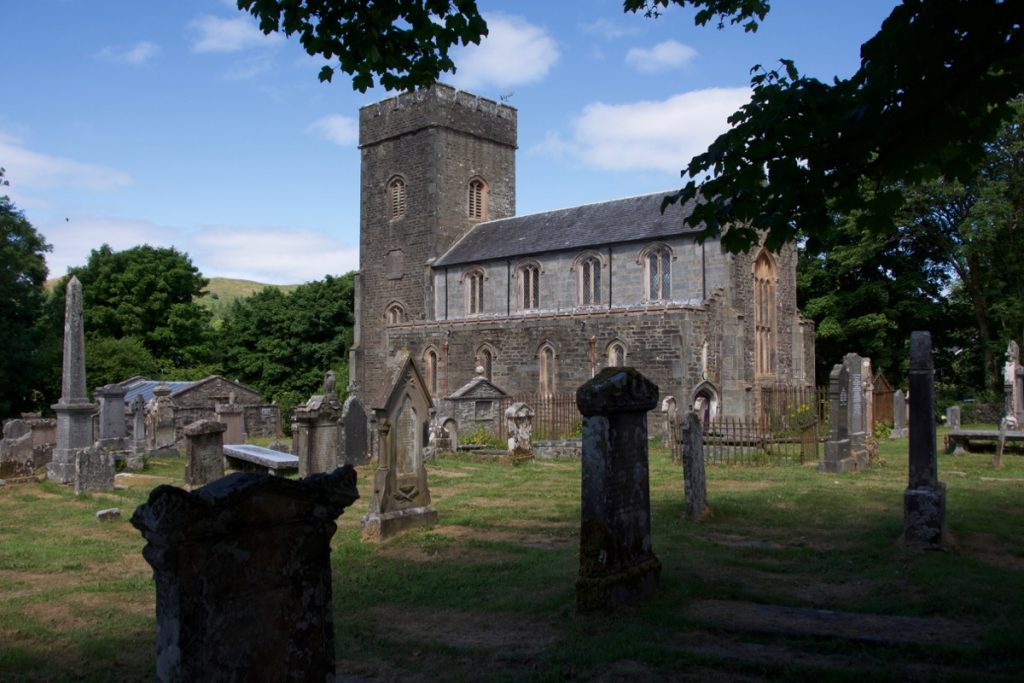 Kilmartin Church was built in 1834, but it stands on the site of a succession of older churches, the earliest of which may have been founded by one of the first missionary-saints from Ireland. According to the website Saints in Scottish Place-names, the name ‘Kilmartin’, meaning literally ‘the church or cell of St Martin’, is derived from St Martin of Tours, a fourth-century saint who lived before the arrival of Christianity in western Scotland.  However, his teachings were known to St Columba, who commemorated him during Mass on Iona. 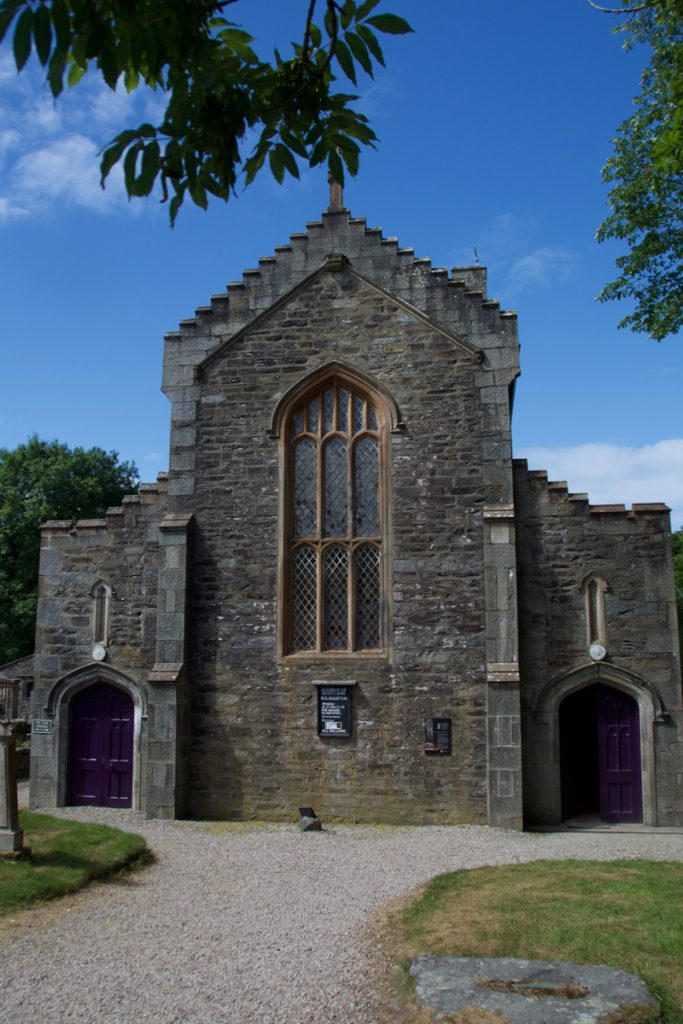 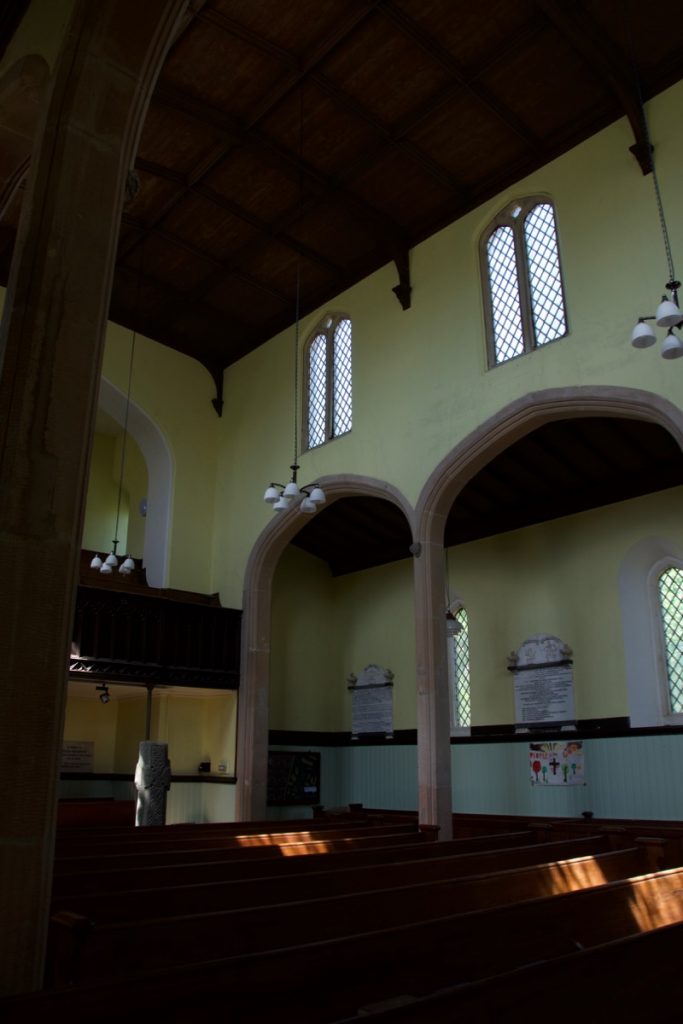 In the almost unimaginably ancient landscape of Kilmartin Glen, whose oldest monuments may date back 6,000 years, the coming of Christianity appears relatively recent.  Two medieval crosses are preserved inside the cool interior of Kilmartin Church, where slanting shafts of sunlight throw their intricate carvings into sharp relief.

The Kilmartin Cross, dating from around 900 AD, was found in the graveyard in 1870; at some time in its long history, it is believed that one of its arms broke off and the other side was adjusted and decorated to match the new shape. 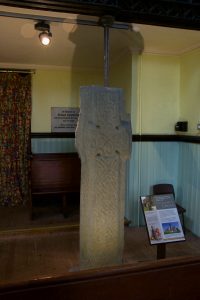 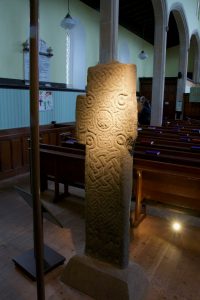 The other cross is more dramatic. Dating from about 1200, and described as “one of the most magnificent medieval stone crosses in the west Highlands”, it depicts the crucifixion on one face and the robed figure of Christ on the other. It survives in three fragments, and the right arm is missing, but it still has a striking presence. 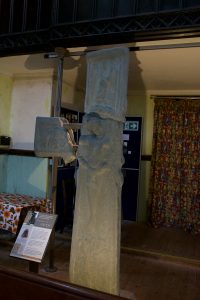 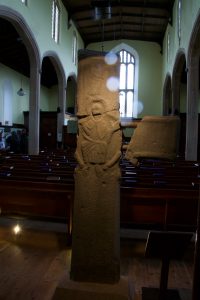 Kilmartin Museum is next door, and well worth a visit.