If you’ve been following my blog for a long time, you may remember that in 2014 I wrote about a tiny but intriguing graveyard near Callander, at the southern end of Loch Lubnaig.   A chapel once stood here, dedicated to St Bride; I’ve recently learned that there may have been a small nunnery close by, under the care of the 13th century Priory on Inchmahome Island in the Lake of Menteith. 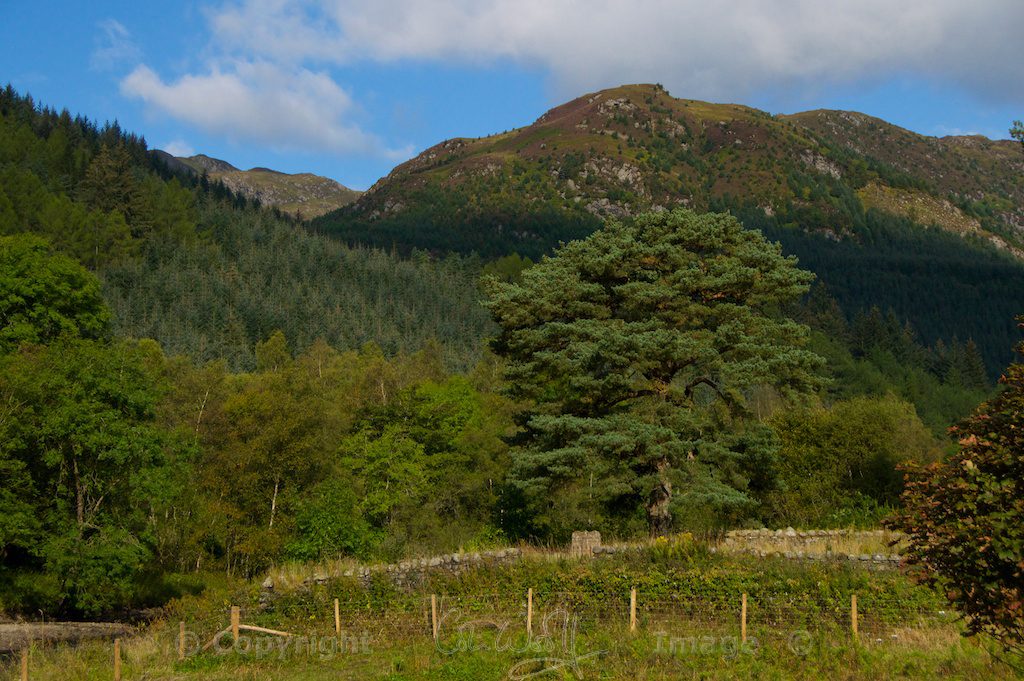 St Bride’s is the setting for a dramatic wedding scene in Sir Walter Scott’s novel, ‘The Lady of the Lake’: a newly-married bride and groom emerge from the chapel, to be greeted with the ominous appearance of the ‘Fiery Cross’, a burning brand carried across the countryside from clan to clan, inciting all able-bodied men to rise in battle.

The graveyard is a traditional burial ground for one particular family – the McKinlays of nearby Annie Farm. When I published my original blog post, I was delighted to be contacted by a surprising number of people, mostly living in Scotland, Canada or the US, who told me that they were either directly descended from the McKinlays buried here, or related to them in some way. Moira Goodman, who is now a good friend, told me that she is descended from John McKinlay (1679-1732) and his wife Elizabeth Ferguson, both buried in St Bride’s. Moira has spent many years tracing the McKinlay family tree, and I have been able to put several people in touch with her so that they can investigate their ancestry further. 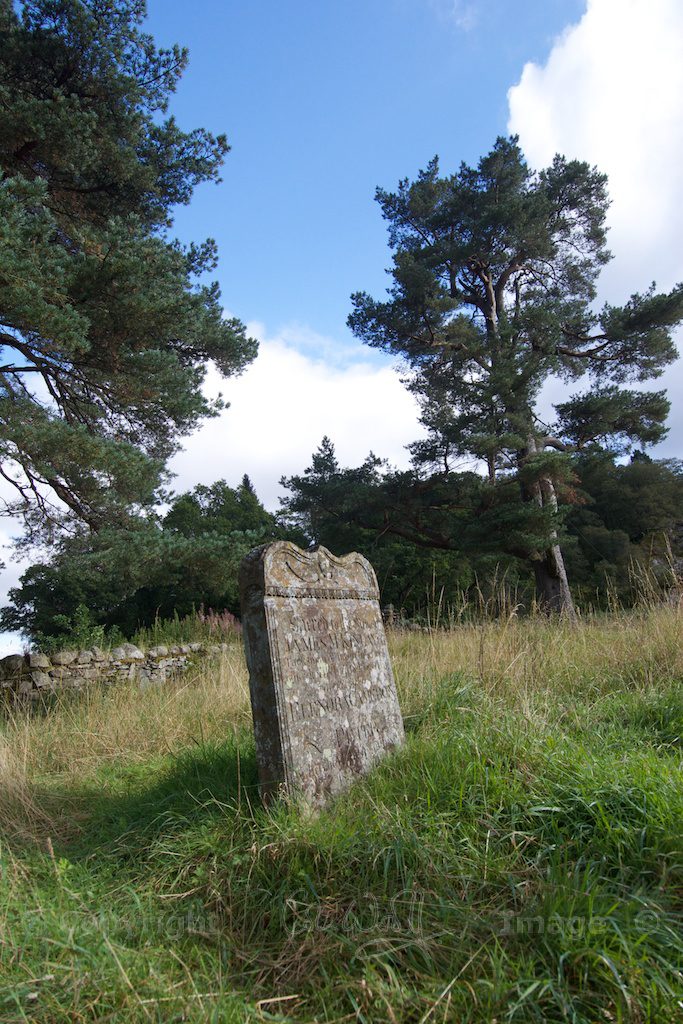 The gravestone of James McKinlay and Elenora Cameron, the only stone still standing at St Bride’s.  The inscription reads:

Sacred to the memory of James McKinlay
Tacksman at Inverchagernie
who died Feb 4th 1805 aged 65
[illegible line]
Elenora Cameron
[and their son]
Peter, who died on 4th of June
1828 aged 31

Now, it appears that St Bride’s is in urgent need of repair and restoration.

Less than 10 years ago it was still possible to make out the foundations of the chapel on the ground. In recent months, however, the graveyard has become choked with vegetation, and the boundary walls are in a worrying state of disrepair. This is of particular concern because the walls are themselves ancient, and have significant stones embedded in them. 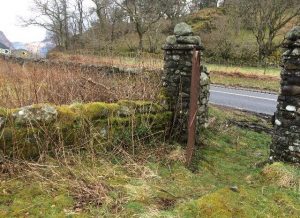 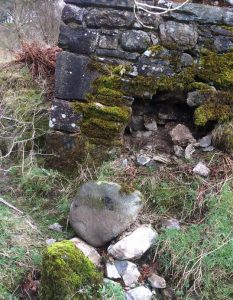 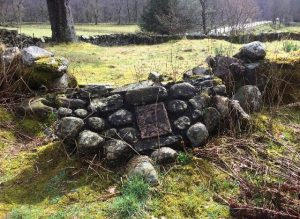 A proposal for the restoration of St Bride’s is currently under discussion. I have been contacted by Sue Mackay of the Callander Heritage Society, who is putting together an application for the archaeological survey and repair of St Bride’s and four neighbouring graveyards of a similar age: Kilmahog, Leny, St Kessog’s and Brig o’Turk. (If your name is Buchanan, you may be interested to know that the graveyard at Leny was a traditional burial ground for a branch of the Buchanan family).

Each graveyard has its own particular requirements, and the project is still in the planning and funding stage. St Bride’s is one of the smallest and most family-specific sites, and one of the aims of the project would be to sensitively restore and record the ‘lost’ graves for the benefit of future generations. Your support is therefore warmly invited – whether you are descended from the McKinlays, or whether you would simply like to help save a small but fascinating part of this ancient landscape. 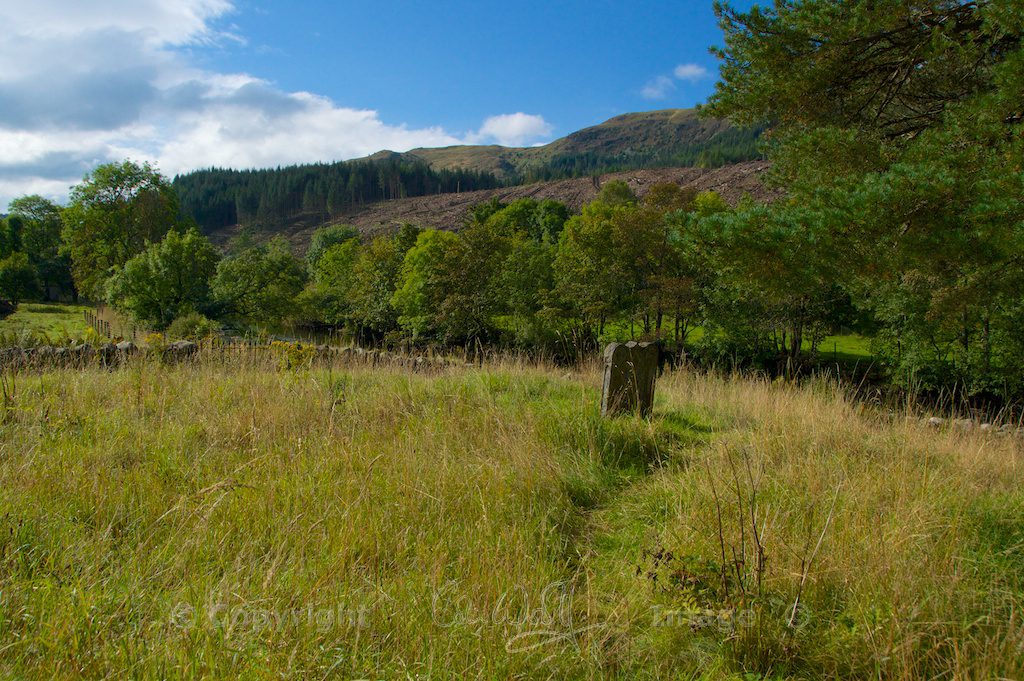 For more information on how you could lend your support to St Bride’s, please contact Sue Mackay by email: callanderheritage@gmail.com   Alternatively, you can visit the Callander Heritage Society’s Facebook page and make contact in that way. I know that Sue will be delighted to hear from you, as she is passionate about the history of these sites.

Practical help: While the applications are being processed, a team of dedicated volunteers meet regularly and are making an ongoing effort to keep the deterioration under control. Please contact Sue if you’d like to lend a hand.

Thank you in advance for your interest!

This photo is thought to have been taken in 1932, following earlier restoration work at St Bride’s.   You can see the chapel floor quite clearly.  (Courtesy of Callander Heritage Society) 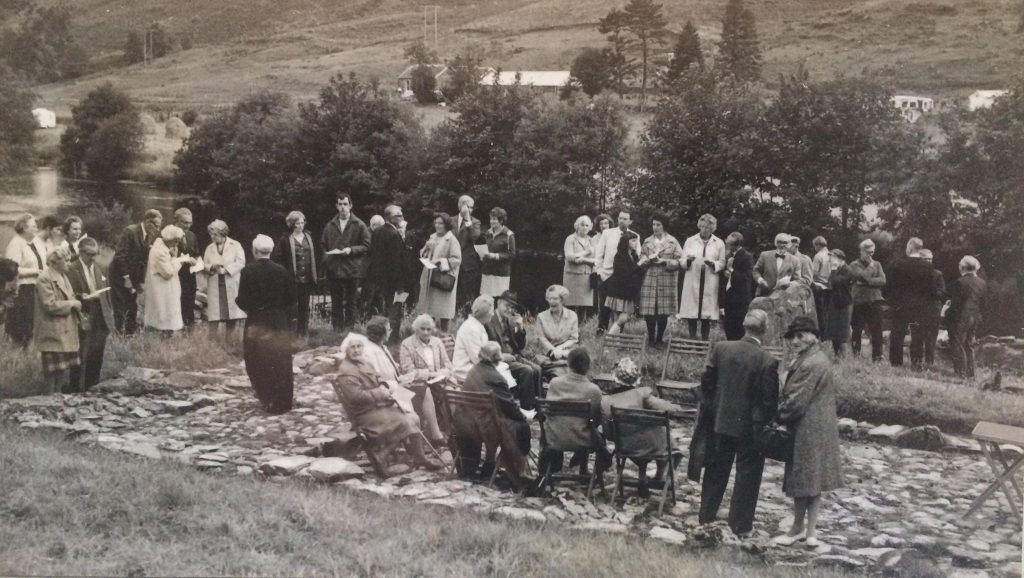 Further reading on The Hazel Tree: