If you’ve been following my blog for a long time, you may remember that about four years ago (is it really that long?) I wrote about Glen Lonan and the long-held tradition that it was known as ‘the Road of the Kings’.

The Road of the Kings… and the Rock of the Dead

From the ninth to the eleventh centuries it is believed that most of Scotland’s kings were buried on Iona, the sacred isle of St Columba. Royal funeral processions would have travelled west, from (for example) Forteviot in Perthshire. Passing down Glen Lonan, it’s likely that the cortege would then have turned south towards Loch Nell and Kilmore, which lies at the head of Loch Feochan.

On the shore of Loch Feochan is a rock known as Carraig nam Marbh, ‘the Rock of the Dead’.   Here, so it is said, the King’s body was placed in a galley and taken across the Firth of Lorn, around the southern part of Mull and finally to Iona.

Until just recently, I had a fairly good idea where Carraig nam Marbh might be, but I had not tried to locate it. A week or so ago I decided it was time to go and have a proper look.

There’s only a brief mention of the site in the Canmore database, but the accompanying map appears to show it quite precisely as an outcrop of rock on the south side of the loch, just below the turn-off to Kilninver.

We waited for a low tide, and then walked down to the shore from the roadside, picking our way carefully over barnacle-covered rocks and stepping across a burn that was bubbling out to sea. It was a clear, crisp morning and in places the seaweed was still crunchy with frost. Lovely things caught our eye – the texture of driftwood, pearlescent mussel shells, pussy willows. 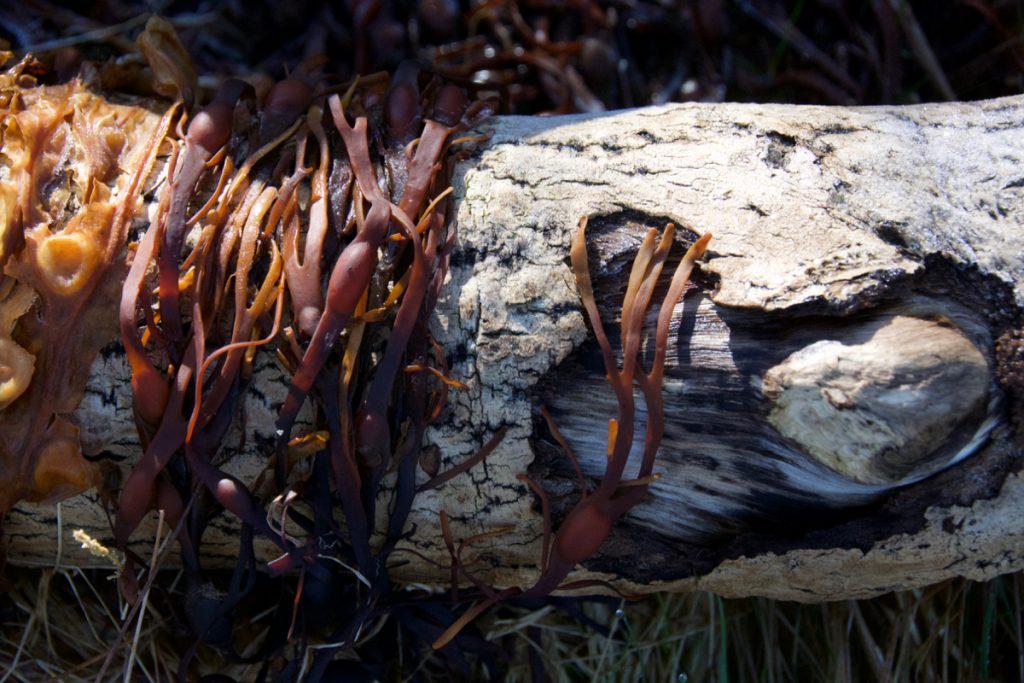 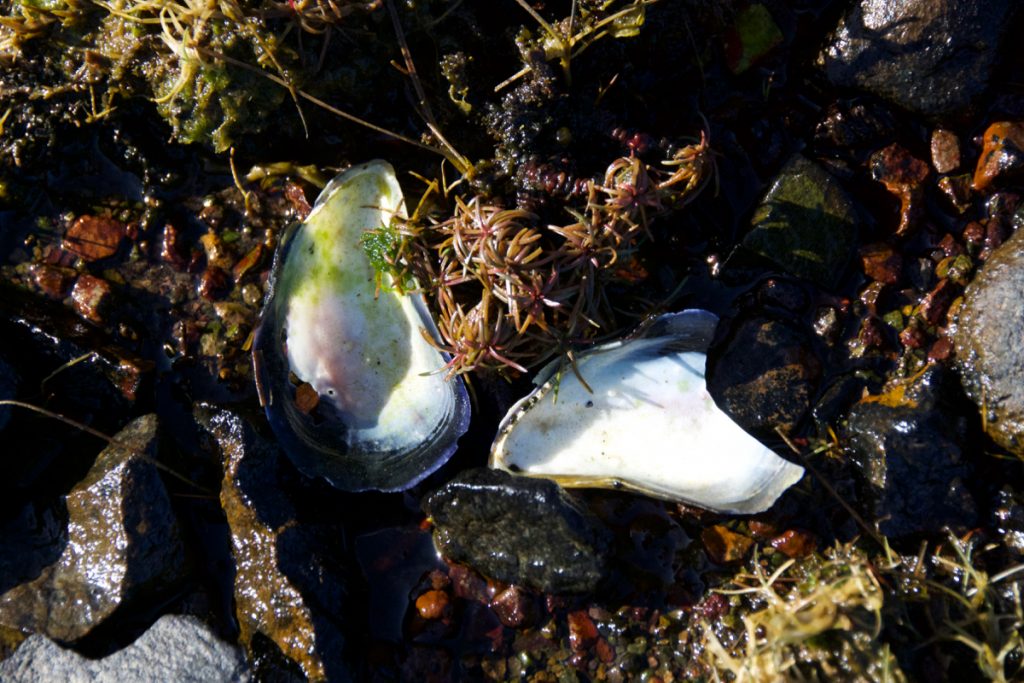 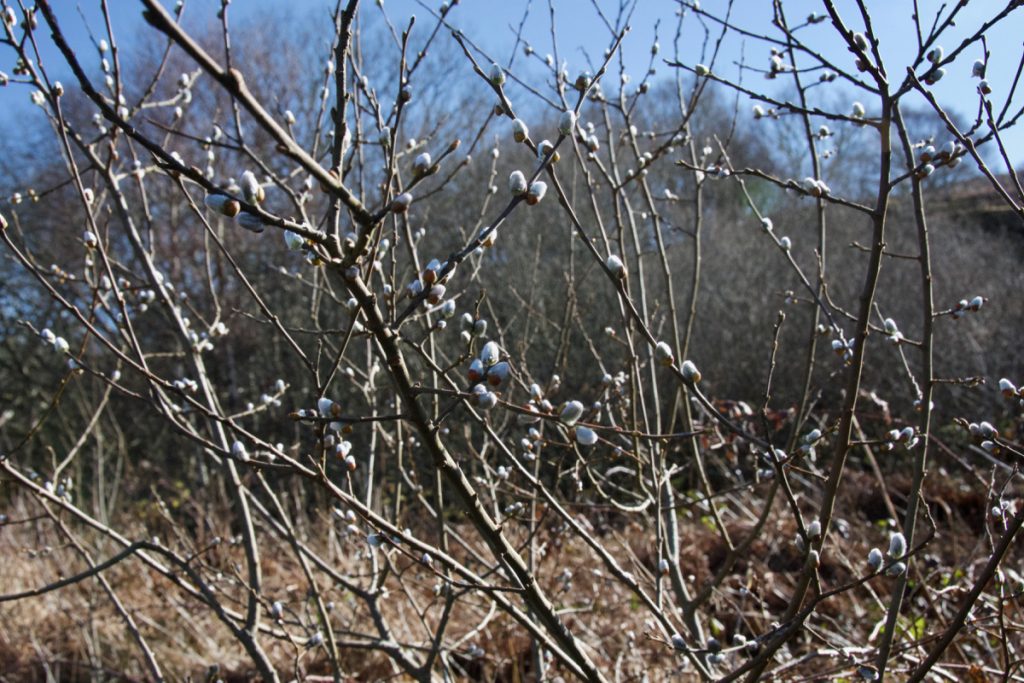 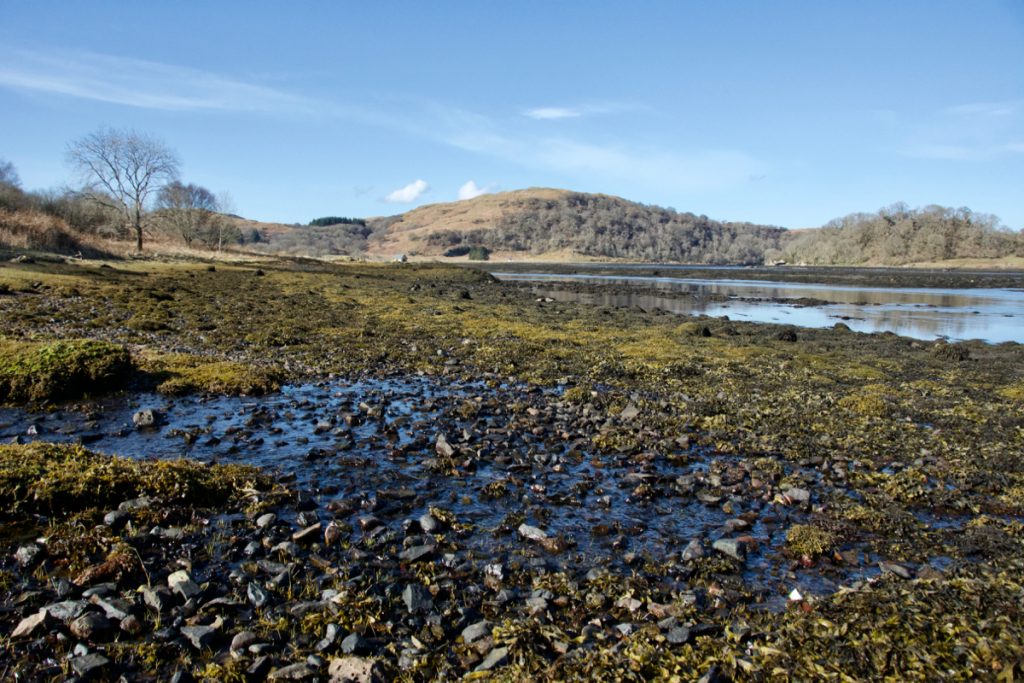 Where was Carraig nam Marbh? An obvious candidate was a flat-topped lump of black basalt projecting out into the water, its surface pitted with shallow rock pools which contained thousands of broken shells. It is probably washed, but not completely covered, at high tide, and its relative prominence gives it a sweeping view up and down the loch. According to the map, the small tidal island nearby is called ‘Carn Alpein’ which has a fascinating echo in ‘Ailpein’ and ‘MacAlpin’, the family name of early kings. 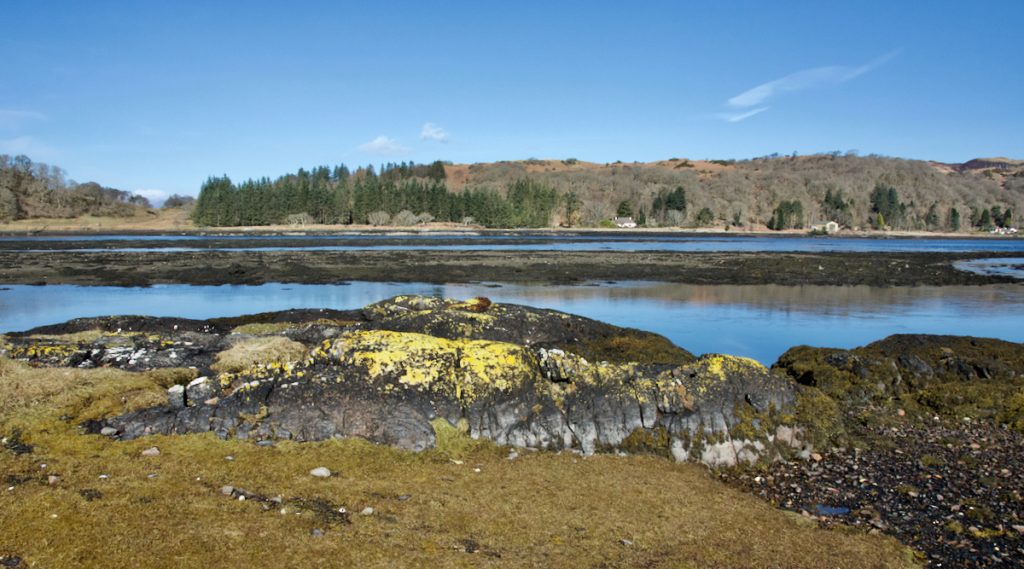 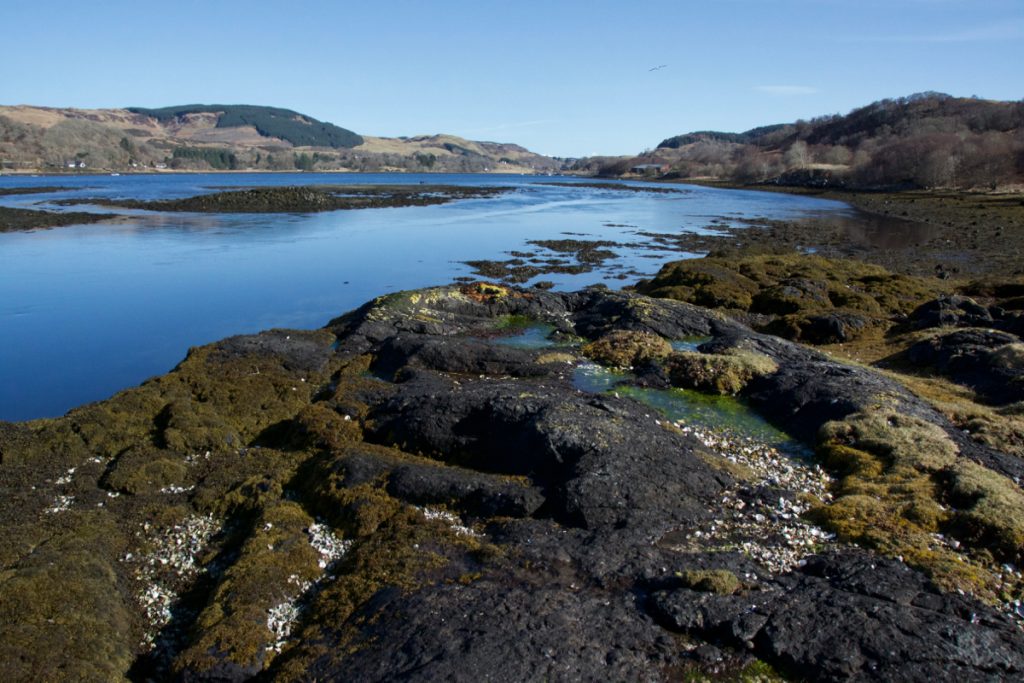 I don’t know for sure whether the exact rock we stood on is Carraig nam Marbh, but what I do know is that the view across to Mull is mesmerising. As the galley pulled away from the shore, it would have turned slowly north-west around Ardentallen Point, the tip of the peninsula suddenly giving way to a wide expanse of sea with mountains beyond – veiled in cloud, perhaps, or white with snow, or gilded with morning sunlight. Across the Firth of Lorn, you can imagine the rhythmic dipping of oars and the sails slowly filling with wind. 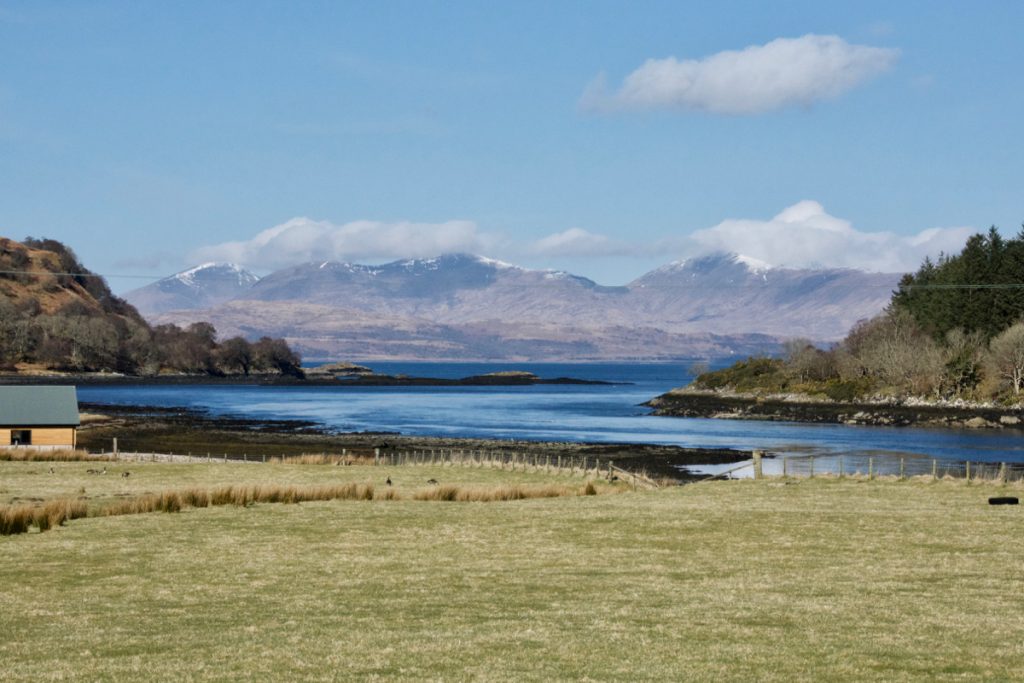 About a hundred yards away, as I stopped to photograph the view out to Mull, I found myself automatically framing the photo to include a roadside tree. Then I noticed the tree itself. It was an elder. Another elder! I remembered the one that puzzled me at Temple Wood, and had to laugh at myself. The ‘mother goddess’ tree, associated with death and regeneration, deep Earth wisdom, and protection against evil. It was growing beside a moss-covered wall, its flowers still tightly in bud, leaves just starting to emerge. Spirit of place? How could anything else be growing in this spot! 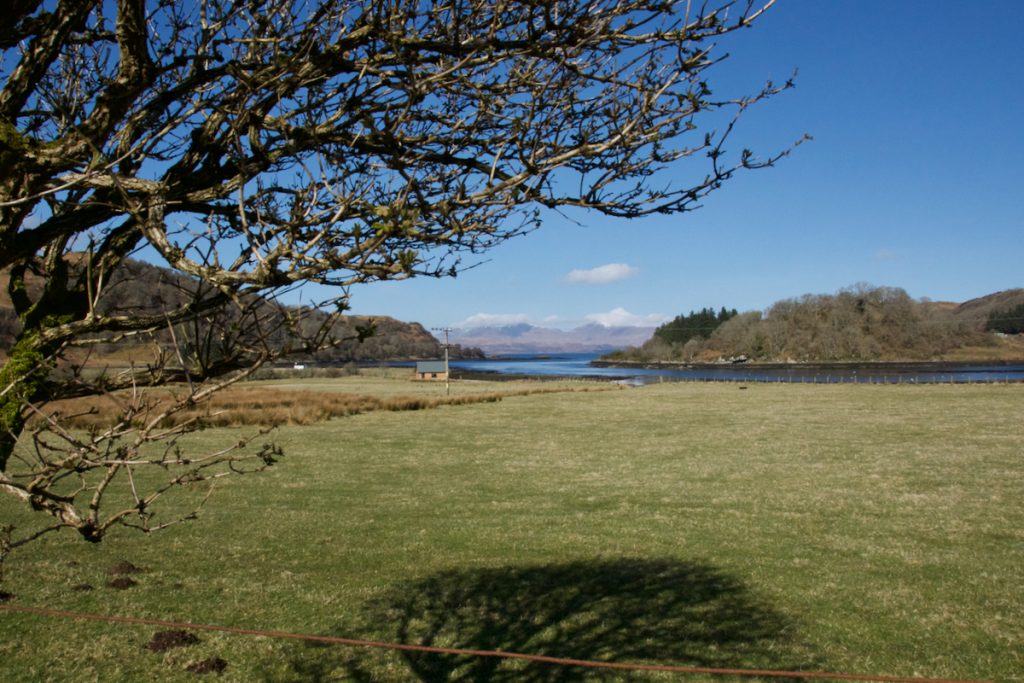 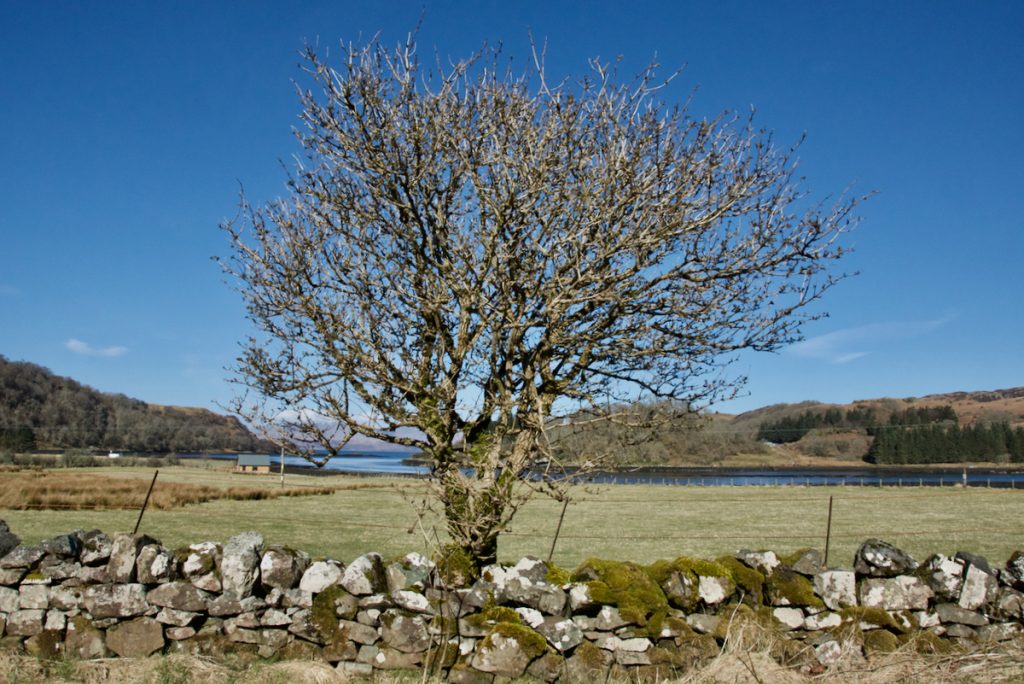 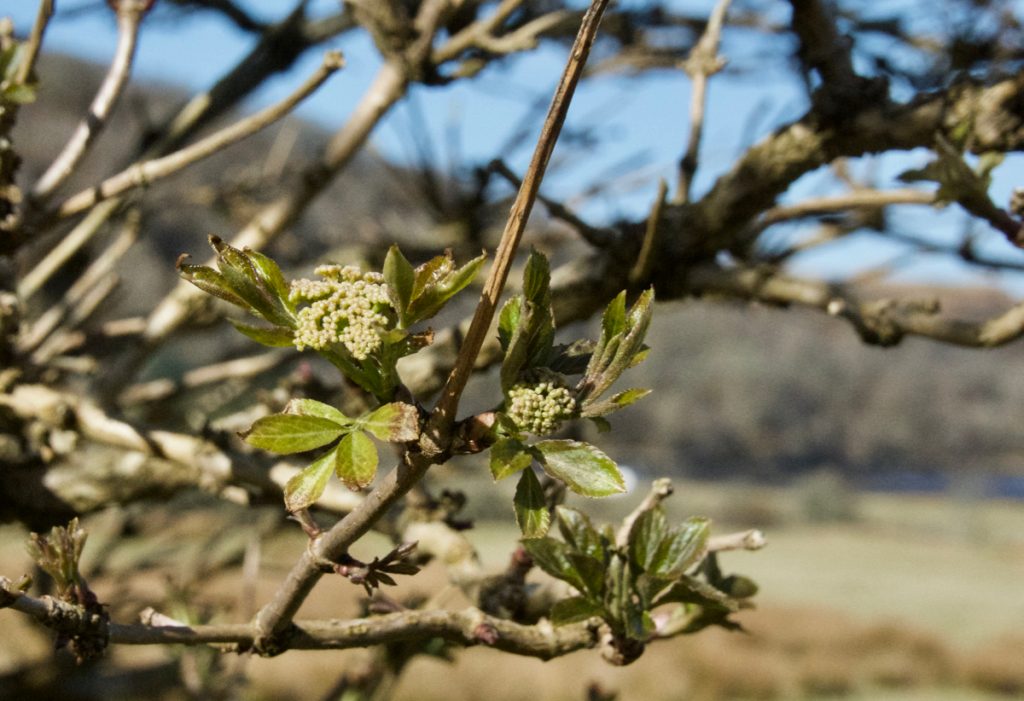