We came across Clava Cairns as the sun sank in the winter sky, glinting through the branches and leaving deep shadowy hollows still thick with frost from the night before.

It’s a place that you have to seek out, taking a few turns down narrow country roads, past fields and woods until a long stone wall and a brown road sign tell you that you’re there.

Pulling into the small car park alongside, you’re still not really aware of the place until you step out from the trees and into the grassy area that they seem to be so intently guarding.  Then you see them:  three wide circular mounds topped with rounded cobbles, each one apparently surrounded by its own ring of standing stones. 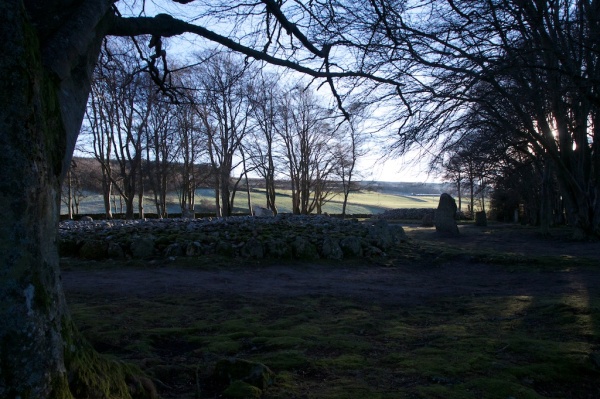 Long shadows radiated like fingers, blurring the edge between reality and  imagination.  Sunlight caught random patches of moss and stone, while on the lee side all was in darkness.   For a few seconds I felt like an intruder.  Then I remembered the feeling that these places so often bring:  a kind of untouchability combined with familiarity, a sense of both mystery and reassurance.

The Clava Cairns, or more specifically Balnaruan of Clava which is the name of this particular site, were built about 4,000 years ago.  Two are passage graves and the third is a ring cairn, which has no apparent path to the central chamber.  Just to one side is a fourth site, the remains of a kerb cairn.

The two passage graves are aligned north-east to south-west, and their entrances are positioned so that light from the setting sun would shine down them on the shortest day of the year.   The internal chambers would once have been completely covered with a corbelled roof, rising to a height of four metres. 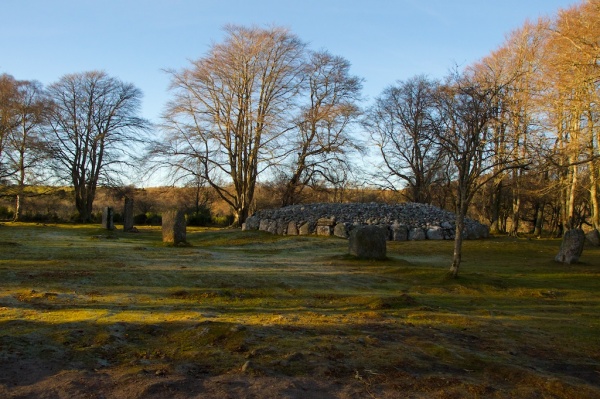 Historic Scotland reports that the stones chosen to build the north-east grave were graded by height and also by colour:  those which would have been lit by the midwinter sunset are deep red sandstone, while those chosen to face the sunrise are paler, sometimes with quartz crystals.  This is no longer obvious unless you’re a keen geologist, because of the liberal coating of lichen.

I stood inside the north-east chamber and faced the sun:  the effect was surprisingly warm, and there was a feeling of being insulated from all outside noise.  It was quite womb-like.  Once again, I wonder if these places were constructed for the purpose of sound as well as light. 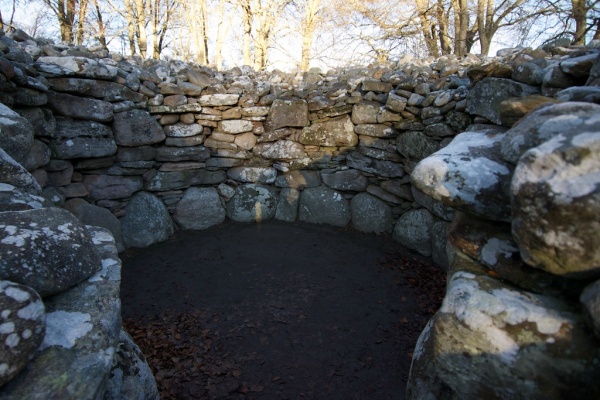 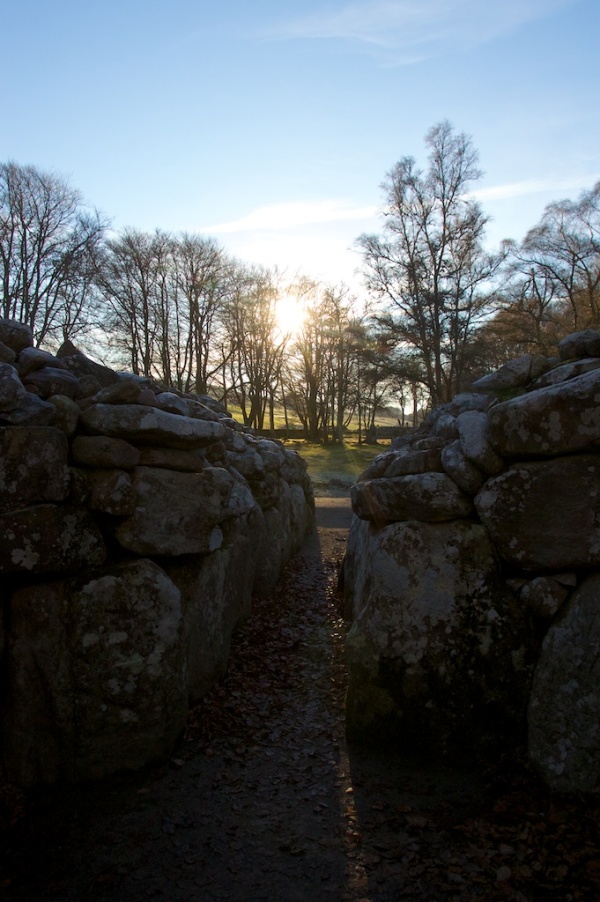 Historians believe that both passage graves may have been sealed a few years after completion, with the addition of low rubble platforms running around the perimeter of each.  Archaeological finds outside the north-east grave include cremated bone and seashells, leading to speculation about possible rituals.  Stone circles were also erected around each grave, as if to protect them.

The ring cairn, which stands between the two passage graves but slightly offset from the midwinter alignment, is thought to have had a different purpose.  It has no entrance, and it was never roofed.  As you walk around it, you can see three or four short lines of rubble extending outwards from the perimeter of the mound, giving a sunray effect.  Individual upright stones in the surrounding stone circle mark the termination of these rays.  The study of similar sites in Aberdeenshire has led experts to believe that fires may have been lit inside the cairn, for purposes which we can only imagine.

Ring cairn, with one of the ‘rays’

No human remains have been recorded inside either of the passage graves.  They may have been lost in comparatively recent times:  in the 19th century, amateur archaeologists were fascinated by sites like these but they lacked the means to preserve fragile remains once they had been exposed to the elements.  A Victorian landowner planted trees around the site to enhance its atmosphere, and some of the cairn stones were used to build the adjoining wall. 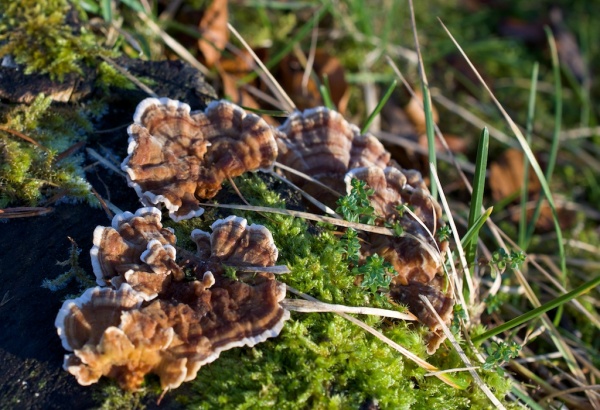 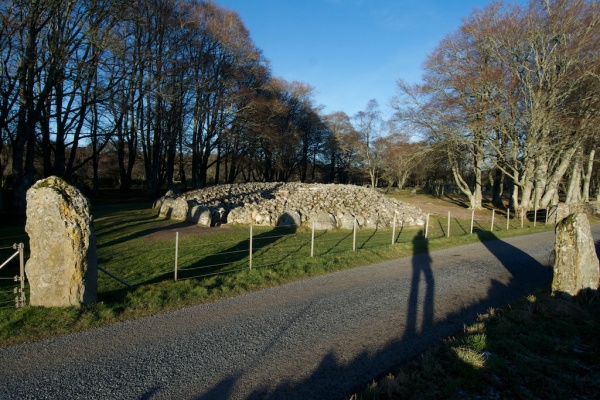 Despite this well-meaning but misguided interference, radiocarbon dating has still given a fascinating glimpse into the purpose of Clava Cairns in the Bronze Age, and its interpretation extends to the wider landscape of Inverness and the Moray Firth, where the remains of about 50 similar cairns have been found.

It is clear that Balnaruan of Clava was venerated long after its original builders had disappeared, and re-visited at regular intervals throughout history.  The kerb cairn was added a thousand years later, and a Pictish cremation was found by the ring cairn.  Nearby, at Milton of Clava, the remains of medieval chapel stand next to another cairn. 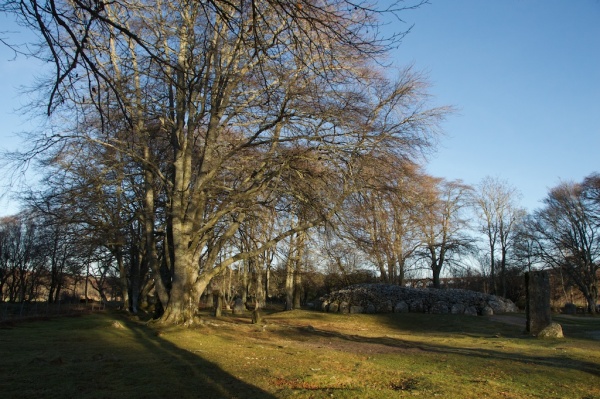 The beech trees add a lovely flowing element as they encircle the site, many of them extending their longest branches inwards as if to brush the stones.  As a result, Clava Cairns feels softly shrouded, even at a leafless time of year.  It’s a gentle place, one step removed from this world, its pulse beating to a rhythm much slower than our own.

The Clava Cairns are open all year round, and admission is free.  To find them, visit the website of Historic Environment Scotland. 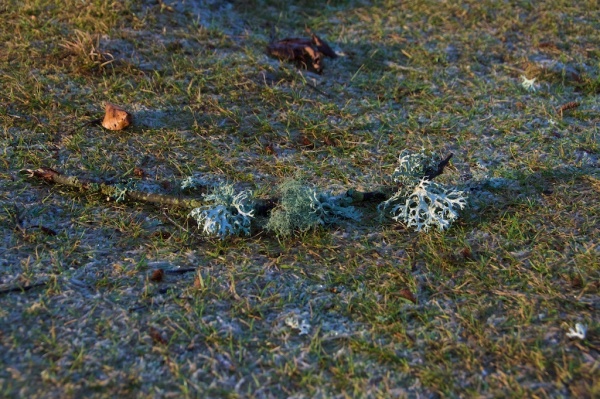