It’s not often that a tree steals the show at a majestic place like Melrose Abbey, but that’s what happened last October when we ventured down to the Scottish Borders.

There it was, grabbing our attention the minute we stepped inside the grounds – a large spreading prunus in full autumn splendour, dripping gold onto the grass and glowing as if it was lit from within.   I decided that the only option was to stand beneath it, so that I could take in the beauty of the tree and the magnificence of the Abbey church at the same time. 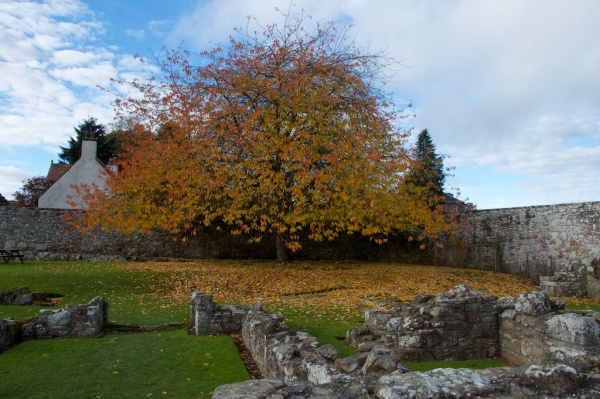 The very name of Melrose Abbey seems to suggest elegance and majesty, and that is exactly the impression it gives in real life, as you gaze up in wonder at the soaring arches and the delicate tracery of the windows.  There’s something impossibly romantic about a ruined abbey, although I’m sure that the monks didn’t share this view in 1296 and on repeated occasions for the next 250 years thereafter, when English armies poured across the border bent on raiding and destruction.

It all started peacefully enough around 650 AD, when a group of monks from Iona were invited by St Aidan of Lindisfarne to establish a monastery by the River Tweed, on a spot not far from the present church.  When St Aidan died in 651, a humble shepherd named Cuthbert had a divine vision as he tended his flocks on the Lammermuir hills, and he was inspired to devote his life to worship, eventually becoming the Prior of Old Melrose before moving to Lindisfarne in 664.  As St Cuthbert, one of the best known early saints, his remarkable legacy is still remembered.

200 years later, the first monastery at Old Melrose was destroyed by the Scots, and nothing now remains of it except some fairly indistinct earthworks on the bank of the river.  But David I, the godfather of so many Scottish abbeys, saw the potential for new development, and in 1136 he invited the Abbot of Rievaulx Abbey in Yorkshire to send a party of 13 holy men (an abbot and 12 monks, representing Christ and his disciples) to Melrose, where they established Scotland’s first Cistercian monastery on the present site.   David endowed the Abbey with lands and encouraged other noblemen to do the same.  In this way, Melrose quickly became wealthy, despite the studiously spartan lifestyle of its residents.

The original abbey church was relatively simple in design, but not much survives from this first building:  one of the most visible fragments is the lower part of the west door. 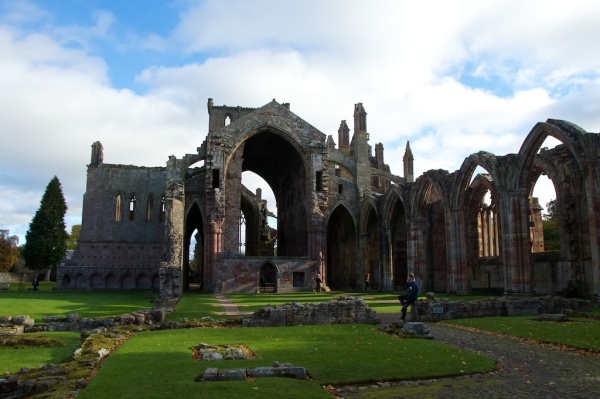 Ruined west wall and entrance (where the person is sitting);  nave beyond, with surviving part of a stone screen or pulpitum

Peace reigned for the next 150 years or so, and let’s hope the monks made the most of it, because none of them got much sleep after the 14th century had dawned over southern Scotland.   The root cause of this was Edward I of England, never one to rest easy in his bed while there was some pillaging to be done, and the fact that some rich monasteries lay in his chosen path just made it all the more exciting.  He declared war on Scotland, and the very land that Melrose was built on became disputed territory as the two angry nations pushed each other repeatedly north and south across an invisible borderline.

Melrose and Robert the Bruce

After Edward’s death his son, Edward II, took over where he left off, and after one of his fierce attacks on Melrose the repairs were paid for by the Scottish king, Robert the Bruce.  The Bruce had such an affinity for Melrose that he issued a special order:  when he died, his heart was to be removed and taken on Crusade by his good friend Sir James Douglas before being brought back to Melrose for burial.  Douglas was as good as his word.  In 1330, at the Battle of Teba in southern Spain, he rode forward into battle and threw the casket containing the heart of the Bruce before him, with the cry “Go first as thou hast always done!”   But Douglas was killed in the fighting, and it was down to another loyal follower, Sir William Keith of Galston, to retrieve the casket from the battlefield and bring it back to Melrose.

Just out of interest, Robert the Bruce’s body is buried in Dunfermline Abbey, another magnificent monastery which he helped to restore after the English attacks.

In 1385 another English king arrived on the scene, hell-bent on destruction.   This time it was Richard II.   By the time he had finished, the monasteries of Melrose, Dryburgh and Newbattle were smoking ruins.  Unbelievably, it was Richard who began the restoration work, as if he hadn’t caused all the trouble in the first place.  According to architectural sources, the engagement of English masons in the early stages is evident from the perpendicular tracery of the great east window.  But at some stage as the work progressed, the design took on a more European influence, and if you study the window in the south transept, you can begin to see the difference.

South transept (centre) with the presbytery to the right

The re-building work continued throughout the 15th and into the 16th century, using mellow pink sandstone quarried from the Eildon Hills.  It was obviously a labour of love, and some fabulous details still remain in the form of curious gargoyles and grotesques.  By the time of James IV the land of Melrose had passed once again to Scotland, as the king is known to have distributed ‘drink-silver’ in 1502 and 1504 to the masons working there.

Melrose must have been an awe-inspiring sight to behold, towering well above any other man-made structures in the surrounding landscape, but the time to enjoy it was cut short once again by violence and greed.  In 1542, when James V died and his baby daughter Mary came to the throne, Henry VIII of England decided that there could be no better bride for his young son, Edward, than the infant Queen of Scots.

Understandably, the Scots differed in their opinion, and so Henry embarked on the ‘rough wooing’, a campaign of hostility and destruction north of the border, in an attempt to get his own way.   In 1544 his forces set fire to Melrose Abbey.   The monks, whose numbers had been dwindling anyway, stayed on a little longer, and when the Reformation threatened their precarious existence in 1560 they showed a surprising degree of flexibility by converting themselves to the Protestant religion in order to keep their home.  But the Abbey was crumbling around them and nothing much could be done.  In 1610 part of the choir was converted for parochial worship, and a small belfry was added to the south transept gable.  But even this practice was abandoned when a new kirk was erected elsewhere. 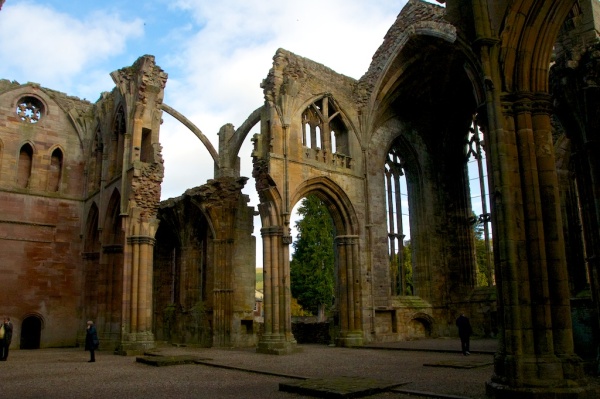 Presbytery (and ceiling, below)

We walked around the interior of the Abbey church, peering up at the ornate ceiling of the presbytery and trekking up the narrow winding stair to the second storey, where you emerge onto a railed walkway.  If you can stop yourself leaning over and staring down, which does you no good, you can enjoy breathtaking views of the town of Melrose with the low Border hills behind. 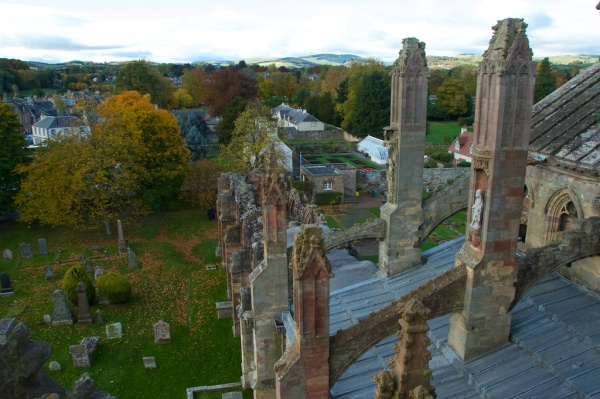 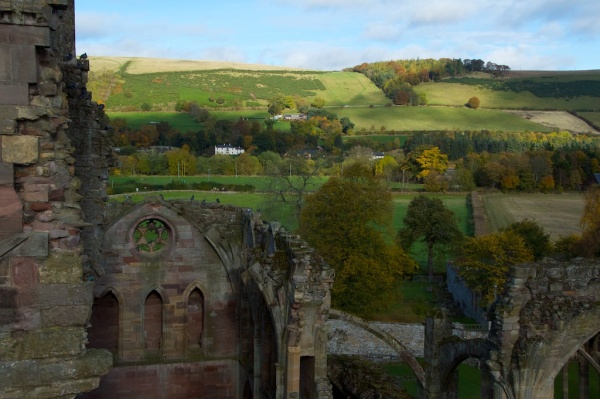 A stone’s throw to the north of the refectory (or what remains of it) is the Commendator’s House.  The last occupant of this splendid building was James Douglas, the Abbey’s last commendator, in 1590.  The commendator’s job was to oversee the financial affairs of an abbey, and by the 16th century these office bearers, often appointed by the king, had supplanted abbots in many wealthy houses.  The building stands close to the foundations of the older Abbot’s Hall, and beyond it a bridge crosses the mill lade, a spur of the River Tweed that was diverted to power the Abbey’s mills.

The Commendator’s House is now a museum, showcasing a vast display of artefacts and relics from the Abbey and its grounds including some beautiful examples of pottery and glass.  Light pours in through the tall windows and you feel that it would have been a glorious residence in former times.

Having visited four of the Border abbeys now – Dryburgh, Kelso, Jedburgh and Melrose – I am hard pushed to say which I love most.  Dryburgh has the most romantic feel, while Jedburgh is proud and defiant.  Kelso is quite stark and hollow, although I might just have happened on it during bad weather!  Melrose still has an air of affluence, highlighted beautifully by the carpet of autumn gold.  A charming place to explore, and I can recommend a visit to two lovely gardens as well:  Harmony and Priorwood, both maintained by the National Trust for Scotland.