Concluding my two-part feature about Dunfermline Abbey and Palace 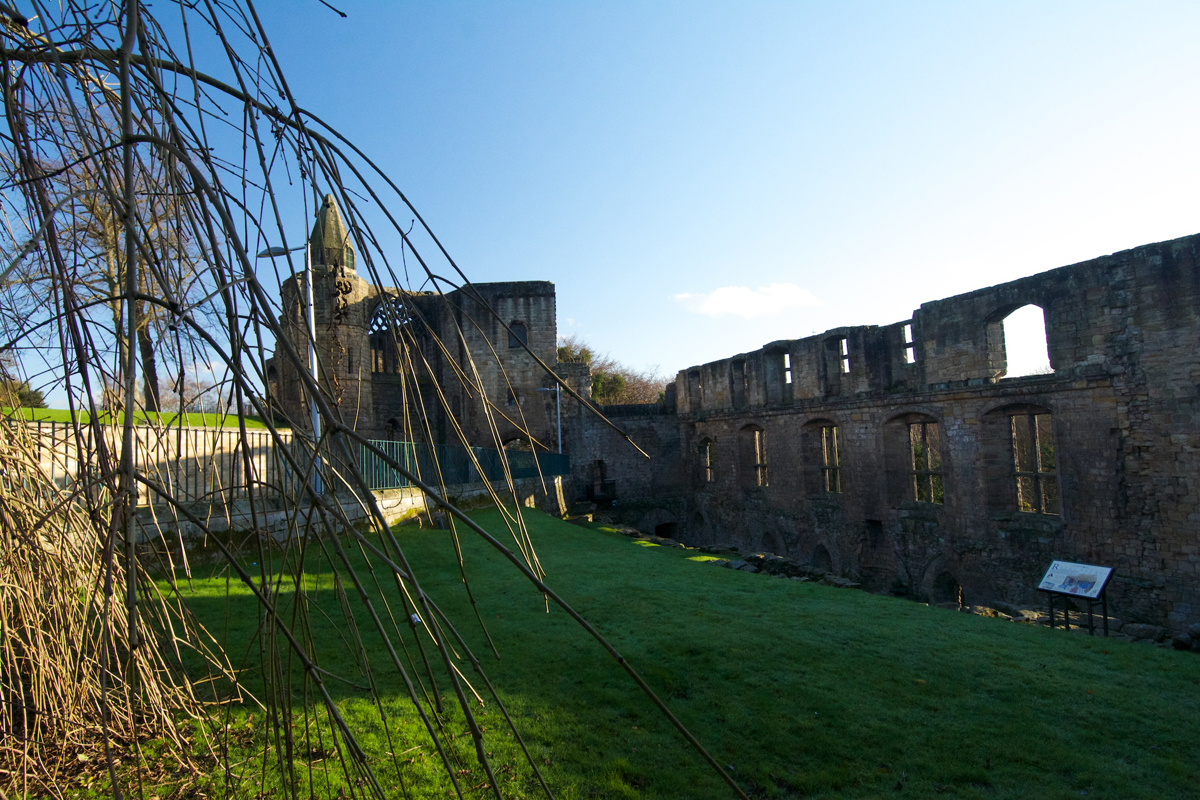 “The King sits in Dunfermline town,
Drinking the blude-red wine…”

I can remember reading these lines when I was just a kid, and wondering where on earth Dunfermline was.   The ‘blude-red’ wine sounded ominous, even then.   It’s strange how these few words can conjure so much in your imagination… a candlelit hall, a lavish banquet spread on long tables, guests in splendid velvets and furs, strong voices joined in laughter, servants bending to pour wine into silver goblets.

It would be interesting to know just how much wine was consumed at Dunfermline, because it must have been flowing pretty freely for the best part of 500 years.   Even in the early days of this Benedictine monastery there would have been royal apartments here, as there were in many religious houses.   This was the royal capital of Scotland, beloved of Malcolm III and his saintly queen, Margaret;   the Abbey church, raised by their son, David, was a powerful symbol of the House of Canmore. 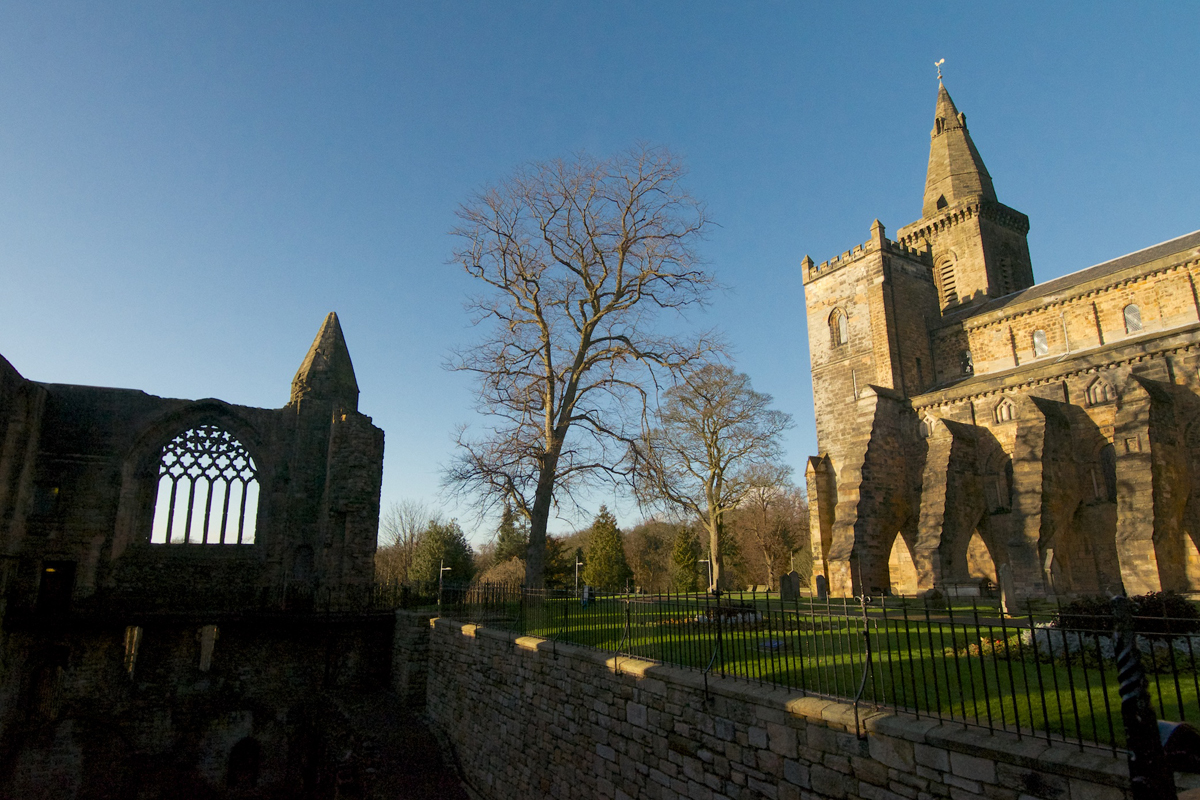 The Abbey church and the great west window of the monastery, seen from the refectory 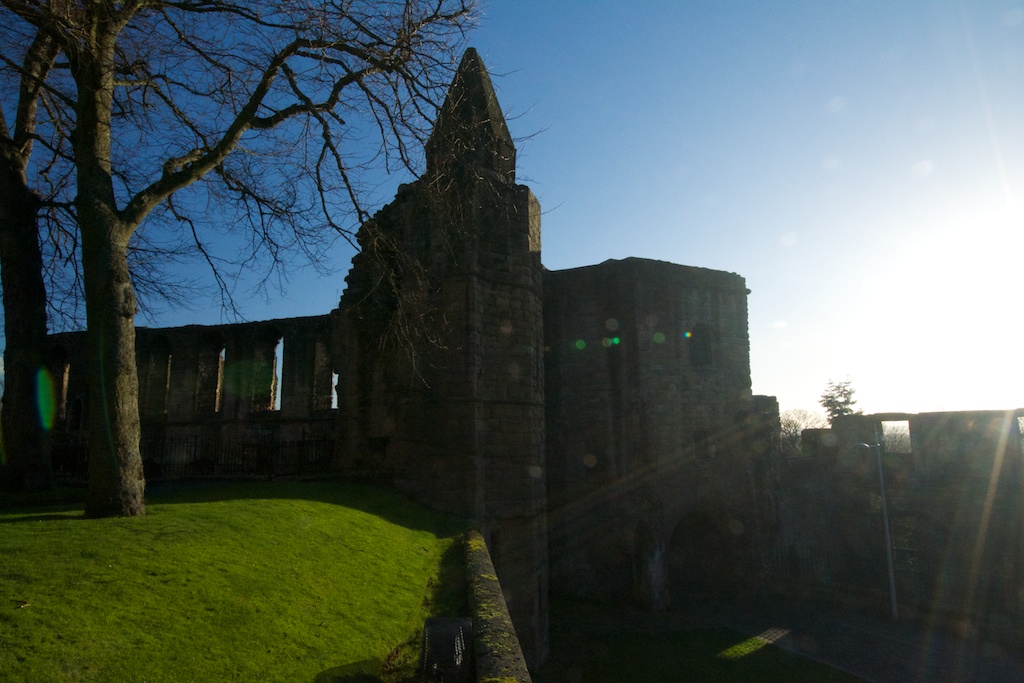 In 1303 Edward I paid a visit to Dunfermline.  The English king’s appearance at a Scottish monastery usually coincided with a house-warming party of the worst kind, and Dunfermline was no exception.   Edward whiled away the winter months by planning an attack on Stirling Castle, and on his departure he razed most of the monastery buildings;  mercifully, he chose to spare the church.

The repairs were financed by Robert the Bruce, and the new structures that rose at Dunfermline carried an unmistakable message of strength and confidence.  This was a golden era for Scotland’s monasteries:  in 1318 the king had attended the consecration of St Andrews Cathedral, one of the most impressive religious buildings in Europe.  Monarchs were eager to bestow their wealth and patronage on religious orders;  cynically, you might argue that they were paying for prayers, but by now the Roman Catholic faith was deep-rooted and it would take a hurricane to shake its branches. 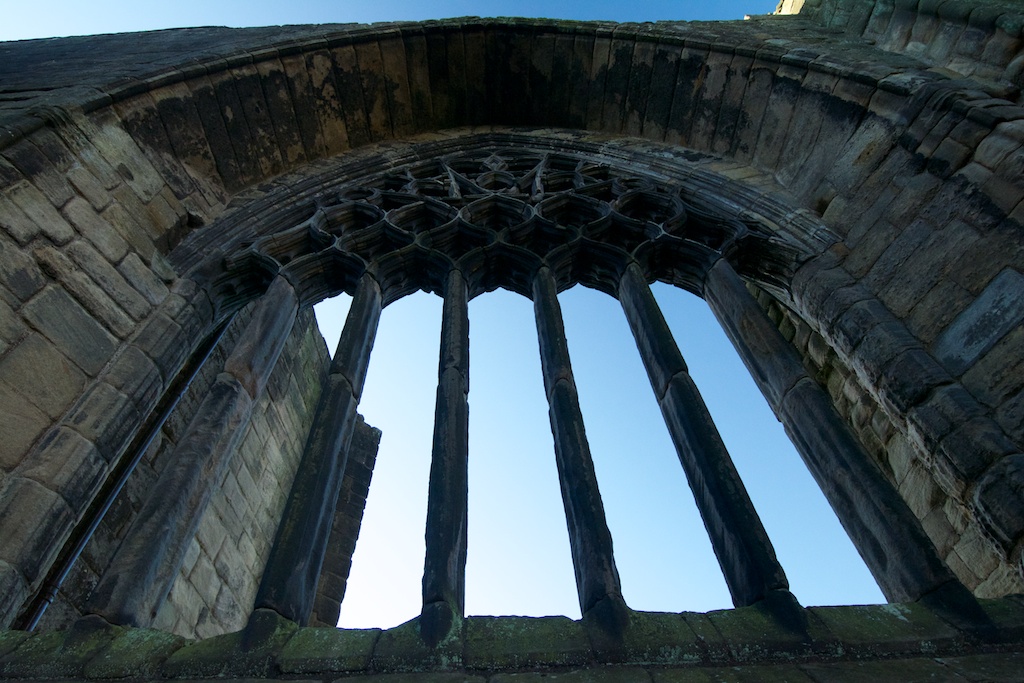 In 1560, however, that’s exactly what happened.  Sparked on the Continent, the Reformation swept through Scotland like wildfire, destroying everything in its path that was even vaguely reminiscent of the old faith.  Icons, statues, stained glass, holy relics… nothing was exempt, and nothing was spared.   The monks of Dunfermline, like their brethren up and down the country, were turned out of their home as their beloved church was ransacked and left to ruin. 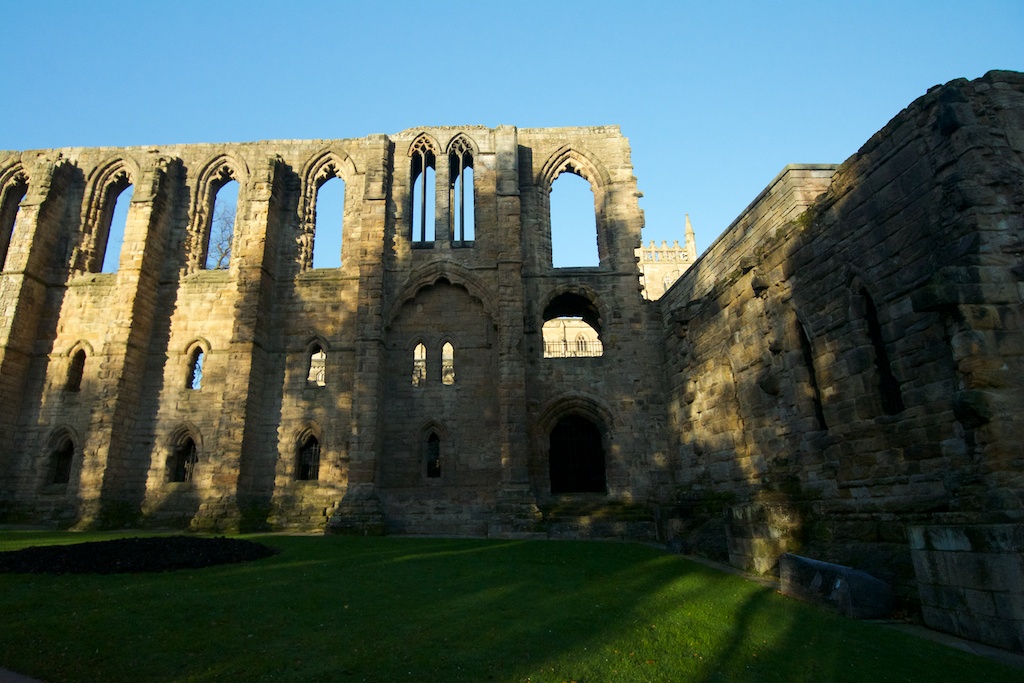 The south wall of the refectory still stands to a height of three storeys.  The dining area would have been on the top floor. 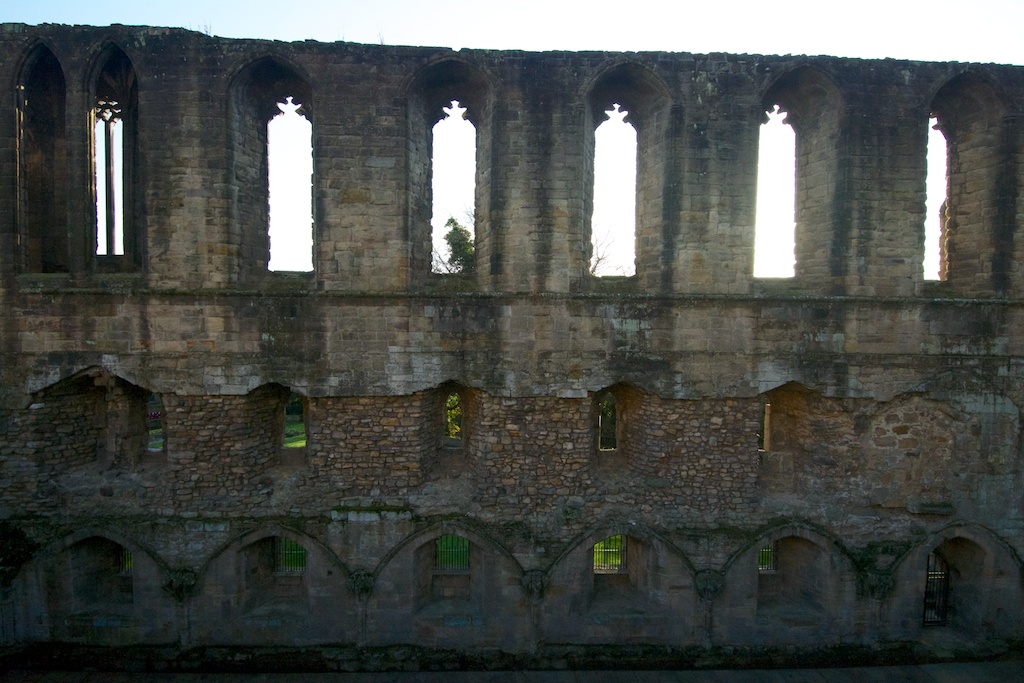 The back of the refectory wall 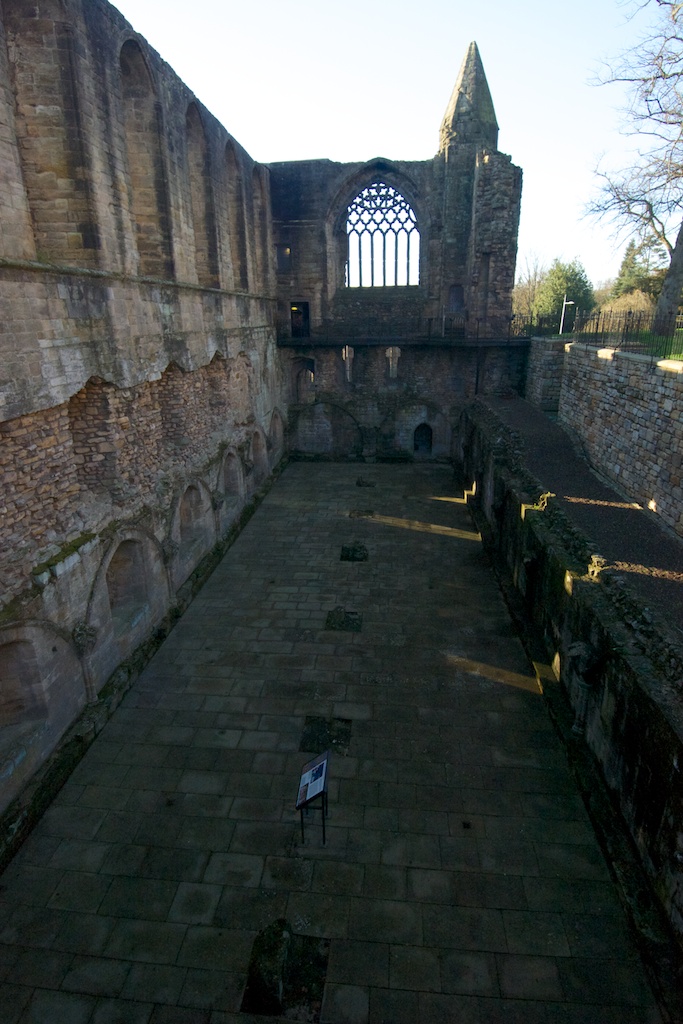 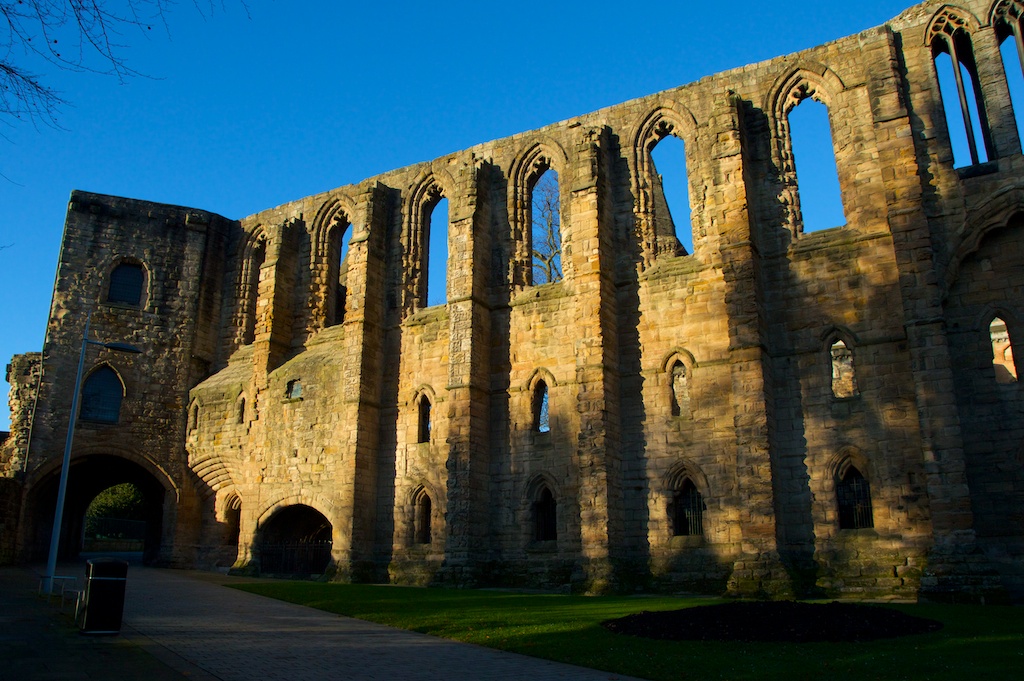 Refectory with the gatehouse to the left

That wasn’t the end of the story for Dunfermline, however.   Part of it, at least, was about to be given a new breath of life in the unlikely hands of James VI, son of Mary Queen of Scots.

James VI and I:   a study in paranoia 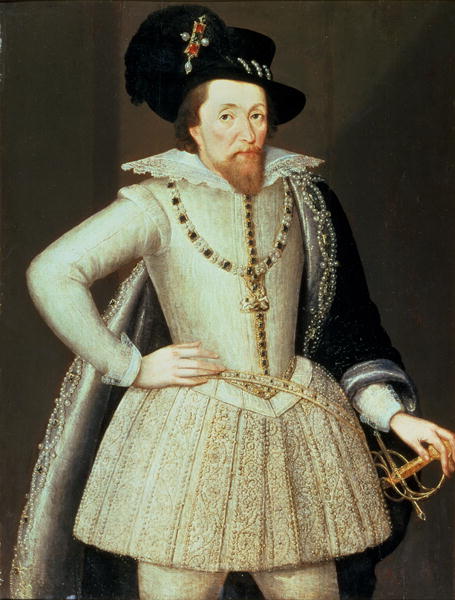 James VI and I by John de Critz the Elder

It was certainly not James’ fault that he grew up suspecting everyone of being a murderer.   From an early age, he had seen enough bloodshed at first hand to know that you could trust no one, least of all your friends.   Vengeance was one of his strong points.

In 1589 James was married by proxy to the 14-year-old Anne of Denmark, daughter of Frederick II;  and when a storm prevented her ship from reaching Scotland, he sailed from Leith to go and get her.   Somewhat ominously, another storm blew up to make their return journey less than romantic.

“First of all consider, that Mariage is the greatest earthly felicitie or miserie, that can come to a man…”  King James VI and I:  Political Writings

For some reason, an idea took hold in James’ head that the weather spoiling his bridal progress was the work of witchcraft.  This was the cue for a long and vitriolic campaign against sorcery throughout Scotland, and his satisfaction at sending so many women to the stake cannot have made him a very endearing husband to live with.  By all accounts, he and his bride started to drift apart, and it didn’t help that James took their first son, Henry, away from Anne to be brought up elsewhere.  James gifted the buildings of Dunfermline Abbey to his wife so that she could convert them into her own royal residence, and she might well have leapt at the chance to build a happier and more independent life. 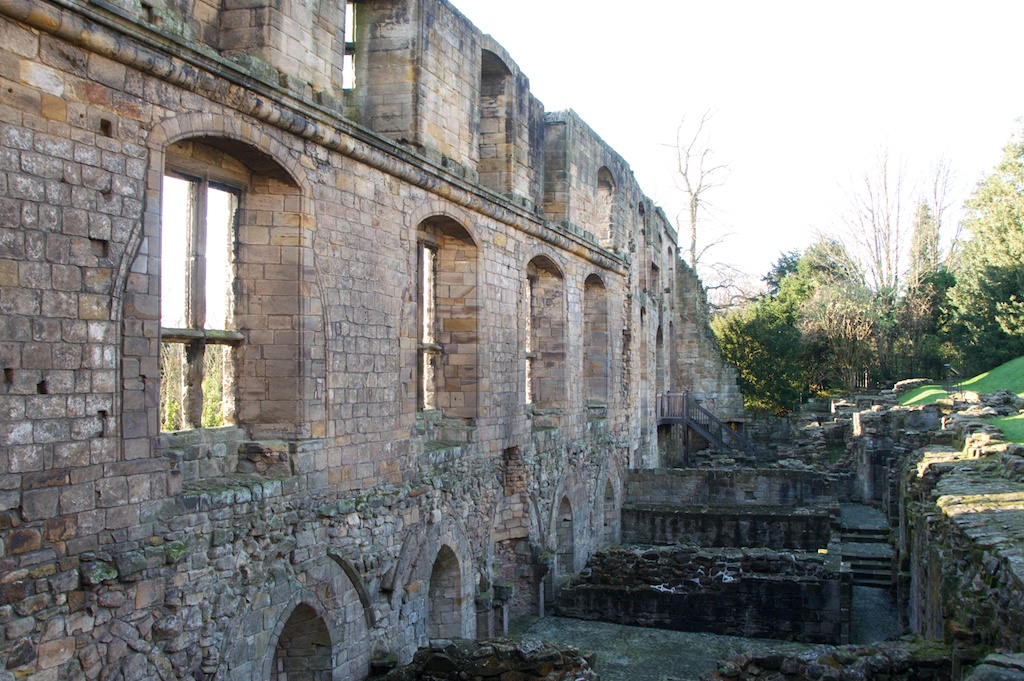 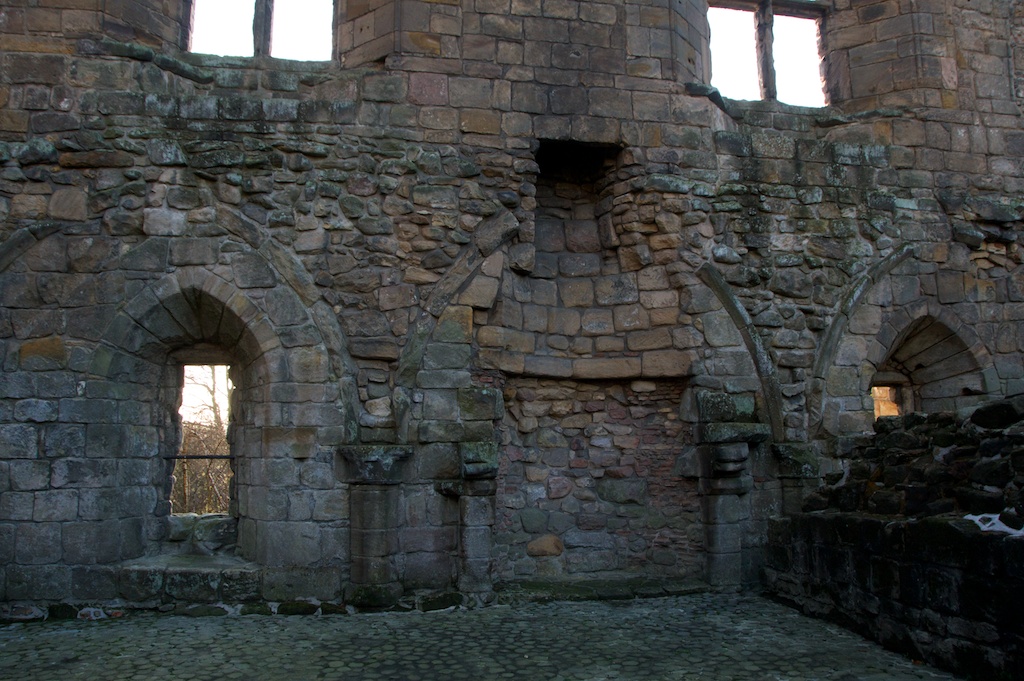 Detail of Palace wall, showing modifications to older arches on the ground floor and large windows above 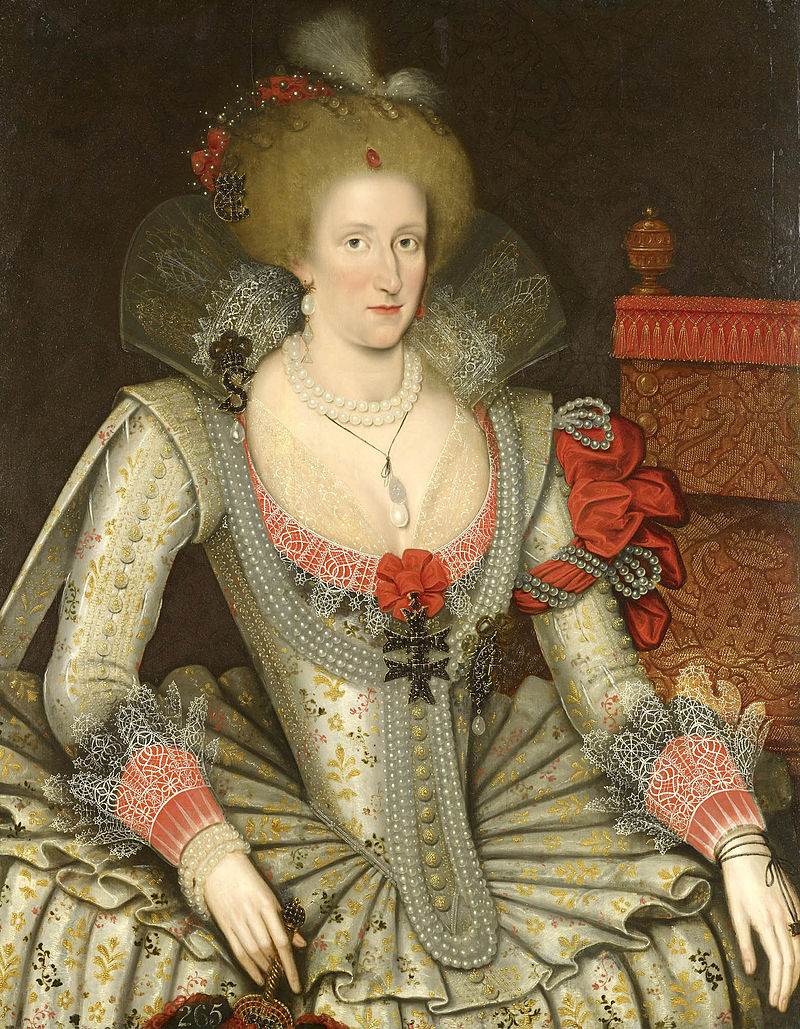 Anne of Denmark, attributed to Marcus Gheeraerts the Younger

A palace for a Queen

Under Anne’s direction, the Abbey’s royal guest house came to be expanded and enhanced to create a splendid palace capable of accommodating a large court in luxurious surroundings.   Big oriel windows overlooked the wooded ravine of the Tower Burn, far below.  Perhaps to console herself – and you can hardly blame her – Anne had developed a taste for finery and entertainment, and the chambers must have been vibrant with music and conversation and laughter.

On 19th November 1600 Anne gave birth to a second son, Charles I, at Dunfermline Palace.  Charles was the last king to be born in Scotland, but it wasn’t expected that he would inherit the throne at all:  his older brother, Henry, Prince of Wales, was widely expected to fill that role.  Handsome, talented and popular, Henry broke the heart of a nation, and in particular his mother, when he died of typhoid at the age of 18.

In 1603, James and Anne were crowned King and Queen of England in Windsor Castle. Their growing commitments south of the border, combined with Anne’s love of London society, meant that Dunfermline and its glorious palace gradually lapsed into disuse.  The Civil War sealed its fate, and by the early 1700s it was an abandoned ruin.   The windows cast bold shadows in the setting sun, but this is an empty place, open to the elements, as brittle and lifeless as a broken eggshell. 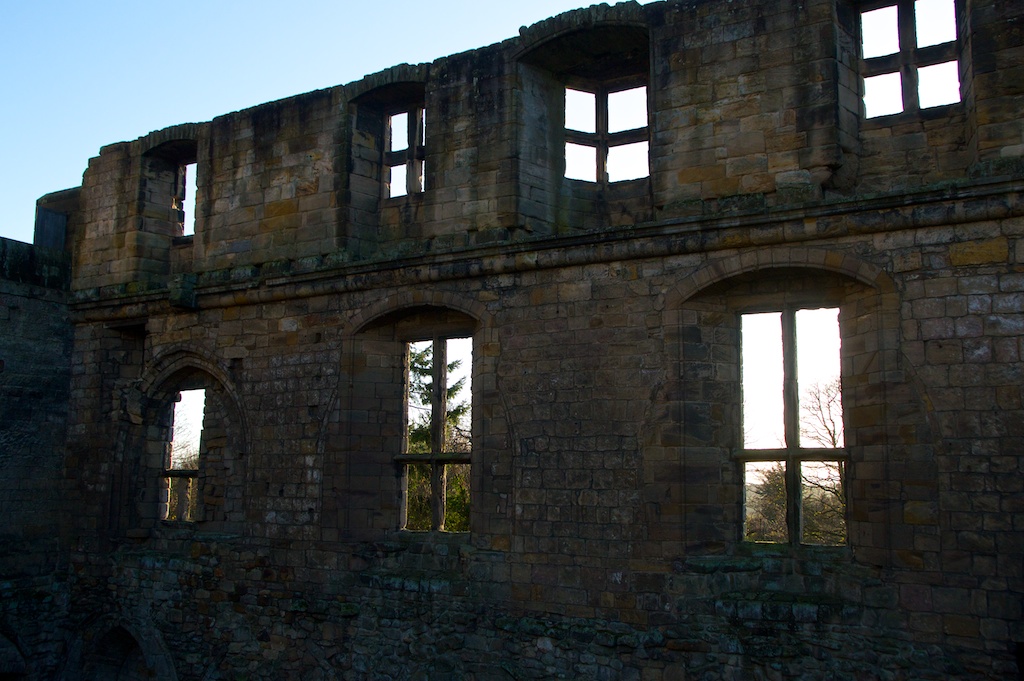 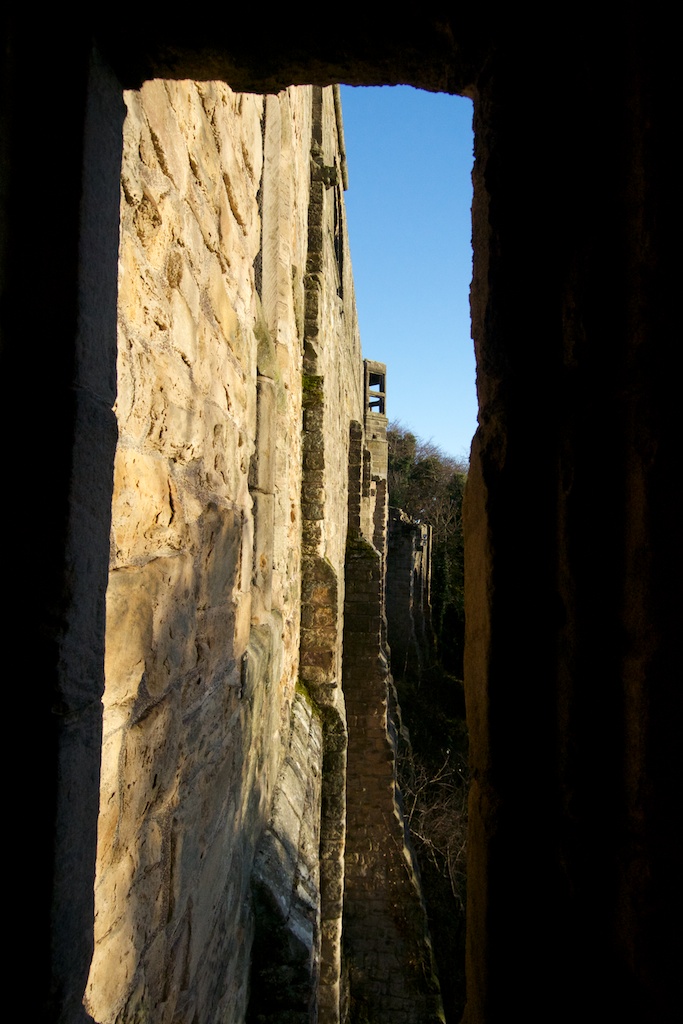 A walk around the ruins 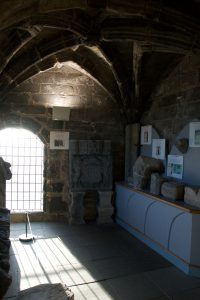 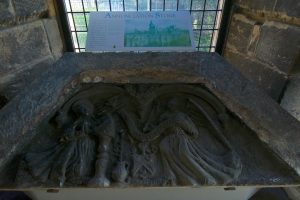 The ‘Annunciation Stone’, discovered above an oriel window in the Palace and bearing the arms of George Durie, Abbot of Dunfermline; it is believed to date from between 1538 and 1560 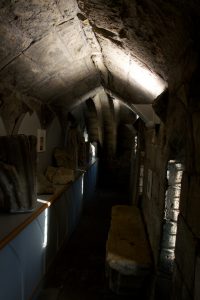 The Historic Scotland visitor centre occupies the top part of the gatehouse;  in two small vaulted chambers there’s a display of old stonework and carvings salvaged from the abbey. 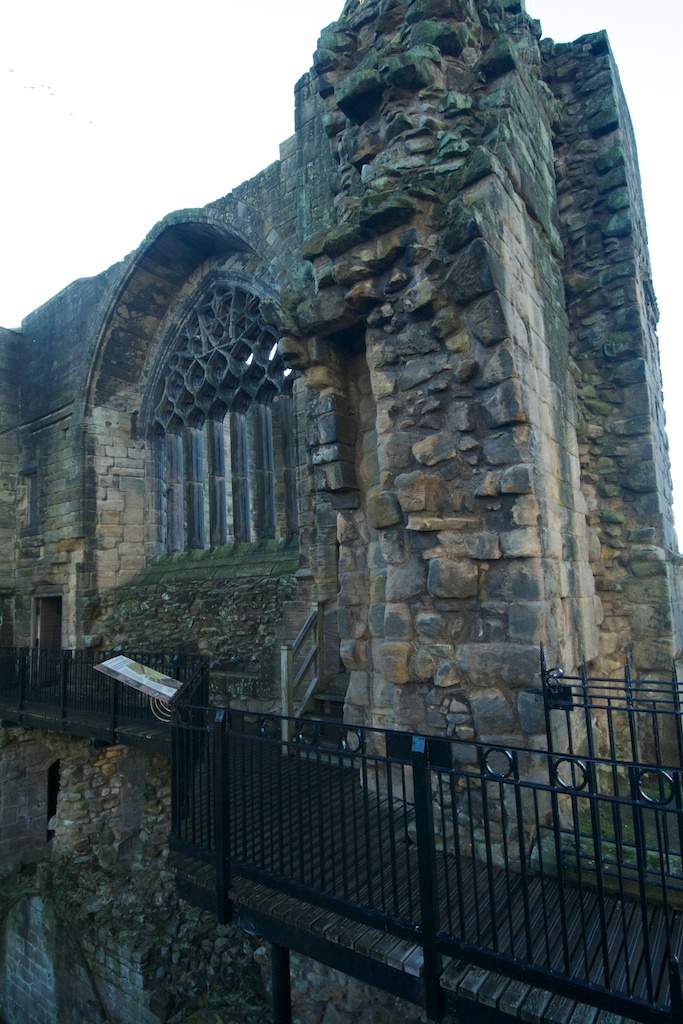 Walkway around top floor of refectory 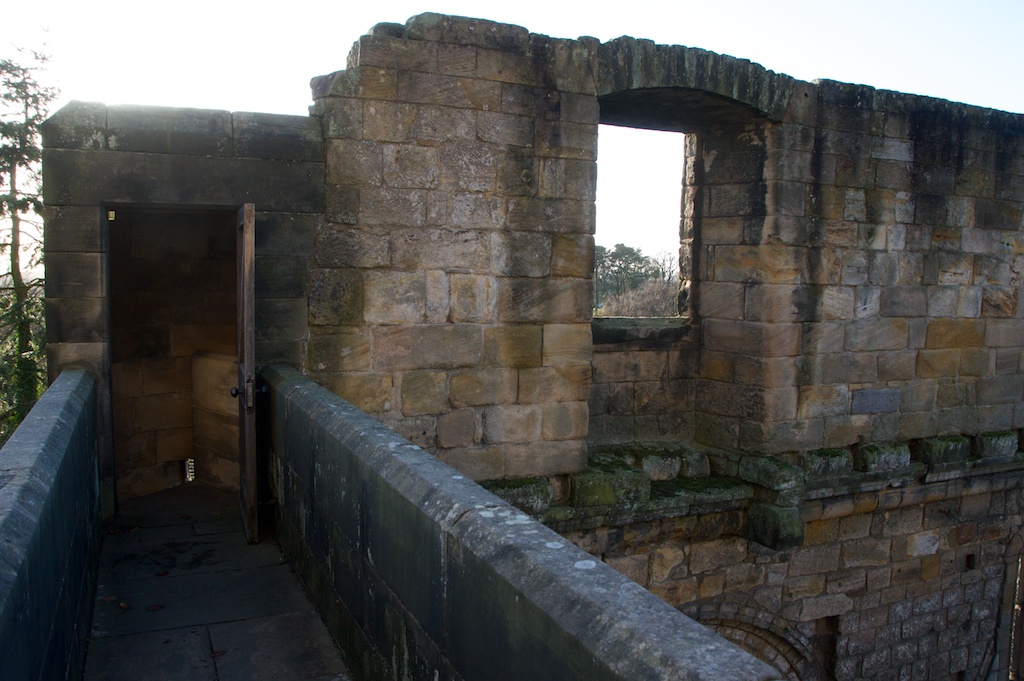 You wouldn’t think it, but there’s a spiral stair inside that opening!    It’s incredibly tight, and you have to place your feet sideways.  It leads down to the kitchens and undercroft of the Palace. 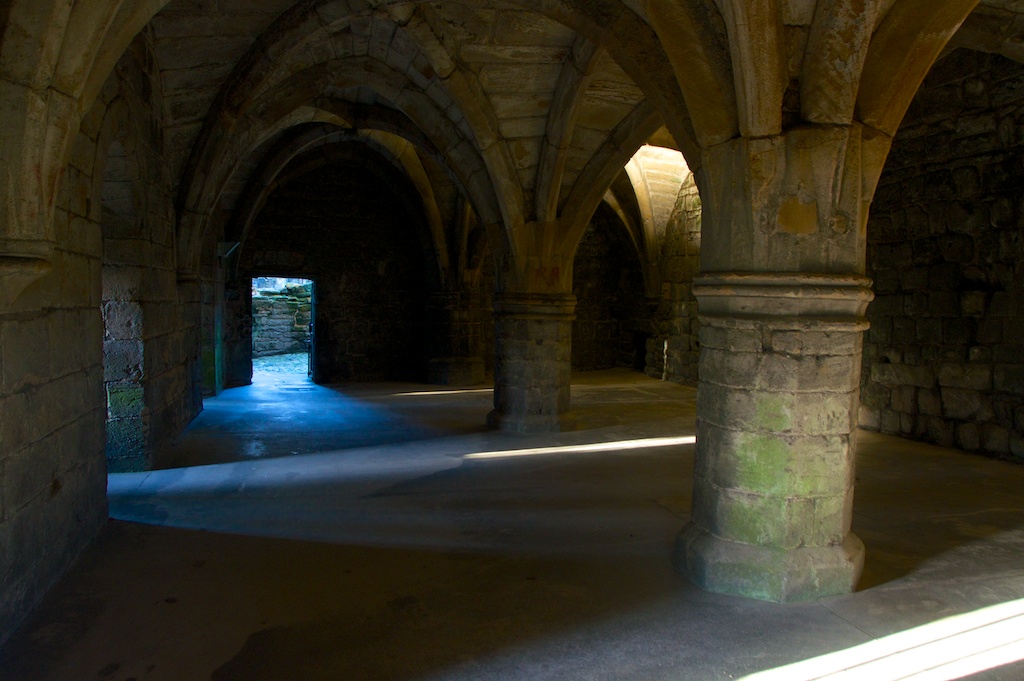 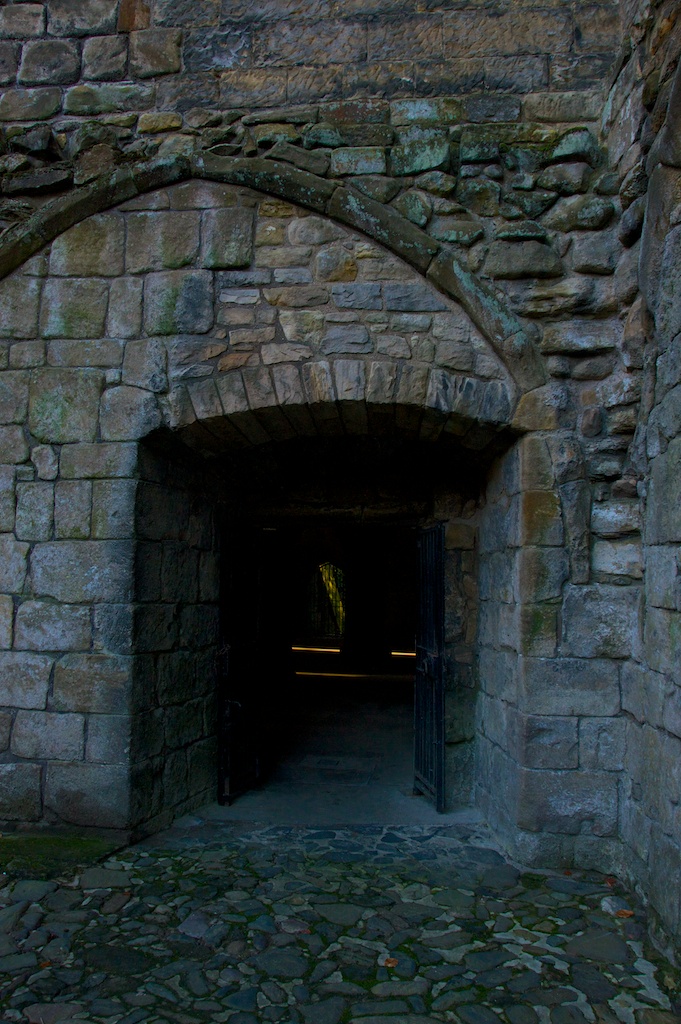 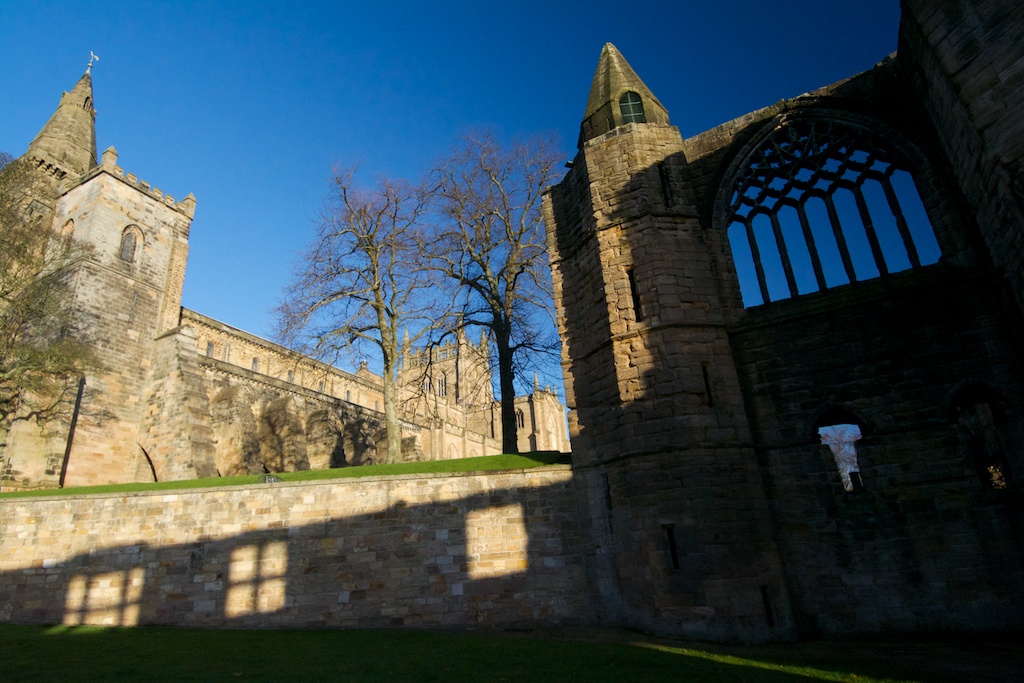 The Abbey church and west window of refectory 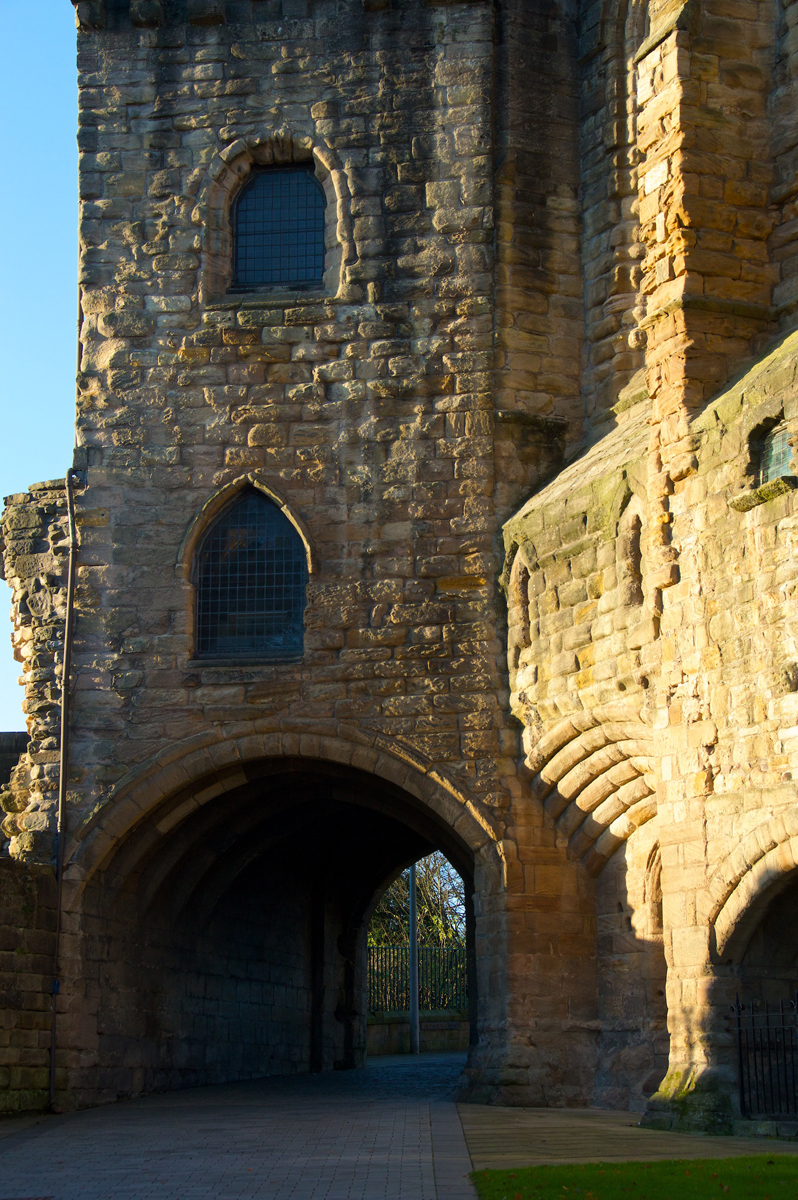 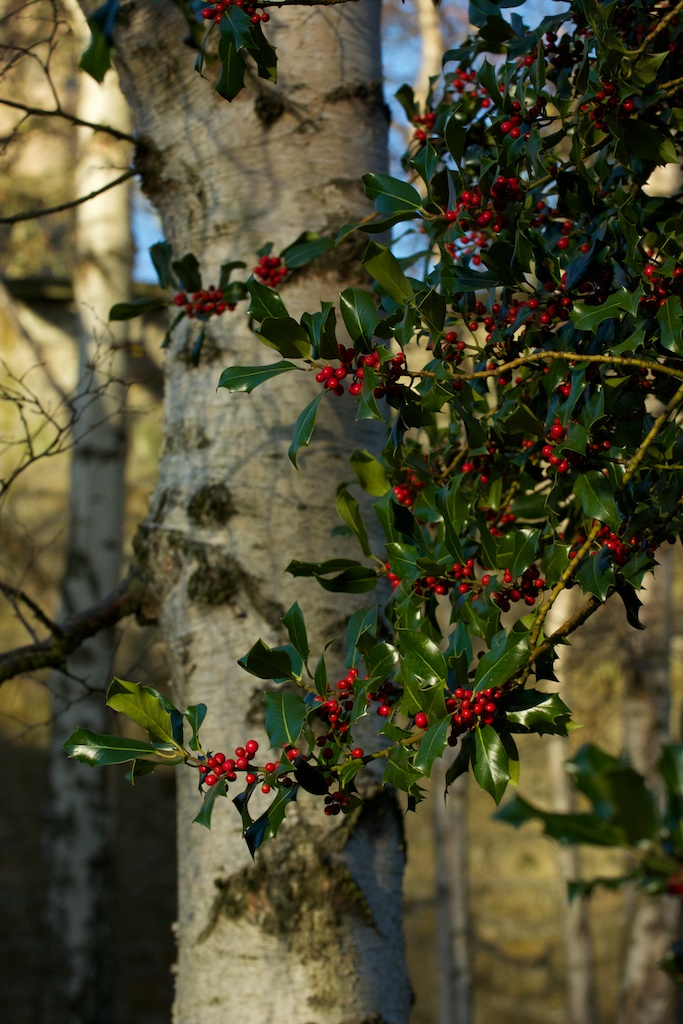 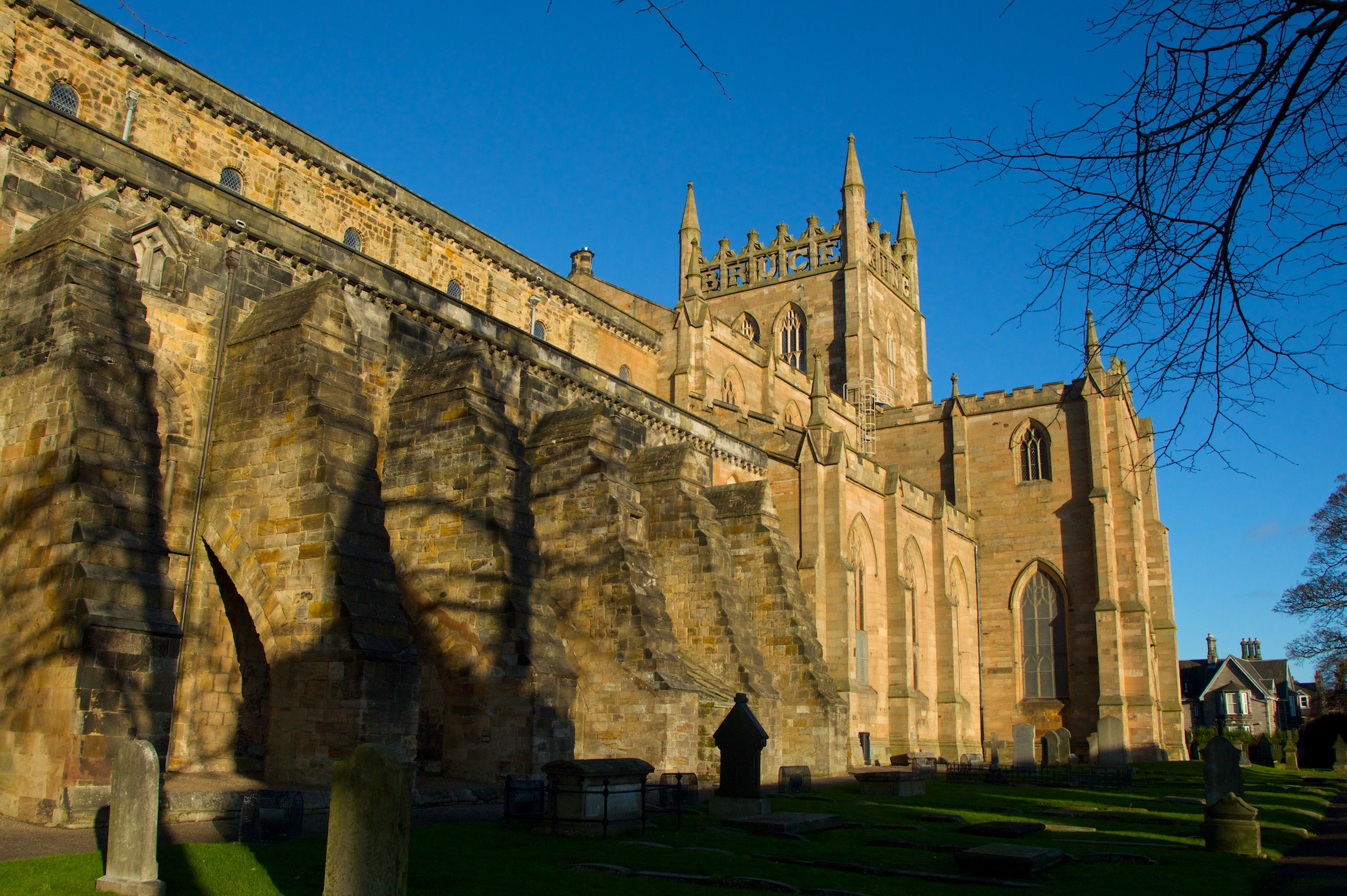 If you missed Part One of my feature about Dunfermline, you can read it here.

Looking further afield, take a walk around Stirling Castle, or the wonderful cathedral of St Andrews.