Back in August, I visited the Devil’s Arrows near Boroughbridge in Yorkshire, and was very intrigued by the strange vertical grooves on their surface.  They put me in mind of some other standing stones I’ve seen recently – the Tuilyies stones near Dunfermline in Fife. 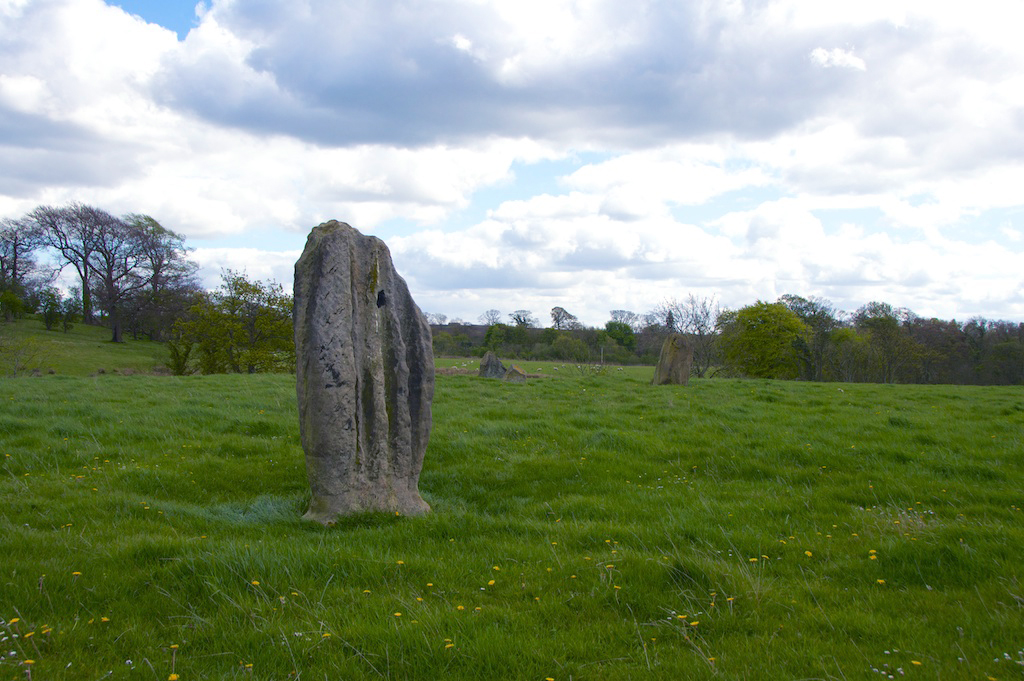 I guess if you were comparing standing stones to savoury snacks – which I’m sure you weren’t – the Devil’s Arrows could be cheese straws while the Tuilyies are more like deep-ridged crisps.  I’m not saying that this was their original purpose, although they could well have been the venue for a great party, at one time or another.

We visited the Tuilyies stones on a cold day in early spring, with the wind whipping up from the Firth of Forth and making it difficult to stand around, even with a thick coat on. 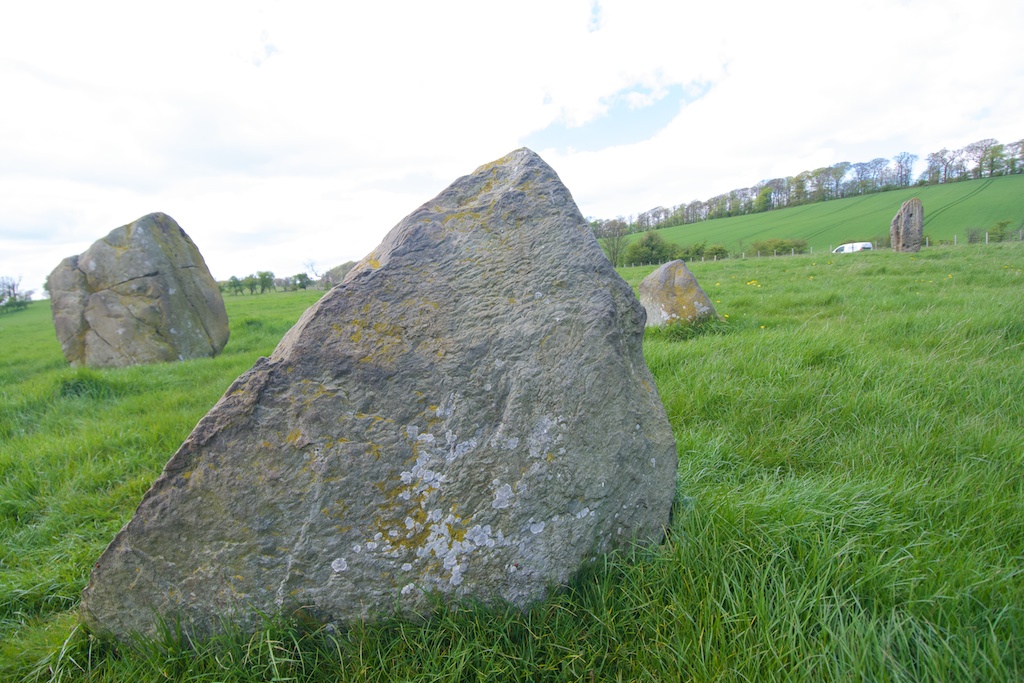 It is immediately obvious that this is no stone circle, although the exact alignment is a bit of a puzzle.  The main stone, known as the Tuilyies Stane, stands about 25 yards away from three smaller, irregular boulders, which are arranged in a close group.  Canmore, the RCAHMS database, says that the three smaller stones are of whinstone, while their larger neighbour is of grey sandstone, and reveals that ‘there seems little doubt that they mark a Bronze Age sacred site.’ 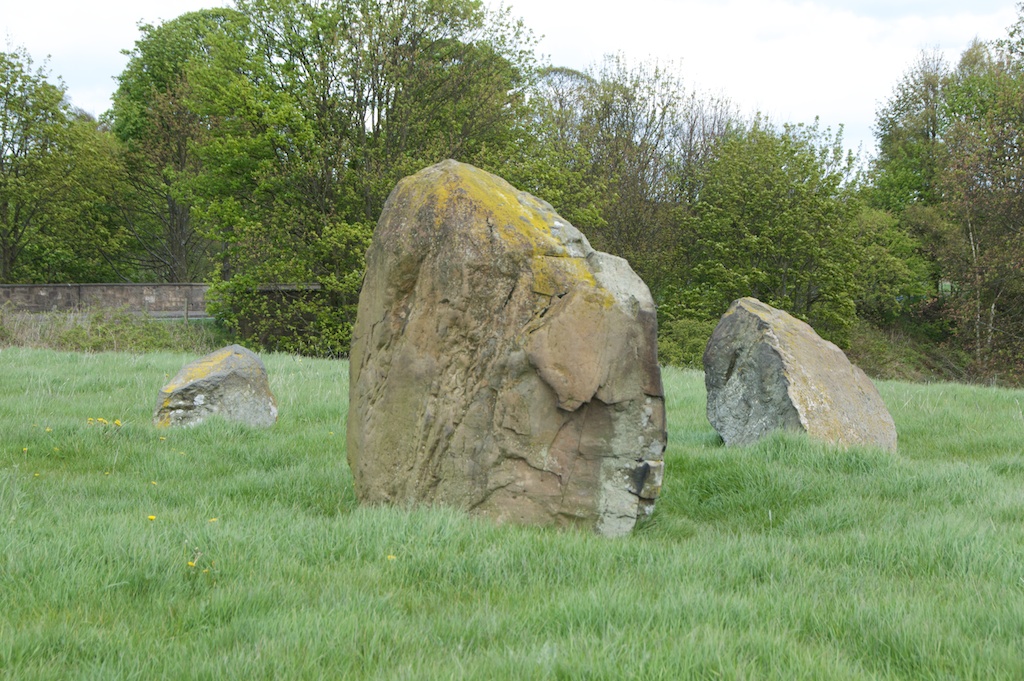 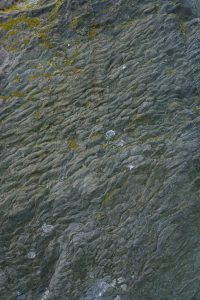 Texture on one of the smaller stones 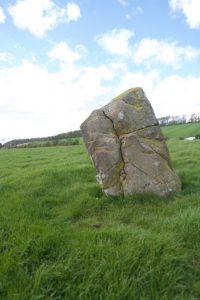 One of the group of three 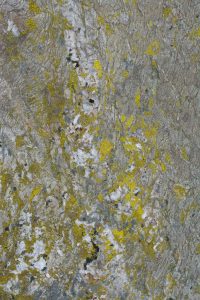 There is little to examine on the smaller stones beyond the natural markings of their geology.  They appear to be lying at random, like a handful of dice tossed by a careless giant, whereas the single, taller stone seems deeply rooted:  a sentinel, perhaps.   But standing guard over what?   I can find no record of any finds here, or any excavation at all, for that matter.   The only clues are the stones themselves, and the largest one seems to hold all the cards. 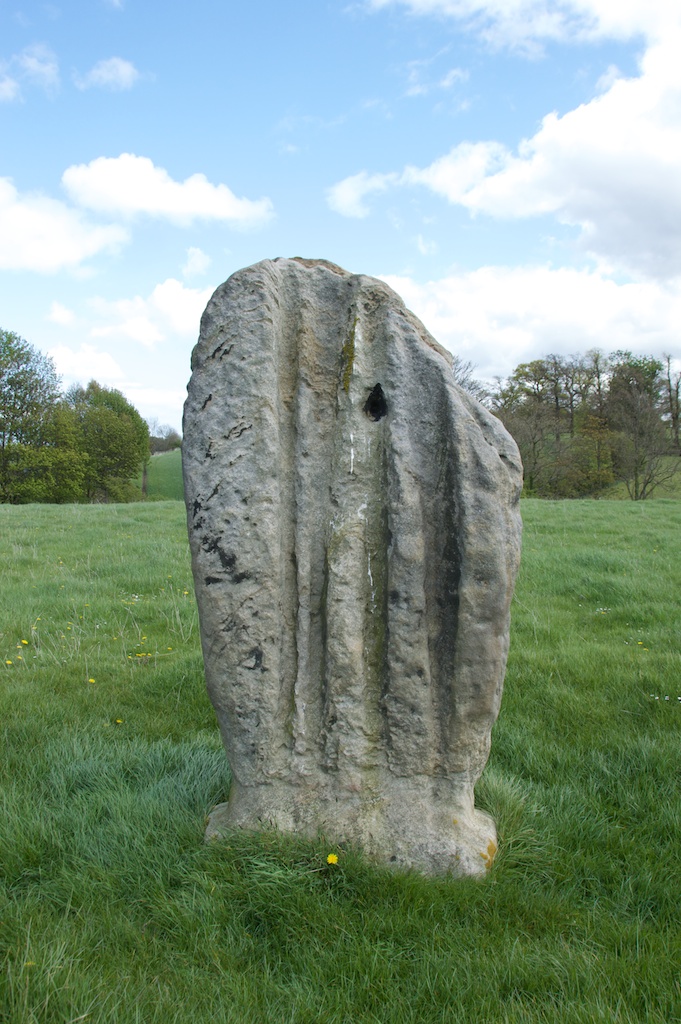 It stands about eight feet tall, and is curiously shaped, tapering gently from a curved top before widening out a couple of inches on each side just before ground level.  On the western face there are four deep furrows, while on the east there are at least five, if not more, but these are slightly shallower – although whether this is through intention or natural erosion, it’s impossible to say.  If you look at the stone side-on, there is another long narrow groove right up the centre;   minerals and lichen are accentuating this in shades of black and brown, making it look like a deep scar. 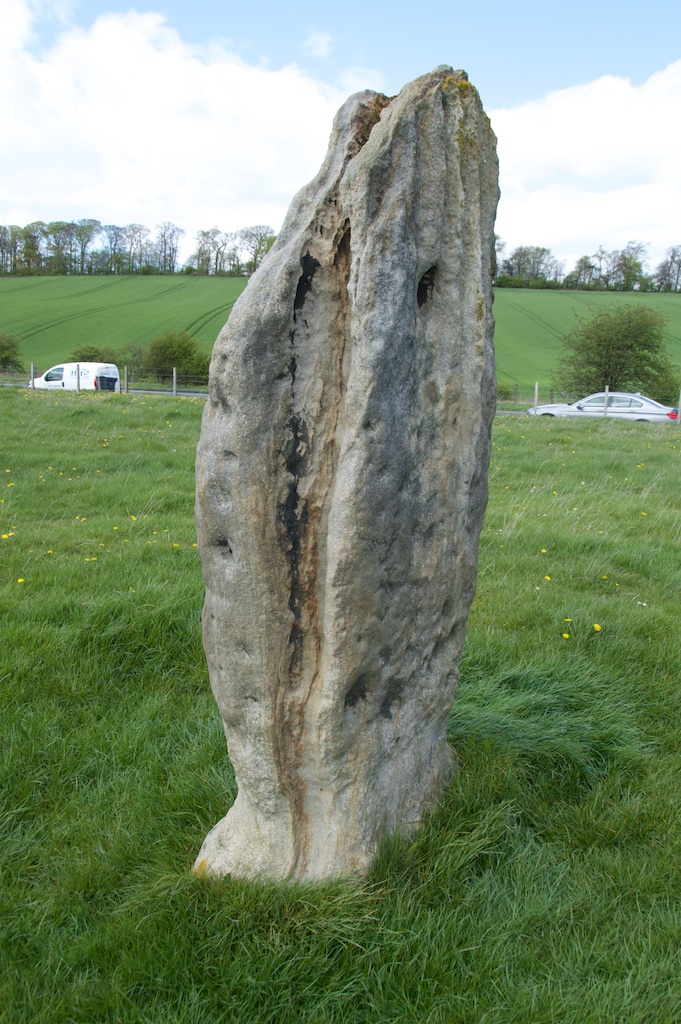 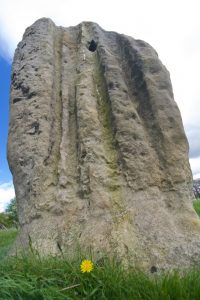 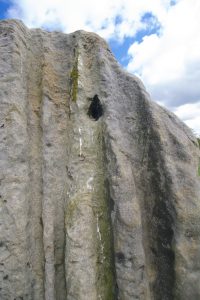 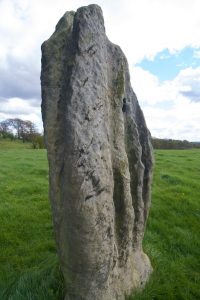 In addition, the east face of the stone is pitted with a number of pock-marks or cup-marks, and I’m inclined to think that there are a few more cup-marks running up the narrow south-facing side, too.   A hole has been bored into the top half of the surface on both sides of the stone, about seven inches in depth, but curiously the holes do not meet in the middle.   I noticed that one of these cavities contained little ‘gifts’, including a modern penny.   People will always bring offerings to stones.   It’s useless to deny it – it’s in our genes. 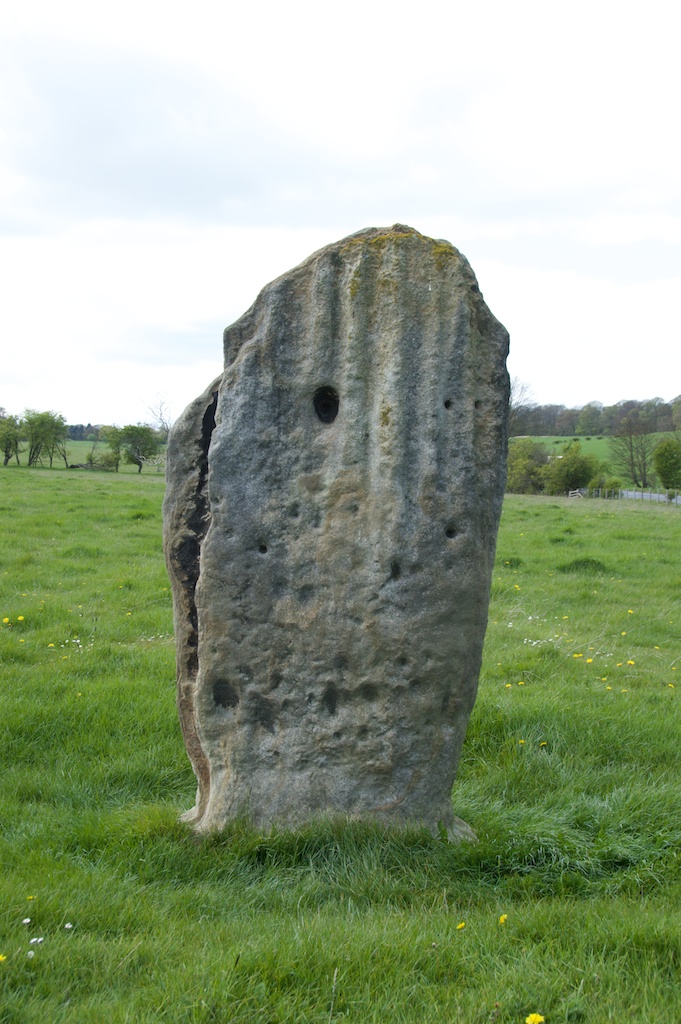 “The name ‘Tuilyies’ is a corruption of the Scots word ‘tulzie’ which signifies a fight, and the stones are said to mark the graves of chiefs who fell in an alleged battle here.”

Like many megalithic sites, the Tuilyies stones are traditionally connected with a battle, possibly at the time of the Viking raids;  but any dates or names have been lost in the mists of folk memory.

However, an internet search turned up another interesting link, of a woman named Lilias Adie who was condemned as a witch in 1704.  Having died in prison – perhaps mercifully – she was buried in Torry Bay, between the low and high water marks.   A slab that was thought to have covered her grave was discovered in the tidal mud by archaeologists in 2014. 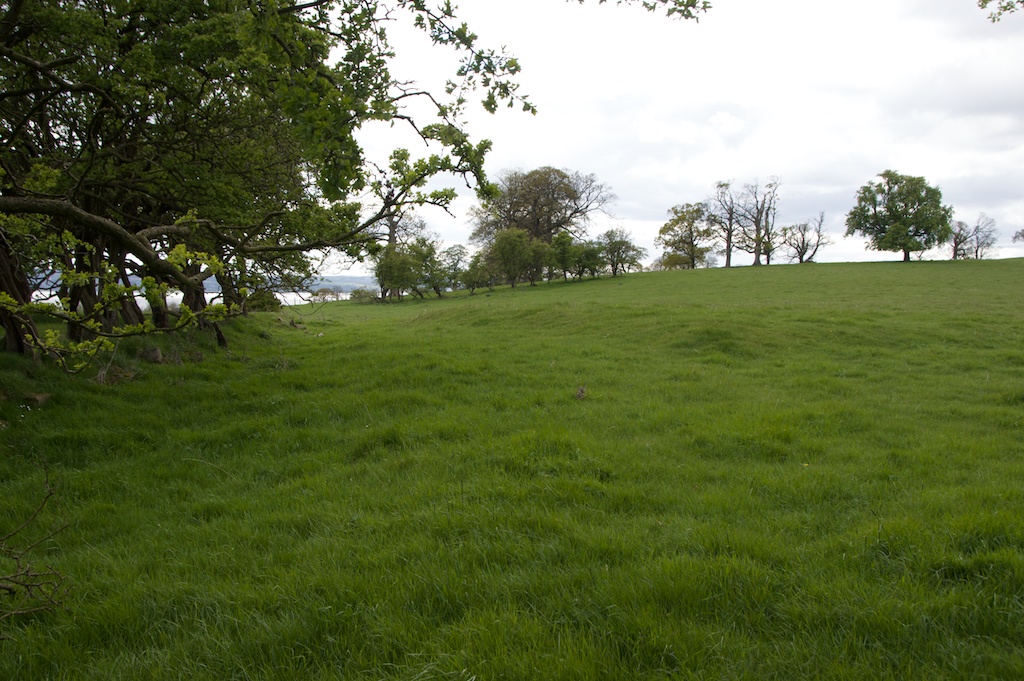 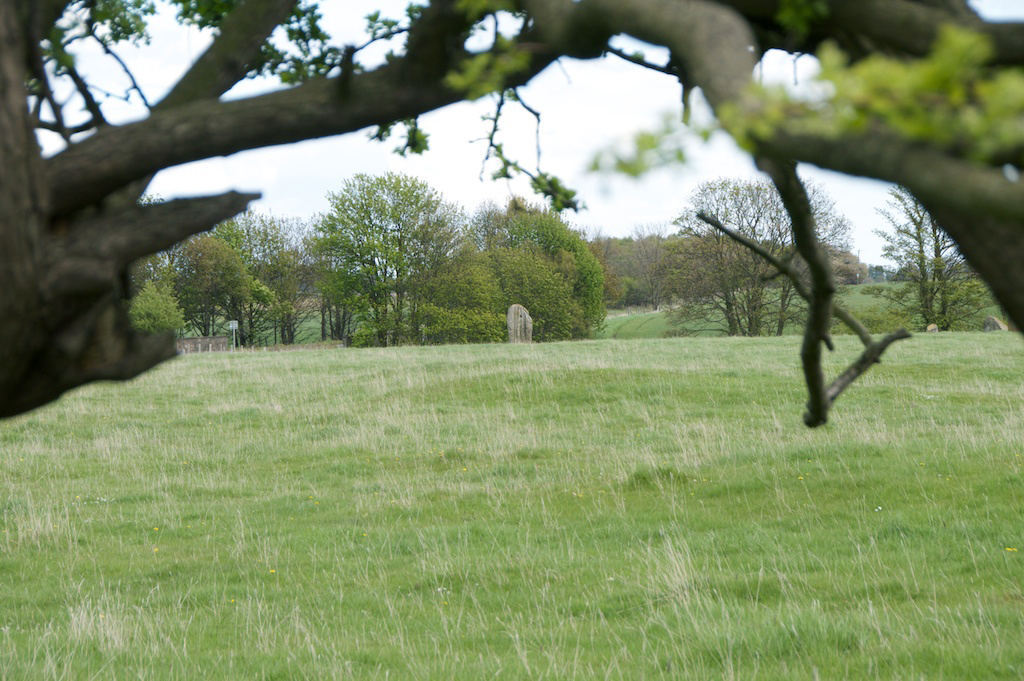 I’ve often noticed the appearance of trees surrounding an ancient site, but never have I come across anything quite like the spectacular presence at Tuilyies.  A couple of hundred yards to the west, at one end of a short row of hawthorns which once marked an old field boundary, stands a dead tree.  From its branches, I would say it may have been an oak, and it must once have been a magnificent specimen;  but now its central trunk is broken and jagged while its lower limbs extend wildly like flailing arms frozen in the last throes of death.  A lightning strike seems to be the most logical cause, but I’m coming to think that nature reflects the energy of a landscape in more ways than we realise.  And this skeleton tree had an presence that made me steer well clear of it. 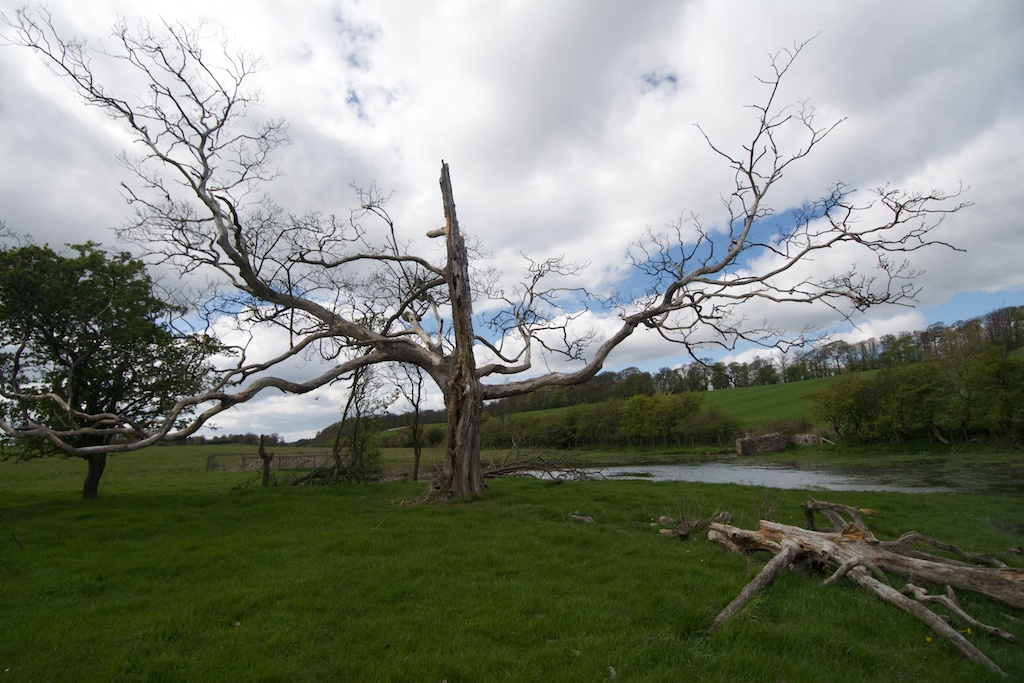 A look at the 6” map of this area from 1854 reveals that there are a couple of ‘trial pits‘ in the vicinity, possibly dug by prospectors looking for coal in the 18th century;   just beyond the dead tree is a fenced-off pile of stones, which may be the spoil from a mine working or even the entrance to it, and a pool has formed in a shallow depression. 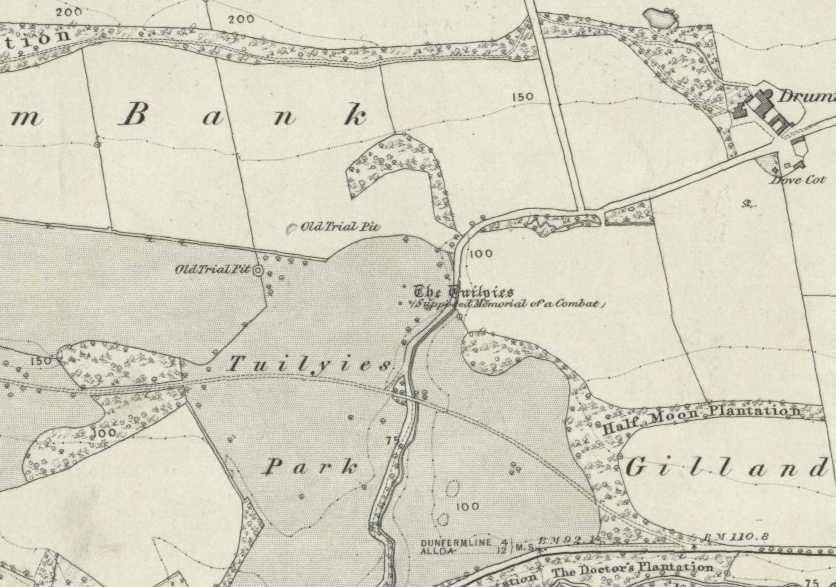 To the south, Torry Bay opens out into the Firth of Forth, with the refineries of Grangemouth visible across the water.   I was interested to read that the mudflats here are incredibly rich in snails and ragworms, attracting thousands upon thousands of shore birds in the winter, including curlew, redshank, dunlin, shelduck and great crested grebe;  there’s also an abundance of eelgrass, one of the favourite foods of wigeon. 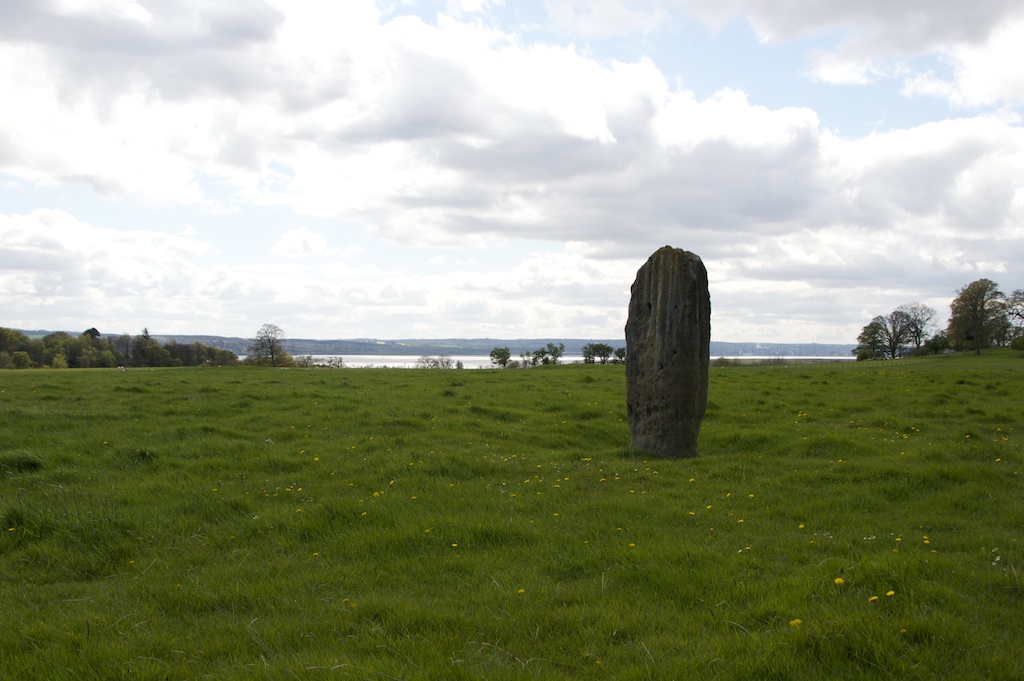 It’s impossible to know what to make of the Tuilyies stones, because you get the impression that so much has been lost;   the stones could have been moved or damaged by impatient farmers, or attacked by a particularly energetic priest whose mission was to stamp out all traces of pagan worship in the parish during the 17th century.   As for the grooves, the accepted belief is that they were created by weathering, just like the marks on the Devil’s Arrows.   Once again, I am not convinced.   I would be interested to hear your opinion!

They are in a field on the south side of the A985 from Rosyth to Kincardine, just a mile or so west of Cairneyhill. 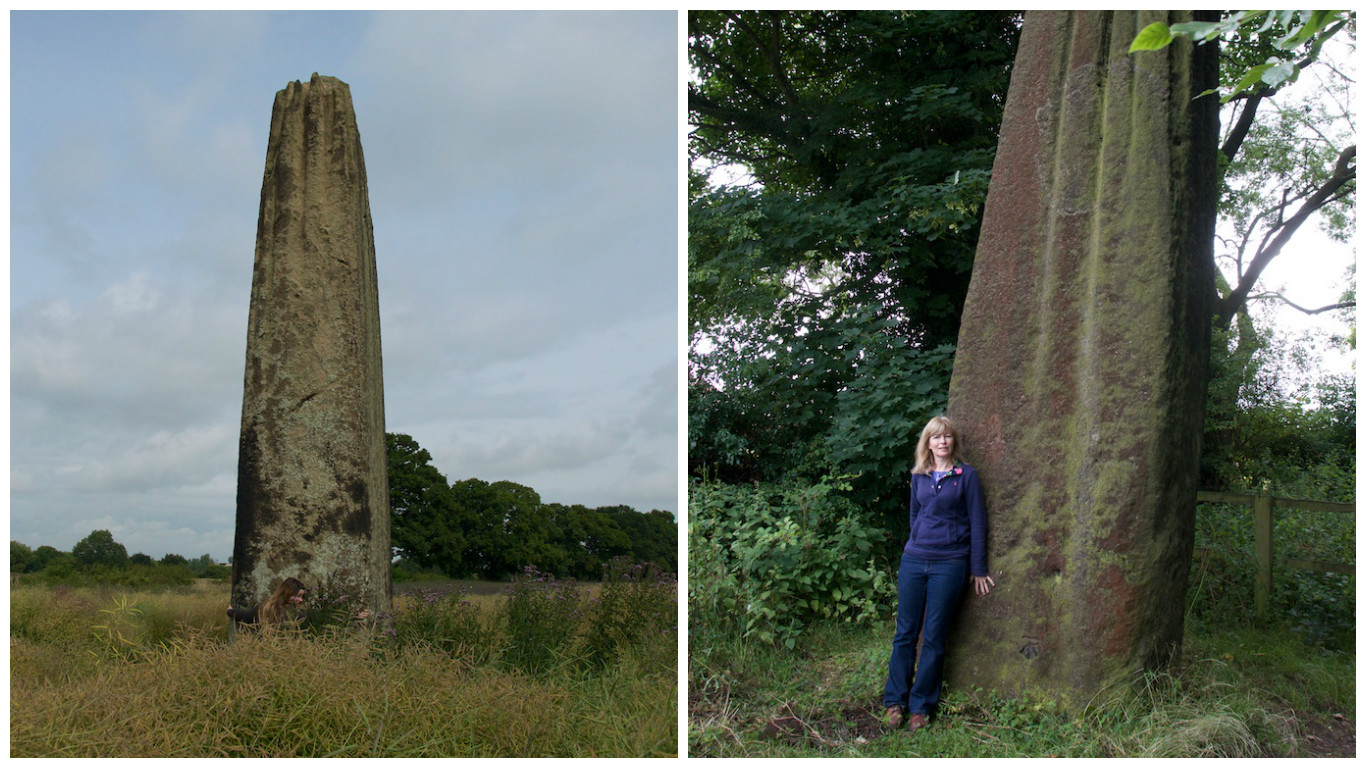