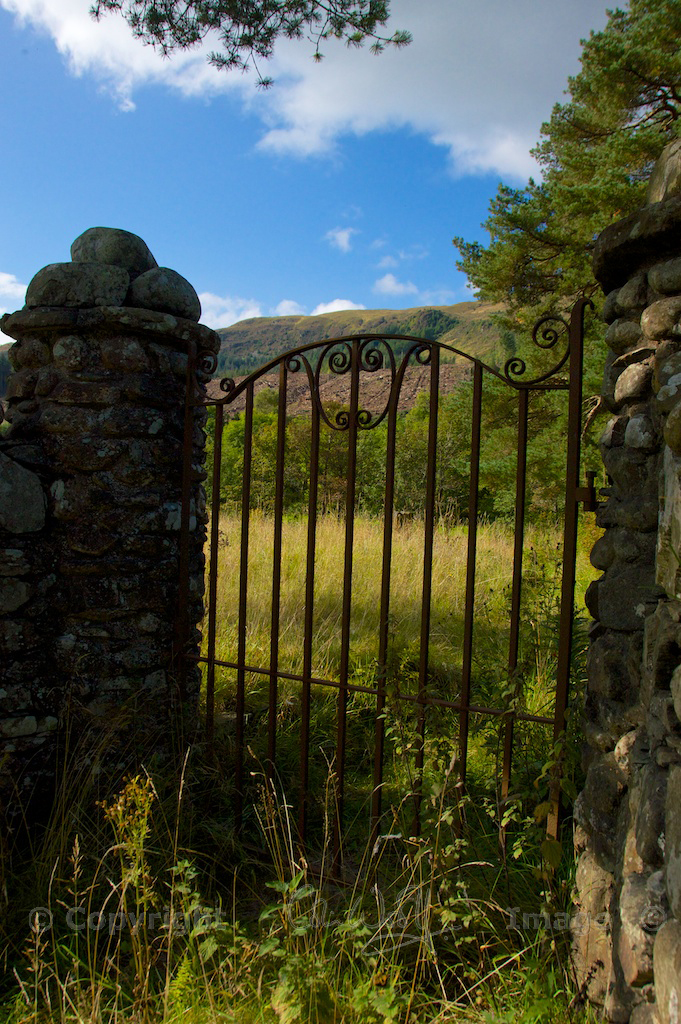 Some of you may remember that in September last year I wrote about a little graveyard on the road between Callander and Loch Lubnaig, in which are buried several members of the McKinlay clan.   The graveyard once surrounded a small chapel dedicated to St Bride, and is in fact mentioned in Sir Walter Scott’s ‘The Lady of the Lake’.

On 7th September this year – strangely, it was exactly a year later, to the very day – Colin and I went there again, along with some new friends, and for a very special reason.

When I published my post it attracted quite a lot of interest from McKinlays and their relatives around the world;   several of them have a line of descent that can be traced back to this small graveyard and the people buried in it.

Among the people who got in touch with me last October was Moira Goodman from Dunfermline, who knew about the graveyard already but told me that she had greatly enjoyed the article.   Moira kindly shared with me an old photo of the graveyard, taken in 1910, and she also filled me in on the genealogy of the McKinlays of Annie, near Callander, some of whom settled in Canada in the 1800s.   Then, in August this year, a lady called Jean emailed to say that she and her husband Terry were planning on coming over from the US to see St Bride’s, where Terry’s 5 x great grandparents were buried.  I was excited to meet them, and I also felt that the two families should definitely meet up!

Specifically, both Moira and Terry can trace their lineage back to John McKinlay and Elizabeth Ferguson, who are buried at St Bride’s.  John was born in 1679, and died in 1732.  The graveyard is now quite overgrown, and the only stone still standing is that of John and Elizabeth’s son, James, who lies together with his wife, Elenora, and their son, Peter. But once you begin walking around the site you realise that there are more graves, together with what I believe are the foundations of the old chapel. 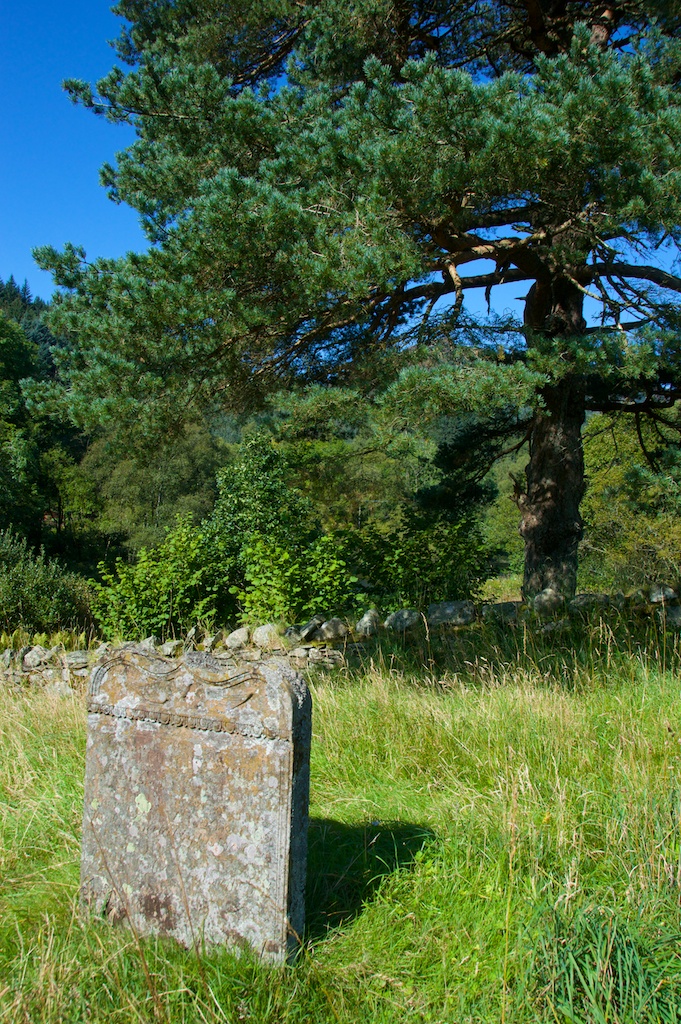 It was an absolute delight to meet Jean and Terry, along with Moira and her husband, Peter, on a sunny morning in Callander, and to drive the short distance to St Bride’s.   As I’ve said before, the graveyard is not the easiest place to access, lying on a sharp corner at the end of a straight section on the busy A84.   If you’re thinking of visiting it yourself, take great care in walking there and in getting your car off the road;  there’s a lay-by just a couple of hundred yards before it. 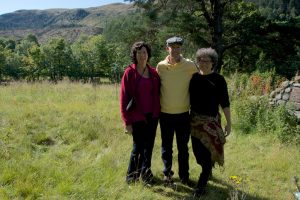 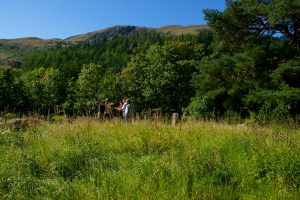 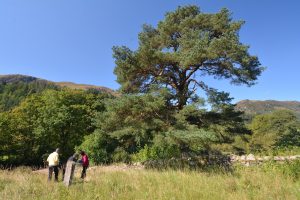 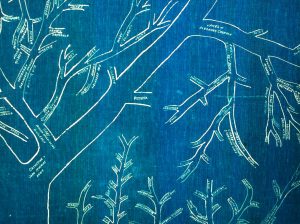 A small section of Terry and Jean’s extensive family tree – an heirloom in itself, drawn on blue canvas over 100 years ago 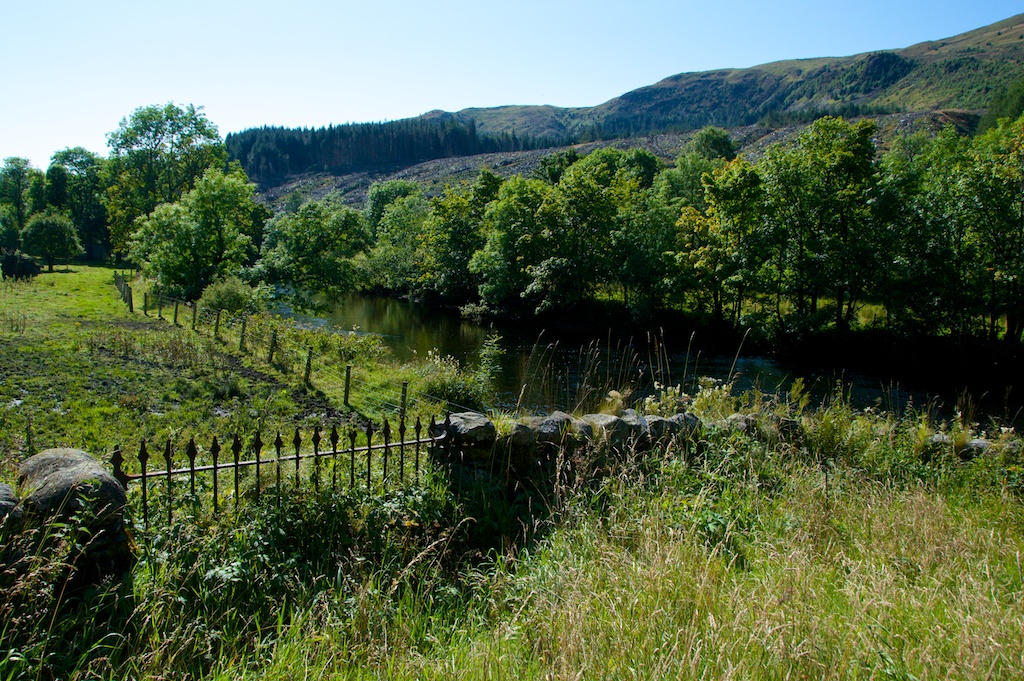 Moira had already visited St Bride’s and knew of its significance in her history, but for Terry and Jean it was a new and lovely experience;   I cannot think of a more beautiful spot to find as the last resting place of your ancestors.

I know that Moira, Peter, Jean and Terry explored a few more graveyards during that week, and shared a lot of anecdotes and insights about their family trees.   What a nice thing to have happened.   I am thrilled to have met them, and to have been able to bring them together. 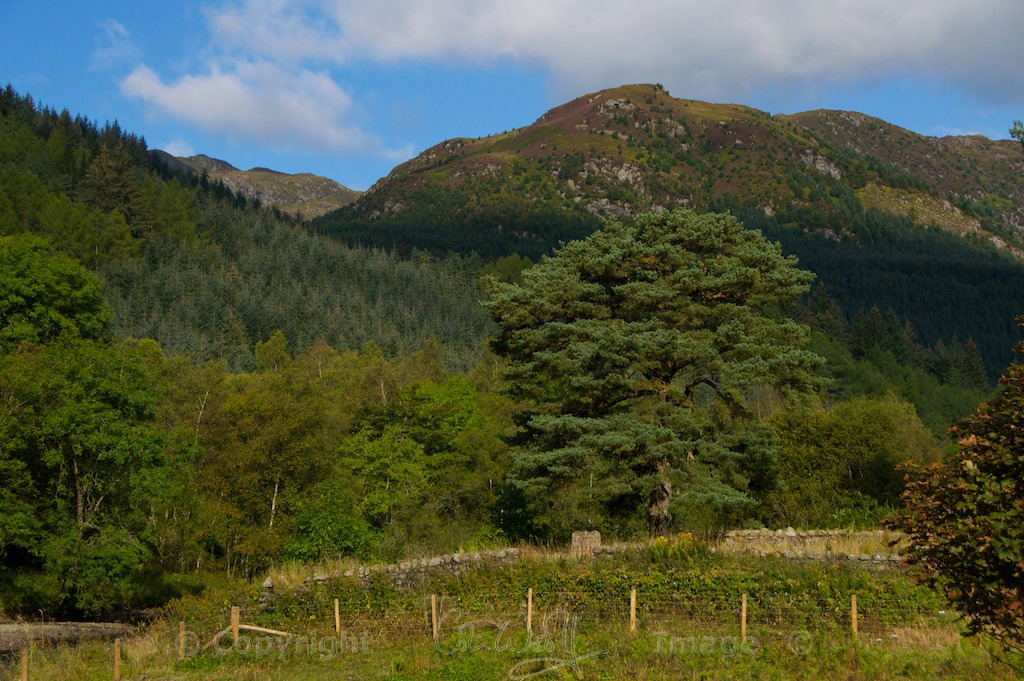 You can read the full feature about St Bride’s here on The Hazel Tree.

For part of their holiday, Jean and Terry had chosen to explore Scotland with Cameron Tours, based in Dunfermline.  We enjoyed talking to the owner/driver, Dave, who has a lot of fascinating information to share about the places he visits.

If you believe that you are descended from the McKinlays in St Bride’s, please feel free to contact me.