When we took a trip over to Ardnamurchan in May, we stopped a few miles west of Glenborrodale and walked down to a beautiful little bay called Camas nan Geall, or ‘the Bay of the Strangers’.

There’s a layby overlooking the bay, and a farm track leads to the field below.  The path runs parallel to the coast and then turns at right angles, heading straight for a fascinating group of archaeological sites:  a Neolithic chambered cairn, a standing stone and a small burial ground.

The setting is nothing short of idyllic.   But it seems that it’s easier to read the geology of the nearby mountains – which is in itself fascinating – than it is to interpret with any accuracy the significance of the stones that were placed here, perhaps as much as 5,000 years ago.

The fact that the RCAHMS considers the burial chamber to be ‘largely destroyed’ pretty much speaks for itself.   A handful of upright stones lean against each other like drunken revellers, trying to support a capstone that has now collapsed;  and a huge flat slab, one of two which are believed to have stood at the entrance to the chamber, lies on the ground just a few yards away.

The second entrance stone has fared better, and appears to be still in place.  Wide at the bottom, it tapers upwards to a rounded point and bears some very interesting markings on its lichen-mottled surface.   To me it appeared almost like a benevolent guardian, although what it once stood to protect has been prised open to the heavens and scattered beyond all recognition.

Small stones litter the ground around the cairn, but it’s impossible to make any sense of them.   Close by are the low ruins of a structure which the RCAHMS describes as a ‘township building’ of a later date, possibly a sheep fank or a byre;  it’s very likely that rubble from the cairn was used in the construction of this.

The burial chamber stands at the end of a row of sycamore trees, which may at one time have marked a field boundary.  They offer a shady processional route, but a modern one because they must be less than 100 years old.  I noticed that the last tree was bending its branches over the site, as if to shield it from public view.   One of the lower branches was curiously twisted, having changed direction to grow towards something unseen.   With hindsight, I am tempted to wonder if the cairn is sited over a blind spring.

About 50 yards further down, even closer to the shore, is another enigma:  a standing stone, inscribed with a cross.   According to several historical sources it seems that the stone itself may have been put there in the Bronze Age, and carved with a cross in the 6th century, or maybe slightly later.   There are, in fact two crosses on its seaward-facing surface – a much smaller one has been squashed in above a carving of an animal.   One site suggests that the animal is a dog, although the combined effects of lichen and weathering have made it pretty indistinct.   If there were ever any carvings on the landward side, they have not survived.

Local tradition says that this stone marks the resting place of an early Irish saint known as St Ciaran (also spelled Ciarain or Kieran), who died in 549 AD – hence its name in Gaelic, Cladh Chiarain, or Ciaran’s grave.  A couple of sources identify him as Ciaran mac an t-Saeir, (‘Ciaran, son of the carpenter’), who was an abbot of Clonmacnoise in County Offaly.  But I was dismayed to learn there were no fewer than 22 saints by the name of Ciaran, and after a little bit of reading I found that St Ciaran of Clonmacnoise instructed his followers to leave his bones on a hillside after his death, rather than preserving them as relics.  So, presumably there was no burial for him.  Nor was he, as far as I can tell, ever linked with Ardnamurchan in his lifetime, although these early saints were known for their wanderings;   there seem to be quite a few churches dedicated to a St Ciaran dotted around Scotland.

The cross-carved stone stands in front of a small rectangular building – or what remains of it.   The RCAHMS says that this is “the burial ground of the Campbells of Ardslignish, 18th century, with lime-mortared rubble masonry enclosing, among other fragments, two fine ogee-pedimented headstones carved with cherubs’ heads.  One stone depicts the Crucifixion… the other, dated 1737, a Campbell coat of arms flanked by reeded pilasters.”

The bay is overlooked by Beinn Hiant, which at 1,700 feet is the highest peak in Ardnamurchan;  its name translates as ‘holy mountain’, but the word ‘hiant’, derived from ‘shiant’, can also mean ‘magic’ or ‘enchanted’.   This may well have been the reason why this secluded place was first chosen as a burial site.  And Camas nan Geall, the ‘Bay of Strangers’… who were they?

The little bay faces south-west across the mouth of Loch Sunart, towards the north-east coast of Mull which has its own standing stones and an early chapel just outside Tobermory.   Maybe we shouldn’t view this site in isolation;   our ancestors were seafarers, and for all we know this could have been a familiar stopping point on a well-travelled and much-loved coastline.

Such tantalising fragments – but it’s like picking up a couple of twigs and trying to make a tree.   You just can’t do it, at least on a purely logical level.   Yet there’s still something about this place.  Flanked on three sides by hills, the green fields of Camas nan Geall feel protected, as if cradled in a cupped hand.  How many tides have come and gone since the first people were buried here?   Maybe that has something to do with it, too.  Ever-present but ever-changing, the water’s edge echoes the line between the known and the unknown, between this world and the next.

Information about visiting Ardnamurchan can be found at www.ardnamurchan.com

Footnote:   A couple of Gaelic-speaking readers have observed, correctly, that ‘geall’ means ‘promises’ and that ‘gall’ means ‘strangers’.   I have queried this point with Anna Nicguaire, a Gaelic speaker who is a professional consultant in the heritage sector.  She confirmed those definitions and spellings, but advised me that many place names have been mis-spelled over the centuries and the mistake is often perpetuated, so that ‘Camas nan Gall’ may have become ‘Camas nan Geall’ on maps and in documents;  but in this case the translation of ‘Bay of Strangers’ seems to have remained constant.   Anna also points out that there is, in fact, a ‘Rubha nan Gall’ – ‘Headland of Strangers’ – on the coastline of Mull, visible from Camas nan Geall.

My thanks to Anna for her kind help.  Visit her website at uiseag.com, where she writes about archaeological sites and many other places of interest. 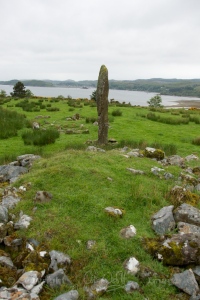