I’ve noticed this pretty little plant growing on the stone walls of places I’ve visited – in fact, wherever there’s a ruined church or castle, ivy-leaved toadflax seems to have secreted itself happily among the crevices.

I always imagined that it had been there since the time of the buildings themselves – but I was wrong.

Ivy-leaved toadflax has only been growing in Britain since the 1600s, and in fact it may have come here as a stowaway, arriving here as seeds on marble statues that were shipped from Italy.   You’ve got to admire its style!  In its native Mediterranean countries it seems to have a long-standing affinity for old places, as suggested by its French name, ‘ruine-de-Rome’.

This is a trailing plant with evergreen leaves – shaped like ivy, as its name suggests.  Its pretty mauve flowers are like tiny snapdragons, veined in deeper purple with a lemon yellow ‘throat’.  It has a long season, flowering from May through to September.

Colonising old stonework is a skill that this plant has honed to perfection.  The flowers are borne on long tendrils that stretch out towards the sunlight, but once they have been pollinated the stalk starts to curve back towards the shade of the wall and the seeds are pushed into a dark damp crevice where they can germinate.

A rock climber in action…

Scaling the walls at Castle Campbell 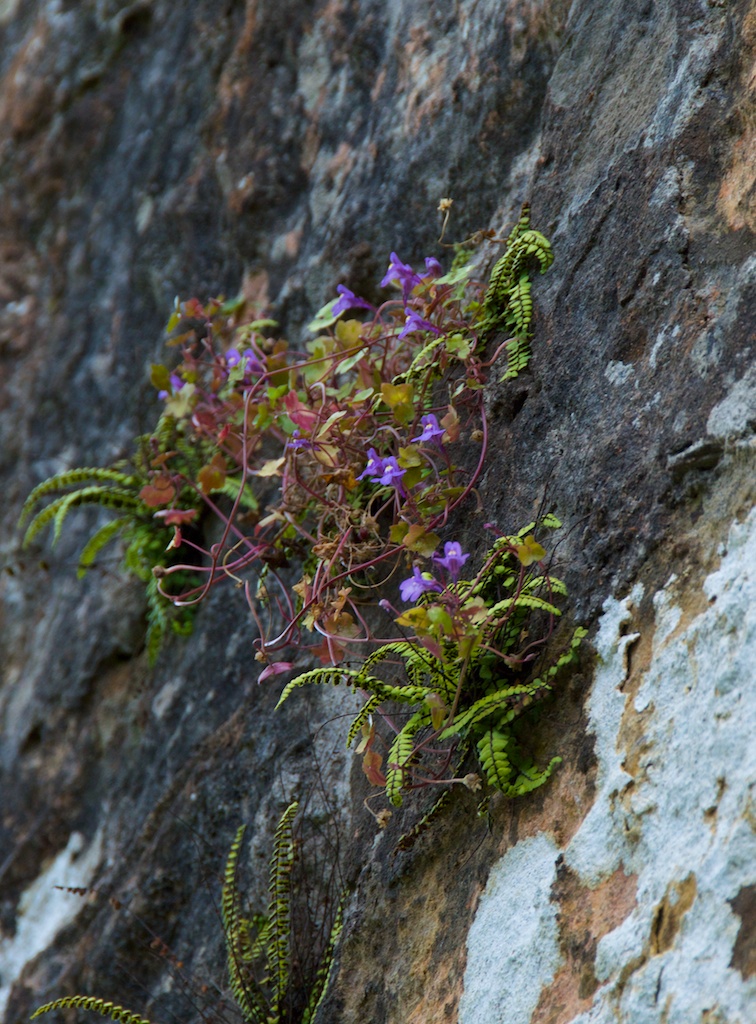 Ivy-leaved toadflax has spread throughout Britain (except the far north of Scotland) and to the United States.   It’s edible, too – in the past it has been eaten as a salad leaf, with a strong taste like watercress.  It is high in Vitamin C and was once used as an antidote to scurvy.

One source I came across suggests that ivy-leaved toadflax offers protection against hostile activity and evil spells – what a shame that it arrived just too late to save many of our wonderful old churches!   In Italy it is known as the ‘plant of the Madonna’, and its flowers always remind me of innocent faces gazing at the sun.

For more spring flowers, take a look at…