When you drive along the wild and lonely road from Kilchoan to Sanna on the Ardnamurchan peninsula, you find yourself passing through a low-lying, almost moon-like terrain that is fringed on all sides by lumpy black hills.

There are no trees or landmarks to break up the flatness, and even the burn which cuts a shallow groove through the landscape seems to be unsure about its sense of direction.

You are, in fact, travelling through the magma chamber of an extinct volcano – or what remains of it.

About 60 million years ago, during the Palaeogene period, “things were far from quiet across the landscape that had just emerged from the bottom of the Cretaceous sea.”   The Atlantic was being stretched as America and Europe drifted further apart, and a line of volcanoes emerged along the western seaboard of Scotland, reaching right up to Iceland and Greenland.

Today, the mountains of Skye, Rum, Mull and Arran all stand as silent witnesses to the formidable power of volcanoes.   But what we are looking at in Ardnamurchan is slightly different, because during the ice ages the top part of this volcano was effectively scoured away by the ice.  It’s barely recognisable from the ground, but from space the picture is much clearer.

“From the air, rings of once molten magma can be seen to define a series of almost perfect circles.   We are looking at the lower reaches of a volcano after the superstructure has been planed off by erosion.”

(‘Land of Mountain and Flood – the Geology and Landforms of Scotland’)

A short distance away, at Sanna, outflows of dark basalt punctuate the white sands, while throughout the peninsula, exposed rocky outcrops glitter with silvery mica.  For geology students, Ardnamurchan is like a textbook on a colossal scale, offering features such as ring dykes, cone sheets, ash flows, and even examples of ‘air-fall’ rocks which were formed from lava that was spat out of the heart of the volcano. 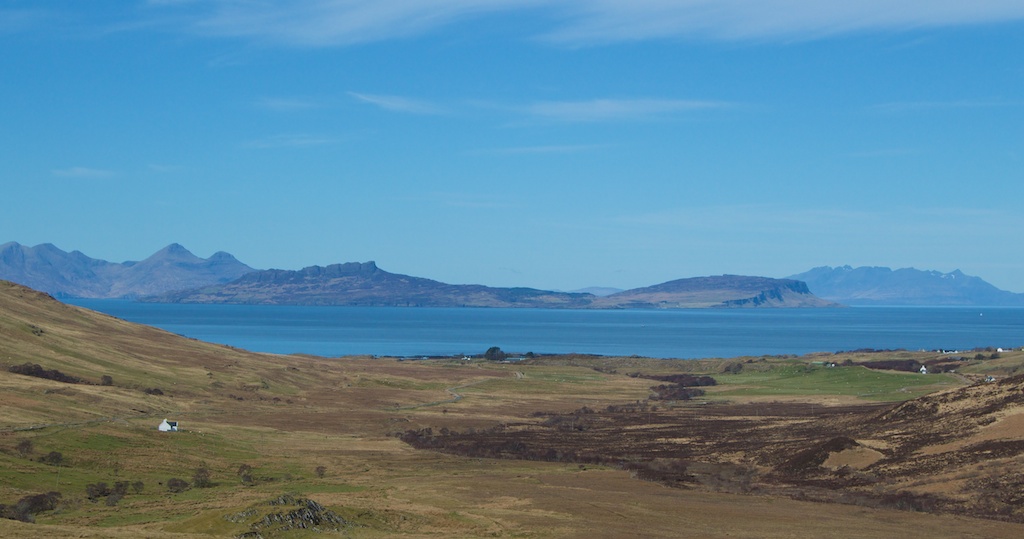 Seen from Ardnamurchan, the islands of Rum (left), Eigg (centre) and the Cuillin mountains of Skye (right)

How to get there

From the Corran ferry across Loch Linnhe, follow the A861 along Loch Sunart to Strontian and Salen.  At Salen, take the B8007, a minor road with passing places, which leads through spectacular scenery to Kilchoan.  A short distance after Kilchoan, look out for the signpost to Sanna, which takes you on an even more minor road (if that’s possible!)   The last stretch of the road before Sanna, around Achnaha, runs through the middle of the volcano.