Sitting high on the moors above Keswick in Cumbria, Castlerigg must be one of the best known stone circles in Britain.

There’s a price to pay for fame, even for a 5,000-year-old monument, and the downside is that when you visit, you can’t really expect to enjoy the place all to yourself.

When we went there on a very windy Friday morning in March, cars were parked along the road in the small lay-by and quite a few people were putting their boots on for the short but bracing walk to the stones.   As we went through the gate, a film crew and two presenters were walking back to their car;  a party of visitors were arriving from the right;  and a few more were already scattered in twos and threes about the stones themselves, enjoying a flask of tea and taking in the views.

But after less than 10 minutes they had all disappeared.

There wasn’t anything paranormal about this.  The wind was numbingly cold, barrelling down from the surrounding fells where patches of snow were the only highlights in a steel grey landscape.  It felt like a force nine gale, and you had to lean into it to stop yourself falling over.  Standing or sitting still wasn’t an option for very long.   After taking a few photos from various angles, even Colin gave in and retreated back down the hill.

Finding myself the temporary mistress of Castlerigg, I thought I would make the most of it, even if my fingers dropped off afterwards.  (I know this is possible, because I’ve been writing about polar explorers recently).

I walked around the stones, weaving my way in and out, and giving them a little pat every now and again.  On the south-eastern rim of the circle, but still within it, is a smaller enclosure of stones about 24 feet by 11, roughly rectangular.  According to various websites this is called a ‘cove’, although I’m not sure whether this word is unique to Castlerigg.  For some reason, I didn’t want to walk in this at all, and found myself apologising to no one in particular when I stepped in it accidentally.   (Very soon they will be calling me ‘the mad woman of the stones’, and to be honest I certainly looked like one when I got back to the car.)

This is the cove, seen from various angles:

Castlerigg is thought to have been built around 3,200 BC, making it one of the oldest megalithic sites in the UK.   It’s believed that there may have been 41 stones originally, of which 38 remain;  all are glacial erratics, composed of slate.  The tallest stones are well over nine feet high, and the site is about 35 yards across at its widest (it is a slightly flattened circle).   It lies 700 feet above sea level.

Some archaeologists have claimed to see the very faint traces of carvings on a couple of the stones, but you need to be persistent, and have the right kind of lighting, in order to see what they mean.  Perhaps an ant, making his leisurely way across the face of one of them, might find a gentle rise and dip like a wave on the sea.   There are some good photos of the possible markings at www.stone-circles.org.uk.

What I saw myself was that some of the stones have strata or natural lines of fracture that run around, up or across them, creating interesting patterns. 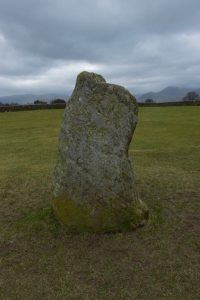 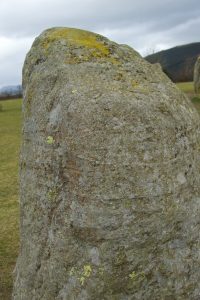 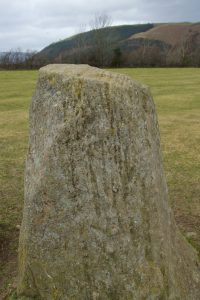 The edge of this stone looks to have been damaged, perhaps by frost, and a fresh surface of much darker slate has been exposed.   In this climate, lichens will soon take a hold.

Glowering down on Castlerigg from all sides are some of the Lake District’s most famous fells – peaks with ancient names like Skiddaw, Blencathra, Clough Head and High Seat, and Helvellyn beyond.  It feels like a natural amphitheatre, but sadly the actors left the stage a long time ago.  An old name for it is ‘Keswick Carles’, suggesting that the stones represent a group of men who have been quite literally petrified; this idea crops up quite often in stone circle folklore.  (The Old Norse word ‘karl’ simply meant ‘a man‘ or a freeman). The ‘castle’ element may in fact stem from a mistake by the 18th century antiquarian William Stukeley, who misread ‘carles’ for ‘castle’, while ‘rigg’ is an old word for ‘ridge’.  Locally it is also known as the Druids’ Circle.

Stukeley had a slightly distorted idea about the creators of the site, but his description is still vivid:

“These desolate and hilly regions were the retiring places of the Britons from the power of the Romans;  which perhaps is the reason of the great number of temples scattered throughout the country;  for a mile before we came to Keswick, on an eminence in the middle of a great concavity of those rude hills, and not far from the banks of the river Greata, I observed another Celtic work, very intire:  it is 100 foot in diameter, and consists of forty stones, some very large.  At the east end of it is a grave, made of such other stones, in number about ten:  this is placed in the very east point of the circle, and within it:  there is not a stone wanting, though some are removed a little out of their first station:  they call it the Carfles, and, corruptly I suppose, Castle-rig.”

‘Itinerarium Curiosum or An Account of the Antiquities and Remarkable Curiosities in Nature or Art Observed in Travels Through Great Britain’, by William Stukeley MD FR & AS, 1776

Despite Stukeley’s optimistic suggestion of a grave, the only archaeological finds from Castlerigg consist of an axe head, picked up inside the circle, and a quantity of charcoal found within the ‘cove’.

Occasionally, visitors to Castlerigg have reported seeing strange lights moving from stone to stone, while others have heard chanting coming from within the circle.   In 1919 a Mr Singleton had a startling experience while walking close to Castlerigg late one night.  He describes seeing a rapidly moving light, as bright as a bicycle lamp, travelling at right angles to the road about 200 yards away from him.  Having crossed the road, it disappeared, but then a number of lights appeared slightly further away, moving backwards and forwards horizontally in the area of the stone circle.

“Whilst we were watching a remarkable incident happened:  one of the lights, and only one, came straight to the spot where we were standing;  at first very faint, as it approached the light increased in intensity.  When it came quite near I was in no doubt whether I should stoop below the boundary wall as the light would pass directly over our heads.  But when it came close to the wall it slowed down, stopped, quivered, and slowly went out, as if the matter producing the light had become exhausted.  It was globular, white, with a nucleus possibly 6 ft or so in diameter, and just high enough above the ground to pass over our heads.”

More recently, in 2012, the Worsley Paranormal Group went there with radio receivers and conducted an EVP (electronic voice phenomenon) experiment.   Above the wind, they detected faint signals like a ‘tuning in’ around certain stones, and when they slowed the recording down it sounded a bit like human voices.

Some observers have thought that the shapes of the stones reflect the larger shapes of the surrounding hills, and this may not be a coincidence.  I myself noticed (even though my eyes were streaming by that time!) that the largest stone has a profile that resembles the hill to the south, in miniature.  But, of course, only when seen from a certain angle!

Writing in ‘The Stone Circles of the British Isles’, Aubrey Burl suggests that Castlerigg, like many other stone circles in Cumbria, was positioned on ancient trackways used by traders of stone axes:  “The Carles is magnificently placed for travellers coming northwards down Borrowdale either to go north-west along Derwentwater or to turn east towards the Penrith henges, themselves built at the focus of the mountain pass and river junction.”

At the autumn equinox, the sun rises over the top of Threlkeld Knott, a hill two miles to the east.  Other stones in the circle have been found to align with the midwinter sunrise and various points of moonrise and set.

One thing hasn’t changed about Castlerigg – it still attracts people to it, and they come from all directions, walking down from the fells as well as from the road.  It’s not a gentle place but it’s exhilarating, especially when your breath is being whipped away by the wind and your fingers are raw with cold.