Since September last year I have been doing some research and writing for the Royal Scottish Geographical Society, which has its headquarters in Perth.  The work is fascinating in itself, but so is the building that the Society ‘lives in’…

Founded in 1884, the Royal Scottish Geographical Society occupies two adjacent properties, known as the Fair Maid’s House and Lord John Murray House.  They are tucked away down North Port, a cobbled street which leads from Blackfriars Wynd towards Horsecross and the newly-built Concert Hall.

The houses each have their own fascinating story to tell, and the Fair Maid’s House in particular is just so pretty.  But there’s more to this place than just a charming exterior.  There’s a relic from a medieval monastery, and the memory of a gruesome royal murder…

Dating back to about 1475, this delightful little house is the oldest secular building in Perth.  Its name is more recent, being derived from ‘The Fair Maid of Perth’, a novel published in 1828 by Sir Walter Scott.  In his story, this is the home of Simon Glover and his daughter Catharine, the ‘Fair Maid’.  Scott must have known something about the history of the house, because from 1629 this was the headquarters of the Glovers’ Incorporation, whose motto ‘Grace and Peace’ is carved above the door.

“He wrapped himself in his cloak, and hastened through the still silent streets, determined to appear at the window appointed a little before dawn.  With this purpose he passed up the High Street, and turned down the opening where St. John’s Church now stands, in order to proceed to Curfew Street; when it occurred to him, from the appearance of the sky, that he was at least an hour too early for his purpose, and that it would be better not to appear at the place of rendezvous till nearer the time assigned. Other gallants were not unlikely to be on the watch as well as himself about the house of the Fair Maid of Perth; and he knew his own foible so well as to be sensible of the great chance of a scuffle arising betwixt them.”

A passage leading off North Port is called Curfew Row, and it has been suggested that the little niche in the wall of the Fair Maid’s House, underneath the eaves, once housed Perth’s curfew bell.  There is an intriguing stone set in the ground at the corner, which to me looks like an ancient boundary stone.

Sir Walter Scott’s novel became so popular that parts of the building were altered in 1893 to conform with readers’ expectations.   The carving of ‘Grace and Peace’ above the doorway has a distinctly Victorian style, and a stone in the circular stairwell was rather misleadingly inscribed with the date ‘1393’.

“The arcaded frontage, which is in-filled by modern windows, may be a rare survival from a medieval merchant’s house.”   RCAHMS

Although it’s known as Lord John Murray’s ‘house’, this 18th century property was once the stables for Murray’s townhouse which stood nearby.   Born in 1711, Lord John Murray was a half-brother of the Jacobite leaders William Murray and Lord George Murray – but he seems to have held different sentiments entirely, because he became a colonel in the 42nd Royal Highland Regiment known as the Black Watch.  This was the force that was set up by the British government to keep control of the clans after the 1715 Jacobite uprising.   Murray served as a Member of Parliament for Perthshire between 1734 and 1761.

“Though a conscientious commander and proud of his regiment, he was by no means popular with the Perthshire freeholders, who thought he neglected their interests by remaining in Scotland in November 1759, instead of presenting their case to Parliament on the distilling bill.”  (History of Parliament Online)

‘Sketch of the medieval monastery of the Blackfriars, now lost’ from The Ancient Capital of Scotland, Vol. 1, London, published 1904 (image via Wikimedia)

In between Lord John Murray’s House and the low building that now joins it to Fair Maid’s House is a wall that was once part of a medieval monastery.  In 1231 a Dominican Friary was founded in Perth by Alexander II of Scotland, and by 1450 the Friary had expanded to occupy quite a considerable area of land.  Several buildings were ‘feued’ or leased to tenants, and this led to the creation of Perth’s first medieval suburb.

In 1537 the property that stood here was occupied by Andrew Bunch, Burgess of Perth and Baillie to the Prior and Brethren at the Friary.  Although the friars took an oath of poverty, the monastery itself would have been wealthy from the donations of rich local landowners.  It all came to an end in the mid-1500s, however, when the Friars were driven out of Perth by the rough winds of the Reformation.

On the face of the wall which is visible inside, the remnants of two fireplaces are visible;  next to one of them is a small recess for storing salt.   According to historians, the different levels of fireplaces, with an older one below and a more recent one above, attest to the gradual silting up of the area as the River Tay repeatedly burst its banks.

James I and a murky death…

James I, from a painting in the National Portrait Gallery, Edinburgh (unknown artist, image via Wikimedia)

James had been King of Scotland in name since 1406, but his coronation only took place in 1424.  This was because he had spent much of his youth on an extended ‘holiday’ in England, as a hostage of Henry IV and V respectively;  when the Scottish nobles eventually raised a ransom to bring him back, James set about governing his country with an iron hand, and it didn’t go down very well at all.  Among his staunchest opponents were Sir Robert Graham and Walter Stewart, Earl of Atholl.   They started to hatch a dastardly plot.

In February 1437 James was staying at his lodgings in the Blackfriars’ monastery with his wife, Joan Beaufort.  Towards midnight on 21st February, as James chatted to the Queen and her ladies in waiting, a commotion was heard in the passage outside.   There was no other exit, so one of the Queen’s ladies tried to bar the door while James levered up some floorboards with a poker from the fire.   Below the floor lay a cellar that contained a sewer.  James leapt down there and the ladies hastily replaced the boards;  seconds later the door was burst open with a force that broke Catherine Douglas’ arm.  (From that day, she would always be known as ‘Kate Bar-lass’.)

If it hadn’t been for one ridiculously random decision, James might have survived.  But the day before, he had been playing tennis on the court outside, and the balls were constantly being lost up the end of the sewer – so he’d had the opening blocked up.  His escape route was therefore sealed off.

At first, his assassins were fooled by his absence and rushed off to look elsewhere.  But James, assuming by the silence that he was safe, started to shout for help… and they heard him, and returned.   This time they pulled back the boards and stabbed the King to death.  Queen Joan fled to Stirling Castle with her six-year-old son, who was now James II.

It didn’t go well for the Scottish nobles after that, because the support that they had been depending on disappeared.  Murdering anyone, but especially the King, was asking for trouble, and most of them got it, in gruesome medieval fashion.   But the fate of James I seemed to set the seal on the fortune of his descendants, and every Stewart monarch, from James II to V and Mary Queen of Scots, led a troubled life and died an untimely death.

The actual spot where James was assassinated has long since disappeared, and shops and houses now cover most of the ground where the Blackfriars’ monastery once stood.  From time to time, building work in the surrounding area has turned up new evidence of ancient foundations and burials;  but the wall inside the RSGS building is the only part of the monastery that remains standing above ground.

With roots that stretch back to 1884, the Royal Scottish Geographical Society is an educational charity which promotes an understanding of natural environments and human societies, and how they interact.

The upper floor of the Fair Maid’s House has been transformed into the Explorers’ Room with an extensive library, and there are further rooms housing maps, archives and exhibitions.  The education centre is available for the benefit of individuals, schools and research groups.

For information about joining the RSGS, visit www.rsgs.org

As for my own work for the RSGS, I’ve been writing articles about people who have received the Society’s Livingstone Medal, which was first awarded in 1901.  Holders include Shackleton, Scott, Amundsen, and some lesser-known but fascinating people like Mildred Cable, Alan Cobham, Hubert Wilkins, Frank Kingdon Ward and Wilfred Thesiger;  and then there are the more recent winners such as Sir David Attenborough, Sir Ranulph Fiennes, Rory Stewart, Michael Palin, Tim Severin and John Blashford-Snell.  I am having such fun!   Some of these articles may be published in forthcoming issues of The Geographer.

Update, 17th June 2015:  I’ve set up my own blog to share some of my findings, and I’m working towards a book.  Take a look at Explorers of the RSGS! 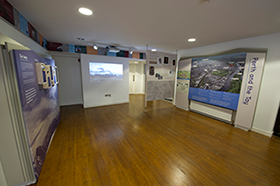 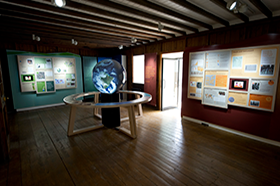 Anyone is welcome to visit the Fair Maid’s House.  In 2015 it will be open from 7th April to 24th October, Tuesday to Saturday, from 1.00 to 4.30 pm. Groups can request a special visit at other times.  The centre is manned entirely by volunteers, so if you are planning a special journey you may wish to contact the RSGS in advance to check that it will be open.  Rooms can also be rented for small functions.  Contact enquiries@rsgs.org or 01738 455050 for further information about visiting, or to ask about being a volunteer guide.