In the middle of East Lothian, surrounded by rich farmland, is the pretty village of Athelstaneford.

For me, the name ‘Athelstaneford’ evokes the wooded country lanes, rolling farmland and clear streams of Hampshire and Dorset – the heartland of the ancient English kingdom of Wessex.

So what on Earth is a name like Athelstaneford doing in eastern Scotland?

No one really knows for certain… but the answer is woven into the legend of the saltire, Scotland’s national flag.

Let’s look at the legend first!

In 832 AD, Athelstan, king of the Angles, gathered an army and marched northwards through Northumbria, meeting the king of Pictland, variously called Oengus, Angus or Hungus, in East Lothian, a couple of miles north of the village that now bears his name.

The evening before the battle Oengus prayed for victory, as did all rulers of that time; in particular he directed his prayers to St Andrew, whose sacred relics lay in the church of St Rule.  Oengus vowed to make St Andrew the patron saint of Scotland if he was victorious.

That night, St Andrew appeared to him in a dream, and revealed to him the diagonal cross on which he had been martyred, gloriously displayed in the heavens – a diagonal white cross against a blue sky.  (Contrary to some reports, this phenomenon wasn’t caused by the contrails of high-flying jets!)

In the ensuing battle Oengus triumphed over Athelstan, despite the odds being stacked heavily against him.

And now the history…

That is a great story, but the sad fact is that history just doesn’t back it up.  For a start, Athelstan wasn’t born until 895 AD, some 60 years after the battle;  and instead of being king of the Angles he was the first king of England.  Moreover, he went on a comprehensive campaign in the north, forcing King Constantine of Scotland to submit to his rule;   and when the Scottish king rebelled, Athelstan led English forces to victory against an army of Picts, Scots, Vikings, and Strathclyde Britons at the Battle of Brunanburh in 937.

So if Athelstan never came to Athelstaneford, how did it get its name?   Some kind of battle must have been fought here, because a field nearby is still known as ‘the bloody lands’.   The thing is, no one really knows.   It has been suggested that the name incorporates the Gaelic words ath-ail-stane, meaning ‘stone ford’.   I’m more tempted to believe that Athelstan really did come here, but in the 10th century, not the 9th;  and perhaps a battle took place that is now lost to history.

From the dogs of war to the doves of peace

This brings me to the dovecot (or doocot, as they are known in Scotland).

Just behind the church in Athelstaneford is a beautifully restored doocot, which was built by George Hepburn in 1583;  his initials are engraved on the lintel above the door, although the inscription is now very weathered.  Earlier that century, James IV had ordered all landowners to put ‘dowcots’ on their land, to benefit the local community.  Especially in winter, doves provided an important source of food in the form of meat and eggs;  their droppings made good fertiliser, and were also used in the process of tanning leather.

Shortly afterwards, James IV had to amend his Act of Parliament slightly, because everyone wanted a doocot!   He specified that they should only be erected when the owner had sufficient surrounding land for the doves to feed on, so that they didn’t spoil the crops of a neighbouring farmer.

Athelstaneford’s doocot overlooks open farmland, where the disputed battle ground lies hidden among fields of wheat.  It walls are harled – coated in a traditional mix of lime and mortar – and there are two string courses of projecting flagstones, designed to stop rats from climbing the walls.   Its shape is said to be lectern-style, with a crow-stepped roof for the doves to perch on, and the slope faces south to make the most of the sun.  Half-way up the roof is a row of small entrance holes.

You have to stoop to go through the low doorway, and as you peer up in the darkness you can see the walls are still lined with nest boxes.   How many birds would have lived here?   According to the Royal Commission on the Ancient and Historical Monuments of Scotland:  “There were once perhaps 600 nests, but only 52 remain.”

The doocot now houses an interactive exhibition which projects images onto the dark walls, and a recording tells the story of Athelstan and Oengus and their legendary battle.  Outside, a saltire flies from a flagpole.   It’s a quietly understated place, but it lies at the heart of Scotland’s identity. 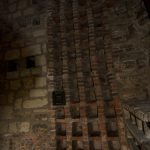 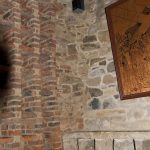 As you drive around East Lothian, you realise that doocots are everywhere, in all shapes and sizes, some well conserved and others in ruins.   Historically, the farmland must have been some of the richest in Scotland, supporting some wealthy landowners.  But why have so many doocots survived, when sometimes the great houses themselves have gone?   A clue might lie in an old folk tale that says the destruction of a doocot will result in the death of the lady of the house within a year.   No wonder no one wanted to take the risk.

Our visit to Athelstaneford, primarily in search of a battle site, has opened my eyes to a different and delightful aspect of Scotland’s history, and I’m now keen to see more doocots, especially if some still have ‘doos‘ residing in them.  These old places are beautiful examples of architecture in miniature, but the boxes that still line the walls are sadly empty.  It would be lovely to see and hear the doves inside them, although at Athelstaneford they would make a bit of a mess of any exhibition going on in there!

Visiting the doocot at Athelstaneford

Athelstaneford lies just to the north of Haddington – you can turn off the A1 and follow the signs to the village.   The exhibition inside the doocot is organised by the Scottish Flag Trust, and the building is open daily from April to October, as well as St Andrew’s Day (30th November).

There’s a lectern-style doocot standing outside Tantallon Castle, not far from Athelstaneford, which you can read about here on The Hazel Tree.