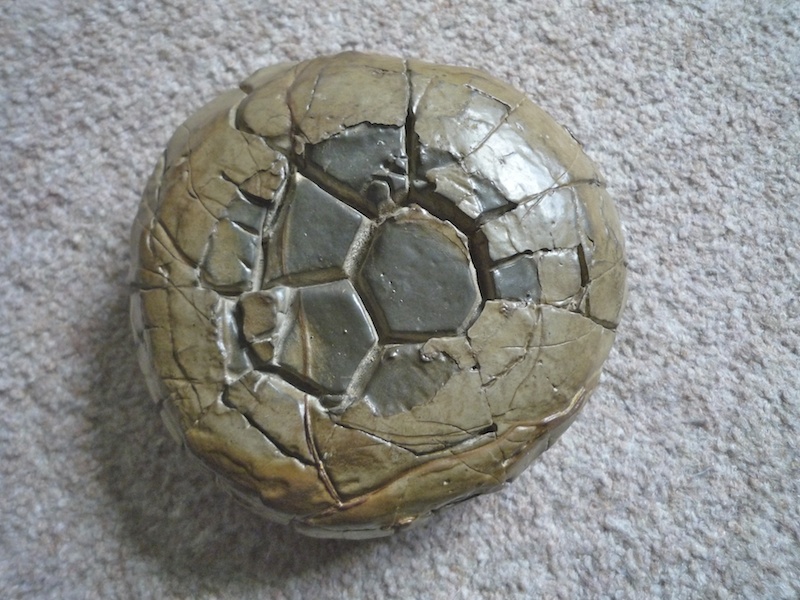 A while ago on The Hazel Tree – almost a year ago to the day, in fact – I posted a fun quiz, asking you to identify a mystery object.

This was a septarian nodule, a strange-looking geological formation created millions of years ago when clay or mud settled around a nucleus – which could be the shell of a crustacean.   This lump later dried out and cracked when it was exposed to the air.   Later still, some kind of mineral-bearing liquid seeped into the cracks, lining them with crystals, which you might see if you broke it open.

I bought this septarian nodule at a rock shop in Ingleton, West Yorkshire (sadly, the shop has since closed).

Little did I imagine, wandering around the beach below Tantallon Castle a couple of weeks ago, that I might pick up another.

There it is… half-submerged in wet sand.   I could hardly believe my eyes, although I didn’t at first know what it was.

But when I posted a photo on Twitter with a request for help in identifying it, members of the Geological Society of London told me they suspected it was either a septarian nodule or a septarian concretion (and to geologists there is a fine distinction between the two).

They suggested that the base rock was some kind of mudstone, and that a mineral such as quartz was filling the cracks.  Apparently, these are quite common in East Lothian.

So, here it is… my new precious!

Tantallon Castle is worth a visit in any weather (unless it’s blowing a gale!)  Click on the photo to find out more.