In the Scottish Borders the minor roads seem to wind their way forever around the low rolling hills, following river valleys and then slowly climbing to reveal views of rich farmland.

A few miles to the east of Lauder are two stone arches, set about a mile or so apart on the same road.   I have looked for information about them online, but there is very little available.   I believe they date from the 1700s, and I can only imagine that they were put up to mark the boundaries of an estate. 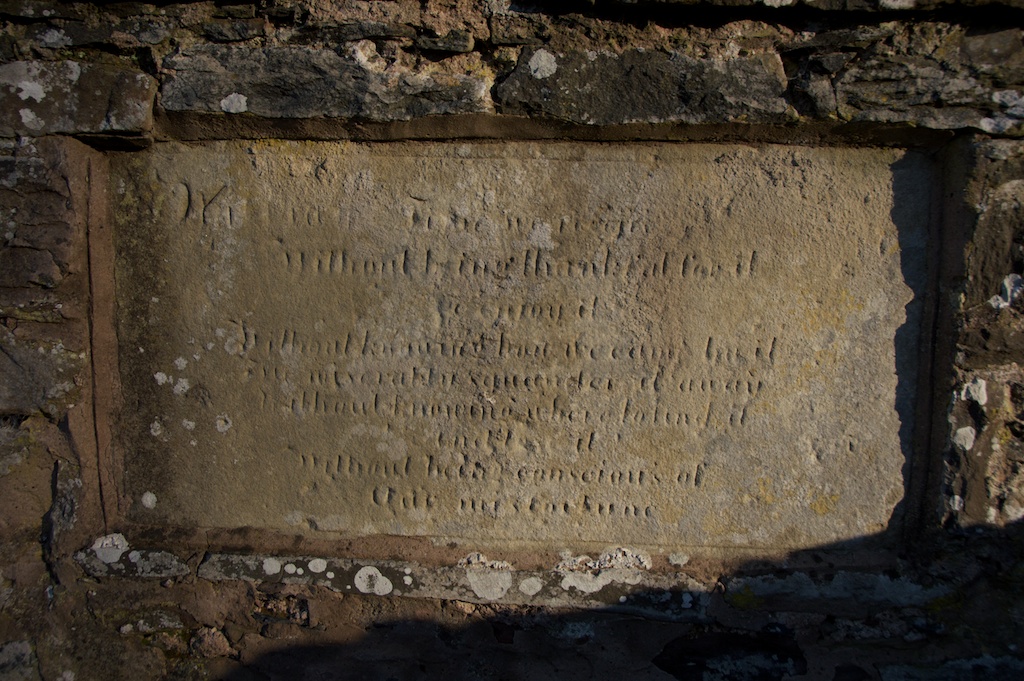 I noticed that the first arch had an inscription carved in the base of each pillar.   The words are badly weather-worn, but I took a photo of the one that wasn’t in shadow in the hope that I could decipher it when I got home.   After a few attempts I made out the following lines.  If you can add or amend anything, or if you know any more about the history of the arches, please let me know!   (Clicking on the image will enlarge it.)

I haven’t heard these words before, and I wonder what led someone to have such a salutary warning set in stone.   It was impossible to make out the words on the other side of the pillar, as they had been worn almost entirely away.

It’s surprising what you come across along country lanes!

I have heard from the Borders Family History Society, who have kindly shared the following information:

“Spottiswood House was ‘Jacobethan’ style, huge, and built 1832-4 by the architect William Burn. The Gothick archways at Pyatshaw and Bruntaburn were part of its policies and landscape, and the various inscriptions are the work of Lady John Scott (Alicia Anne Spottiswood), a noted antiquarian who excavated a number of burial mounds in the area.

The magnificent house was demolished as far back as 1928.”

I found an old postcard with a view of the house on the Dunse History Society website.    In the opinion of the RCAHMS, “It is very likely that the first house of Spottiswoode was a tower-house of late medieval date”, but this original building was obviously much altered by successive generations.

Peter Munro, the Chairman of the Borders Family History Society, has found the wording of the inscription in a 1770 copy of the Town & Country Magazine (see also his comment below).

I’m indebted to the Society’s secretary, Ronald Morrison, and to Peter Munro and their committee for helping me with this mystery.  Since my own maiden name was Scott, I am even happier!   The Scotts were one of the predominant families of the Scottish Borders.  It seems that Alicia Anne’s family name, Spottiswood, has roots that go back to the 13th century, to the reigns of Alexander III and Robert the Bruce.