In 1160, the Augustinian canons who had taken over the incumbency of St Rule’s church at St Andrews began to lay the foundations for a much larger building on the same site.

The Cathedral took almost 150 years to build, and it was consecrated in July 1318 in the presence of Robert the Bruce.  Bad weather had prolonged the construction work – the west wall was blown down in a storm in 1272 – and during the first War of Independence with England some of the lead was stripped from the roof.  But when it was finally ready to receive worshippers it must have been a spectacular sight, one which I would love to have seen. 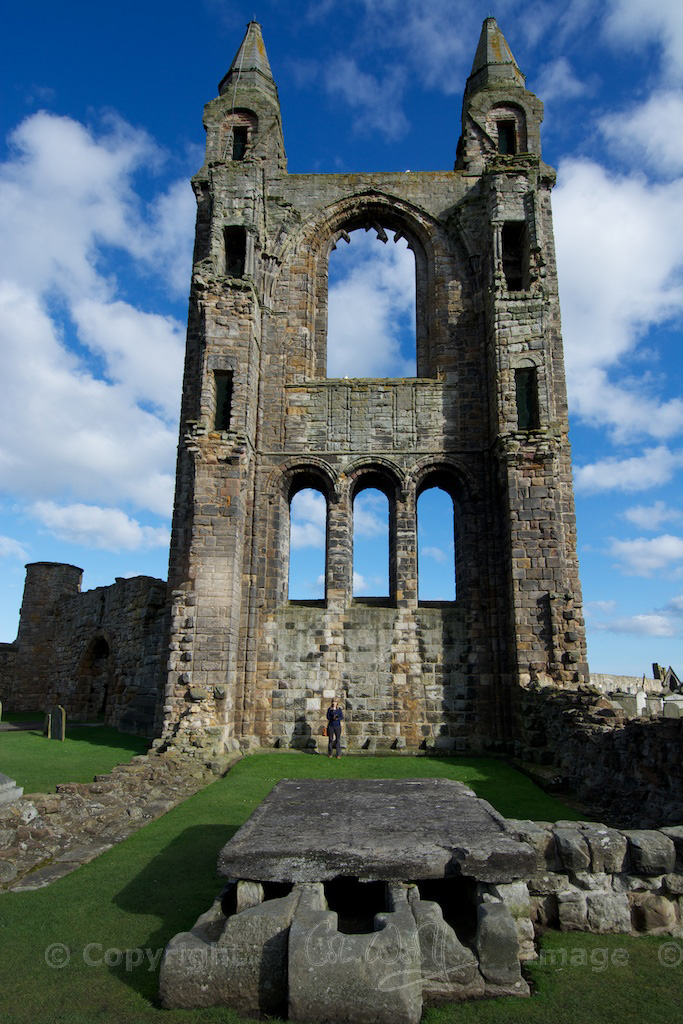 The new building was ambitious in its magnificence, designed to be worthy of the precious relics of St Andrew which were attracting thousands of pilgrims from all over Europe.   No simple, unadorned walls for the Augustinians:  Gothic arches are everywhere, blind arcading on the walls, wonderful tracery in the windows.  Even now, we can see how spectacular it was;  this was Scotland’s largest church, and the architecture was unsurpassed at that time.

Within the grounds of the Cathedral was a priory to house the canons;  this consisted of a cloister, a chapterhouse, a refectory, dormitories, kitchens, a mill, a tithe barn and guest houses.  There was also a ‘warming house’, where the canons were allowed a fire to warm themselves.  Even the gateways were elaborate:  an ancient street known as the Pends led to one of the entrances within the boundary wall.  This is still standing, its old stone arches reaching gracefully over the heads of passers by.  The website Scottish Churches explains:

“It was an impressive structure, with a groin vaulted roof, moulded pointed archways and blind arcading above.”

In fact, it still is an impressive structure, enough to stop you in your tracks even when the breathtaking grandeur of the Cathedral is looming just across the road!

The first significant part that you come across on entering the Cathedral grounds is the west entrance with its embellished archway.   Above it and to the right, a long finger of stonework juts ruggedly skywards.  At first glance this looks like a narrow tower, but if you stop for a minute or two you can see that it formed one side of the original wall.  Aligning yourself with the opposite end, which is in better shape, gives you a better perspective. 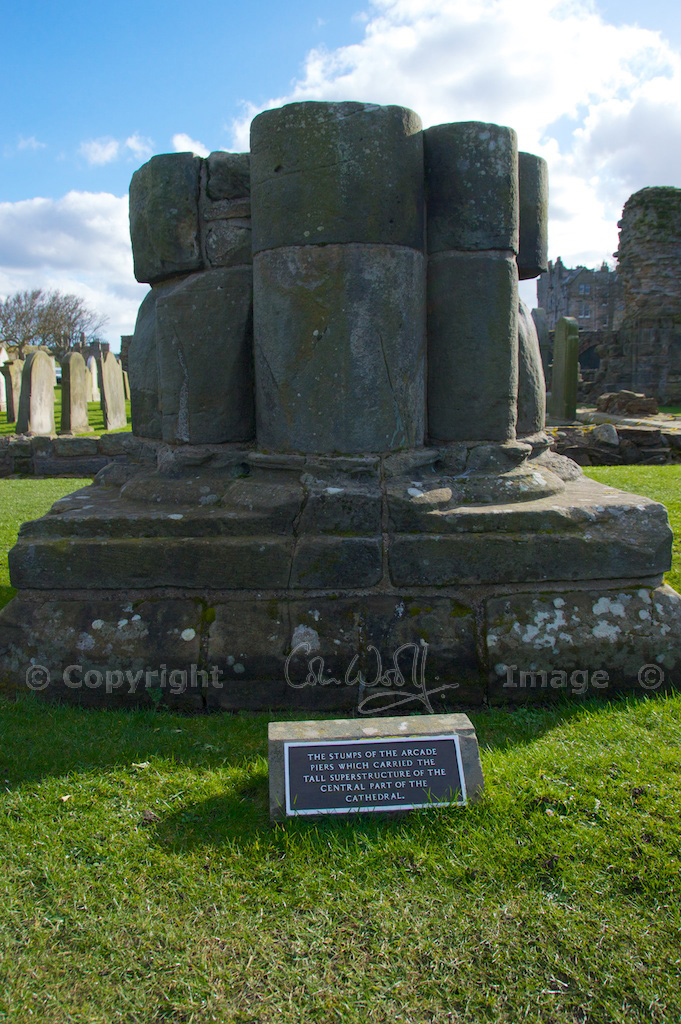 The nave was aisled;  only the stumps of the massive supporting columns now remain, but you can stand among them and imagine the experience of walking up the nave from the west entrance, those colossal pillars rising around you amid the shadowy stillness.

Nothing of the original floor can be seen:  the ground is covered in a lush carpet of grass, although this isn’t a place where sheep can safely graze!   Open tombs are dotted around, some of them quite deep, and it pays to watch your step.  I imagine that Priors and important dignitaries of the Cathedral would have been buried here.  The website of Scottish Churches confirms this:  “A tomb at the east end of the south choir aisle is believed to be that of Bishop Wardlaw.”

Perhaps luckily for us, the tombs are now empty of their original occupants.  Some are still partly shielded with capstones while others gape open to reveal body-shaped recesses within.

The Cathedral was cruciform in shape, and a single tower rose above the crossing (where the nave and transepts meet).   The tower was higher than that of nearby St Rule’s Church, and it must have been a breathtaking sight – but one that is now sadly lost to us.

Above the five-bay choir stood the grand east wall, most of which is still intact.   Originally this had three storeys of round arched windows but in the 15th century they were replaced by a single massive window with ornate tracery.   It’s fascinating to make out the ‘ghosts’ of smaller windows which are still visible on the wall.

When we visited in mid-March, pairs of fulmars were already choosing their nest sites high in the stonework, declaring their happiness loudly to each other and preaching very noisy sermons to prospective intruders. 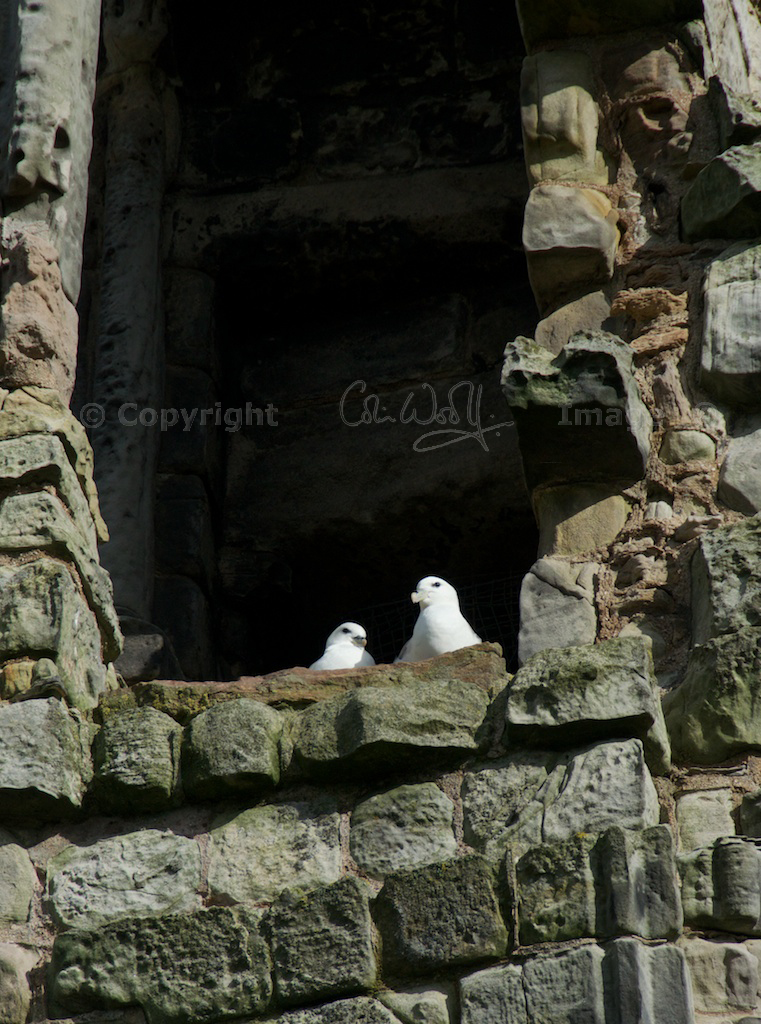 It takes a lot to reduce a Cathedral to ruins, especially one as important as St Andrews.   This was the seat of Scotland’s leading bishops, described by Historic Scotland as our “largest and most magnificent medieval church”.  So what on earth brought it to such a state?

Despite being damaged by an accidental fire in 1378 and winter storms in 1409, the Cathedral was repaired each time and restored to its glory.   It did not, however, survive the attention of a Protestant mob whose fury had been inflamed by the preaching of John Knox in a nearby church.   Everything symbolic of the Catholic faith was destroyed, including stained glass windows, furnishings and adornments.  The relics of St Andrew – sacred fragments of bone – were lost, and the friars were expelled.

Over the succeeding centuries, it’s likely that further storms took their toll on the neglected structure, and any stonework that was lying around was plundered for local building materials.   According to the Scottish Churches website, “In 1826 the Barons of Exchequer took possession of the ruins and had the remains preserved and consolidated. The rubbish and piles of masonry debris… were cleared away and the grounds were laid with turf.”

How ironic that the older St Rule’s Tower, simple and unadorned, has survived pretty much unscathed;   obviously not posing any type of offence to the Reformers, it was left well alone, and it has withstood the weather extremely well.   At first glance, in fact, this looks to be the most recent structure!

St Rule’s Tower, with the east wall of the Cathedral on the right

An extensive graveyard lies to the north and east of the Cathedral, and through an arch in the boundary wall you can walk onto the sea front where low cliffs drop down onto the shingly beach below.  The Prior of St Andrews and his flock certainly enjoyed some amazing views. 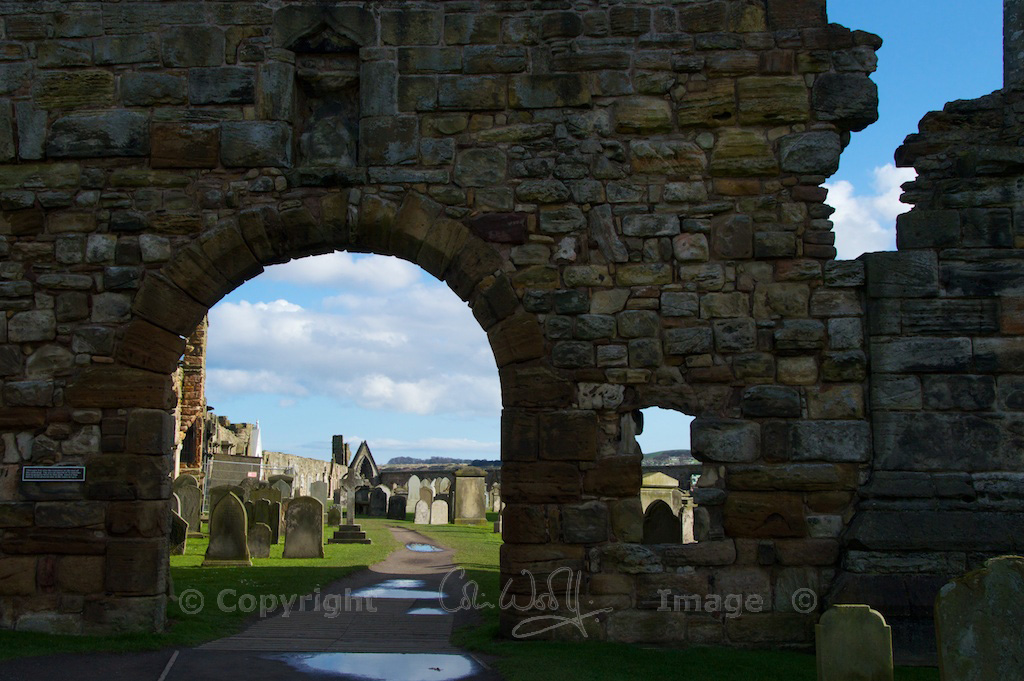 As you wander around the ruins and try to gain a more complete picture of the Cathedral’s former grandeur, you can’t help but feel a sense of sorrow at the loss.   This church was once the pride of Scotland’s kings, but now its bones seem to have replaced those of St Andrew, exposed to the elements, spirits and spirituality withdrawn into a skeleton of stone. 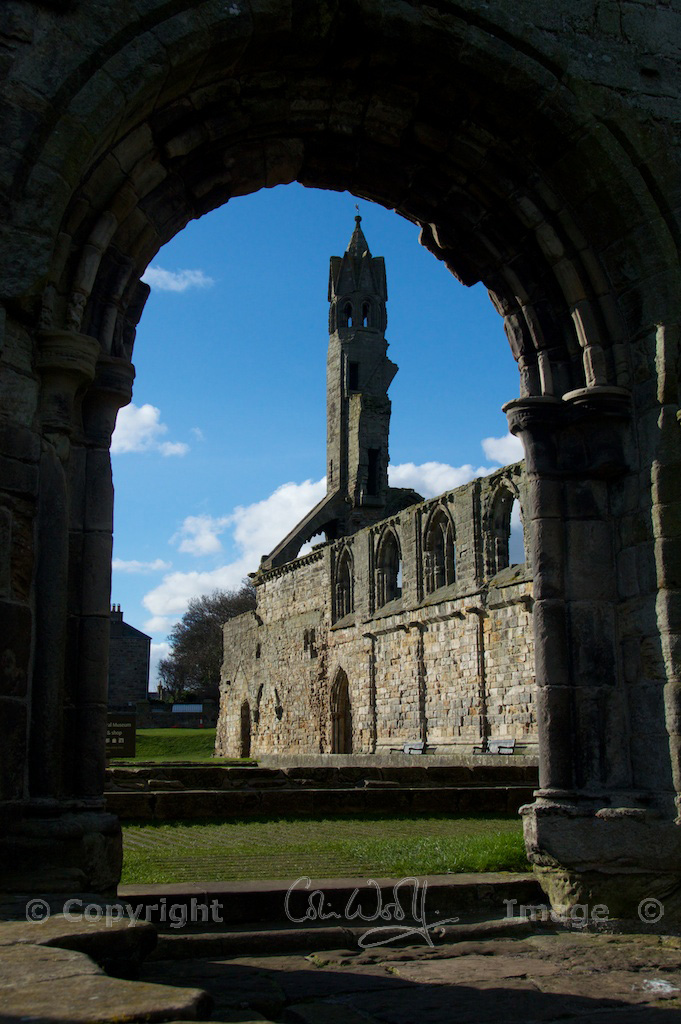 St Andrew’s Cathedral and St Rule’s Tower are in the care of Historic Scotland.  Admission prices and opening times are available on their website.

The Tower of St Rule

Close to the Cathedral stands the astonishing St Rule’s Church and Tower, founded by a community of Culdees.

Also take a look at…