Like little drops of sunshine, the pale yellow flowers of primroses start appearing in March, adorning our fields, banks and hedgerows.   I love the way they unfurl:  buds that look like loosely-folded umbrellas open out to reveal five heart-shaped petals and a cadmium yellow centre.

Very soon, they will be joined by violets and wood anemones, celandines and wood sorrel, weaving a carpet of joyful colour.   If there are woodland fairies, this is where they love to dance!

The primrose, Primula vulgaris, is one of Britain’s best-loved wild flowers.  Its common name is derived from the Latin ‘prima rosa’, meaning ‘first rose’, and it heralds the arrival of spring, braving late snowfalls and strong winds, lighting up a woodland floor before the leaves of the trees have emerged to cast their shade.

The leaves of the primrose are lush green, deeply furrowed and wrinkled, forming loose rosettes which make a perfect foil for the delicate flowers.  The plant prefers moist ground in light shade, especially facing the morning sun.

Now, this is something I didn’t know…

There are two types of primrose flowers, apparently identical but with one important difference.    Look carefully at their centres.   In some, there is a greenish-yellow pin (these are called ‘pin-eyed’) while in others there is a slightly thicker cluster of yellow anthers (these are called ‘thrum-eyed’). 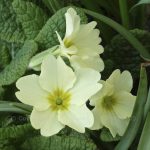 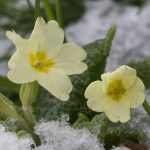 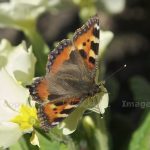 This is nature at its cleverest, because the plant has found a way to avoid self-pollination.

I call that a stroke of genius!

Both the leaves and the flowers of the primrose are edible:  the flowers can be sugared for cake decoration, and the young leaves may be added to salads.   The root and flowers contain a fragrant oil, which has traditionally been used for flavouring syrup and tea. 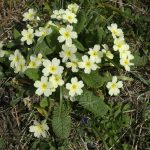 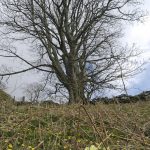 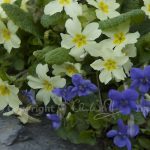 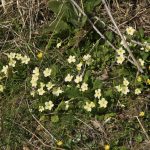 In herbal medicine, a tincture of primrose was taken to alleviate rheumatism and gout, and the leaves were used to treat wounds.  Primrose tea is reputedly good for the nerves:  the 16th century herbalist John Gerard recommends the drinking of primrose tea in the month of May, as it is ‘famous for curing phrensie’.  (I imagine that ‘phrensie’ is an old spelling of ‘frenzy’, indicating hysteria.)

It seems a shame to go harvesting primroses for medicine – and anyway, just by looking at them, you can’t help but feel better!

The primrose is widespread throughout Britain, and further afield it occurs in southern and western Europe.  It is a popular garden plant, and nurserymen have produced many beautiful cultivars in a rainbow of colours.

Scotland has its own unique primrose:  Primula scotica, an endemic species which is restricted to coastal grassland sites in Caithness, Sutherland and Orkney.  Clusters of tiny magenta flowers are borne aloft on stalks about 4 cm tall, above silvery-green oval leaves.

Have you seen any primroses in flower yet?   Have you been lucky enough to find Primula scotica in the wild?