Following on from my feature on the Scots pine, I thought I’d take a look at five of the key wildlife species of the Caledonian forest.  My good friend, wildlife photographer Mike Read, has kindly allowed me to use some of his brilliant photos.

There’s no mistaking the world’s biggest grouse species!  The capercaillie breeds in Scotland, and is resident here all year round.

In early spring, male capercaillies gather at leks to put on a display for the females, fanning their tails and making loud throaty noises like popping corks.  They can become quite aggressive – if you encounter one on a forest path, treat him with caution!

Adult birds feed on berries and the shoots of trees and shrubs, including conifers;  the chicks will eat insects in the undergrowth.  The males can weigh over 8 lb (3.5 kg), with a body length between 29 and 35 inches (73 to 88 cm);   the females are considerably smaller, looking much like greyhens (female black grouse) but with rust-coloured plumage on their throat and chest.

Although the capercaillie is widespread across Northern Europe, it became extinct in Britain in the late 18th century.   It was re-introduced in the 1800s, and is now largely confined to the pine forests of the Cairngorms and Speyside.  Numbers have declined in recent years, but much is being done by Scottish Natural Heritage, the RSPB and others to preserve the existing population and their habitat.

Interesting fact:    Humans have eaten capercaillie since prehistoric times, but they are not legally classed as game birds, because they were extinct in Britain when the Game Act of 1831 was passed by Parliament. 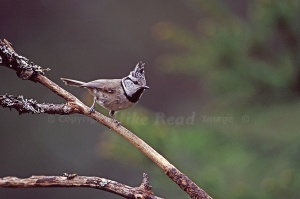 From the large and impressive to the small and dainty!   The crested tit haunts the remnants of ancient pine forest, scurrying up and down the trunk in search of insects in the thick crevices, and dangling upside-down on the branches as it inspects the pine needles.

These charming little characters measure just over four inches in length and weigh under half an ounce (14 grams);  they can be difficult to spot, and some experts recommend learning the call, so that you can recognise it (not replicate it, although I guess you could try!)  The crested tit has a distinctive rolling trill, “quite harsh-sounding but cheerful, like a long-tailed tit with a head cold”, as one website puts it.

The crested tit is distinguishable by its jaunty black-and-white crest, which it can raise and lower at will.  In Scotland, the population is isolated from those on mainland Europe, which has resulted in the Scottish birds being classified as a sub-species (Lophophanes cristatus scoticus).

Another resident breeder in Britain, the crested tit has been given Amber conservation status.  It is wholly dependent on Scots pine, especially the remnants of ancient forest, because it lives, feeds and breeds here, occasionally using the old nest holes of great spotted woodpecker and even dreys made by red squirrels.  The crested tit will cache food when it’s in season – seeds in spring and moth larvae in autumn – hiding it away under clumps of lichen on the pine branches.

Interesting fact:   Ecologists consider that the presence of crested tits is an indicator of a forest’s health, and they keep certain insect species below pest proportions.

The red squirrel is one of Scotland’s best-loved mammals, endearing itself to observers with its tufted ears, black ‘button’ eyes and exuberant bushy tail.   Fur colour can vary quite considerably across its wide distribution range – surprisingly, this includes much of western Europe from Scandinavia to Italy, and eastwards to Mongolia and Japan – but in Scotland the coat is usually reddish-brown with white or cream underparts.

In the UK, the red squirrel is protected by the Wildlife & Countryside Act 1981, and as a Priority Species it is the subject of a Biodiversity Action Plan.   Scottish Natural Heritage and the Forestry Commission jointly chair a Scottish Squirrel Group, a title which conjures delightful but probably inaccurate images in my mind.

Found throughout the Highlands, both in the remnants of old Caledonian forest and in new plantations of forestry, the red squirrel’s varied diet consists of acorns, hazelnuts, beech mast and Scots pine seeds;   buds, shoots, lichens, fungi, insects, berries, and the eggs of birds such as song thrushes.

Interesting fact:    Red squirrels can be right- or left-handed!   Scientists have proved this by studying the ‘helical pattern’ which is left after a squirrel has stripped a pine cone.  The pattern may run downwards from left to right or from right to left, depending on whether the squirrel is right or left-handed.

The Scottish crossbill is the UK’s only endemic bird species, meaning that it is unique to us, and can’t be seen anywhere else in the world.   However, this lovely little finch is determined to keep a low profile:   unless you’re a keen birdwatcher, you’ll find it very difficult to tell it apart from another, very similar species – the common crossbill, which also occurs in this area. Just to add to the excitement, a third crossbill species, the parrot crossbill, occasionally puts in an appearance.

Measuring just over six inches in length, the Scottish crossbill is roughly the size of a house sparrow, but one with much more attitude.  The name ‘crossbill’ refers to the fact that the two mandibles are crossed over when the beak is closed;  this allows it to prise open the tightly-packed scales of pine cones – an important ability, because the bird’s diet consists almost solely of the seeds of Scots pines.

Pairing begins in late winter or early spring:  the males flock together to sing loudly in chorus, each with a view to impressing a female.   When a female has accepted a male, they touch bills and he feeds her to confirm their partnership.   The nest, located 10 to 15 metres up in a pine tree, is made from twigs and lined with grass, lichen and feathers.

The British government has devised a Species Action Plan for the Scottish crossbill, as it is on the list of Europe’s most threatened birds.

Interesting fact:   Before the Caledonian forest was reduced to its present size – just 1% of its original area – the Scottish crossbill was much more common and widespread. 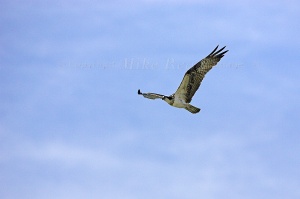 The osprey is the world’s most widely-distributed bird of prey, and at one time it was much more common in Britain than it is today.   Persecution and loss of habitat led to its disappearance from England, and severely reduced numbers in Scotland;   only in the last century have ospreys returned to the Highlands and to certain parts of England and Wales to breed.   Recently the species’ conservation status has been downgraded from Red to Amber.

In Britain the osprey is a summer visitor, returning in late March or early April to breed.   Towards the end of August the birds head southwards again, flying across Spain and Portugal to western Africa.   The Scottish Wildlife Trust has successfully tracked a young osprey, hatched at Loch of the Lowes in Perthshire, on its autumn migration all the way to Guinea in West Africa – a journey of over 3,000 miles.

With a diet that relies wholly on fish, ospreys need to nest near a loch;   the chosen site is often in a tall Scots pine, with a panoramic view and plenty of fresh air!  Eggs are laid in April or early May, and after 35 days the chicks hatch, often becoming star attractions at wildlife centres where live video is streamed from cameras set up near the nest.

Interesting fact:   A male osprey can weigh as little as 3½ lb (1.5 kg).   If you’re lucky enough to see an osprey catch a fish and fly back up to its nest with it, remember that the fish could weigh more than the osprey itself! 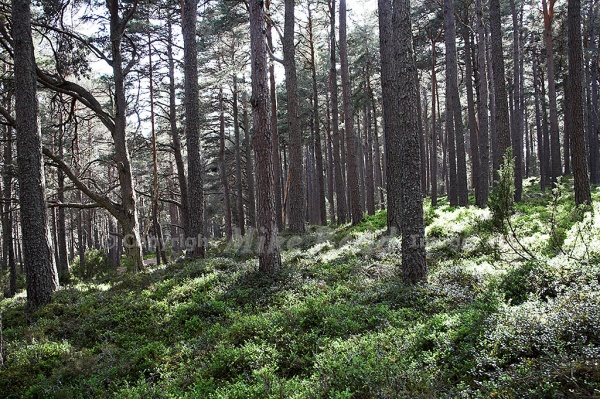 Mike Read is a professional wildlife and landscape photographer, a worldwide tour guide, and a writer and lecturer.  He lives on the edge of the New Forest National Park in central southern England.   You can see lots more of his images on his website:   www.mikeread.co.uk.

Take a look at my feature on the Scots pine to find out more about the natural history of the Caledonian forest.