The tiny crystals of garnet glow with a deep red fire, like petrified drops of blood.

We have been polishing and cutting garnets for thousands of years;   in fact, Noah’s Ark is supposed to have been lit by a large garnet!

The Egyptians, Greeks and Romans all knew and loved garnets;   because of its blood-red hue it became the ‘warrior stone’, carried in battle for protection and courage.  Garnet was chosen to decorate the swords and armour of powerful leaders.

For proof, just take a look at one of Britain’s most spectacular archaeological discoveries:  the Sutton Hoo treasure, found in an Anglo-Saxon ship burial in Suffolk.   Among the finds are two jewelled shoulder clasps, one of which is shown here.  The craftsmanship is superb, combining garnets with glass in an intricate cloisonné design that leaves you spellbound.   The warrior, according to Michael Wood, may have been an early 7th century ‘king’ of East Anglia by the name of Raedwald.

The square panels are filled with garnet cloisonné, chequerboard millefiori and opaque blue glass. According to the British Museum, the curved ends, which are decorated with two entwined boars, are made with some of the largest garnets known in Anglo-Saxon England.

Currently in the British Museum, www.britishmuseum.org

Garnets occur all over the world, from Russia and the United States to Kenya, Tanzania and Turkey;  and their colour is not limited to blood-red.   Varieties include orange, yellow, green, purple, brown, pink… in fact, until recently, garnets had been found in almost every colour except blue.   Then, in the 1990s, some wonderful blue specimens were discovered in Madagascar.   These, needless to say, are expensive!

The word ‘garnet’ comes from ‘granatus’, a Latin word meaning ‘seed-like’.   This may refer to the appearance of the crystals, which resemble small seeds embedded in a rock.   Not that all garnet crystals are tiny;   writing in the first century AD, Pliny the Elder described some that were so large they were hollowed out and used as drinking vessels.

I’m not going to go into the physical structure of garnet, except to say that it most commonly occurs in the form of a dodecahedron, in other words a crystal with 12 faces.   Because garnets are hard, they are widely used for making scientific instruments, watch mechanisms, and abrasives, including sandpaper.

It took me quite a few years of walking on beaches and picking up pebbles before someone told me that one of the stones I was holding had garnets in it.   After that, I was seeing them everywhere… tiny little reddish-pink crystals scattered all over a smoothly rounded pebble, mixed in with quartz and sparkly grey mica.  I believe that this type of rock is called garnet gneiss, a metamorphic rock which was formed in temperatures exceeding 800ºC during the Proterozoic, a geological period that began 2.5 billion years ago.

I’ve even seen patches of garnet sand on some beaches, where the crystals are being eroded out of the shoreline rocks and ground down by the pounding of the waves. 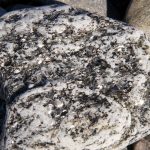 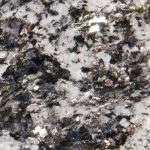 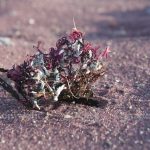 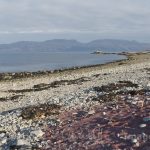 None of the garnets that I’ve picked up are gem quality, but for me that doesn’t dim the excitement!  The tiny sand-like grains that I extracted from a boulder high on a hillside in north-west Scotland are prized just as much as the marble-sized specimen which I bought from a crystal shop many years ago.

I’d like to point out that I didn’t split this rock myself.

The size of a large grain of sand – but still precious! The larger flat pieces are mica.

or you can read more about Lewisian gneiss.