Continuing my series on British trees, we’re heading up into the Highlands to stand beneath a beautiful Scots pine…

With a range that stretches from western Scotland to eastern Siberia, the Scots pine (Pinus sylvestris) is the most widely distributed conifer in the world.   In Britain – and in particular Scotland – there is a strong sense of affection towards this long-lived and majestic tree, which has had much to suffer over the centuries from the spread of human civilisation.

Much of our conifer forest consists of Douglas fir, Norway fir and Sitka spruce, but these species are all recent introductions.  The Scots pine is one of only three conifers native to the UK:  the others are yew and juniper.   (It surprised me that the larch, a deciduous conifer native to central Europe, was only introduced to Britain in the 17th century.)

For thousands of years, the Scots pine has played a unique role in the make-up of the Caledonian forest.   As the forest’s largest and longest-lived tree, it is an important ‘keystone species’ on which an entire eco-system of wildlife depends.

If we could see the landscape of Scotland as it was 6,000 years ago, we probably wouldn’t recognise it.  The Caledonian forest covered over 3.7 million acres, and among the Scots pines were species such as alder, hazel, rowan, birch and juniper.   Around 4,500 years ago the extent of the forest started to decline, possibly as a result of a change in climate, and this was hastened by the arrival of the first farmers.  Today, the Caledonian forest covers only 1% of its former range.

Young Scots pines have a simple conical shape, but their pattern of growth depends on lots of different circumstances.  For instance, if a deer nibbles the main shoot, the tree may develop a double-headed profile;  if a seedling takes root in boggy ground or an exposed, windy site, it can become stunted and wizened like a bonsai.  Added to this, the species has 11 recognised variations in shape within Scotland.   The website Trees for Life explains:  “The Scots pine is unusual amongst conifers in having a number of different mature growth forms, ranging from tall and straight-trunked with few side branches, to broad, spreading trees with multiple trunks.”

A mature Scots pine that has been able to grow and spread to its full potential is a truly majestic sight.   The tallest specimens in Scotland rise to over 65 feet in height, with a girth of up to 12 feet.   The ground beneath them is deeply littered with many years’ worth of fallen cones.

On young trees the orange-red bark is paper-thin, but as it matures it becomes thick and hard, with deep ridges and fissures;   this protective layer once served to withstand natural forest fires.  The fissures provide ideal crevices for mosses and lichens to get a hold, and excellent homes for insects.   The insects, in turn, attract a wealth of birds including woodpeckers, treecreepers, and the dainty little speciality of the Scottish highlands – crested tit.

Scotland’s oldest recorded Scots pine is in Glen Loyne, Inverness-shire.   It is thought to be about 560 years old, and it is growing in a group of old pines that have an average age of 440.  But, as scientists point out, there may be older examples out there, growing in blissful obscurity! 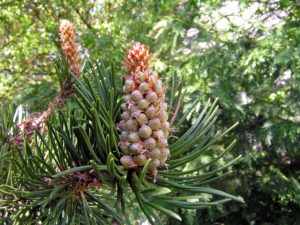 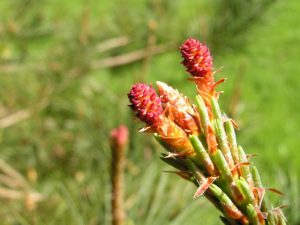 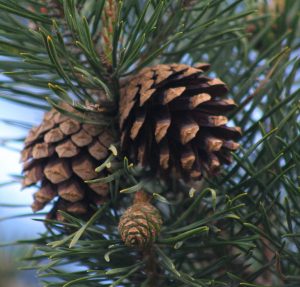 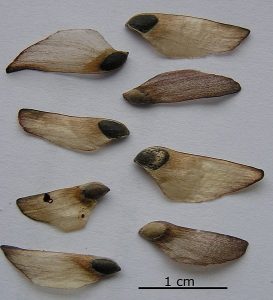 In May, male and female flowers appear, both on the same tree;  the flowers are pollinated by the wind.  In a ‘mast year’, a full-grown tree can produce over 3,000 cones, which take two years to mature.   For this reason, there are always two sets of cones on a tree:  the green cones which are ripening, and the mature cones which have turned brown.  In warm weather, the mature cones open up and release their seeds;  each seed has a tiny ‘wing’ to assist its journey on the wind.

Red squirrels love Scots pine cones;   in autumn, they can be seen busily collecting and storing them ready for the long winter ahead.   It’s amazing when you consider how long this seasonal pattern has been going on:   peat deposits have revealed pine cones that are thousands of years old, still bearing the teeth marks of red squirrels!

Cowberry, growing on a fallen pine

Plants associated with the Caledonian pine forest include twinflower, one-flowered wintergreen, blaeberry and cowberry, as well as the orchid known as creeping ladies’ tresses.   These plants will happily colonise fallen trees, creating living hummocks of vegetation.

Many of Scotland’s most iconic wildlife species live in and around the pine forests:  black grouse and capercaillie feed on the buds and shoots, while the Scottish crossbill – Britain’s only endemic bird species – uses its parrot-like beak to prise open the cones and eat the seeds.  The woods are a haven for pine marten, badger, red deer and the elusive wild cat;   in the past, they also supported wild boar, lynx, moose, brown bear and wolf.

Even when it dies, a Scots pine tree is a magnet for wildlife of all kinds.  Its timber is rich in resins, which slow down the rate of decomposition;  and while this is happening, a dead tree can provide a home for lichens, fungi and insects, nest holes for owls and woodpeckers, and a safe daytime roost for bats.

Saplings of mountain ash can sometimes take root on a Scots pine, the berries having been deposited there in the droppings of birds.  Stunted birch trees may also be found growing in little footholds between the branches.

Historically, the Scots pine’s tall, upright stance has led to its downfall, because its trunks were ideal for railway sleepers, telegraph poles, fence posts and ships’ timbers.  The added benefit for boat-building was, of course, that the timber was slow to decay.

In centuries gone by, a superstition warned against felling pine trees under a waning moon, because the planet’s gravitational pull affected the flow of sap and thus the resin content;   only now are scientists beginning to acknowledge that trees, like most other living organisms, really are influenced by the moon’s phases.

The resin and needles of the Scots pine have traditionally been used to treat respiratory problems, and they also have antiseptic properties.  There’s something invigorating about these trees:  as you walk through a pine forest, just inhaling the scent is an uplifting sensation!

In Gaelic, the word for Scots pine is ‘guibhas’, roughly pronounced ‘goo-ass’;   in place names, it is found in Allt na Ghuibhas in Wester Ross, and historians believe it’s also the origin of ‘Kingussie’.

In ancient folklore, pine cones were recognised as symbols of fertility, and the evergreen nature of the pine tree represented immortality.   At the winter solstice, the druids would light bonfires of Scots pine branches, with the aim of drawing back the sun into the cycle of seasons.

In Britain, Scots pines are not confined solely to Scotland, although this is their stronghold.   You can see them dotted around the countryside of England and Wales, a small group of them often standing guard over old farmhouses or marking the summit of otherwise bare hilltops.   In North Wales, I’ve often noticed Scots pines poking at all angles out of ancient-looking mounds in fields where generations of farmers have been ploughing around them for centuries.

This brings me to two of my favourite books, which contain some fascinating references to Scots pines…

“In the open country, a farmer who wanted to let the [cattle] drovers know that he was able to provide food, accommodation and grazing planted three Scots pines.  These were visible at a great distance, and the drovers used them as way marks.   These trees remain when all traces of the old inns or farms have disappeared, the stones having been used for other buildings.”

Fay Godwin and Shirley Toulson, ‘The Drovers’ Roads of Wales’

“It is not a theory, but an observation slowly built up that Scotch firs… are almost certain signs either of the line of an ancient track, or more particularly its sighting points.  They are to be seen in twos and threes about the very ancient homesteads, or a thin line of them running along a hill ridge or flank…  The strange thing is that where so found, no others can usually be seen in the country round, except perhaps a solitary one in a field which also marks the same ley track.”

Crannog on Loch Tay, with Scots pine and beech

In January, Forestry Commission Scotland announced the result of a public poll to find a national tree for Scotland.  The Scots pine rose head and shoulders above the competition, winning 52% of all votes cast.   The Forestry Commission is now developing a funding package to increase people’s awareness about the Scots pine, and to promote it as a symbol of the Scottish landscape.

Founded in 1989, Trees for Life is a conservation charity devoted to restoring 1,000 square miles of Scotland’s Caledonian forest.   They’re working with the Forestry Commission, the National Trust for Scotland and wildlife charities to protect Scotland’s native tree species through extensive planting schemes.   You can find out more about their work here.

Unfortunately, in this winter’s gales, many old Scots pines have been lost, including 200-year-old specimens near Loch Ness and others in Glen Affric.   The work undertaken by farmers, estate managers, conservation workers and volunteers is therefore vital in helping to ensure that the Scots pine will be a feature of the Scottish landscape for generations to come.

‘The Drovers’ Roads of Wales’ by Shirley Toulson and Fay Godwin is an exploration of the tracks used since medieval times until the 1800s to drive cattle – not just cows, but pigs, sheep, even geese – from the Welsh hills right through to the Midland counties and south to the markets of London.

If you enjoyed this, you might like to read the other features in my British trees series:

Or take a look at my new feature on the wildlife of the Caledonian forest.