I have to admit that I haven’t visited many cathedrals:   Dunkeld was a recent addition, but after a bit of memory searching I only came up with four others:  Winchester, Hereford, St Paul’s in London and York Minster, all long before I had a camera or imagined setting up The Hazel Tree!

I guess the reason is that we tend to gravitate away from cities most of the time, towards the remoter parts of the country and the scattered remains of early fortresses, castles and chapels.   Some places speak to your heart more than others.

But early in January I found myself in Edinburgh, with a camera, in glorious sunshine;   so I made the most of it, and headed up the Mound towards the city’s most famous street, the Royal Mile.  Here, among the many historical attractions, I decided to take a peek inside St Giles’ Cathedral.

When I entered through the main west door, I must admit that I knew absolutely nothing about the place;  my eyes were immediately drawn upwards, towards the magnificent ceiling and the beautiful windows.

There’s something about high-roofed churches – I always get a sense of something suspended between earth and heaven, like the echoes of centuries-old prayers.   The atmosphere was deep, cool and serene;   sunbeams from the stained glass pierced the inky blackness of the shadows, casting kaleidoscopes of jewel-like brilliance onto stone pillars and archways.

The website of St Giles’ Cathedral tells us that a parish church had been established in Edinburgh by 854 AD;   later, in the early 1100s, a church dedicated to St Giles was founded by the sons of King Malcolm and Queen Margaret, with the aim of spreading the Catholic faith throughout Scotland.

St Giles was born in Athens, and it is thought he came from a noble family.   He gave away his wealth to the poor, and eventually settled in rural France where he lived a simple life of solitude.  One day, a hind ran to him for protection from huntsmen who were pursuing it;    some stories say that St Giles was wounded by accident, but he refused offers of compensation.  He became the patron saint of cripples and lepers, and his popularity spread across France and England to Scotland during the time of the Crusades.

The original church of St Giles was quite small, with rounded arches and elaborate carving in the Romanesque style, but there are few surviving traces of it in the building that we see today.   Next came a larger church, which was set ablaze in 1385 by forces loyal to Richard II of England.  It is possible that the four massive central pillars are the only remnants of this period. 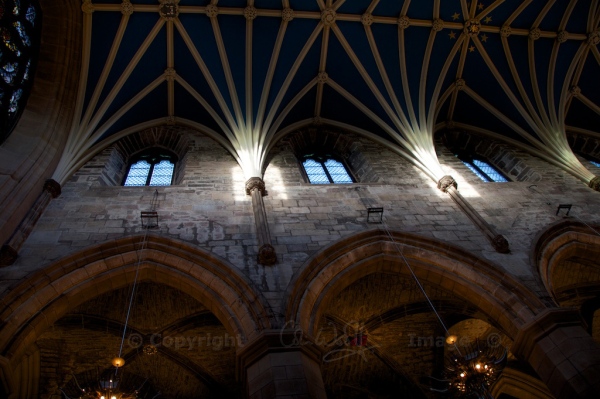 Over the next few generations, several chapels and aisles were added to the church, and in 1500 the impressive central crown-shaped spire was built.   But flames of a different kind were soon to sweep through Scotland, in the shape of the Protestant Reformation;  Mary of Guise, at that time Regent of Scotland, allowed the controversial minister John Knox to preach at St Giles in 1559, and afterwards the building was converted for Protestant worship.

Knox served as Minister at St Giles until 1572, and when Mary’s daughter, Mary Queen of Scots, returned from France to take up her throne in Scotland, he admonished her on several occasions for her Catholic faith.  The announcements of Mary’s second and third marriages were made here, and an accusation linking her third husband, the Earl of Bothwell, with the murder of her second, Lord Darnley, was nailed to the church door.

During these troubled years, some parts of the church were used for unusual purposes, including a store for the notorious ‘Maiden’ or guillotine, and a prison for ‘harlots and whores’.  A statue of John Knox stands in the nave, and he is buried, according to his wishes, in an old graveyard close by.

The church was elevated to cathedral status by Charles I, who introduced bishops to Scotland.   This move wasn’t greeted with enthusiasm, and in 1638 a National Covenant declared the Church’s formal rejection of royal interference.   A much-faded copy of this Covenant still survives, and is on display in St Giles.  During the Civil War that followed, St Giles was the silent witness to many executions, including the Marquis of Montrose, who was a Royalist Covenanter, and his bitter rival, the Marquis of Argyll. 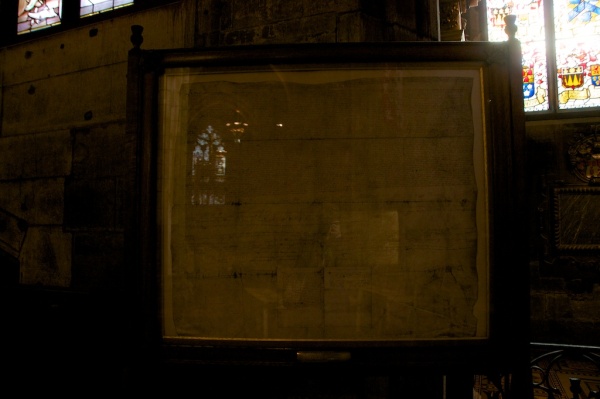 National Covenant (no one expects you to be able to read this!)

Over the next few centuries St Giles fell into disrepair, and in 1829 the architect William Burn supervised its restoration.  This was continued by William Chambers, Lord Provost of Edinburgh, in 1872.

Some unusual things about St Giles…. 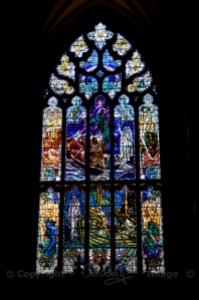 The nave and the chancel are roughly the same length, so the ‘crossing’ – the part where the north-south and east-west arms of a church meet – lies in the centre rather than towards the eastern end.  In recent years, this central point has become the focus of religious ceremonies.

The term ‘cathedral’ cannot really be applied to St Giles, because after the Reformation the notion of bishops, dioceses and cathedrals was rejected by the Church of Scotland.   It is more correctly known by its earlier name, which is the High Kirk of Edinburgh.

In 1454 some relics of St Giles – an arm bone and a diamond finger ring – were given to the Church by a nobleman.  Some sources say that the relics were sold to local goldsmiths during the Reformation.  However, in 2002 workmen discovered an arm bone hidden in a loft area above the Holy Cross aisle, one of the oldest parts of the building.  I can’t yet discover if this was proved to be authentic.

St Giles is known for its beautiful stained glass windows.   Some of the glazing dates from the late 1800s, and there are several stunning pieces by the 20th century artist Douglas Strachan.   The north window, which depicts Christ calming a storm, stops you in your tracks and leaves you spellbound with its rich blues and purples.

Over 200 memorials are housed within St Giles, in the honoured memory of distinguished Scotsmen and fallen soldiers.   Among them is the writer Robert Louis Stevenson, whose bronze memorial is in the Moray Aisle. 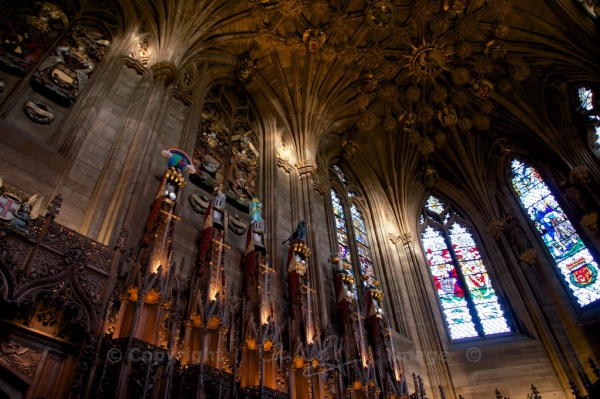 Between 1909 and 1911 the Thistle Chapel was added at the south-east corner.   Designed by Sir Robert Lorimer, this tiny chapel measures only 37 feet by 18.  It is richly decorated in neo-Gothic style to commemorate the holders of the Most Ancient and Most Noble Order of the Thistle, Scotland’s foremost Order of Chivalry which was introduced by James VII in 1687. 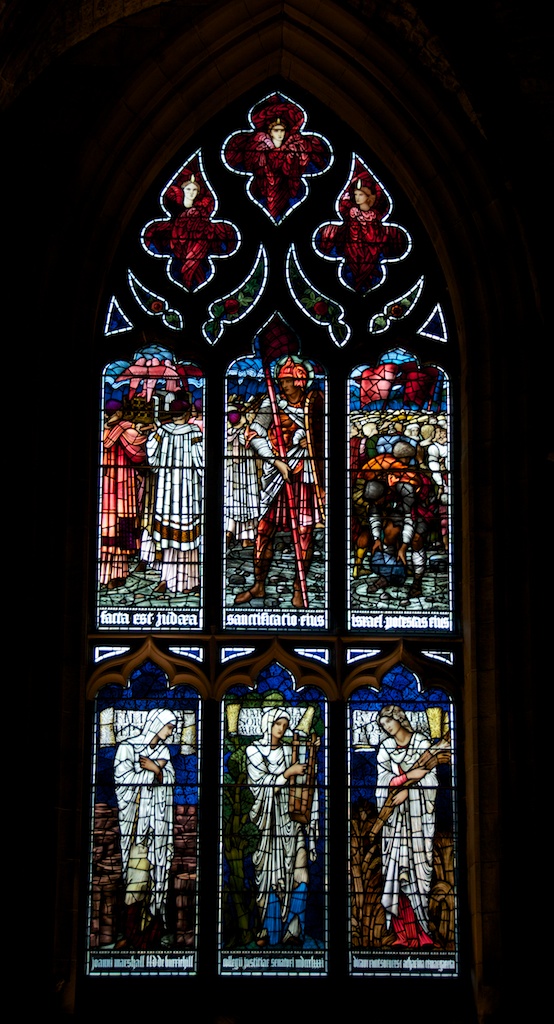 Window by Edward Burne-Jones, showing the crossing of the Jordan

The organ was installed in the south transept in 1992, and incorporates 4000 pipes

The west window, by Icelandic artist Leifur Breidfjörd, celebrating the poetry of Robert Burns. And that’s a tierceron-vaulted ceiling. I didn’t know that, either! 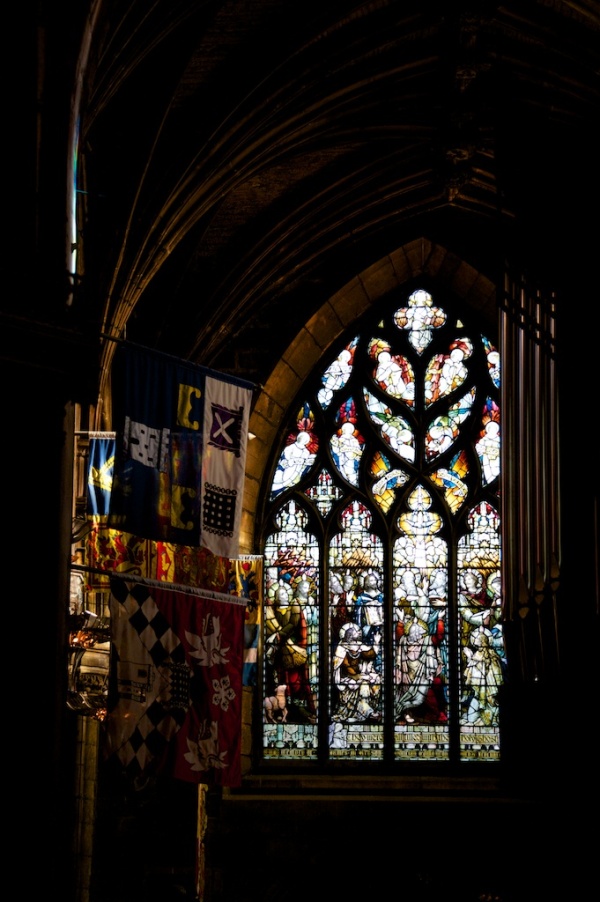 The crossing, with the simple altar and the west window beyond 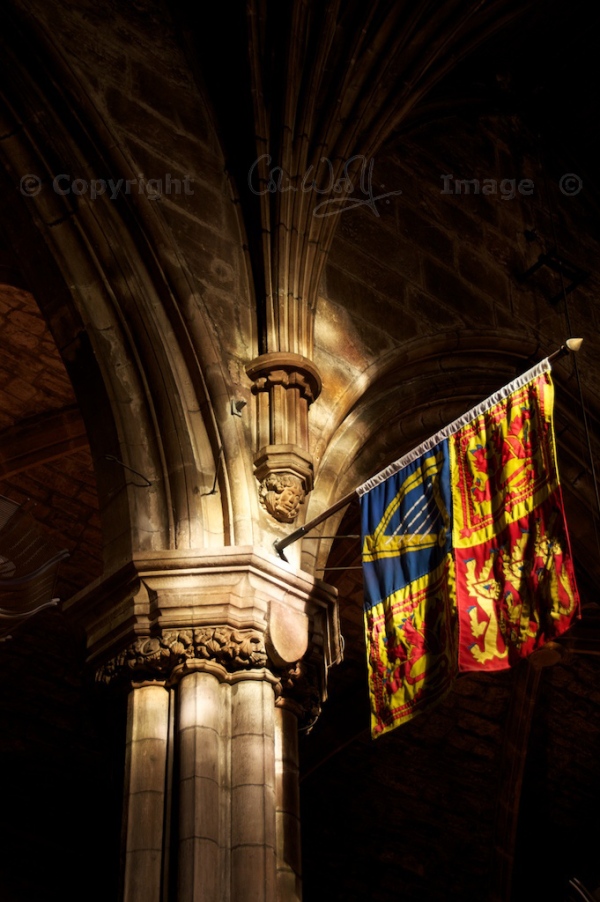 What did I love most about St Giles?   The brilliantly coloured banners and heraldic flags, the soaring arches, the welcoming friendliness of the guides, and the sense of peace within its walls.   If I’m honest, I wasn’t all that taken with the darker alcoves, tiny chapels that house the tombs and effigies of great noblemen whose necks were on the wrong side of an axe at a crucial moment.  I was, however, moved to see a couple of poems and prayers written on scraps of paper and placed on the tomb of the Marquis of Montrose, along with a sprig of heather.

My photos really don’t do St Giles justice, especially the internal shots, as I am still learning about long-exposure photography.    I do a good line in ‘dark, brooding and atmospheric’, but this doesn’t bring out the historical detail!   I did, however, enjoy walking around the outside and trying to capture the magnificence of the crown-shaped spire.

Looking down the Royal Mile from the west entrance 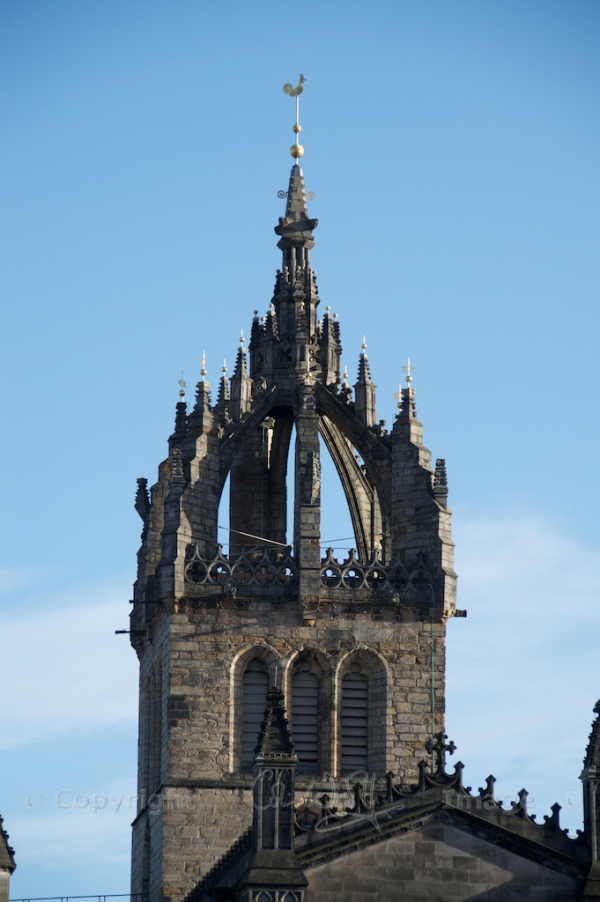 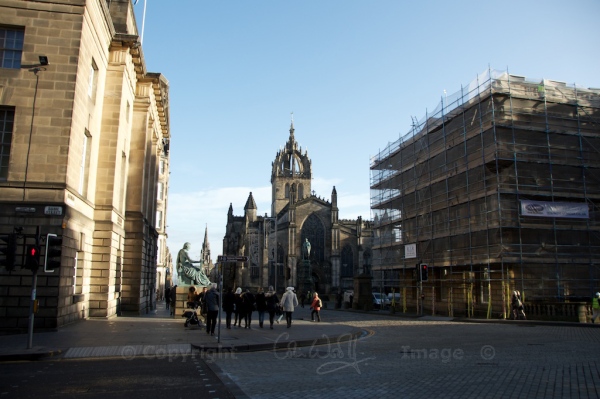 Admission to the Cathedral is free, but you’re invited to make donations;   a permit for photography is £2.   Opening times and hours of worship are shown on the Cathedral’s website.   There’s also a shop inside the Cathedral, selling guide books and souvenirs. 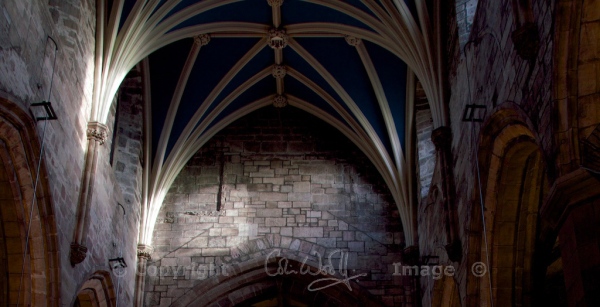 If you enjoyed this, please take a look at my feature on Dunkeld Cathedral, which has history seeping out of every Gothic arch and stories lurking in every shadow.