My first impression of Dunkeld’s Cathedral of St Columba was on a cold day in late November, with the setting sun lengthening the shadows and frost already breathing its silent spell on the well-mown grass.

Standing on the bank of the River Tay and surveying the Cathedral from the south, I assumed that the building had taken place in two stages:    the first part, now roofless, I imagined must have been abandoned and allowed to fall into ruin, and later, a much more habitable structure had been added as an extension.    Either that, or the congregation in the western half preferred singing hymns under the stars.

But this isn’t how it happened at all.

The Cathedral Close and gateway

The tranquil riverside location was first enjoyed by a community of Culdees, who built a monastery here around 730 AD.  A hundred years later, Kenneth MacAlpin, traditionally recognised as the first King of Scotland but now believed by Neil Oliver and others to be the first King of Pictland, had the simple wattle walls re-built in red stone.

This was the 9th century, and repeated Viking raids were wreaking havoc with monasteries up and down the coast:  precious artefacts were being seized, and monks slaughtered.  St Columba’s monastery on Iona was a favourite target, so Kenneth MacAlpin had the saint’s relics brought to Dunkeld for safe keeping;  his bones were buried under the chancel steps.  A beautifully carved ‘Apostles’ Stone’, thought to depict Christ’s disciples, dates from around the same time, and is preserved in the chapter house, having been rescued from its temporary role as a gatepost.

During the Reformation in the late 1500s, Columba’s bones were taken to Ireland, but there is a persistent belief that some forgotten relics still lie buried in the cathedral grounds.

Dunkeld grew to become the administrative headquarters of the early Scottish Church, and I was surprised to discover that it, too, suffered Viking raids.   This forced the Church to move its centre even further east, to St Andrews.  (I’d have thought that the Vikings could easily have approached St Andrews by sea.)

This is an information board outside the church, and it includes a floor plan.   Surprisingly, the choir at the eastern end is the oldest surviving part, dating from around 1350;   but it looks much more recent, having been fully restored in the early 20th century so that it could be used as a parish church.  However, the reddish blocks that are incorporated into the wall of the eastern gable were apparently taken from the original Culdee monastery.

Over the 14th and 15th centuries the cathedral was either extended or embellished by successive generations, and the 96-foot-high tower at the north-west corner was added in 1501.  Desecration came soon afterwards, however, with the Scottish Reformation in 1560, when any symbols of the Catholic faith were destroyed.  Dunkeld was stripped of its glory, and even parts of the roof were removed;   fortunately, the practice of worship was continued by a loyal congregation in the part that remained intact.

In 1689 the first Jacobite uprising led to a battle in which much of Dunkeld, including the Cathedral, was set ablaze. The commanding officer of the defending forces, Lt Col William Cleland, heroically held the Cathedral and its surroundings against a dangerously confident Highland army that had just swept to victory at Killiecrankie.  Cleland lost his life in the conflict, and he is buried in the nave.

Ruined nave. This part of the cathedral was consecrated for use in 1464.

Tower and west window. The window was added in 1469, and although it is now in ruins, it is believed to have been one of the most elaborate ever built in Scotland.

The tower has a peal of six bells. A notice in the room below says that they were ‘tuned and rehung with all new fittings and framework, AD 1981, by the Whitechapel Bell Foundry, London’

In a little room underneath the tower is a display of carved stones, some rescued from the graveyard during the Reformation, and others dating from many centuries before.  Among these is a Pictish carving of a warrior on horseback, and a ‘hogback’ stone, long and ridged like a roof tile, with curious striations etched into its surface.  As far as I can discover, these gravestones with a curved or ‘hogbacked’ shape were favoured by Danish settlers, and surviving examples date from the 10th to the 12th centuries;  their markings are thought by some historians to represent a tiled roof as a shelter for the dead person. 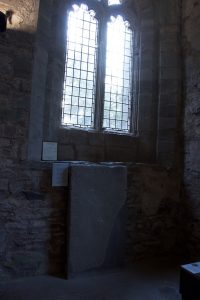 The room under the bell tower 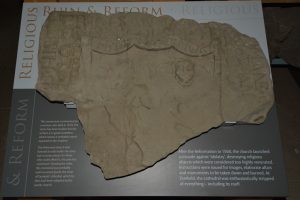 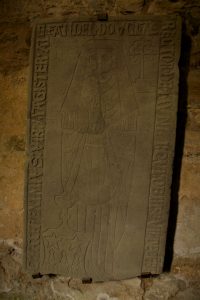 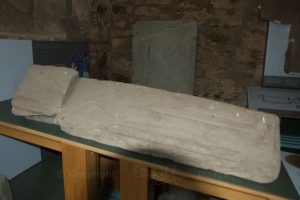 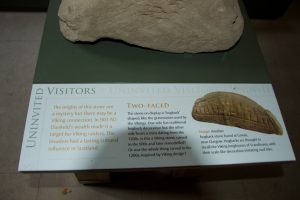 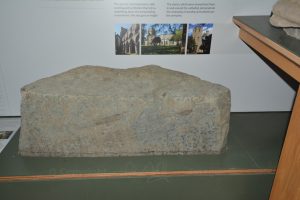 Roof of chamber below the bell tower

There are features of the Cathedral that I didn’t have time to examine, but the light was failing and our main priority was to photograph it from the outside before it got too dark.   This means that I missed seeing the tomb of Alexander Stewart, the infamous Earl of Buchan whose cruelty earned him the nickname of ‘the Wolf of Badenoch’;  and the headless effigy of Bishop Sinclair, chaplain to William Wallace and Robert the Bruce.  However, I have to admit that effigies are not my most favourite thing, headless or otherwise!   So I’m not quite as sad as you might imagine.

Interior of the restored part (formerly the choir)

Added to this, the quiet but dark recesses of the small ante-rooms had me glancing into every shadow, and checking every doorway.   The atmosphere in the main body of the church was calm, serene and cold, but in the chapter house, while I was taking photos of the Apostles’ Stone, I started to feel slightly spooked.  Perhaps it was just the confined space.

The north-facing side, with the sacristy shadowed by large yew trees

As we walked around the grounds, we admired the immensely tall Douglas firs and the lovely oaks and sycamores.  Cast by the setting sun, long fingers of shadow were reaching the cathedral walls;  and the grass was already crisp with frost, garnished with a scattering of dead leaves.  We stopped to look at a wizened old holly bush, whose branches were growing in knobbly spirals.  Whether this was by nature or human encouragement, I have no idea.

The whole place was about to dip into twilight, and blackbirds were giving their bedtime alarm calls.   We prised our frozen fingers from our cameras, closed the iron gates behind us, and left them in peace.

Dunkeld Cathedral hosts regular Sunday services for worship and Communion.   Outside of these times, the opening hours are:   9.30 am to 6.30 pm April to Sept;  9.30 am to 4 pm October to March.  There’s a small museum in the Chapter House, which also houses the mausoleum of the Dukes of Atholl. The Friends of the Cathedral offer guided tours, which may be booked in advance (see the Dunkeld Cathedral website, below).  Admission is free but donations are appreciated.

I’m sorry for the quality of some of my internal shots – the flash was bouncing off the lens hood, which I didn’t realise until later, leaving arcs of shadow in the image.

Read about the Battle of Killiecrankie, which took place just a few miles to the north-west of Dunkeld…  these glorious old woods have a peaceful yet haunting atmosphere.