I’m not at all sure what the collective term for ghosts is:   a presence, perhaps, or a clutch?

Anyway, just in case it has escaped your attention, Hallowe’en is approaching;  if you were unaware, a walk around any supermarket will put this right.  This means that, all across the country, people will be queuing up to be scared witless – or merely entertained, depending on their constitution – by a ‘fright night’ in a haunted castle or mansion.

I’m never quite sure what to make of Hallowe’en – it is over-commercialised, but its underlying roots are as dark as night, reaching back to the ancient Celtic festival of Samhain.   Spirits are said to be especially active around this time because the veil between their world and ours is very thin.

Fortified by this idea, I thought I’d take a look at some of Scotland’s most haunted castles and the stories behind them… 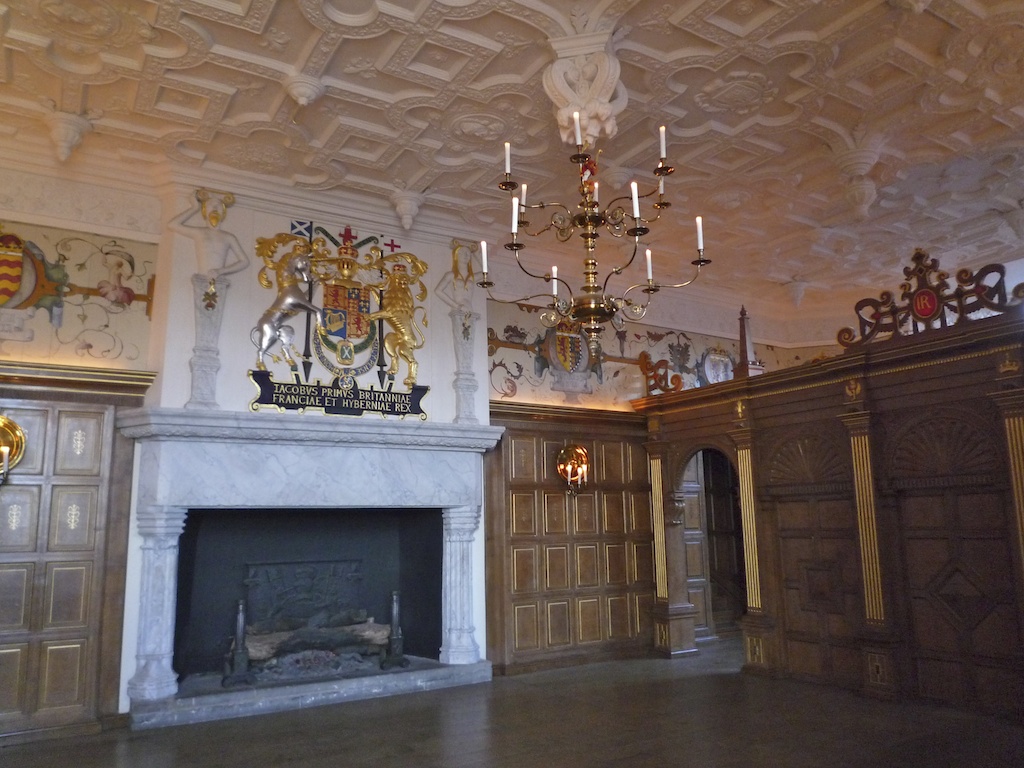 Let’s start with the most famous!   Edinburgh Castle is reputed to be among the ‘most haunted’ places in Scotland, and one of its inhabitants is said to be a lone piper.

A story tells that, centuries ago, some mysterious underground tunnels were discovered and a young lad was sent to find out where they went.  He took his bagpipes with him, so that those above could hear him playing and monitor his progress (I’m not sure about the logic of this at all).

When the playing stopped, the people who had sent him were obviously struck with a rather late sense of guilt, and went to look for him.  He had vanished.  However, the strains of his pipes can still be heard occasionally, playing underneath the castle.

And then there’s the drummer…  One night in 1960, a sentry on duty outside the castle heard the sound of drumming.  He turned and saw a figure standing on the ramparts.   The figure was, unfortunately, headless.  Nevertheless, it turned around and then disappeared.

Edinburgh Castle is open daily, 9.30 am to 6 pm in summer, and 5 pm in winter.   More details at www.edinburghcastle.gov.uk. 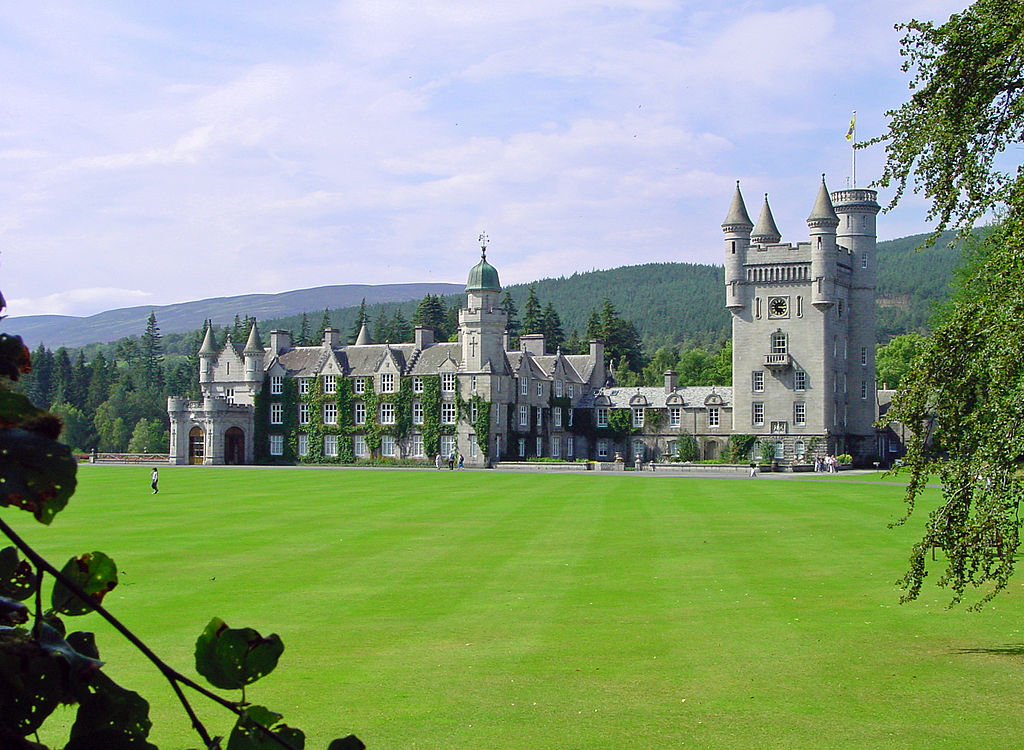 Balmoral Castle was the gift of Prince Albert to his wife, Queen Victoria, and in the mid-1800s it was enlarged to cater for their growing family.  Queen Victoria had fallen in love with the Scottish Highlands, and spent many happy times there.

After Prince Albert’s death, one of Queen Victoria’s favoured companions was John Brown, a servant at Balmoral.  John Brown’s ghost is sometimes glimpsed in the corridors, and it is said that HM The Queen, who has her summer holiday at Balmoral every year, has encountered him.  The website Haunted Rooms reassures us that “he is said to be always wearing his kilt.”   I am relieved to know that, and I would imagine that Her Majesty is quite thankful, too.

The Estate grounds, gardens and the Castle Ballroom are open to visitors from the beginning of April to the end of July each year.  Balmoral is closed annually between August and October, as the royal family are in residence.  There are guided tours at weekends during November and December.   Full details at www.balmoralcastle.com.

Few castles look quite so haunted as Linlithgow, with its shattered, roofless shell and gaping holes for windows.   Linlithgow has been the home of many Scottish monarchs, and both James V and his daughter, Mary, Queen of Scots were born here.

Queen Margaret’s Bower is a tiny stone room in the highest turret, named after the wife of James IV.  From here, no doubt in the bitter cold, she watched and waited in vain for her husband’s return from the Battle of Flodden.  No wonder her ghost has been glimpsed there.

Another apparition, ‘the Blue Lady’, has been seen walking from the Palace towards the nearby Church of St Michael.  She was witnessed by a custodian in 1973, and a number of visitors have also seen her;  a rustling of skirts has sometimes been heard at the same time.   It’s interesting to note that she has been seen mainly in April, and occasionally in September, but always around nine in the morning.

Linlithgow Palace is open daily, from 9.30 until 5.30 in summer and 10.00 to 4.30 in winter.  On the day that we first visited the Palace, which was in April, the shadows were already getting darker by late afternoon, giving the rooms an eerie atmosphere.   Colin and Verity ventured down into the kitchens and dungeons but I decided to stay above ground.

You can find out more about Linlithgow Palace at www.historicscotland.gov.uk  or in this feature on The Hazel Tree.    Historic Scotland organises ‘fright nights‘ at Linlithgow during late October and early November.

Sitting atop its own rocky peninsula with the waves of the North Sea pounding at its feet, Dunnottar is one of the most spectacular castles I’ve ever seen.  It would be almost disappointing to find that it has no ghosts – but, of course, it has plenty!

A girl in a plaid-type dress has been seen in the remains of the brewery, while a tall man of Scandinavian appearance has been witnessed going into the guard room by the main entrance.   A ghostly deerhound roams the grounds, and the sounds of a meeting in Benholm’s Lodging have been heard, when the building was empty of people.

Dunnottar Castle is open in summer from 9 am to 6 pm, and in autumn/winter from 10 am to 5 pm or sunset, if earlier.  The castle is occasionally forced to close in high winds or heavy rain.   You can read my full feature here on The Hazel Tree, or visit www.dunnottarcastle.co.uk.

The Douglas Garden, scene of the murder of the 8th Earl of Douglas by James II in 1452

If nothing else, Stirling can add two more colours to our spectrum of spectres:  a Green Lady and a Pink Lady.   In my mind, the name ‘Pink Lady’ conjures up some of the great scenes from ‘Grease’, but I’m guessing that this doesn’t have much to do with the dark chambers of Stirling Castle.

The Pink Lady is so named because she is wearing a pink silk gown;   she is thought to be either Mary, Queen of Scots or another woman who is searching for her husband.  (I wonder why she is looking for her husband?   Had he gone missing, or died on a battlefield?)

The Green Lady is thought to be the spirit of a lady in waiting who saved the life of Mary, Queen of Scots when her bedclothes caught fire.  The maidservant died in the blaze.

In addition, staff and visitors at Stirling Castle have reported seeing a ‘Highland soldier’ in full traditional costume.  A surveyor believed that he had captured him on camera in 1935, long before the advent of PhotoShop.   Here is the link, should you wish to inspect it.

You can read my full feature on Stirling Castle here on The Hazel Tree, or go to the Castle’s website for up-to-date visitor information.    If you fancy scaring yourself, there’s a company offering a ‘Stirling Ghost Walk‘ around the historic old town, in the shadow of the castle. 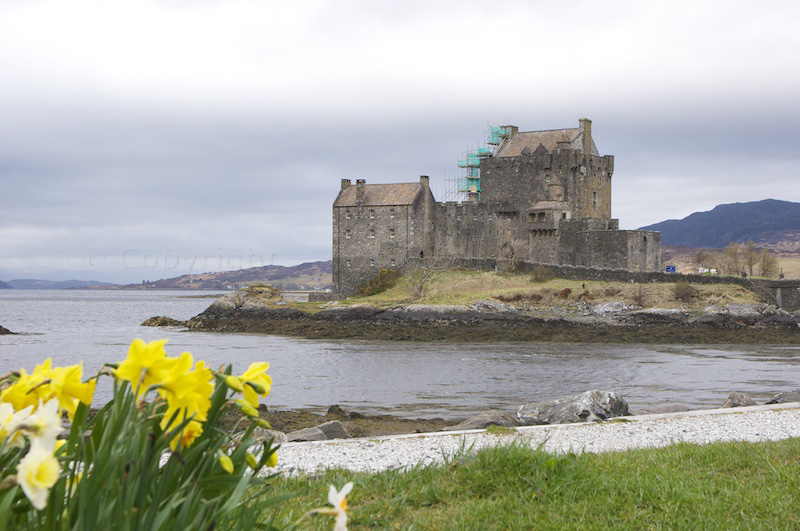 We end our tour at Eilean Donan Castle on the shore of Loch Duich.

Eilean Donan was once a stronghold of the Clan Mackenzie, who were involved in the 1719 Jacobite uprising.  Garrisoned at Eilean Donan were some Spanish soldiers, supporting the cause of James Francis Edward Stuart, ‘the Old Pretender’;  but the castle was bombarded by government forces and the Spaniards were put to death.   One of them apparently still lingers in the area that is now the gift shop, with his head tucked under his arm.   An apparition known only as ‘Lady Mary’ is sometimes seen in one of the bedrooms.

Reassuringly, the present custodian of Eilean Donan has said that he has been through the castle at all hours of the day and night, and never felt a presence in any of the rooms.   For opening times and admission prices visit www.eileandonancastle.com.

That’s enough ghostly encounters for one post!   What do you think about Hallowe’en and hauntings in general?   Have you had any supernatural experiences?