Recently we were pottering happily along a pebbly beach on the island of Lismore, and some of the stones that we were picking up looked like this.

Just one pebble with a hole in it you could probably accept as a happy stroke of luck – but there were many more!   Some had just one hole, beautifully drilled and smooth on the inside, just wide enough to put your little finger in;   others were perforated with a network of tiny tunnels, so that if you held one up you could see a thousand pinpoints of light. But how do these holes occur?   They are certainly not caused by the sea.   The culprit is a mollusc, and it is called a piddock.

WHAT ON EARTH ARE PIDDOCKS? 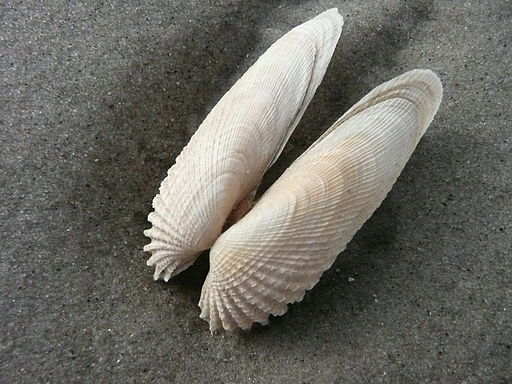 Piddocks are bivalves, and their specially-adapted oval shells are edged with fine teeth which they use to excavate burrows in rock.  Their fleshy foot grips the stone surface and helps to rotate the shell, creating a circular scouring action.   Piddocks will also drill into submerged wood, if it happens to be available.

Once the piddock has carved a safe tunnel for itself, it settles down inside and extends a siphon through the entrance, which it uses to filter food such as phytoplankton from the sea water.   Another siphon empties waste products back into the sea.   As the animal grows in size, it chisels at the walls of its rocky home to expand them. 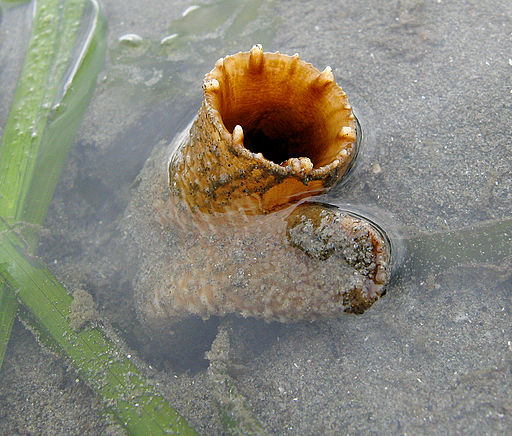 A snack bar for piddocks

Despite their tough-guy attitude, piddocks are elusive little things, and their shells are (amazingly) so brittle that, once exposed to the ocean, they are quickly broken up – which means that you are unlikely to find a whole piddock shell unless it’s still inside the stone.

However, if you’re walking along a beach and you pick up a pebble that is riddled with small holes – or one that looks like a half-inch drill bit has gone right through it – you’re probably holding a fine example of their handiwork. 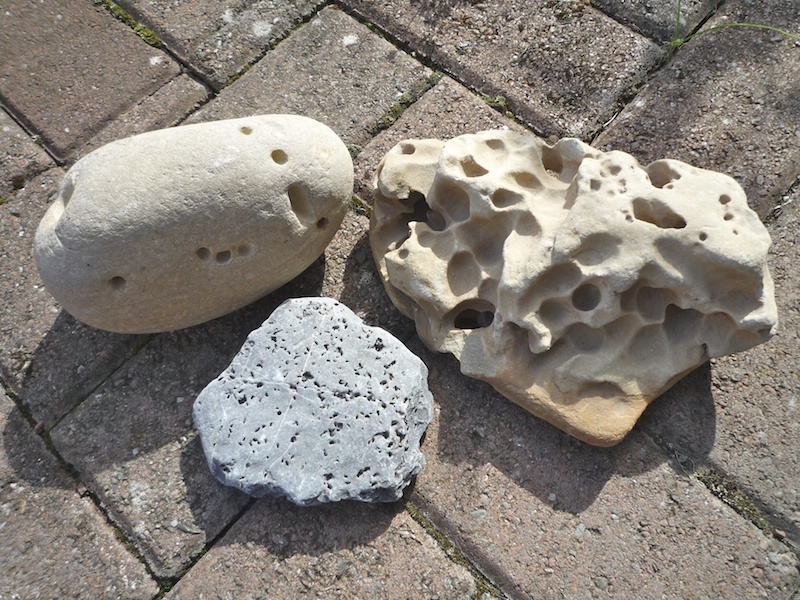 Several other species of mollusc, along with some worms and sponges, can also create holes in solid rock.  These examples may have been carved by a number of different species. 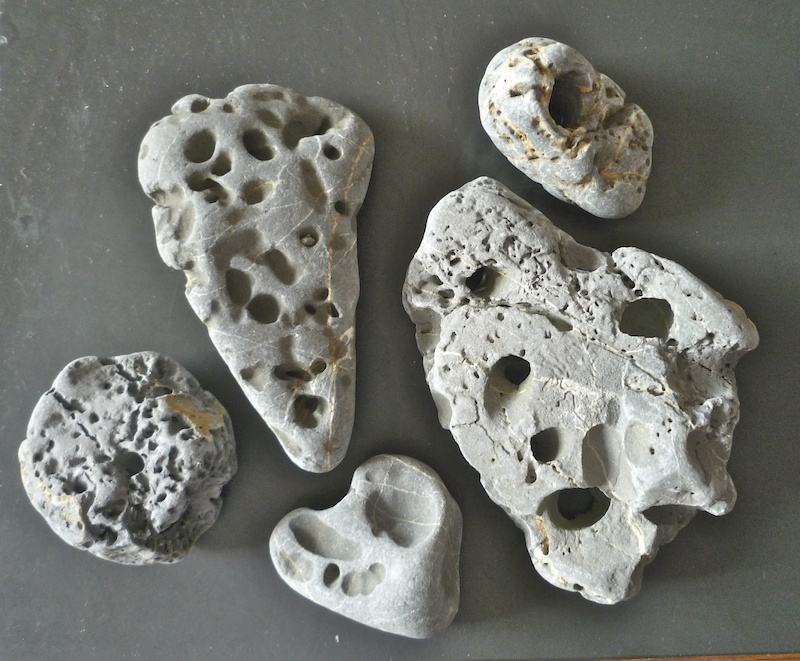 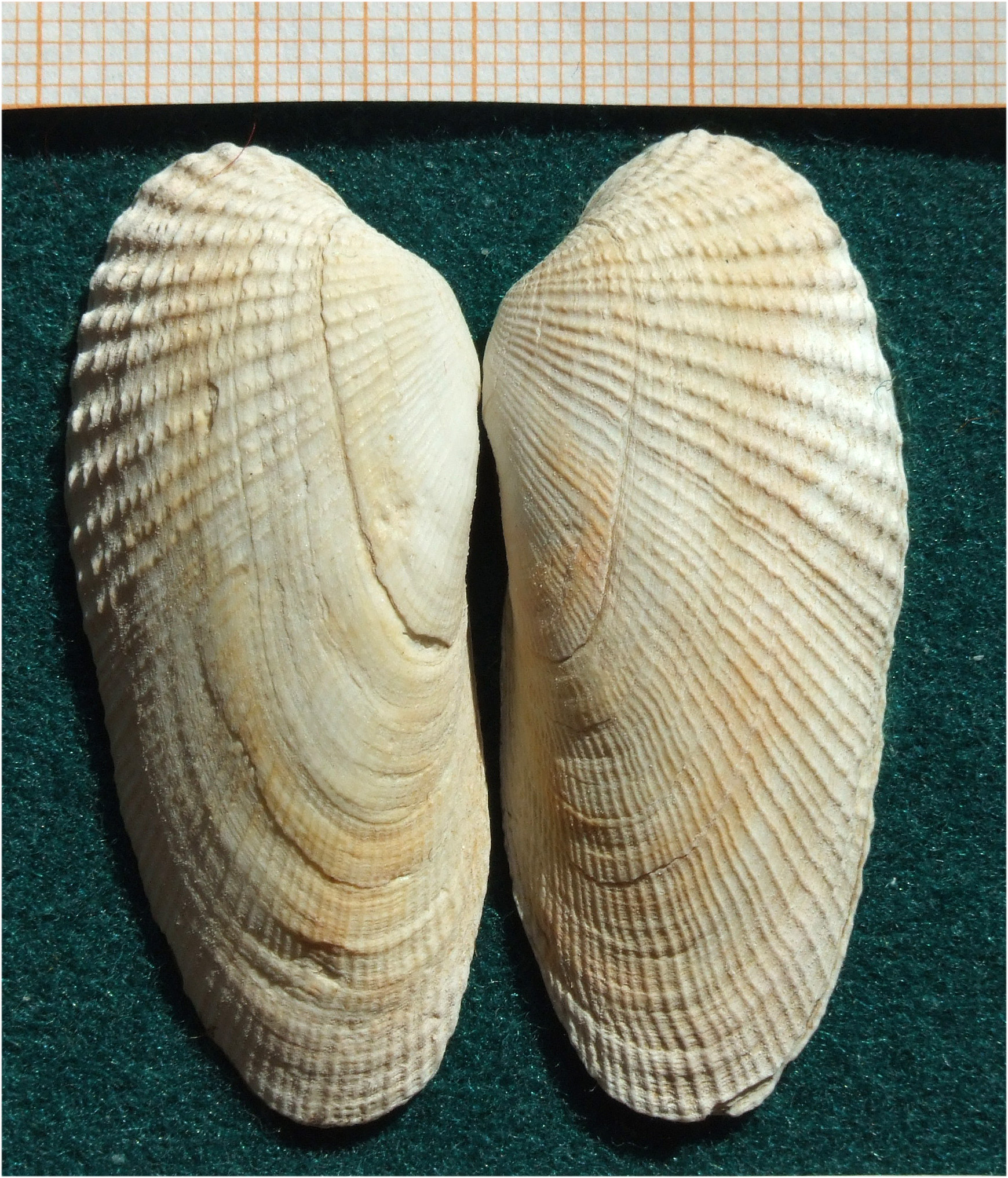 Piddocks are also known as Angelwings, which I think is a lovely name:   you can immediately see why, when their shell is opened out.  There are many species of piddocks, but the one that is native to British shores is the Common Piddock (Pholas dactylus).   Surprisingly, it can grow to 15 cm in length.

Now, here is a fascinating story:  piddocks in the genus Pholas are known to phosphoresce, or glow with a greenish light, in their burrows.  That is delightful enough!   But the 1905 edition of ‘The Victorian Naturalist’, the Journal and Magazine of the Field Naturalists’ Club of Victoria (Vol XXI), contains this startling announcement: “Pliny spoke of luminescence in the mouths of people who ate Pholas, the rock-boring shell-fish, and of such importance is this phenomenon that it is even said to have gained the first king of all Scotland his throne.”

If this is true, what a huge role for a humble mollusc!   Sadly, I can find no more information to back up the claim.   But that doesn’t stop my imagination from conjuring an interesting scene, perhaps at a banquet or even on a windswept rocky shore where the knowledge of ‘magical’ creatures might have given a vital edge to an early contender for Scotland’s crown. I shall look at piddocks in a whole new light from now on! 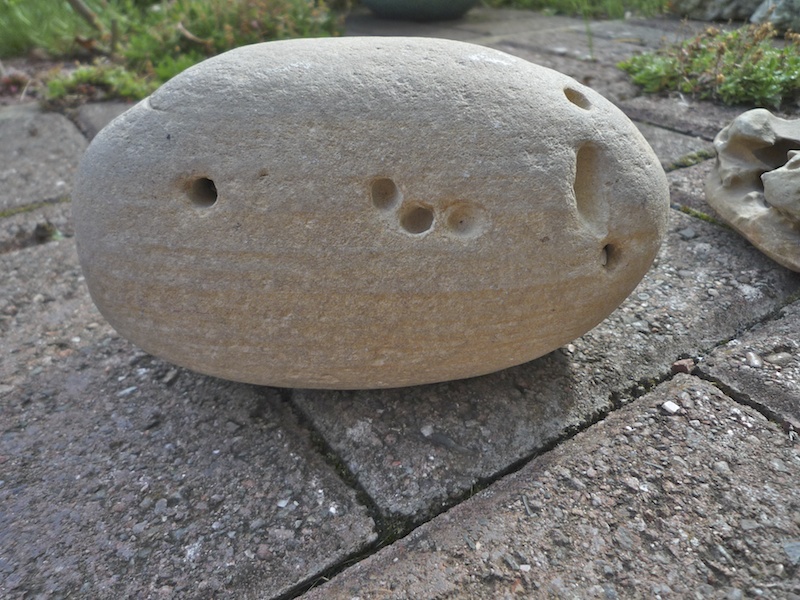 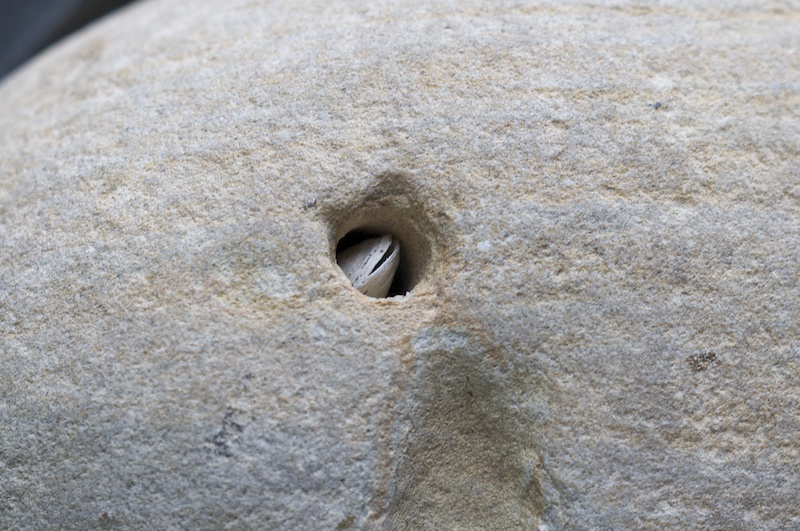 The wonderful thing about piddock art is that every piece is unique.   I have several treasured examples – one with a shell still inside, which rattles when you shake it.   If you tilt it, you can just see the tip of the piddock shell, but the burrow entrance is too narrow for it to drop out. 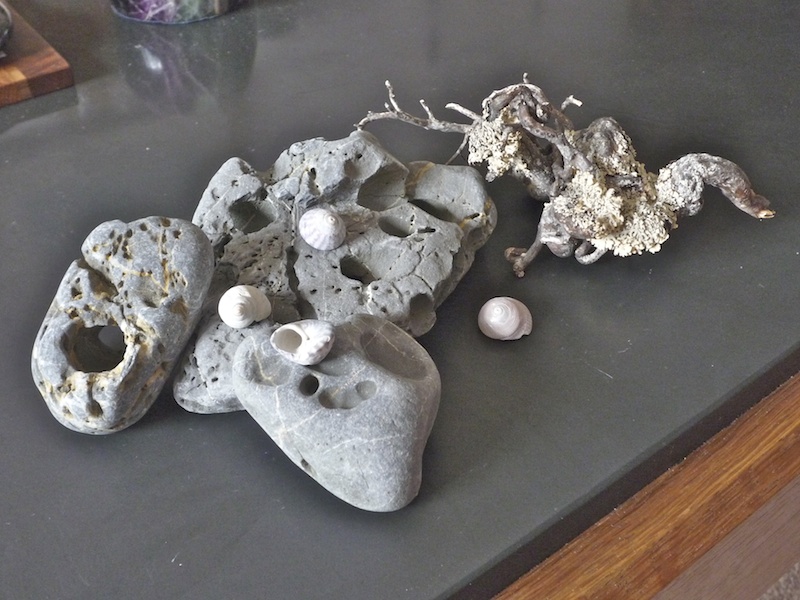 Piddock art gallery (the shells are top shells, not piddocks)

Piddocks aren’t the only molluscs capable of making holes in rock.   Several others, along with worms and sponges, are described by Jessica Winder in this wonderful post on her Nature Blog, illustrated with some superb photos taken on beaches in the south of England.   She also writes about piddocks, and has published some great photos of the creatures in action.

More examples of piddocks in various rocks can also be seen on the webpage of Japanese geologist Atsushi Chiyoda:  The poetry of boringshells

For more fascinating rocks, take a look at