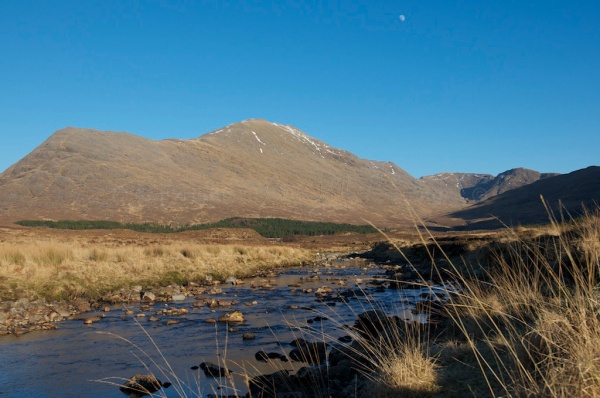 This is Scotland at its wildest – Knoydart, a peninsula in the north-west, which consists of nothing but mountains, rivers and forest with a few farms and cottages scattered around the perimeter.

Ladhar Bheinn, the mountain pictured here, is one of Knoydart’s Munros, rising to 3,346 feet;  geologists believe that the peak was almost completely covered with ice during the last Ice Age, leaving just a small pyramid of bare rock protruding above 3,100 feet.   This feature is known as a ‘nunatak’, and from some angles it is easy to see.

According to ‘Land of Mountain and Flood – the Geology and Landforms of Scotland’ by McKirdy, Gordon and Crofts:  “A line known as the periglacial trim line marks a boundary between frost-weathered rock on the summit… and ice-scoured bedrock along the ridge below.“ 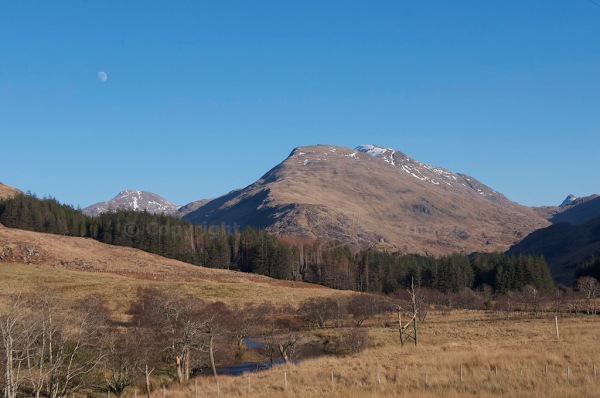 In the above image, the ‘nunatak’ is just visible with snow on it, to the right of and behind the central summit.   (Ladhar Bheinn is pronounced ‘Laa-ven‘.)

You can read about the geology of Knoydart and much, much more in a new book that has just been released: ‘Knoydart – Landscape, History, People’ by Joanne Woolf and Jim Manthorpe, and published by Madwolf Design;  ISBN 978-0-9556968-4-8.