Surrounded on three sides by vertical cliffs that drop 160 feet to the sea below, and accessible from the landward side only by a narrow gateway that was bristling with gun batteries, Dunnottar Castle must have presented a daunting prospect to any army with the unwelcome job of attacking it.

At first sight, Dunnottar takes your breath away, and it must surely have had the same effect on visitors – peaceable or otherwise – in centuries before.  This amazing fortress lies on the east coast of Scotland, just a couple of miles south of Stonehaven;   it has a long history of occupation, and at one time it was one of the most important castles in the country.   With its natural defences, it is tailor-made to withstand a siege.

Access to Dunnottar, even in the 21st century, is not the easiest.  You have to walk down a series of steep steps cut into the hillside, dropping down almost to sea level before ascending the castle cliff via an equally steep path.  This winds around the impressive wall of Benholm’s Lodging, with row upon row of gun loops bearing down on you – thankfully now empty of their weapons – and leads up to a dark, narrow passage that appears to be cut through the rock itself.  Inside the gate was once a portcullis, and the post holes still remain.  The castle’s approach feels forbidding, even now.

View from the beach

The first inhabitants of the peninsula on which Dunnottar stands were probably the Picts.  The Picts are among the most enigmatic people in history (and prehistory) because they left no written record – only a fascinating legacy of place names and stone carvings.  The rest is pure conjecture.   The ‘dun’ in ‘Dunnottar’ is Pictish in origin, meaning ‘hill fort’;  archaeological evidence suggests that the site has been occupied for two thousand years.

In the 5th century, St Ninian travelled around the east of Scotland and made a very good job of converting the Picts to Christianity.  St Ninian is another shadowy figure, but he is recognised as the earliest known Scottish saint, and he may have been a Briton who was educated in Rome.  Whatever his background, he must have had sackfuls of courage to tackle the strongly-rooted pagan beliefs of a warlike people;   it was St Ninian who founded the first church at Dunnottar.

The fortress is next mentioned as the setting for a battle between Donald II and Viking raiders in 900 AD, during which Donald was killed;  his body was taken to the sacred island of Iona for burial.  Much of northern Scotland fell to the Vikings during Donald’s reign.  The recent TV series by Neil Oliver has highlighted the Viking concept of honourable death in battle, and these seafaring raiders were well equipped both mentally and physically to take on the defences of Dunnottar.   They made good their victory by destroying the castle.

In the 12th century William I, otherwise known as ‘William the Lion’, established many royal burghs throughout the east of Scotland, and he used Dunnottar as an administrative centre.  In 1276, a Catholic chapel was built on the site of St Ninian’s original building;  but 20 years later, Edward I of England (the notorious ‘Hammer of the Scots’) took the castle by force.  It was down to William Wallace to regain Dunnottar for Scotland in 1297:   according to an epic poem by ‘Blind Harry’, a minstrel who entertained the court of James IV, Wallace burnt down the Chapel with the English garrison still inside.  I guess having scruples never got you anywhere in the 13th century. 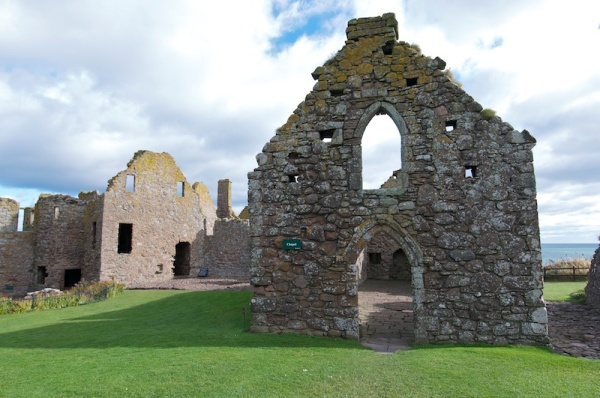 Dunnottar would change hands twice in 1336:   having fallen to the English king Edward III, who fortified it as a base for his northern campaign, it was re-taken for Scotland by Andrew Moray, whose father (also named Andrew) had fought and fallen by Wallace’s side at the Battle of Stirling Bridge. 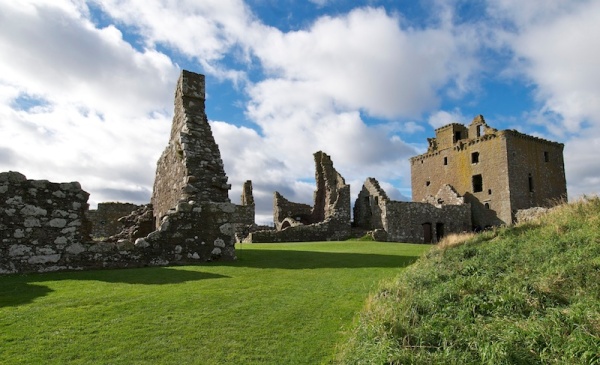 The tower house, at right

Traditionally, from about 1196, the title of ‘Marischal of Scotland’ had been bestowed on a senior member of the Keith clan.  William Keith acquired Dunnottar from William Lindsay of the Byres in 1382;   and in 1458, Sir William Keith, who had been given an earldom, became the first ‘Earl Marischal’.   His responsibilities included the protection of the king while he was attending parliament, and the safe keeping of Scotland’s crown jewels or ‘honours’.  Little did Sir William realise the resourcefulness which his descendants would need to fulfil their duties!   Sir William was responsible for building the castle’s imposing tower house or keep. 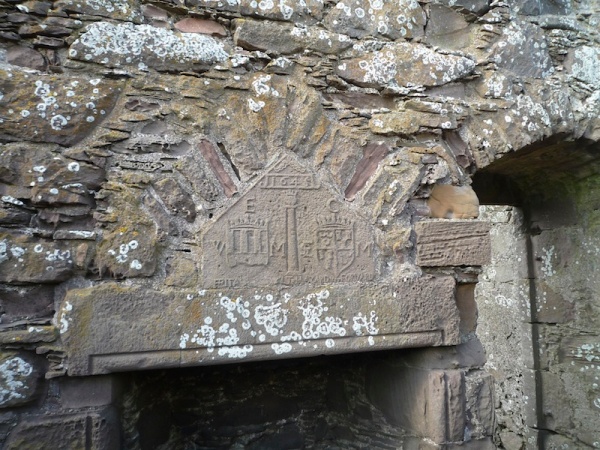 The prestige of Dunnottar was rising, and many influential visitors passed through its gates:  among them were Mary Queen of Scots and her son, James VI.   Between 1580 and 1650 work was put in hand to bring grandeur and opulence (and possibly a degree of comfort!) to the castle’s stark walls.   A carved crest over the fireplace in the Marischal’s suite dates from 1645 and bears the initials of William, the seventh Earl, and Elizabeth Seton, his wife.

Dunnottar had become a family home, but the serenity didn’t last for long.   While the stonemason was finishing the last intricate details on the fireplace carving, Civil War was already ripping the peaceful English landscape apart, and the conflict would soon spread north of the border.  In January 1649 Charles I was executed, and Oliver Cromwell succeeded him as Lord Protector of the Commonwealth.   Three years later, Dunnottar was the last remaining royalist stronghold in Scotland.

Charles II, the son of Charles I, had been crowned in haste at Scone, but the crown, sceptre and sword used for the ceremony could not be returned to their rightful place in Edinburgh because the city was now occupied by enemy troops.   Cromwell, having destroyed the majority of the English crown jewels, was desperate to seize Scotland’s symbols of monarchy. 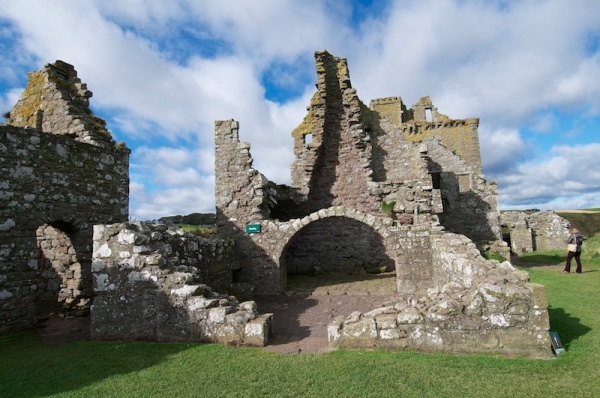 The Smithy or ‘Smiddy’

With Cromwell on the march northwards, Charles II ordered the Earl Marischal to take the priceless jewels to Dunnottar, and conceal them there.   The invading army camped outside the castle for eight months, held in check by an occupying garrison of ‘aged’ soldiers numbering only 70 in total.  Their bravery could not withstand the arrival of heavy cannon, however, and after ten days of bombardment these hardy retainers were forced to surrender.  Reports say that they were allowed to leave unharmed.

The tower house or keep

But where were the honours?   Cromwells troops searched in vain, and they must have been close to tearing their moustaches off in frustration.   The jewels had been smuggled out of the castle, and there are two conflicting accounts of their dramatic exit.  One story suggests that they were lowered down the cliff to a servant who was pretending to collect seaweed from the rocks, while another claims that the local minister’s wife smuggled them out of the castle in a parcel of flax.  Whatever the means of transport, the honours were then buried at nearby Kinneff church and remained hidden for 11 years, until the crown was restored to Charles II in 1660.

A grim chapter in Dunnottar’s history came in 1685, when 122 Covenanters, comprising both men and women, were imprisoned in the Whigs’ Vault below the quadrangle.  Their ‘crime’ was in questioning the Divine Right of Kings, and they objected to Charles’ interference in the Presbyterian Church of Scotland;  in effect, they believed that no one, except Christ, was head of the Christian church.  For two months they languished in a dark cellar with no sanitation and little food;  some of them relented and took the oath of allegiance, but others attempted to escape.  A few were successful, while others were either re-captured or fell to their deaths.   The remainder were deported to the West Indies, but many died of disease either during or after the voyage.

It was George Keith, the 10th Earl Marischal, who set the seal of doom on Dunnottar’s future.  In 1715, he supported the ‘Old Pretender’, James Stewart (the father of Bonnie Prince Charlie) in the first Jacobite uprising;   however worthy the cause, the Jacobites’ efforts were in vain and their supporters lost their lands as a result.  Keith was convicted of treason, and Dunnottar was seized by the British crown.   Everything that was either valuable or useful was stripped from the castle, and it was left to fall into spectacular decay.

Finally, in 1925, the property was acquired by owners who saw the need of an extensive repair programme, and some well-overdue restoration work was carried out.

And what about the supernatural?   Surely any ghosts lurking around the walls of Dunnottar have long since been blown away?   Apparently not.  A young girl dressed in green has been seen in the bakery;  she then goes to a doorway by the brewery and vanishes.  A tall Scandinavian-type man has been witnessed going into the guardroom, and a ghostly deerhound has been sighted near the tunnel.   Voices have also been heard coming from Benholm’s Lodging, which overlooks the entrance gate.   An investigation was conducted by a team from Paranormal Discovery, but although they sat around for a long time in cold, dark places they didn’t gain much evidence apart from unexplained ‘bumps’ (goosebumps?), a faint blue mist and some eerie shadows.

For my own part, I was vaguely uneasy around the entrance tunnel and again in some of the dark chambers beneath the keep.  I attempted to dispel this feeling by extending my camera at arm’s length into pitch black cavities and clicking the shutter, but the resulting flash (unintentional – why do I never learn?) probably fried the sensibilities of any self-respecting spectre that might have been enjoying the peace and quiet.  It is deliciously tempting to imagine the castle at night, when all the visitors and admission staff have gone home, and the ruins are bathed in moonlight. 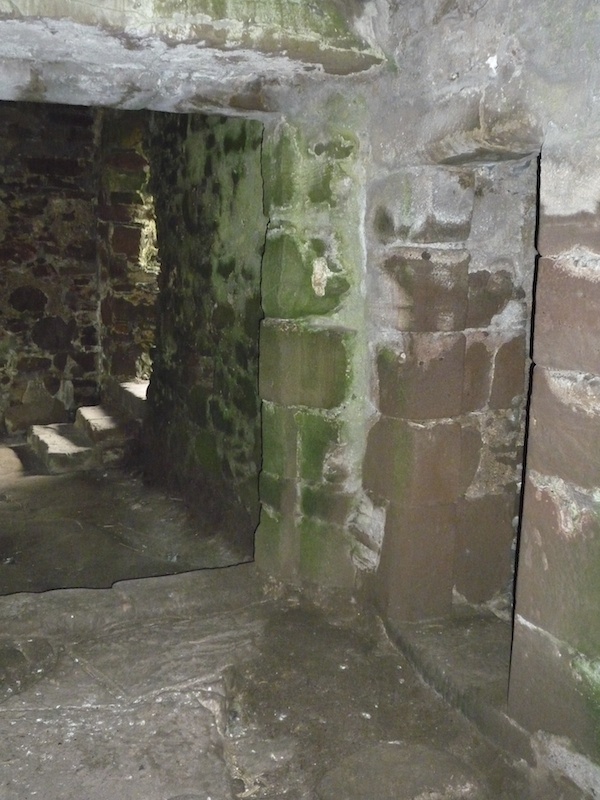 View to the north, of Castle Haven 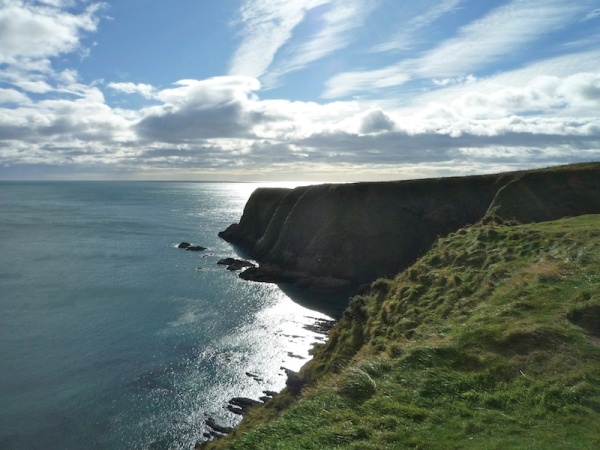 Dunnottar Castle lies a mile or so south of Stonehaven in Aberdeenshire.  It is privately owned and is open daily, weather permitting (it is often forced to close in high winds).   More information at www.dunnottarcastle.co.uk

New book 'Britain's Trees' to be published in March 2020