We visited Edinburgh Castle for the first time in January this year, and it was even more awe-inspiring that I expected.

What is so often overlooked, however, is the history that lies in the detail.  Beautiful gilded scrolls and crests adorn windows, gateways and even downpipes;  intricate designs in leaded glass are inset into window panes, while statues of former kings flank the impressive Portcullis Gate.  So many features tell a story in their own right… 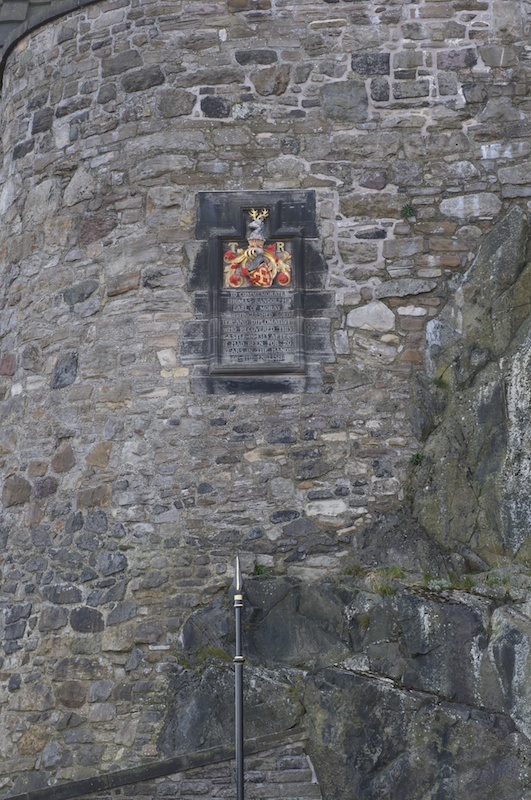 A plaque on the outer wall, by the main entrance, reads:

To commemorate Thomas Randolph, Earl of Moray, distinguished soldier and diplomatist who recovered this castle in 1313 after it had been for 20 years in the hands of the English.

Edinburgh Castle had been captured by English forces under Edward I in 1296.  Thomas Randolph, who is believed to have been a cousin of Robert the Bruce, made a daring attack on the fortress in March 1314.   He was leading only 30 men, but among them was the son of a former Governor of the castle, who knew of a way to enter it unseen, under cover of darkness.  Against formidable odds, Moray was successful in winning back the Castle for Scotland;  he later distinguished himself at the Battle of Bannockburn.

I’m not sure if the term ‘diplomatist’ refers to the fact that Moray changed sides twice:  when he was captured by the English in 1316, he apparently helped Edward I search for Bruce.  On being taken prisoner by Sir James Douglas, Moray changed his loyalties back to his kinsman.  Perhaps his moral flexibility was an advantage, or even a deliberate tactic:  he would surely have been executed by the English if he hadn’t complied, and his bold coup at Edinburgh Castle would never have taken place. 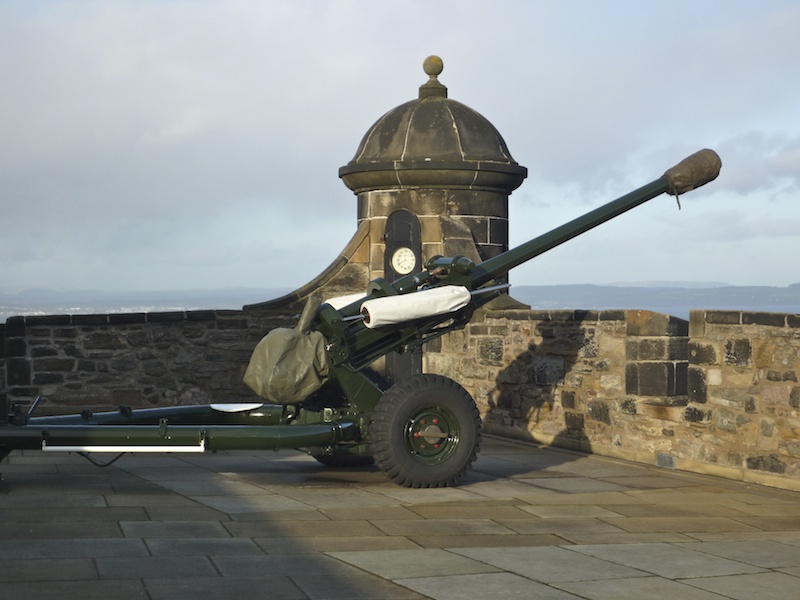 The One o’Clock Gun is fired every day at… one o’clock.  It was originally set up in 1861 as a time signal for shipping in the Firth of Forth.  A time ball had been placed at the top of the Nelson Monument on Calton Hill in 1851, but this was not visible when it was foggy.

The original gun was an 18-pound cannon, which required four men to load;  various other types of cannon superseded this, including a 25-pound Howitzer in 1952.  In 2001 a 105 mm light gun was brought into service.  The gun is fired daily except Sundays, Christmas Day and Good Friday, from its position on Mill’s Mount Battery.  It is a regular feature of life in Edinburgh, and there is even a One o’Clock Gun Association! 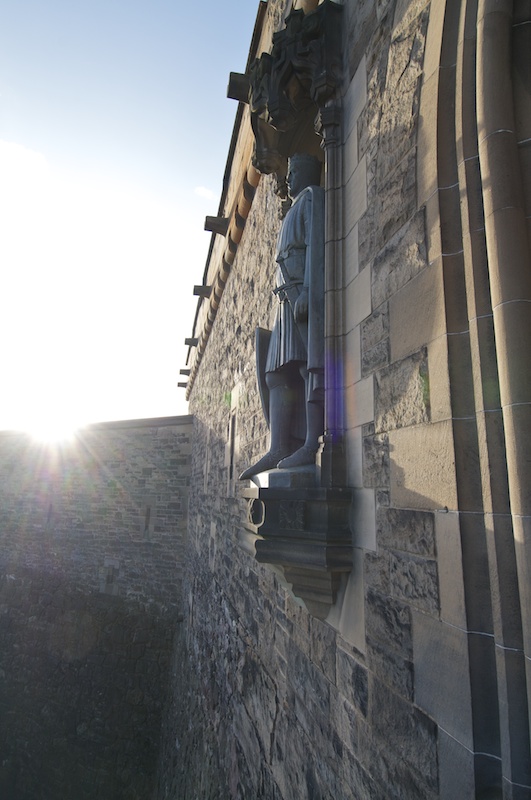 A statue of Robert the Bruce surveys all the visitors who pass under the Portcullis Gate.  David’s Tower in Edinburgh Castle was built by David II, son of Robert the Bruce.  Begun around 1367 and completed by David’s successor, Robert II, the tower is now in ruins, having been destroyed during the ‘Lang Siege’ in 1573;  the Half Moon Battery was built on top of it. 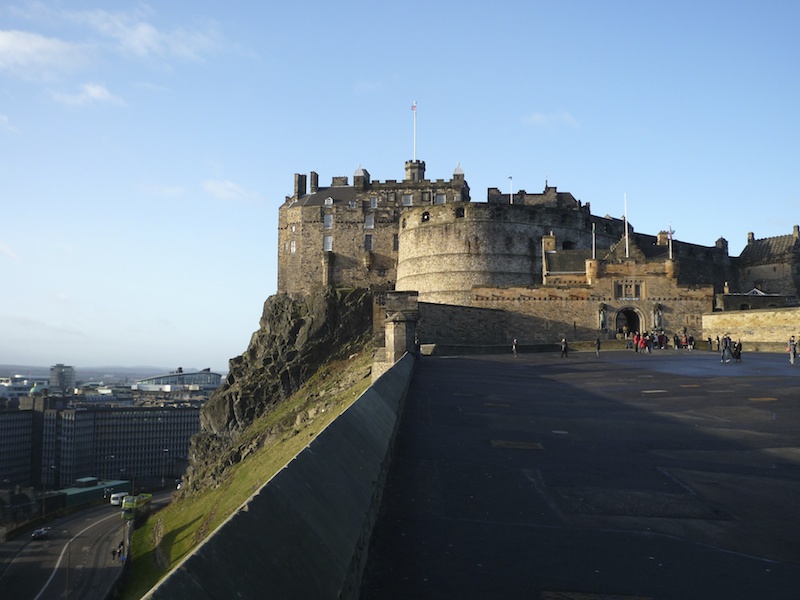 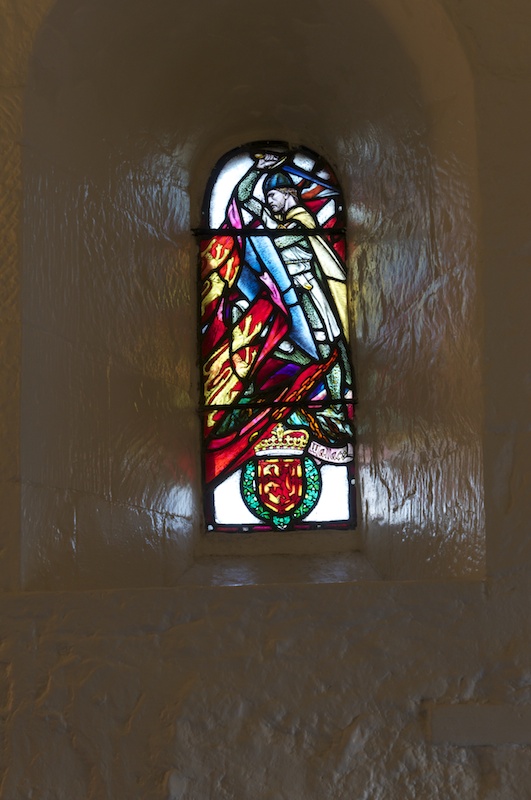 A window commemorating William Wallace is inset into the thick walls of St Margaret’s Chapel.  The oldest building in Edinburgh, the beautiful little chapel was founded by Queen Margaret’s son, David I, in 1130, in memory of his mother.  You can read more about St Margaret’s Chapel in an earlier article. 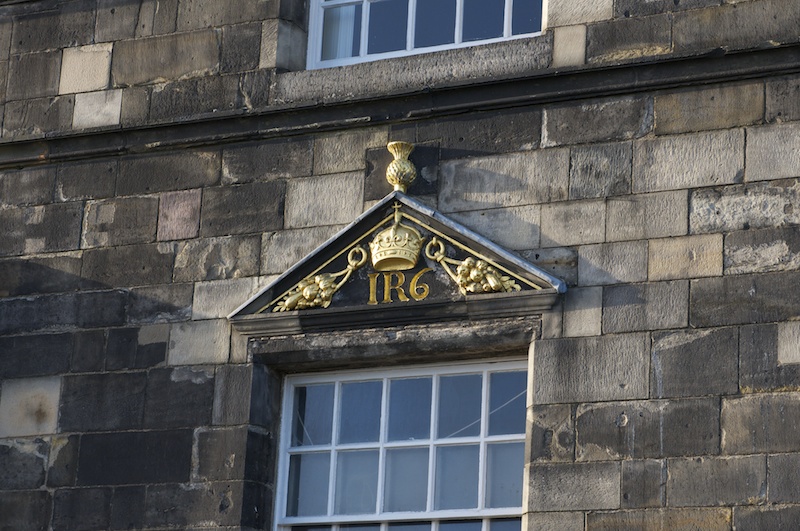 A scroll above a window commemorates James I of England and VI of Scotland, who was born at the Castle in 1566.  His mother was Mary, Queen of Scots. 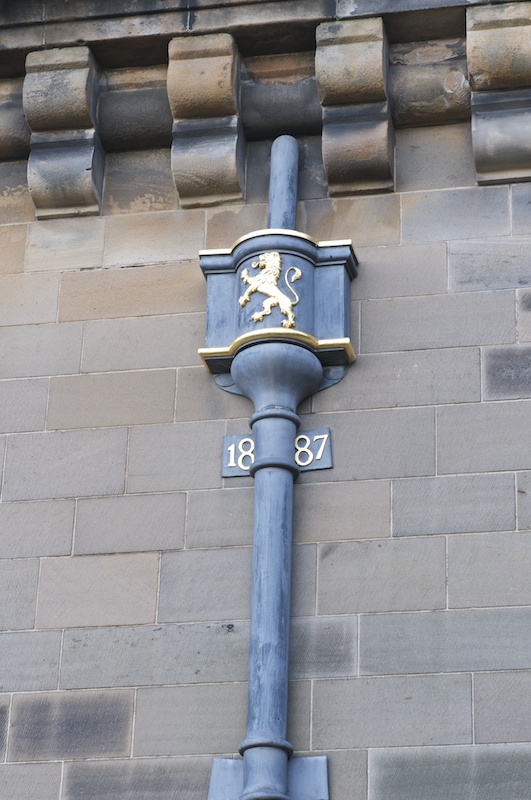 The Portcullis Gate was begun in the late 1500s, but its upper section was replaced in 1887 by a Scottish baronial-style structure known as the Argyle Tower.  This lead downpipe bears the date 1887 and a gold lion of Scotland. 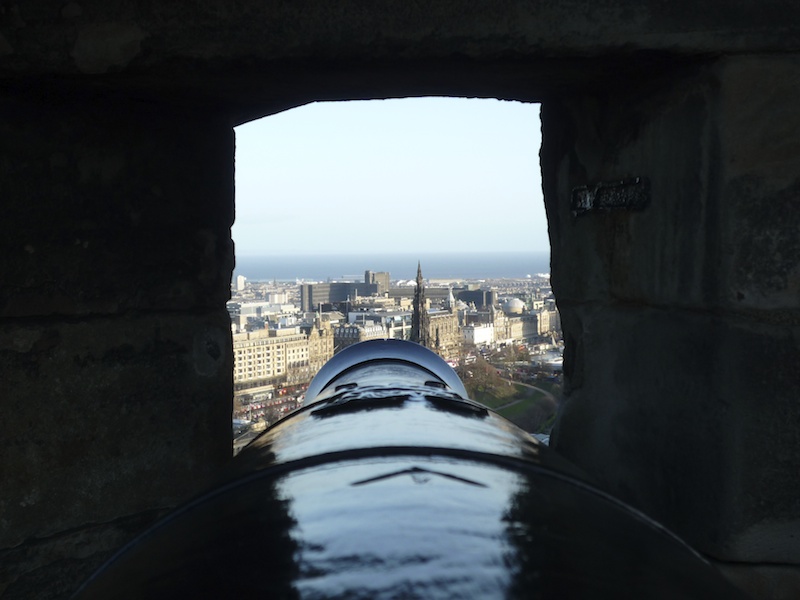 The six 18-pound cannons on the Argyle Battery were built during the Napoleonic Wars, around 1810.  These guns, together with those on the lower defences and Mill’s Mount Battery to the west, provided a daunting defence of the northern ramparts.

In this photo (above) you are looking down the barrel of a cannon, directly at Scott’s Monument, Princes Street and the Firth of Forth beyond. 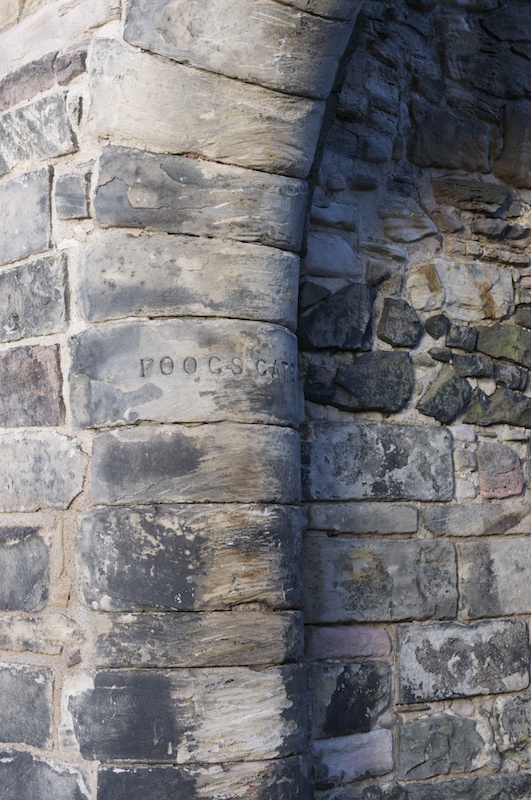 The name ‘Foogs Gate’ is carved into the archway over the entrance to the Upper Ward, the highest part of the Castle.  The origin of this name is – literally – foggy.  Some historians believe that it may refer to the dense sea fog or ‘haar’ that often engulfs the city of Edinburgh. 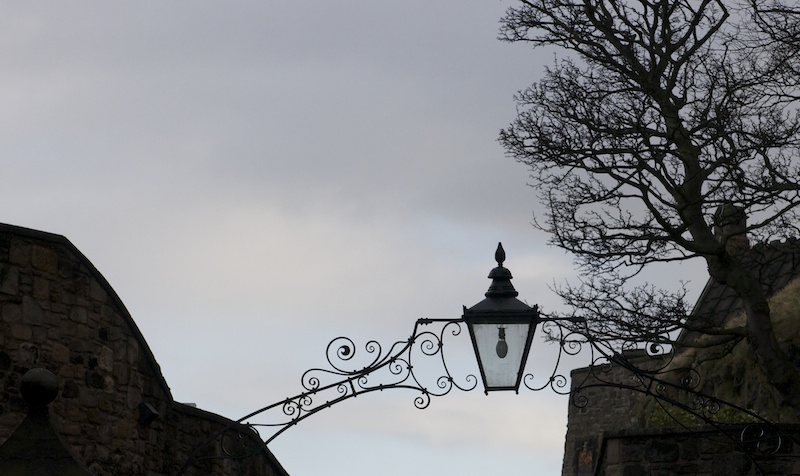 I don’t know if there is a story behind this lovely scroll with its central lantern;   I just liked the shape! 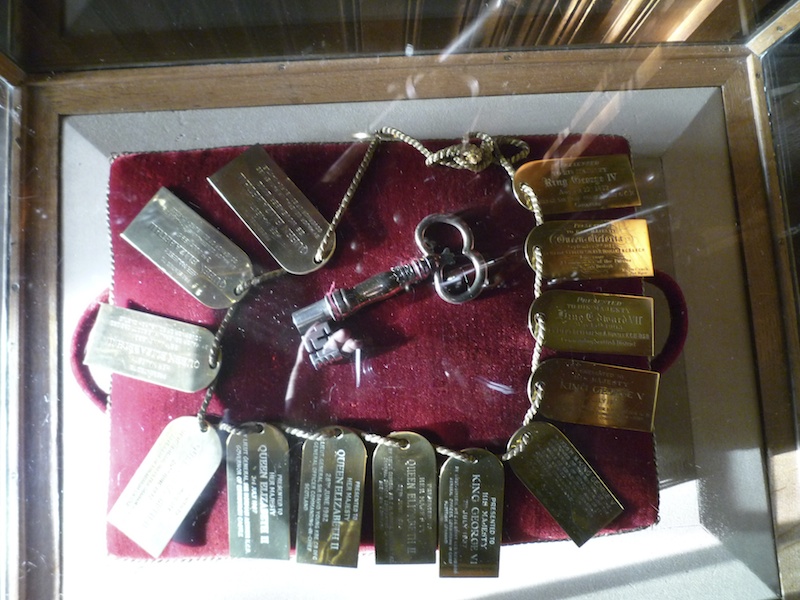 This is the key to Edinburgh Castle, and the metal tags refer to its illustrious owners over the years.  In 1953, the Queen and Prince Philip arrived at the Castle by State Landau, to be officially presented with the key.  I’m pretty sure it wouldn’t have fitted it into Her Majesty’s handbag! 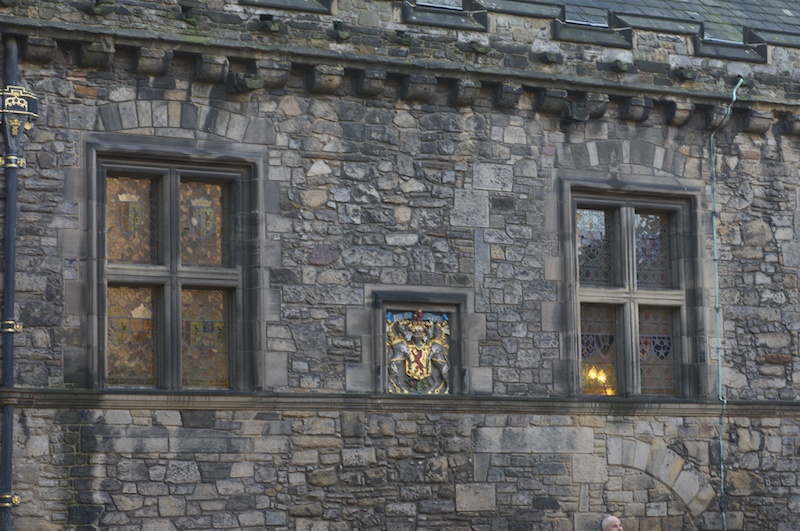 Beautiful stained glass windows, seen from the outside.  In the shield at the centre of the gilded coat of arms is a red lion, the symbol of James VI of Scotland. 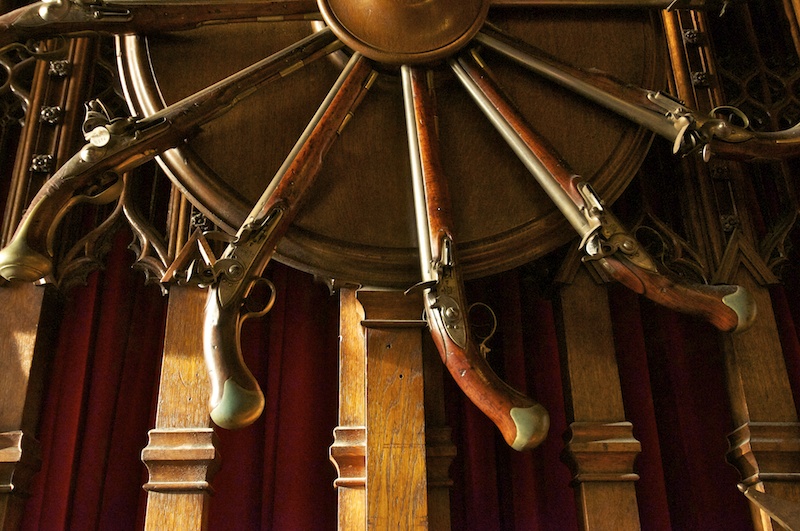 (above):  Pistols displayed in the Great Hall, which was begun in 1511 by James IV.  The last reigning monarch to reside in Edinburgh Castle was Charles I, on the night before his coronation as King of Scots in 1633.

This is a view of the Great Hall with its medieval hammerbeam ceiling.  To the upper right of the fireplace at the far end, you can just make out a black square which is, in fact, a small opening with an iron grille over it.  Known as the ‘laird’s lugs’, it was used by James IV to spy on his courtiers without their knowing.  And we thought ‘Big Brother’ was a modern invention!

There’s so much more to Edinburgh Castle than I’ve covered here.  Read my post on the massive siege gun called Mons Meg, and take a look at St Margaret’s Chapel, the oldest building in Edinburgh.