Down on the south-west arm or ‘Ross’ of Mull, just before the village of Bunessan, there’s a signpost off the main A849 which says simply ‘Scoor’.

It doesn’t look like a through road to anywhere, and it’s not;  after passing a couple of farms and a lochan, the narrow road deteriorates into a track which leads over rough ground with peat bogs, rocky outcrops and a few hardy, well-weathered trees.

We first visited Scoor about 15 years ago, in search of its amazing beaches; but when we returned in April last year, we noticed a ruined church set in a slight dip, a couple of hundred yards away from the track.

This is Kilvickeon Old Parish Church, built in the late 12th or early 13th century, and dedicated to Ernan, son of Eoghan, nephew of St Columba.

Only two of its walls are still standing, and both are well on the way to being reclaimed by nature. Ferns, grasses, lichen and stonecrop are growing around and over the large slabs of sandstone, thought to have been carried from nearby Carsaig.  Stone pegs within the walls suggest that the original building was thatched;  the pegs would have secured the roof against Atlantic gales.

According to the Mull Historical Society’s website, the architecture of Kilvickeon is similar to that of the much better-known St Oran’s Chapel on Iona.

There’s still an archway in the north side, and the door would have been secured by a draw-bar that rested in sockets at either side.  A very weathered, carved stone to the left of the arch is thought to be a ‘sheela-na-gig’, a medieval figure believed to promote fertility or to fend off evil spirits.

The Royal Commission on the Ancient and Historical Monuments of Scotland says:  “Almost nothing is known of the early history of this church, which was evidently one of the seven medieval parish-churches of Mull.”

According to the Mull Historical Society, the interior of the church was divided into a nave and chancel, and the holes for a timber screen are still visible. (We saw no evidence of these, but to be fair, at the time we didn’t know what we were looking for!) In the nave, a grave slab dating from between 1500 and 1560 bears the inscription HIC IACET MARIOTA FIL IA… (here lies Mari(o)a, daughter of…) 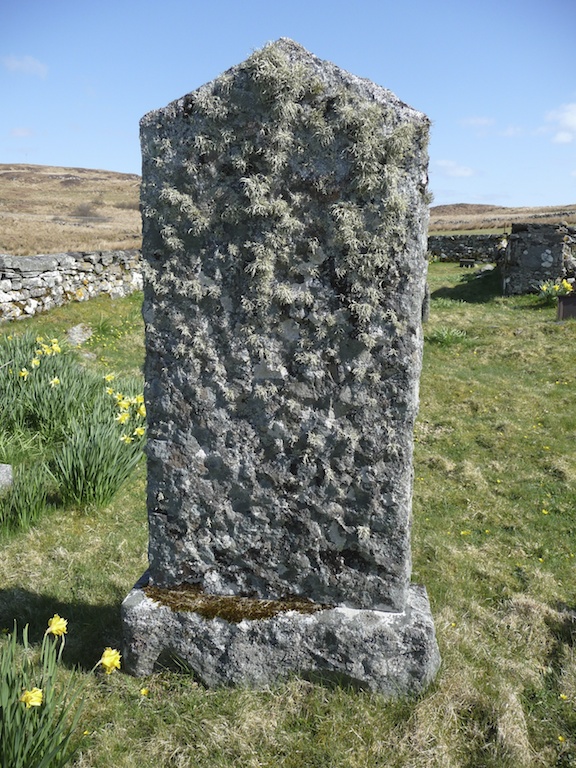 In the surrounding churchyard, most of the older grave stones are either so badly eroded or bedecked with lichen that the epitaphs are impossible to read.

However, clan names recorded at Kilvickeon include Macdonald, Mackinnen, MacLean, McNeil and Cameron.  The most recent grave is dated 2002, with a headstone that looks very much more modern than its surroundings.

A whole community’s life is recorded here:  engraved symbols on some of the older stones commemorate a cartwright, sailors, cattle dealers, and a merchant. There are also two graves of unknown merchant sailors who died in the Second World War.

Surprisingly, in 1791 over 3,000 people were recorded as living in the parish, and the incumbent, Dugald Campbell, described them as ‘sober and industrious.’ Mr Campbell is buried in the graveyard, as is his daughter.

By 1795 the weather had finally got the better of Kilvickeon, and a few years later a new church was built in Bunessan, using some stones from the original site. But the ancient spirit of the place lives on, because the Mull Historical Society says that the church is still used occasionally.

A track leads down to the shore, where, on a fine day, the most dazzling white sands give way to clear blue-green seas, and the distant mountains of Jura can just be made out on the horizon.

On a grim day in winter, when it’s dark and drizzly at half three in the afternoon and I’ve forgotten why we moved to Scotland, I look at these photos and then I remember.