At the end of a stony track in the north-east of Islay, surrounded by low hills and remote from civilisation, the perfect solitude of Loch Finlaggan is disturbed only by geese, curlews and grazing cattle.

What strikes you most is the wild tranquillity and the wide-open sky, reflected in the gently rippling waters of the loch.  But it wasn’t always so quiet.  700 years ago, into this unforgiving, windswept landscape of peat bog and heather, the chieftains of western Scotland, along with their bishops, priests and clansmen, travelled to witness an important ceremony:  the inauguration of the Lord of the Isles.

The inauguration ceremony, equivalent to a coronation, would have been an occasion of solemnity but also great feasting and celebration.  It took place on one of the islands in the loch;  at least one of these islands is thought to be man-made, and there were jetties and walkways from the opposite shore.  The new Lord of the Isles would place his foot on a special stone which bore the impression of a footprint, thereby swearing to follow in the footsteps of his illustrious forebears.  Instead of a sword he held a rod, symbolising discretion and sincerity;  and he vowed to protect his people from all invaders.

Who were the Lords of the Isles?

The Lords of the Isles rose to power in the 1300s, and were descended from Somerled, a 12th century nobleman and warrior.  Somerled is believed to have been half Gaelic, half Norse, and after a series of victories he declared himself King of Man and King of the Isles, effectively becoming the ruler of the western side of Scotland and its islands.  He was killed in battle by the Scottish king Malcolm IV, but not before he had founded a dynasty of rulers whose seat of power was Finlaggan on the Isle of Islay.

From these Lords of the Isles – Angus Mor, Angus Og, John, Donald, Alexander – the clan MacDonald is descended;  anyone bearing that surname can claim a distant relationship.  Other clans associated with the Lordship include MacKay, MacPhee, and MacEachern or MacKechnie.

On Eilean Mor, the larger island, are the remains of a great hall, along with 16th century houses, kilns and barns.  The smaller island, Eilean na Comhairle, is where the Lords of the Isles held their council, making laws, creating land charters and passing judgements.

What has puzzled historians for so long is why an inland loch was chosen, in preference to a more accessible sea loch.  The answer must lie in the sanctity of the place, revered for so many centuries that it must have seemed ancient even to the first Lord of the Isles, John of Islay.

In his book ‘The Lands of the Lordship‘, the Islay-based historian Domnhall MacEacharna describes the settlement in the time of the Lords of the Isles:

“A garrison was maintained on Loch Gorm… and another on Fraoch Eilean (‘heather isle’) in the Sound of Islay.  There was also a summer palace beside the present Kilchoman Church.  Their principal harbour was at Traigh an Luig – ‘strand of the hollow’ – just north of Goirtean, while the elite corps of soldiery, the Luchd Tighe or ‘folk of the household’, had their barracks on the loch side just below the present Finlaggan Farm.”

Excavations at Finlaggan have taken the settlement further and further back in time;  the council chamber was built on the remains of a 13th century castle, which in turn seems to have been built on top of an Iron Age fort.

A chapel on Eilean Mor was dedicated to St Finlaggan (or Findlugan), who originally hailed from Ireland, and is credited with saving the life of St Columba.  In 585 AD, St Finlaggan was the abbot of a monastery near Lough Foyle in Ireland, and he is then believed to have crossed the Irish Sea to Scotland, making landfall either on the Garvellachs or on the island of Jura.

But even that is not the earliest clue:  the discovery of a bronze enamelled brooch dating from the 4th century BC suggests that Finlaggan was occupied a good 1,600 years before the rise of the Lords of the Isles, and more recent finds point to occupation during the Stone Age.  It’s a really tantalising picture. 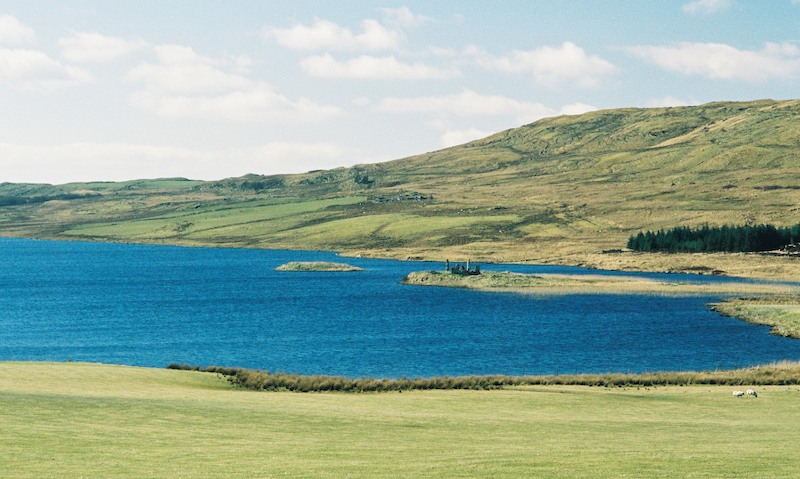 You can visit Eilean Mor at any time, by walking along a farm path and over a boardwalk to the island.   Some ruined walls are still visible – most of these date from the 16th century, and would have been houses or farm buildings.   One grave slab has been identified as that of a child, another of a warrior.

On the shore of the loch is a modern visitor centre, converted from an old bothy.  This is open throughout the summer, and contains displays of archaeological finds and lots of information about this wonderful place.

There’s a lovely atmosphere at Finlaggan, and unless you visit in the very height of summer you will probably have the place to yourself.  There are no panoramic views – in fact, the gently sloping hills around the loch seem to focus inwards on the centre – but maybe this was what made the site sacred and special to its early inhabitants.   It feels secluded, protected, secret.

Although excavations and studies can suggest much about the purpose of Finlaggan, we can only guess at the thoughts, hopes and feelings of the people who lived and travelled there.   That’s what I love about sites like these… they hold the fragments of so many stories, and as we walk around the ruins all we can do is try to peer through the veil.