At this time of year, wildfowl are arriving at in their thousands at Loch Leven, the largest loch in the Scottish Lowlands.

More than 20,000 pink-footed geese and smaller flocks of greylags stop over at Loch Leven;  some stay for the winter while others move on to feeding grounds further south.  They’re joined by smaller numbers of white-fronted, bean, barnacle and brent geese, and the sight (and sound) of so many birds in the air, especially around sunset, is spectacular.

All three species of swans – mute, whooper and Bewick – are present in the autumn, and in October 2010 the loch was a mass of white dots as many hundreds of whoopers fed in the shallow waters. Many thousands of ducks arrive as the winter approaches, some travelling from Iceland, Scandinavia and Russia.

The average depth of Loch Leven is just under four metres, but researchers have found evidence of three ‘kettle holes’ up to 25 metres deep in the loch bed, formed by huge chunks of ice from melting glaciers. The shallow, reedy fringes of the loch are ideal for dabbling ducks like mallard, shoveler, teal and gadwall.

Loch Leven is dotted with islands, the largest of which, St Serf’s, provides habitat for up to 600 pairs of tufted duck and several hundred pairs of mallard, accompanied by smaller numbers of shelduck, pochard and shoveler.  There’s also a noisy colony of black-headed gulls.

The extensive shoreline and marshes surrounding the loch are a haven for waders:  curlew, oystercatcher, redshank, snipe, ringed plover, sandpiper, dunlin, greenshank, ruff, little stint and black-tailed godwit have all been recorded there. 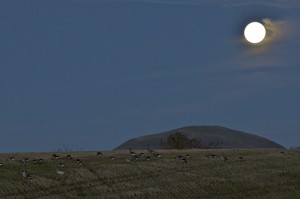 Greylags feeding under a full moon

When the level of the loch was lowered in 1830 in order to regulate the water supply to nearby mills, migratory salmon and sea trout could no longer swim upriver from the Forth, and the population of eels and Arctic char also disappeared.

However, Loch Leven still attracts many fly fishermen because it contains a unique sub-species of brown trout, Salmo levenensis.  Prized for its dark colour, this trout has been introduced to Canada and New Zealand but apparently it inter-breeds freely and the strain is then lost.

Mary Queen of Scots has already cropped up in another article;  she seems to have stayed in most Scottish castles, voluntarily or otherwise!  In 1567 she was imprisoned in Loch Leven Castle, which stands on one of the islands in the loch, but she later managed to escape by boat, aided by one of her former captors.

St Serf’s island was home to an Augustinian monastery in the 12th century, founded by David I of Scotland.  The island is fairly inaccessible, and it is now a bird sanctuary. 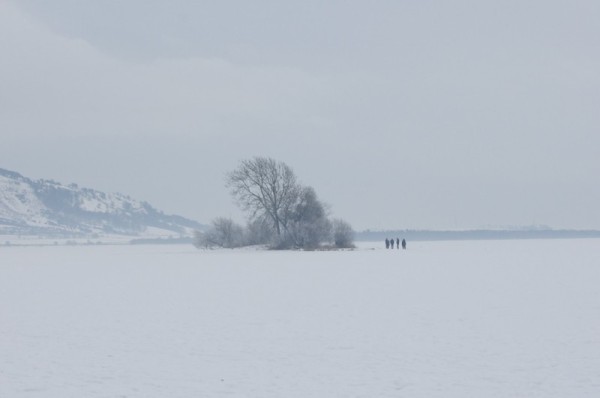 Last winter the waters of Loch Leven froze solid;   it was an amazing sight, contrasting with the milder scenes that we photographed in late October.  Some people had walked out to one of the islands, and a kind of freezing fog was hanging over the surface.  Few of the ducks and geese remained – most had flown further south in search of unfrozen ground. 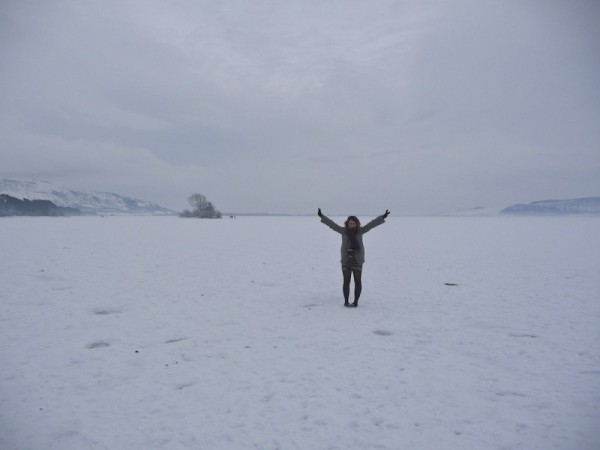