When we lived in North Wales, if we had an afternoon free and the weather was fine we often headed for Harlech beach.

Harlech was just over half an hour’s drive away, and it was fabulous.  A big, wide sweep of clean sand, safe breakers to swim in (although they sometimes took your breath away!), and hardly any people, especially on a weekday in May or June.

To get to there, you have to walk through an area of dunes and heathland, and this was often alive with butterflies.  The dunes hold a wide variety of wild flowers, some of which are quite uncommon;  a large expanse of the coastline is now a National Nature Reserve while smaller, specific areas are protected as Sites of Special Scientific Interest.

Overlooking the shore from a distance is Harlech Castle, one of Edward I’s many fortresses built between 1283 and 1289 to reinforce his hold on Wales;  but in 1404, Harlech Castle was captured by Owain Glyndwr, who was fighting for Welsh independence, and he held it during a long siege – an event which inspired the rousing traditional song ‘Men of Harlech’. 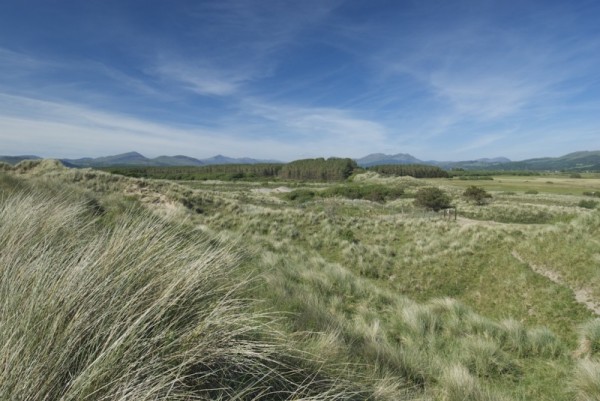 At the time when Harlech Castle was built, the sea lapped around the high rocky outcrop on which the building stands, but now it’s at least a mile inland.  The reason for this is that the sand dunes at Harlech are growing, fed by the wind and tides.  This process must have been going on for hundreds of years, and once the dunes are formed they are colonised, first by low-growing plants that will tolerate sand and drought, and then by shrubs and trees. 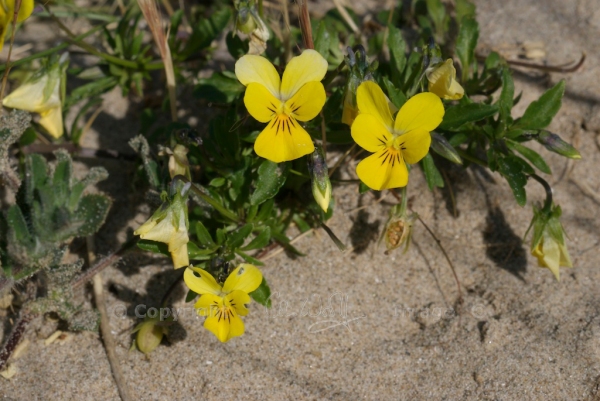 Harlech is a great place for walking, beachcombing and kite-flying;  there’s even a championship golf course that runs alongside the dunes.  On a clear day, there are wonderful views right up to Porthmadog and along the Llyn Peninsula in the north-west, and down to Shell Island and Llandanwg in the south.

The beach at Harlech is part of the wide, curving sweep of Cardigan Bay, which extends from Ramsey Island in the south right up to Bardsey Island in the north.  Cardigan Bay is the setting for a fascinating and ancient legend, which tells of a sunken kingdom known as Cantre’r Gwaelod, or ‘the Lowland Hundred’…

According to folklore, in about 600 AD Cantre’r Gwaelod extended 20 miles out into Cardigan Bay and was an area of rich farmland ruled by a king called Gwyddno Garanhir (‘Longshanks’).

Because the land was below sea level, the inhabitants relied on a system of dykes with sluice gates, which were opened at low tide and closed again as the tide flowed back. A story tells of how, one night, during a severe storm at the time of a spring tide, a watchman called Seithennin drank a few too many tankards of ale and fell asleep on duty, thereby allowing the incoming tide to breach the water gates and inundate the land.

The king and some of his court escaped along Sarn Cynfelin, one of the causeways which connected Cantre’r Gwaelod to the mainland;  and the settlement was never reclaimed.  It’s said that, on quiet Sunday mornings, the bells of the lost city still ring out from under the sea.

This enchanting legend has several variations:  in the medieval Welsh poem ‘Boddi Maes Gwyddno’ a fairy maiden forgot to close the gates and ‘let the fountain of the rough sea be poured out’;  in another version, the flooding was caused a girl called Mererid, who neglected to close the gates because she was seduced by Seithen Hen, king of an adjoining region in the Cantref.  According to one tale, ‘sixteen fine cities’ were inundated, and the king was forced to move his court to high ground in the east, making Borth his main sea port.  The well-known Welsh song ‘The Bells of Aberdyfi’, still popular today, helps to keep the story alive in Welsh hearts.

As you can imagine, successive waves of historians and researchers have tried to find tangible evidence of the lost city in the form of ruins or geographical features.  The only plausible clue lies in three ‘sarnau’ or long ridges which run at right angles to the shore, and are visible at low tide;  these may be the remnants of glacial moraines, formed when glaciers retreated at the end of the last Ice Age, but they would have offered a convenient natural access to Cantre’r Gwaelod.

In 1770, the Welsh antiquarian scholar William Owen Pugh reported seeing the remains of ‘sunken human habitations’ about four miles off the Cardigan coast;  and in 1833, in a Topographical Dictionary of Wales, Samuel Lewis noted a collection of boulders seven miles out to sea, to the west of Aberystwyth.  He called it Caer Wyddno, the fort or palace of Gwyddno.

In modern times, the remains of a submerged forest have been discovered at Ynyslas, proving that the coastline used to lie much further to the west. Low tides regularly expose stumps of oak, pine, birch, willow and hazel, embedded in a layer of peat.  Carbon dating has shown that these trees died around 3500 BC, while others, found near Borth, date from 1500 BC.

Cantre’r Gwaelod has been linked to the legendary Arthurian land of Lyonesse, also lost beneath the waves;  in his poem ‘Idylls of the King’, the Victorian poet Alfred, Lord Tennyson wrote:

A land of old upheaven from the abyss

By fire, to sink into the abyss again;

Where fragments of forgotten peoples dwelt,

And the long mountains ended in a coast

Of ever-shifting sand, and far away

The phantom circle of a moaning sea.

Apparently, there’s a similar tale in Normandy and north Brittany, where ancient texts tell of a 7th century ‘flood tide’ which made Mont St Michel into an island.

As usual, the more you read, the more compelling the story becomes, and the greater the urge to find some evidence… but sometimes the magic of a legend is best preserved in our imagination. 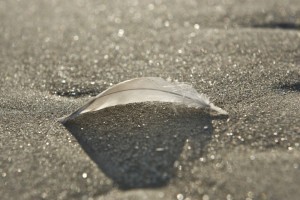 One of the lovely plants that grows here is Viola tricolor or Heartsease.  You can find out more in this post on The Hazel Tree.